Colorectal cancer (CRC) is one of the most common malignancies and is considered the third leading cause of cancer-related deaths worldwide. CRC with lymphatic invasion is one of the critical prognostic factors in lymph node metastasis (1). Given this, clarifying the molecular and cellular mechanisms underlying the process of metastasis, a major avenue of cancer research, is needed to help identify a new therapeutic target in the treatment of CRC.

It has been reported that there is a close relationship between increased lymphangiogenesis and metastatic spread in studies of other human cancers (2-6). For example, in head and neck cancers, malignant melanoma, and prostate and breast cancer, increased intratumoral or peritumoral lymphatic vessel density (LVD) has been found to be associated with metastatic spread and poorer prognosis. It has also been suggested that high LVD in CRC is associated with lymphatic metastasis and poor prognosis (5,7,8). Nevertheless, the clinical significance of intratumoral or peritumoral lymphatics in CRC remains unclear in these studies, as is the case for studies of other tumors (9).

There is still debate concerning the effect of intratumoral or peritumoral lymphatics on the progression and prognosis of different tumors (10). In pancreatic ductal adenocarcinoma, in which early lymph node metastasis is common, neither intratumoral nor peritumoral lymphangiogenesis was present or detected (11). In gastric cancer, thyroid papillary carcinoma, and squamous cell carcinoma of the head, neck, and esophagus, intratumoral LVD (LVDit) was predictive of lymphatic metastasis (12-15). Meanwhile, peritumoral LVD (LVDpt) has been associated with lymph node metastases in cutaneous melanoma, breast cancer, prostate adenocarcinoma, and uterine cervix carcinoma (3-6). However, the function of different lymphatic vessels in CRC is still elusive and controversial. Some studies have suggested that LVDit is related to tumor progression and prognosis (16,17), whereas other studies have presented conflicting results (18-20).

Thus, the aim of the present study was to detect intratumoral and peritumoral lymphangiogenesis and explore the relationship between clinicopathological parameters, including LVDit or LVDpt, lymph node metastasis, pathological stage, and prognostic factors in CRC.

We present the following article in accordance with the REMARK reporting checklist (available at http://dx.doi.org/10.21037/tcr-20-1038).

The present study involved 120 primary CRC patients who underwent surgical resection at the Department of Gastroenterological Surgery, Peking University People’s Hospital, Beijing, China, between September 2010 and April 2012. None of the patients had undergone preoperative radiotherapy and chemotherapy. Patients were followed up clinically for more than 5 years postoperatively. The time range of follow-up was 1–78 months, with an average of 53 months. All the samples were fixed using 10% formalin for 24 hours, and were then embedded with paraffin wax. After being cut into 4-µm sections, the samples were treated with hematoxylin and eosin (HE) staining and observed under a microscope by two experienced pathologists according to the criteria of the Union for International Cancer Control. This study was conducted in accordance with the Declaration of Helsinki (as revised in 2013). This research was approved by the Ethics Committee of Peking University People’s Hospital (No. 2020PBH006-01), and informed consent was taken from all the patients.

The patients’ biopsy sections were immunohistochemically stained using a streptavidin-peroxidase technique (Beijing Zhongshan Golden Bridge Biological Technology). Briefly, the embedded sections were deparaffinized in a graded series of ethanol and 100% xylene; 0.3% hydrogen peroxide in methanol was used for 10 minutes at room temperature to block endogenous peroxidase activity. After treatment with 10% normal rabbit serum for 10 minutes, sections were stained overnight with a mouse antihuman podoplanin monoclonal antibody (AngioBio) as the primary antibody at 4 °C. Each slide was incubated with antimouse immunoglobulin G antibody for 10 minutes and streptavidin-biotinylated horseradish peroxidase complex for 5 minutes. Diaminobenzidine and Mayer’s hematoxylin solution were used as a chromogen and nuclear counterstain, respectively. Phosphate-buffered saline (PBS) without a primary antibody was added for a negative control.

LVD quantification was tested as previously described (21). A microvessel was considered to be a single endothelial cell or a cluster of endothelial cells positive for podoplanin, and was located around a visible lumen, which was easily separated from adjacent microvessels and from other connective tissue components. Intratumoral lymphatic vessels were defined as those within the tumor cell islets, and peritumoral lymphatic vessels as those in the periphery within 2 mm of tumors adjacent to the invasion front. Briefly, the three most vascularized areas examined by podoplanin were primarily visualized (so-called hotspots) under a 40× field. Vessels in each of these areas were then detected under a 200× field. The mean values of three 200× field counts in this section were defined as the LVDpt or LVDit. The 120 cases were divided into two groups (LVDpt or LVDit group) in terms of the mean level of LVD.

All statistical analyses were carried out with SPSS version 22.0 software. Statistical comparisons were performed using unpaired two-tailed Student’s t-test or one-way analysis of variance (ANOVA) as appropriate. Overall survival curves were obtained by the Kaplan-Meier method, and the statistical significance of differences was evaluated by log-rank test. Univariate and multivariate analyses were carried out using the Cox proportional hazards model. Differences at P<0.05 were considered statistically significant. 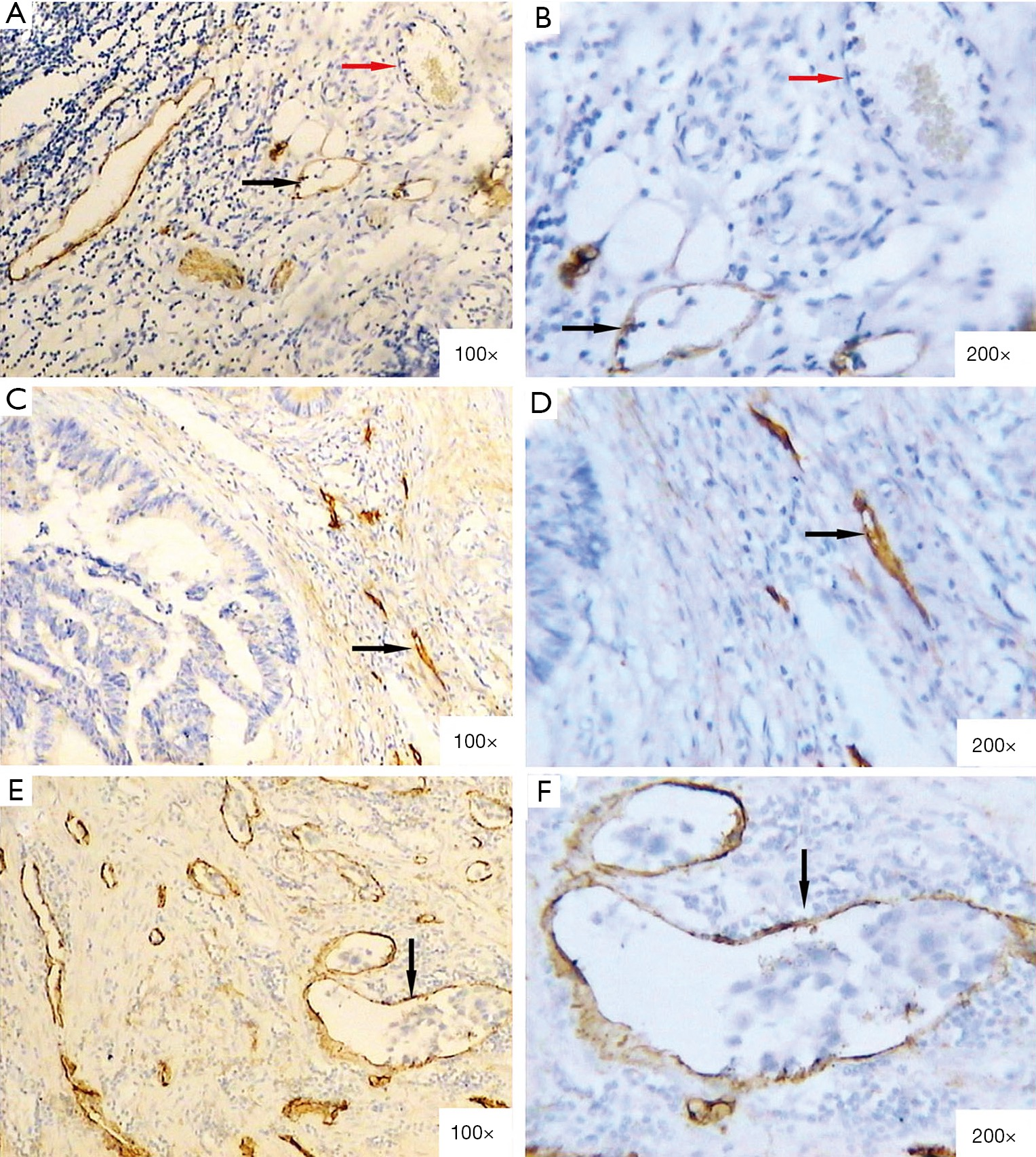 Relationship of LVDit and LVDpt with clinicopathological parameters in CRC

The correlations of LVDit and LVDpt with clinicopathological findings are summarized in Table 1. High LVDit was found to be significantly correlated with larger tumor size (P=0.009) and poor differentiation (P=0.023). In contrast, high LVDpt had a significant correlation with lymph node metastasis (P<0.001) and late tumor-node-metastasis (TNM) stage (P=0.004). No significant correlations were found between LVDit or LVDpt and other characteristics, including sex, age, tumor location, T-stage, and distant metastasis. 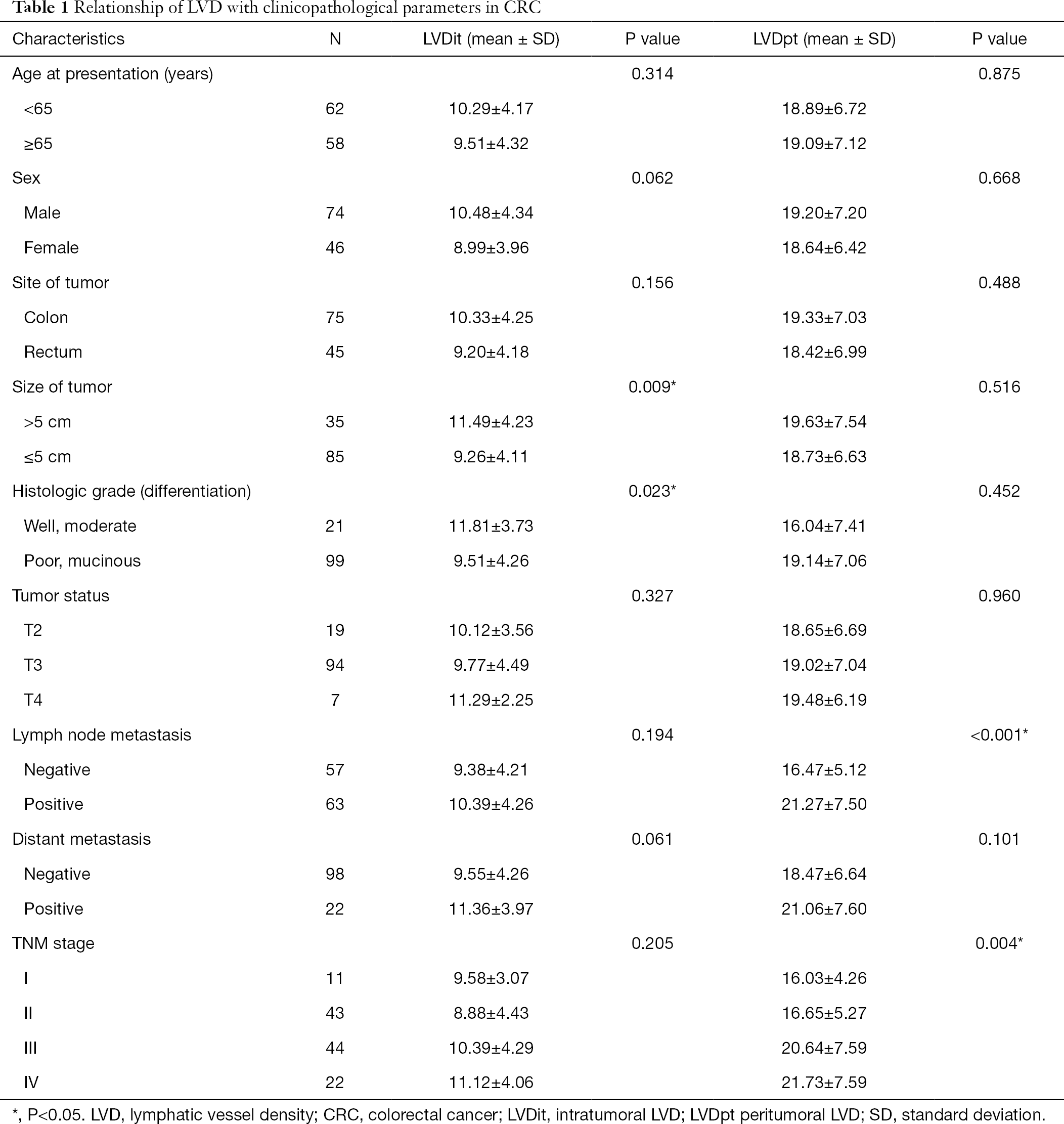 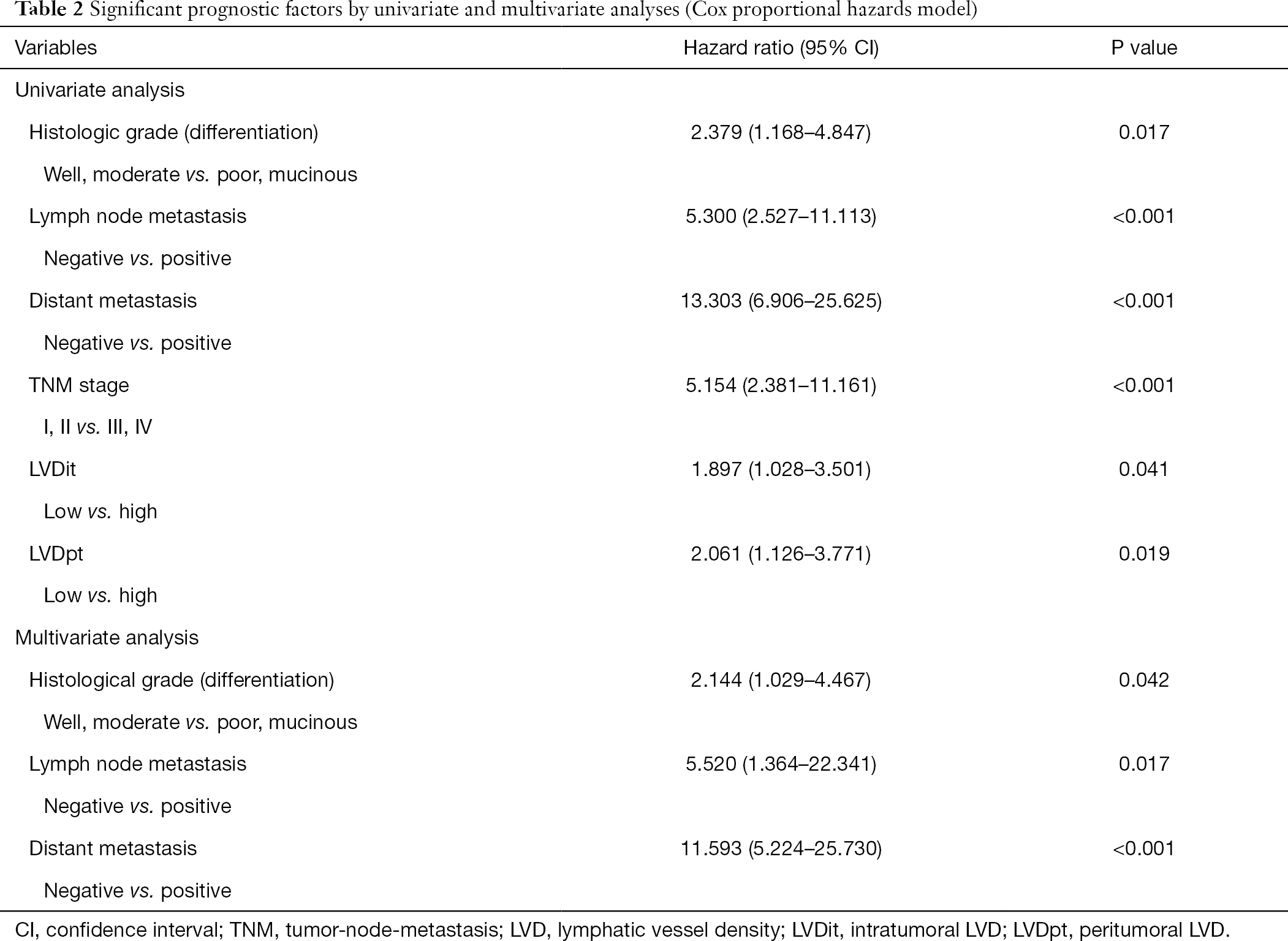 It has been well established that lymphangiogenesis can occur in and around tumors (23). However, the functional significance of intratumoral and peritumoral lymphatics involved in the pathology of tumors remains controversial. In previous reports, lymphatic vessels were detected within the intratumoral area in gastric cancer (12), thyroid papillary carcinoma (13), and squamous cell carcinoma of the head, neck, and esophagus (14,15), and LVDit was found to be significantly associated with lymph node metastasis and a poorer prognosis compared to LVDpt. However, some other studies noted that high LVDpt was predictive of lymphatic involvement and poor prognosis in cutaneous melanoma, breast cancer, prostate adenocarcinoma, and uterine cervix carcinoma (3-6). Saad et al. reported that LVDit in CRC was related to both lymph node and liver metastases (16). Barresi et al. found that lymphangiogenesis was mostly located in the peritumoral area of CRC tissues, and LVDpt, rather than LVDit, was associated with lymph node metastasis in early CRC (18). Longatto-Filho et al. noted that LVDpt was correlated with hepatic metastasis, but not lymph node metastasis, in colon cancer, although LVDpt was lower than LVDit (20). These controversial findings might the result of a selective bias and a smaller number of samples. Most studies have mainly focused on a specified group of CRC patients with either early or late TNM stage. Based on our results from 120 CRC cases, spanning all TNM stages, we found that LVDpt, rather than LVDit, was substantially associated with lymph node metastasis, suggesting that LVDpt is more important in lymph node metastasis than LVDit.

In their study, Gao et al. found no relationship between LVD and other prognostic parameters, such as survival, in CRC (24). Longatto-Filho et al. (20) noted that LVDpt was correlated with CRC poor outcome markers, but not with significantly poor survival, while Matsumoto et al. (17) suggested that LVD was an independent prognostic factor of CRC. However, none of these studies analyzed the prognostic value of LVDpt or LVDit. In the present study, the survival curves demonstrated that both LVDit and LVDpt were associated with the overall survival of patients with CRC. The significance of LVDit and LVDpt for CRC prognosis was in agreement with that for gastric cancer (25).

There were several limitations in our study. Firstly, this was a retrospective study of post-surgical samples in a local medical institution and selection bias could not be avoided as the distribution of clinical characteristics of CRC patients. The results in this study needs to be validated in multicenter institutions prospectively. Secondly, further studies are required to elucidate the mechanisms underlying tumor associated lymphangiogenesis in CRC although it is true that lymphangiogenesis plays an important role in the progression of CRC.

Funding: The present study was supported by Beijing Postdoctoral Research Foundation (grant No. 2015422-54).

Reporting Checklist: The authors have completed the REMARK reporting checklist. Available at http://dx.doi.org/10.21037/tcr-20-1038

Conflicts of Interest: All authors have completed the ICMJE uniform disclosure form (available at http://dx.doi.org/10.21037/tcr-20-1038). The authors have no conflicts of interest to declare.

Ethical Statement: The authors are accountable for all aspects of the work in ensuring that questions related to the accuracy or integrity of any part of the work are appropriately investigated and resolved. This study was conducted in accordance with the Declaration of Helsinki (as revised in 2013). This research was approved by the Ethics Committee of Peking University People’s Hospital (No. 2020PBH006-01), and informed consent was taken from all the patients.