The eighth edition of the TNM staging system has substantial revisions compared to the seventh edition staging system (12-14). In particular, the criteria for measuring tumor size were changed to measure the size of invasive components rather than the overall tumor size. Because of these changes in the staging system, it is necessary to apply a new staging system to determine the prognosis of sublobar resection at any stage of NSCLC.

The purpose of this study was to evaluate the prognosis of patients with small-sized (invasive component size ≤2 cm) stage IB NSCLC after sublobar resection. In those cases, sublobar resection was performed initially for the treatment of small (invasive component size ≤2 cm) tumors, and, postoperatively, histopathological findings revealed the presence of visceral pleural invasion. Through this research, we wanted to find out whether the additional completion lobectomy should be done immediately in such cases. We present the following article in accordance with the STROBE reporting checklist (available at http://dx.doi.org/10.21037/tcr-20-1995).

From January 2010 to December 2018, 1994 patients underwent curative resection of NSCLC at a tertiary hospital in South Korea. Of those patients, 298 patients were diagnosed as having stage IB NSCLC according to the eighth edition of TNM staging system. Patients who underwent neo-adjuvant chemotherapy or adjuvant chemotherapy were excluded from this study. Patients who had residual tumor in the lung or in the resected margins were also excluded. Patients with tumors larger than 2 cm of invasive component size who underwent sublobar resection were also excluded. To reduce the selection bias, all data were obtained from consecutive patient data. Finally, 227 consecutive patients were reviewed retrospectively. The patients were divided into two groups: the sublobar resection group (n=21) and the lobectomy group (n=206). The sublobar resection group included only tumors ≤2 cm of invasive component size. The clinicopathological characteristics were analyzed in the two groups. The comparison of prognosis was conducted in the two groups. We also conducted a study comparing the prognosis of sublobar resection and lobectomy in tumors ≤2 cm of invasive component size. The study was conducted in accordance with the Declaration of Helsinki (as revised in 2013). This study was approved by the institutional review board of Seoul St. Mary’s Hospital at the Catholic University of Korea (referral number: KC20RASI0020) and individual consent was waived in this retrospective study.

Patients diagnosed with clinical stage I lung cancer on chest CT scan and combination positron emission tomography (PET) and CT scan were eligible for surgical treatment. The treatment of choice for stage I NSCLC is lobectomy with mediastinal lymph node dissection. However, in patients with GGO or small solid peripheral nodules near the visceral pleura, sublobar resection is also considered. The surgical procedure was selected depending on the surgeon’s preference or the patient’s decision, and in the case of high-risk patients with cardiopulmonary disease, sublobar resection was usually performed. Sublobar resection consists of wedge resection and segmentectomy. In most cases, a sufficient resection margin was obtained, in which the margin length was greater than the tumor diameter.

All pathology slides and pathology reports were reviewed. Pathology reports included tumor size, tumor location, nodal status, pleural invasion, lymphatic invasion, and vascular invasion. Visceral pleural invasion was defined as a tumor extending beyond the elastic layer. Lymphatic invasion or vascular invasion was defined as tumor cells present in the lymphatic vessel or vascular lumen. TNM staging was based on the eighth edition of the TNM staging system of lung cancer (14). To reclassify the T category according to the eighth edition, tumor size was remeasured by the pathologist at the greatest diameter of the invasive component on a histopathological preparation (13). Cases where the invasive component size was ≤2 cm were defined as small-sized NSCLC.

The clinicopathological characteristics of the sublobar resection group and lobectomy group were compared. A Student t-test or Wilcoxon rank-sum test was used for continuous variables, and the χ2 test or Fisher exact test was applied for categorical variables. The Kaplan-Meier method was used to analyze data collected from the interval between the time of operation and the time of the last follow-up visit. Recurrence-free survival (RFS) rates and overall survival (OS) rates were estimated by the Kaplan-Meier method. Survival of each group was compared by log-rank test. The Cox proportional hazards model was used in a multivariate analysis to determine the risk factor of recurrence and death for all the study patients. The variables with a P value <0.1 by univariate analysis were entered into a multivariate analysis. A P value <0.05 was considered statistically significant.

Comparison of sublobar resection and lobectomy in all study patients 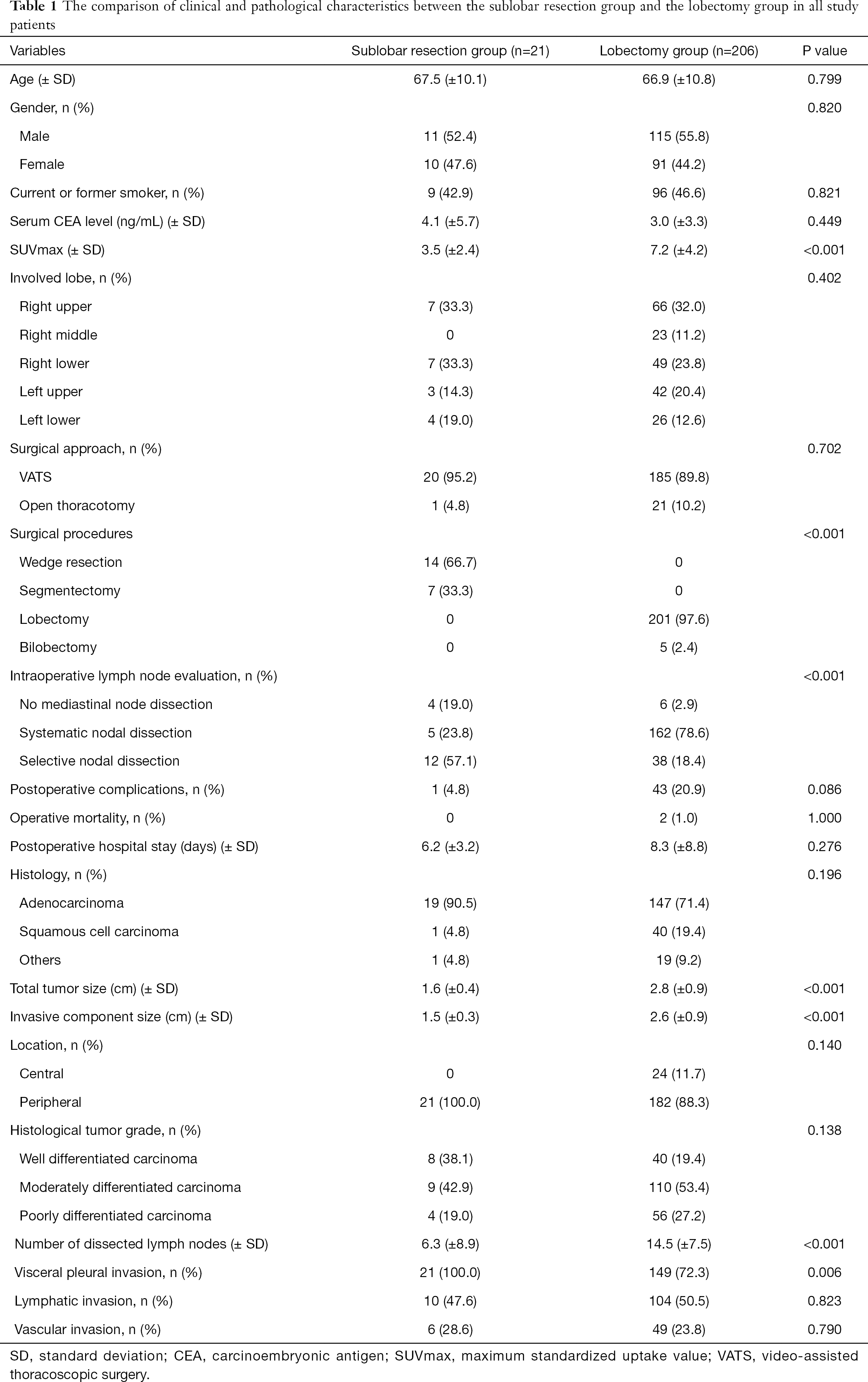 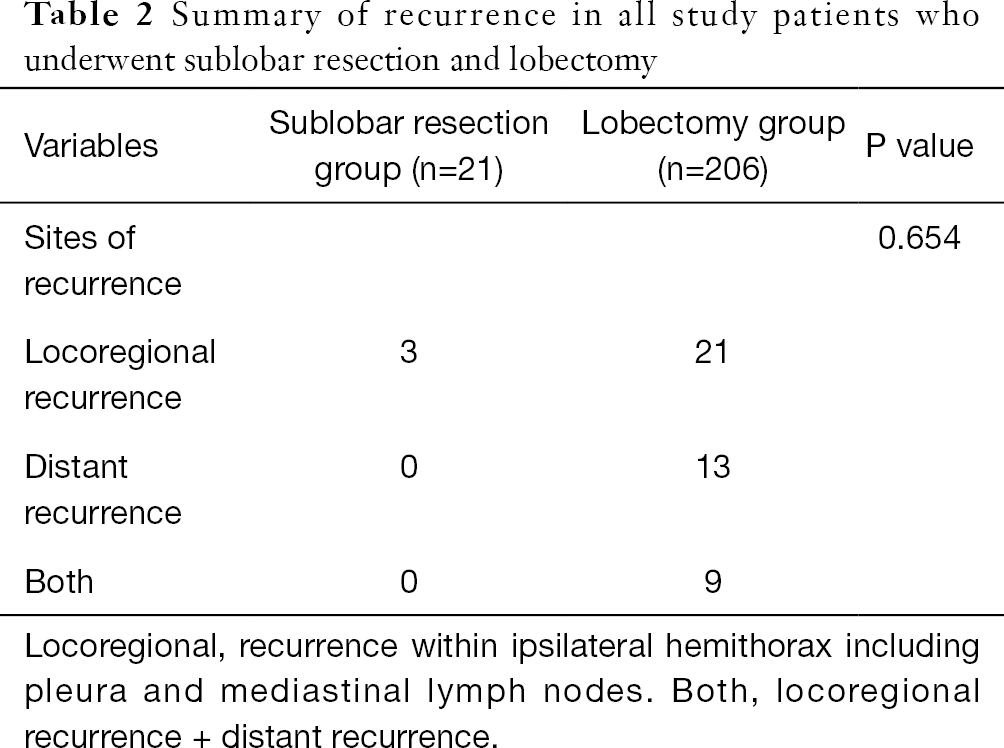 Figure 1 Comparisons of (A) RFS and (B) OS between the sublobar resection group and the lobectomy group in all study groups. RFS, recurrence-free survival; OS, overall survival. 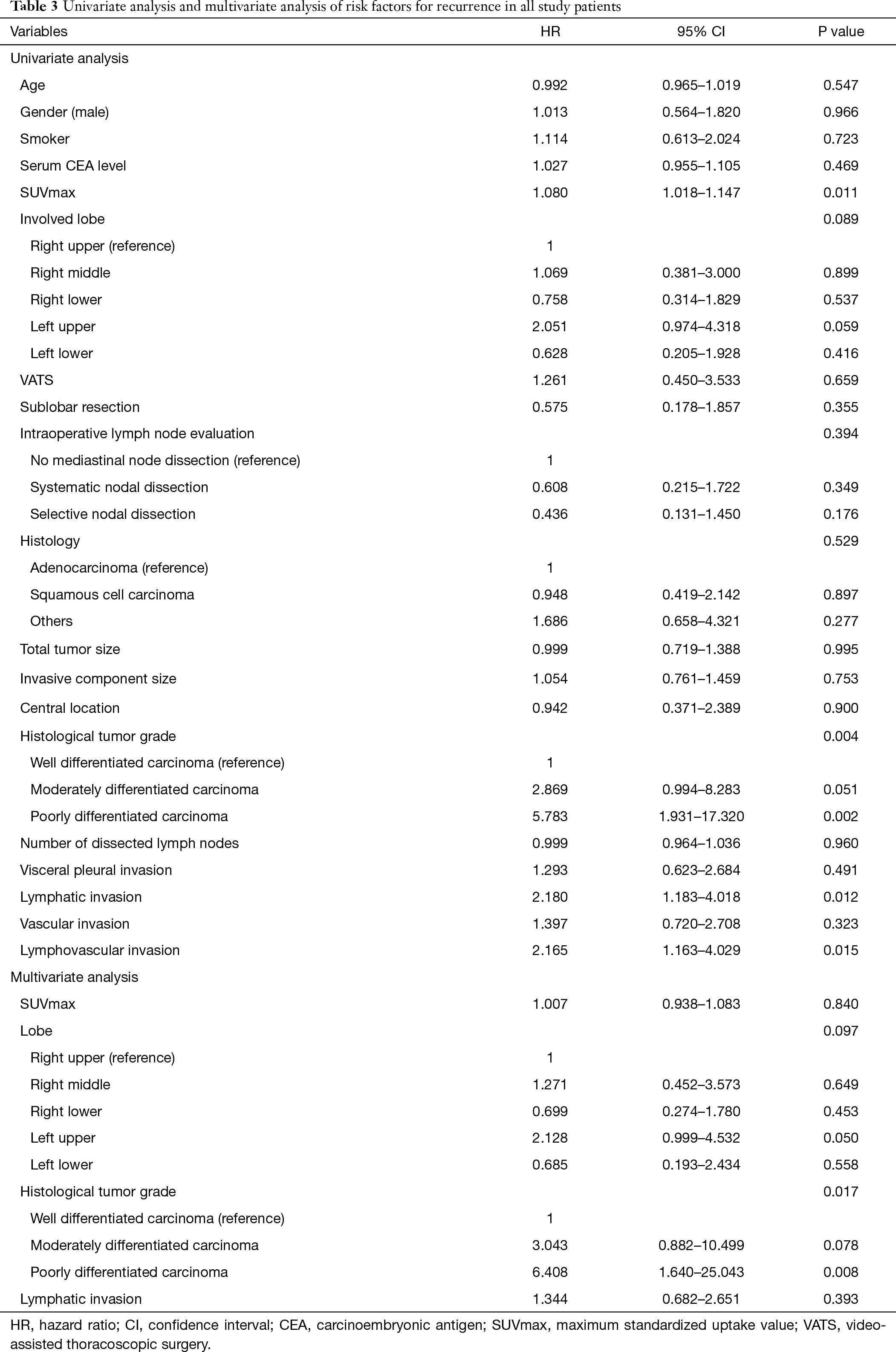 Of all study patients, 84 patients had small-sized (invasive component size ≤2 cm) stage IB NSCLC. We compared the prognosis of sublobar resection and lobectomy in the same size group. Table 5 shows the comparison of clinical and pathological characteristics between the sublobar resection group and the lobectomy group. There was no statistical difference in clinical and pathological characteristics between the two groups. 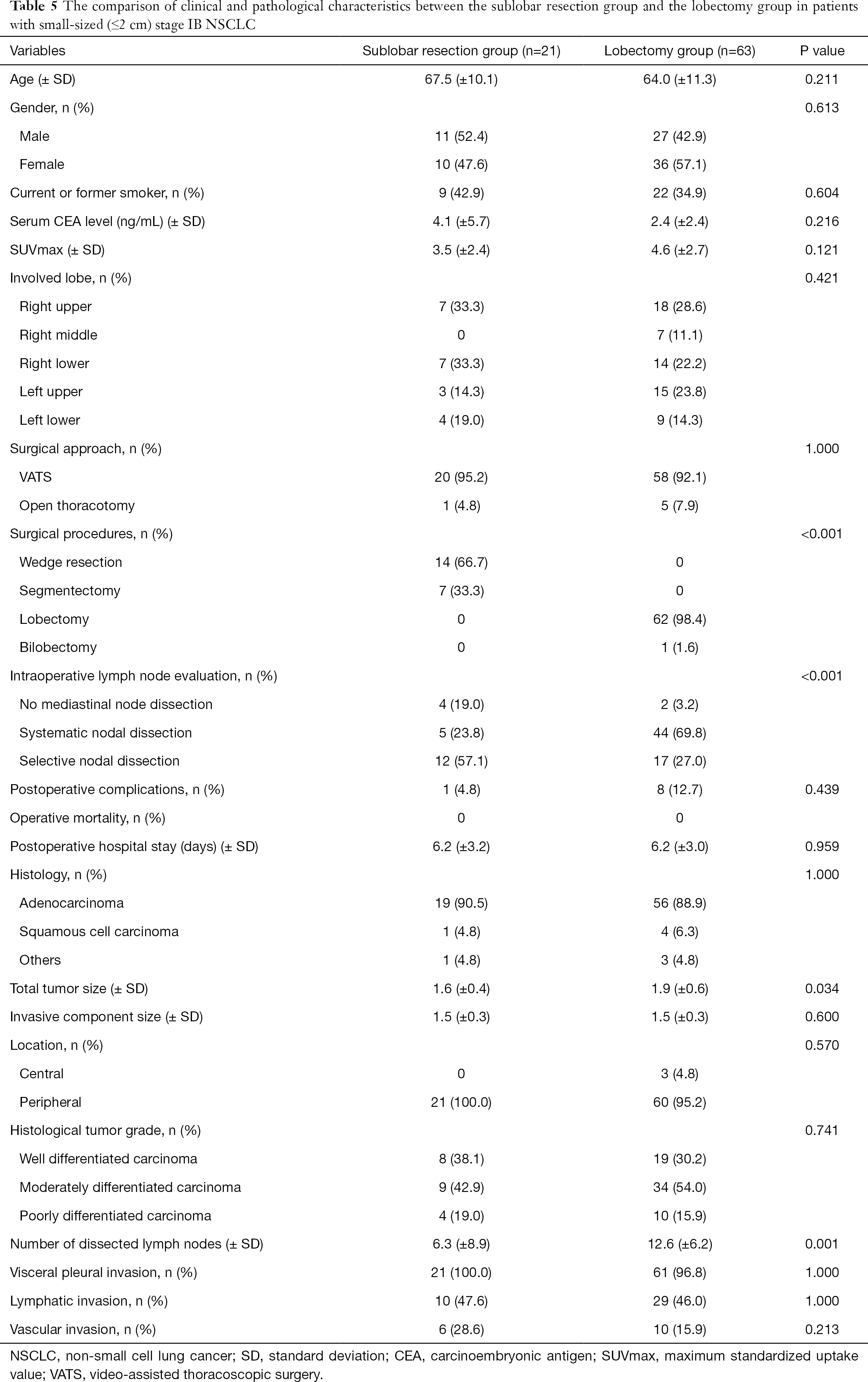 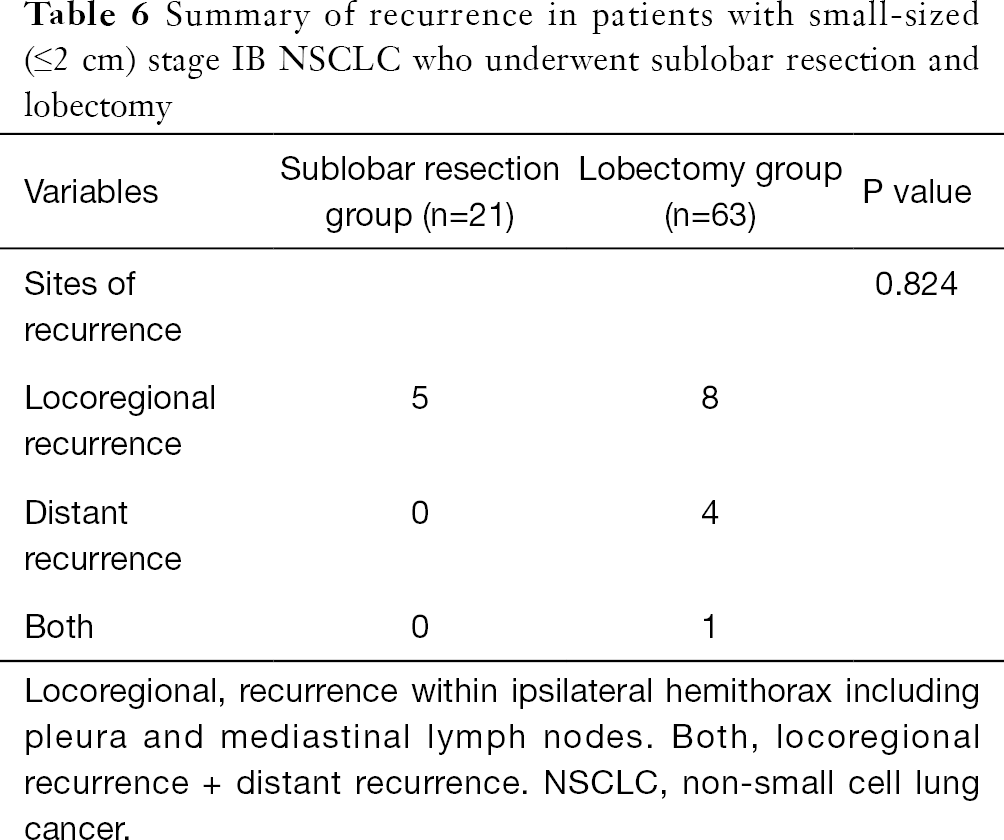 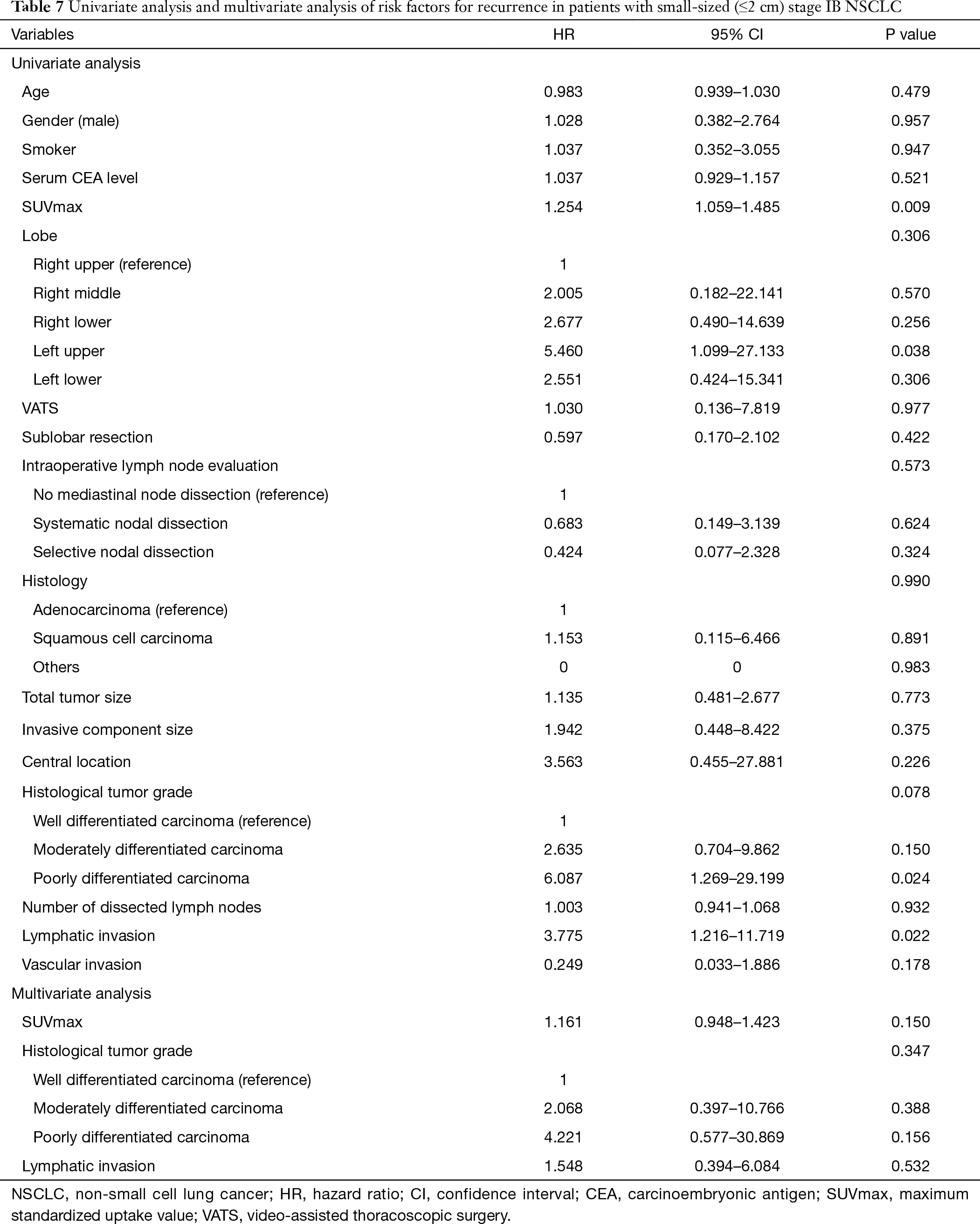 After implementation of the eighth revision of the TNM classification of NSCLC, the composition of the tumors included in the stage IB classification was changed. Most importantly, the requirement for measuring tumor size was changed. Determination of the T stage in the eighth revision is based only on the maximum dimension of the invasive component and excludes the lepidic component (13,15). The size range of the T2a descriptor was also reduced from 3 to 5 cm to 3 to 4 cm. Therefore, the tumor characteristics for the seventh edition stage IB NSCLC were changed in the eighth edition. Because of these changes, we thought that if the stage-based postoperative prognosis is studied, in all cases it is necessary to restudy after applying the eighth edition of TNM staging. This study is also the first to study the prognosis of sublobar resection of stage IB by applying the eighth edition of the TNM staging system.

This study has a few limitations. First, it was a retrospective review. Second, we obtained data from a single institution, and the sample size was relatively small from which to generalize our results. However, this study examined data from surgical patients treated with a standardized protocol at an institution, a tertiary hospital in Korea. Furthermore, a very detailed analysis was possible because of the comprehensive information stored in the electronic medical record. We also had no problem applying the new staging system using pathology slides. We believe that our data will be useful as the basis for future investigations. A prospective randomized controlled study should be performed to validate our results. Finally, patients with a short follow-up period were included in this study. However, most patients with NSCLC are known to have disease recurrence within a 2-year postoperative period (20), and early recurrence has been shown to be an accurate reflection of long-term outcomes (21).

In conclusion, the prognosis of sublobar resection in patients with small-sized (≤2 cm) stage IB NSCLC was comparable with lobectomy. Thus, additional completion lobectomy is not essential in this setting, despite postoperative upstaging from T1 to T2a. Further research through multicenter randomized controlled trials may more accurately depict patient outcomes.

Funding: This work was supported by the National Research Foundation of Korea (NRF) grant funded by the Korea government (MSIT) (No. 2019R1G1A1099670).

Reporting Checklist: The authors have completed the STROBE reporting checklist. Available at http://dx.doi.org/10.21037/tcr-20-1995

Conflicts of Interest: All authors have completed the ICMJE uniform disclosure form (available at http://dx.doi.org/10.21037/tcr-20-1995). Dr. YM reports grans from National Research Foundation of Korea (NRF), during the conduct of the study. The other authors have no conflicts of interest to declare.

Ethical Statement: The authors are accountable for all aspects of the work in ensuring that questions related to the accuracy or integrity of any part of the work are appropriately investigated and resolved. The study was conducted in accordance with the Declaration of Helsinki (as revised in 2013). This study was approved by the institutional review board of Seoul St. Mary’s Hospital at the Catholic University of Korea and individual consent was waived (referral number: KC20RASI0020).