Breast cancer is the most frequent type of carcinoma and the second most common cause of death from carcinomas in women (1-3). Prognostic variables for breast cancer have traditionally included node status, histological grade, tumor size, hormone receptor (HR) status, and human epidermal growth factor receptor 2 (HER2) expression. Numerous studies have suggested that nodal involvement is the most crucial prognostic parameter, and play a pivotal role in instructing treatment (4,5). In 2000, Perou et al. identified breast tumor cells that shared gene expression patterns and clustered it into four subtypes: luminal epithelial/estrogen receptor (ER) positive, normal-breast-like, basal-like, and/or cells with over-expression of the human epidermal growth factor receptor 2 (HER2) gene (6). Previous studies reported that molecular subtypes are associated with different risks of early disease recurrence, metastases, and survival (7-9). Although nodal involvement and molecular subtypes are both independently well-recognized prognostic indicators, it remains unclear whether there is an association between these two factors (10,11). He et al. have reported that triple-negative breast cancer is associated with a reduced risk of nodal involvement compared to other subtypes (12). A study by Liao et al. revealed significant differences in overall survival (OS) according to the node status in luminal A, luminal B, and luminal HER2 subtypes, and with recurrence-free survival (RFS) in the luminal B and luminal HER2 subtypes after adjustments for age and tumor size (13). Thus, it can be seen that node status is associated with molecular subtypes in outcomes, and nodal involvement may not always be an independent risk factor for some molecular subtypes. To address this, we retrospectively investigated the effect of the node status on the 5-year disease-free survival (DFS) and breast cancer-specific survival (BCSS) with different molecular subtypes of breast cancer. We present the following article in accordance with the STROBE reporting checklist (available at http://dx.doi.org/10.21037/tcr-20-1117).

We retrospectively reviewed the medical records of breast cancer patients with stages I to III disease [American Joint Committee on Cancer (AJCC) staging, 7th edition] treated from 2004 to 2011 in the Affiliated Quanzhou First Hospital of Fujian Medical University. We excluded 49 patients who had either had a previous diagnosis of malignant tumor or who were missing follow-up information. The study was conducted in accordance with the Declaration of Helsinki (as revised in 2013). The study was approved by Affiliated Union Hospital of Fujian Medical University Ethics committee (No. 002934) and informed consent was taken from all the patients. The demographics and clinicopathological information from their medical records were regrouped and are given in Table 1.

Node status was defined by TNM classification as proposed by the American Joint Committee on Cancer for grouping patients with respect to prognosis. Categorizing the number of metastatic lymph nodes into N0 (0), N1 (≤3), N2 (4 to 9), and N3 (≥10) groups, and the N0 group acted as the reference group. The ER and PR expression were assessed using immunohistochemical (IHC) staining. An ER expression of more than 1% was considered positive, and expression of more than 20% for PR was classified as high expression. HER2 positivity was defined as a 3+ staining intensity score at IHC analysis for the HER2 protein or for HER2 gene amplification by fluorescence in situ hybridization (FISH) (14). According to the reported from Cheang et al. (15), we defined expression of 14% or greater as a high Ki-67 level and less than 14% as a low level of expression. If Ki-67 results are not available, the grade can be used as a surrogate for the molecular subtypes (16). According to the St. Gallen International Breast Cancer Conference (2013 or 2015), we identified the following molecular subtypes; luminal A (ER positive and PR high, HER2 negative and Ki-67 low expression or low/intermediate grade), luminal B (ER positive and HER2 negative and either PR low or Ki-67 high or high grade), luminal HER2 (ER positive and HER2 positive), HER2 (ER negative, PR negative and HER2 positive), and triple-negative (TN; ER negative, PR negative, and HER2 negative) (17,18).

Statistical analysis was performed using SPSS version 22.0 (IBM Corporation, New York, USA). Univariate and multivariate analyses of breast cancer survival comprising the patient’s age, tumor size, histologic grade, Ki-67, and molecular subtype were performed. Furthermore, we conducted Multivariable Cox proportional hazards regression with adjustments, including age, tumor size, and histologic grade, to estimate the hazard ratios (HR) and 95% confidence interval (CI) for the relationship between node status and 5-year DFS or 5-year BCSS within each molecular subtype. The DFS was defined by the date of primary diagnosis to any case of recurrence (local-regional, contralateral breast or distant) or death. We calculated BCSS from the time of diagnose to death from breast cancer. All statistical tests were two-sided, and P values <0.05 were considered statistically significant. 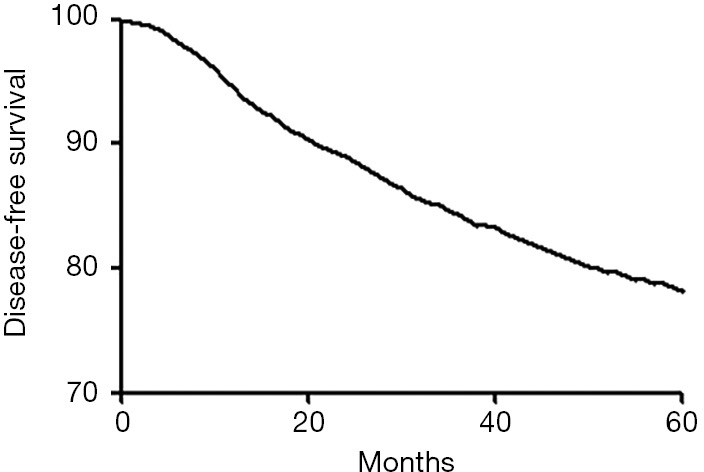 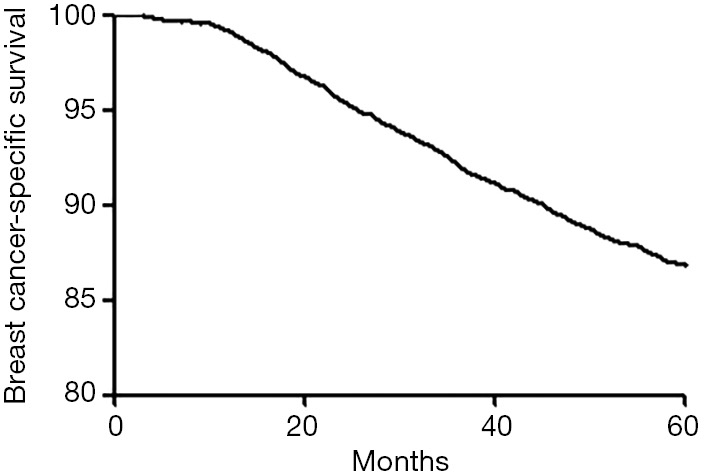 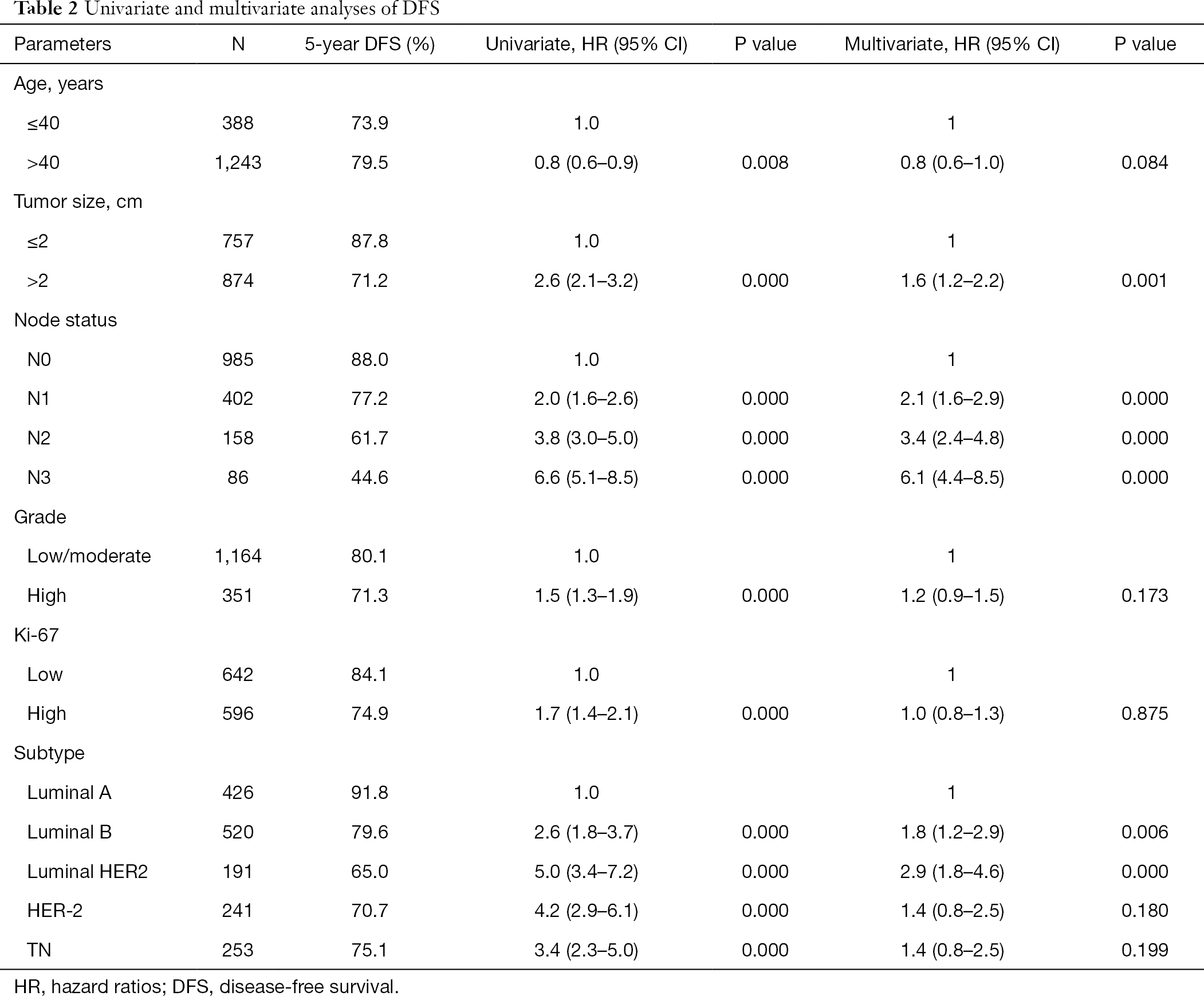 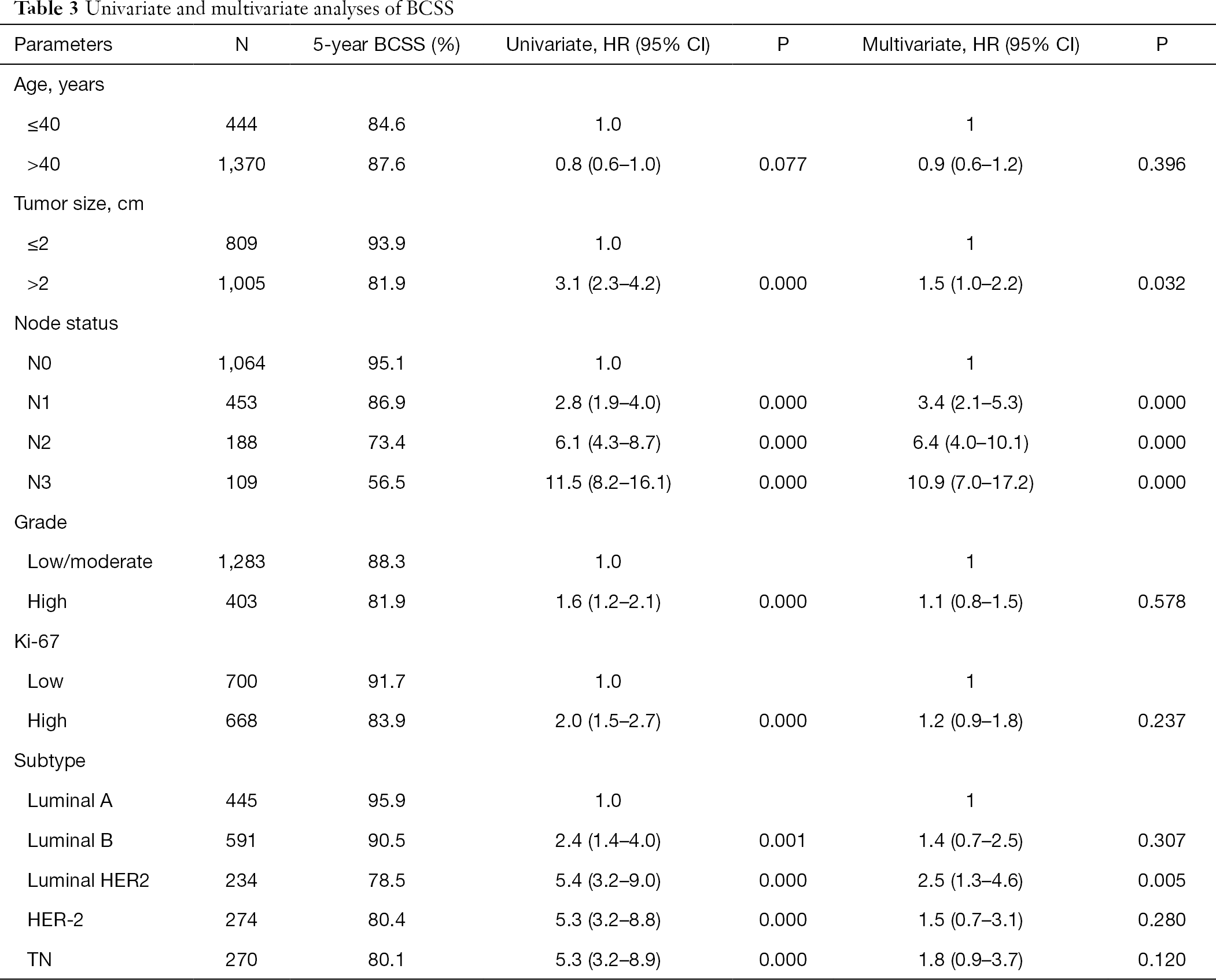 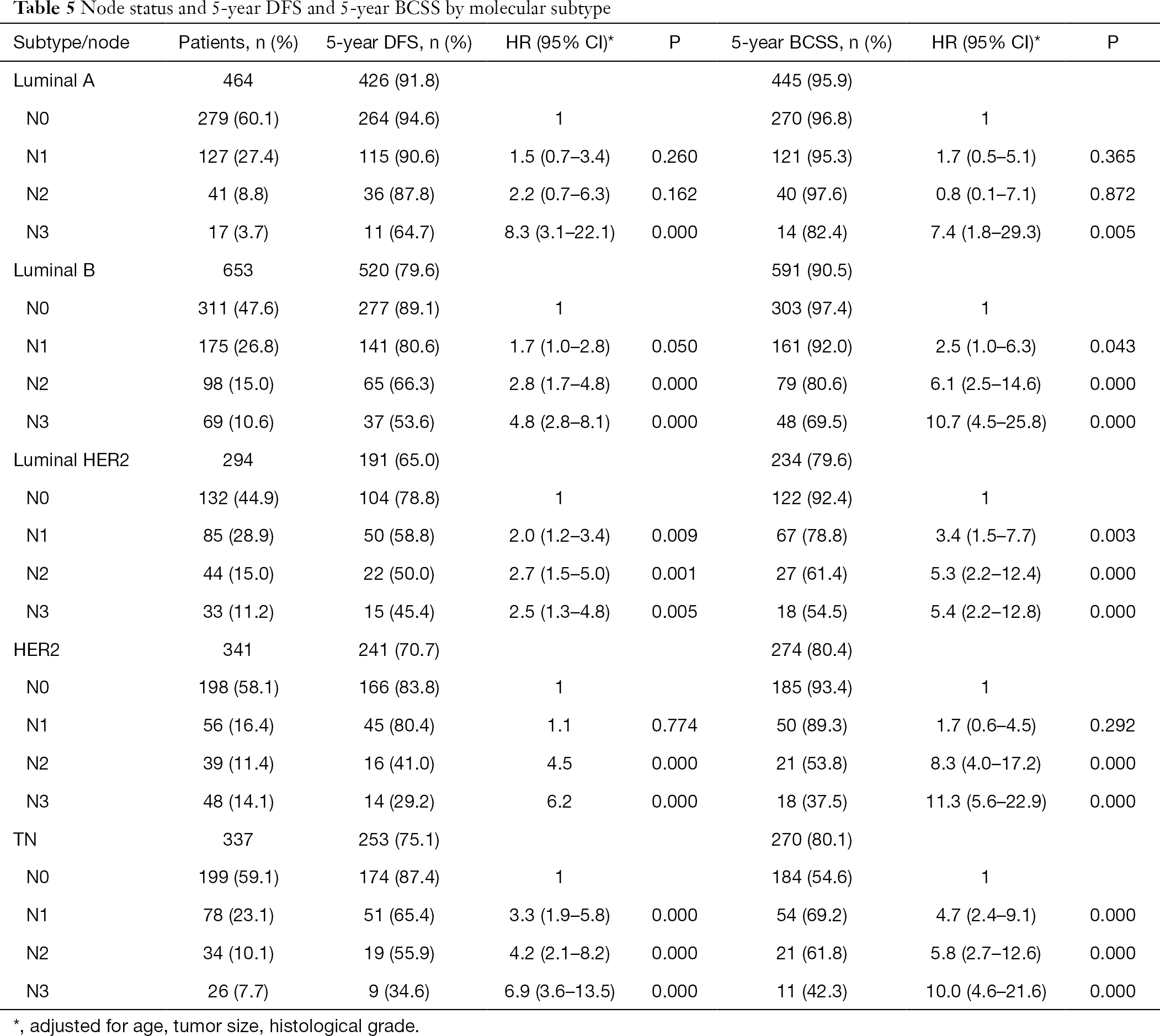 Several studies have reported that nodal involvement may be an independent prognostic parameter which is associated with a poor prognosis (19-21). However, there are limited published studies on this topic that evaluate the impact of node status on prognosis by molecular subtype in women with early breast cancer. Hence, we used a large cohort of cases obtained from 2,089 women with breast cancer to conduct a retrospective study. We found that nodal involvement is an independent predictors of the 5-year DFS or 5-year BCSS in patients with breast cancer. Even when adjustments were made for patient age, tumor size, grade, Ki-67, and subtypes, a multivariate analysis showed that lymph node involvement implies a worse 5-year DFS and 5-year BCSS, which is consistent with the report by Ataseven et al. (19). Similarly, Liao et al. reported that a higher positive number of lymph nodes was associated with an inferior 5-year OS (13). On the face of it, nodal involvement and a higher number of positive nodes does increase the risk of survival (20,21).

For women with HER2 breast cancer, our data indicates that there was no clear decreased risk of BCSS and DFS for the N1 group compared with the N0 group when controlling for other conventional prognostic factors. Several large clinical trials have reported that 1 year of treatment with trastuzumab after adjuvant chemotherapy significantly improves DFS or overall survival among women with node-positive and high-risk node-negative HER2positive breast cancer (28,29). A randomized controlled trial reported that women with lymph node involvement benefit more from trastuzumab compared with node negative patients (30). These studies suggested that the N1 group with HER2 subtype benefit more from trastuzumab than the N0 group, and trastuzumab treatment may help to cancel out the survival difference from different degrees of lymph node involvement. Furthermore, there was a certain proportion of the N0 group who were HER2 positive who cannot accept trastuzumab for economic reasons. So, it seems that the N0 with HER2 patients who were not treated with trastuzumab had a similar prognosis to the N1 group; despite not receiving trastuzumab they did not do worse. Theoretically, nodal involvement could be an independent prognostic factor among the HER2 subtype if more N0 patients accepted treatment with trastuzumab.

Our results support that the relationship between node status and DFS or BCSS varies with molecular subtype. After controlling for other prognostic factors, we observed that there was no significant difference in survival with luminal A subtype between patients with the involvement of less than 10 lymph node and lymph node negative patients, although nodal involvement seem to be an independent predictor of a worse prognosis for patients with luminal B, luminal HER2, and triple negative subtypes. Certainly, there are several limitations to our study. First, this is a retrospective single-institution study and all patients enrolled were Chinese women and results may not apply to other ethnic population with breast cancer. The second limitation of this study was an insufficient study population and follow-up. Furthermore, the information about adjuvant therapy was lacking. However, to the best of our knowledge, this study is one of the largest similar studies reported to date.

The prognostic significance of node status varies with molecular subtype. Nodal involvement seems to be associated with worse survival in women with the luminal B, luminal HER2, and triple-negative subtypes, but not in the luminal A disease.

Funding: This work was supported by grants from the Science and Technology Programme of Quanzhou (2018N073S).

Reporting Checklist: The authors have completed the STROBE reporting checklist. Available at http://dx.doi.org/10.21037/tcr-20-1117

Conflicts of Interest: All authors have completed the ICMJE uniform disclosure form (available at http://dx.doi.org/10.21037/tcr-20-1117). The authors have no conflicts of interest to declare.

Ethical Statement: The authors are accountable for all aspects of the work in ensuring that questions related to the accuracy or integrity of any part of the work are appropriately investigated and resolved. All methods were carried out in accordance with relevant guidelines and regulations. The study was conducted in accordance with the Declaration of Helsinki (as revised in 2013). The study was approved by Affiliated Union Hospital of Fujian Medical University Ethics committee (No. 002934) and informed consent was taken from all the patients.