About 50% cancer patients develop acute kidney injure (AKI) and most of them require renal replacement therapy (RRT) in the intensive care unit (ICU) (1,2). AKI in these patients usually resulted from cancer itself (acute tumor lysis syndrome, urinary tract obstruction) and anticancer treatments (drug-induced nephropathy, major surgical procedures associated severe clinical complications such as ischemia, sepsis) (1-4). More and more cancer patients have opportunities to choose surgical therapy with the improvement of surgical techniques and neoadjuvant therapy (such as chemotherapy, radiotherapy before operation). Previous literature demonstrated the incidence of postoperative AKI varies from 1.1% to 17% (5-7), depending on the type of surgery. Postoperative AKI (especially in need of RRT) is a major cause of short-term mortality among surgical patients (8). There is few literature on the prognosis for critically ill cancer patients undergoing continuous renal replacement therapy (CRRT) with no-cardiac postoperative AKI (1,9-11).

Historically, the presence of malignant disease had been a common reason for refusal of admission to ICU because of poor prognosis and high costs, especially those cancer patients with organ failure. We performed this study to investigate the 28-day survive of critically ill cancer patients undergoing CRRT with postoperative AKI, which may help make cancer-related prognosis judgments and make corresponding clinical decisions. We present the following article in accordance with the STROBE reporting checklist (available at http://dx.doi.org/10.21037/tcr-20-1324).

This retrospective study was conducted in the ICU of Cancer Hospital, Chinese Academy of Medical Sciences from January 2010 to January 2019. The ICU is a 12-bed unit (mainly to treat critical ill cancer patients after surgery). The study was conducted in accordance with the Declaration of Helsinki (as revised in 2013). The ethics committees in our hospital approved the study (No. NCC2020C-162) and the need for informed consent was waived because there was no interference with decisions related to patient’s care.

Definition and decision for CRRT

These patients were proved malignant neoplasm pathologically. All patients enrolled were classified as stage 3 [Kidney Disease: Improving Global Outcomes (KDIGO)] (increase in serum CRE by 3.0 times baseline; or increase in serum CRE to 353.6 mol/L; or urine output <0.3 mL/kg/h for ≥24 hours; or anuria for ≥12 hours) according to 2012 KDIGO before the start of CRRT (12). Shock was defined as systolic blood pressure <90 or 40 mmHg lower than basic blood pressure for more than 1 hour in need of vasoactive drugs. Respiratory failure was defined as PaO2/FiO2 ratio <300 mmHg or they were in need of mechanical ventilation (MV). SOFA score was based on six different scores, one each for the respiratory, cardiovascular, hepatic, coagulation, renal and neurological systems, extent of a patient’s organ function as one to four (13). SAPS III was calculated based on guidelines provided by the SAPS III outcomes research group. Scores are generated using variables separated into three categories, all of which are available at time of admission (14).

Decision for CRRT was based on one (or more) of the following characteristics: uremia >33.2 mmol/L, hyperkalemia >6.5 mmol/L, severe metabolic acidosis (pH <7.20), clinical features of water overload, oliguria (urine output <0.3 mg/kg/h for ≥24 hours) after completely fluid resuscitation.

Continuous variables were expressed as median and interquartile range (IQR). Patients were followed up until the time of death or the point of 28-day after ICU admission. Twenty-eight-day survival probability was estimated by the Kaplan-Meier methods. Log-rank tests were used to compare 28-day survival probability between groups. Variables yielding P values <0.05 by univariate analysis and those considered clinically relevant were entered into the multivariate cox regression analysis. Results of multivariate analysis was summarized by estimating hazards ratios (HRs) and respective 95% confidence intervals (CIs). P value <0.05 was considered statistically significant. Statistical analyses were carried out with SPSS for Windows, version 19.0 (SPSS Inc., Chicago, IL, USA).

Clinical characteristics of the study population

A total of 86 cancer patients with postoperative AKI-stage 3 treated with CRRT in the ICU were enrolled into our study. The median age was 61 (range: 27–82) years. The ratio of male to female patients was 2.58:1. The median SOFA score was 6 [1–19] and the SAPS III was 65 [49–109]. The causes for ICU admissions were divided into three categories, 16 (18.6%) patients presented with respiratory failure, 23 (26.7%) patients with shock and 48 (55.8%) patients with acute renal dysfunction. The percentage of digestive tract cancer (esophagus, stomach, colon, hepatobiliary, pancreas) and lung cancer were 68.6% and 11.6%, respectively. The remaining 19.8% of enrolled patients were other types of cancer (brain, head and neck, gynecology). Sixty-seven (77.9%) patients were presented with localized tumors and underwent a completely resection, whereas 19 (22.1%) patients were accompanied with distant metastasis and accepted palliative resection. Twenty patients were under the thoracic surgery, 59 patients were operated abdomen surgery. The remaining seven patients underwent head or neck or gynecology surgery. The median operation duration was 180 [50–100] minutes. Of 86 patients, 19 individuals were administrated with regimens of doxorubicin and ifosfamide, with or without dacarbazine. Three patients underwent 40–76 Gy of radiotherapy to primary and/or recurrent lesions within the last 90 days before operation. The number of comorbidities with diabetes, hypertensions, coronary heart diseases was 16, 35, and 12, respectively. At the start of CRRT, 49 (57.0%) patients required vasopressors including 40 sepsis shock patients and nine ischemia shock patients. Fifty-three (61.6%) patients was given MV because of respiratory failure. The MV duration was 3 [1–10] days overall. All patients enrolled received rehabilitation and general medicine services. 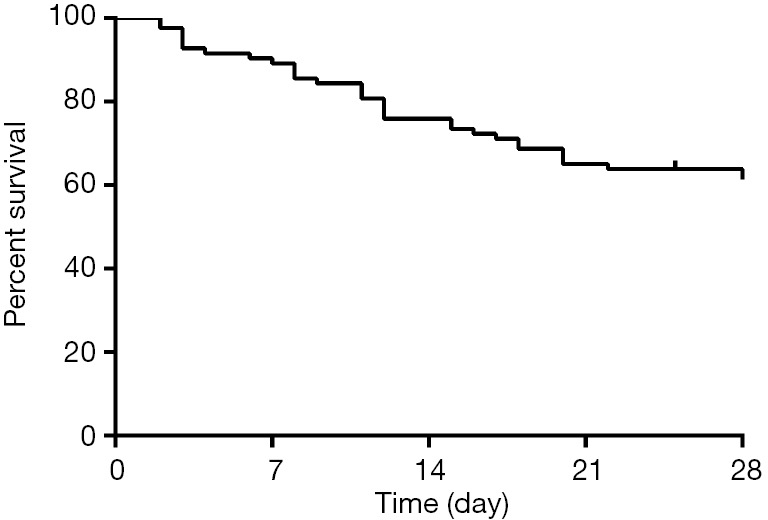 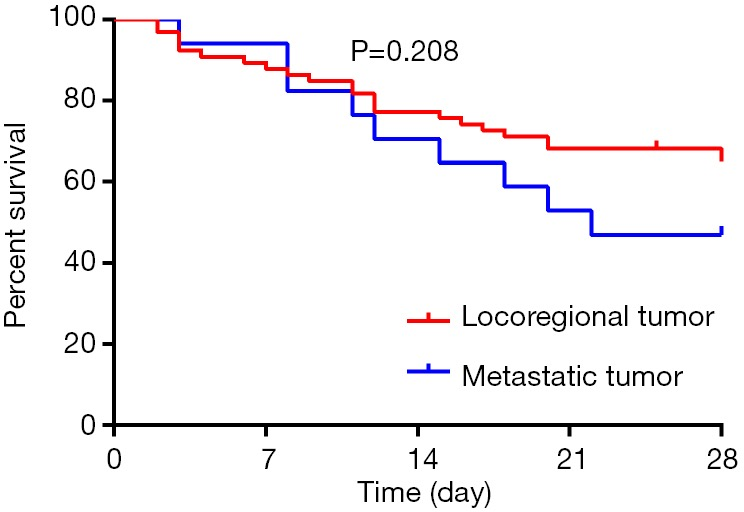 Figure 2 The survival rate of patients with locoregional tumor and metastatic tumor showed no significance within 28 days (P=0.208) 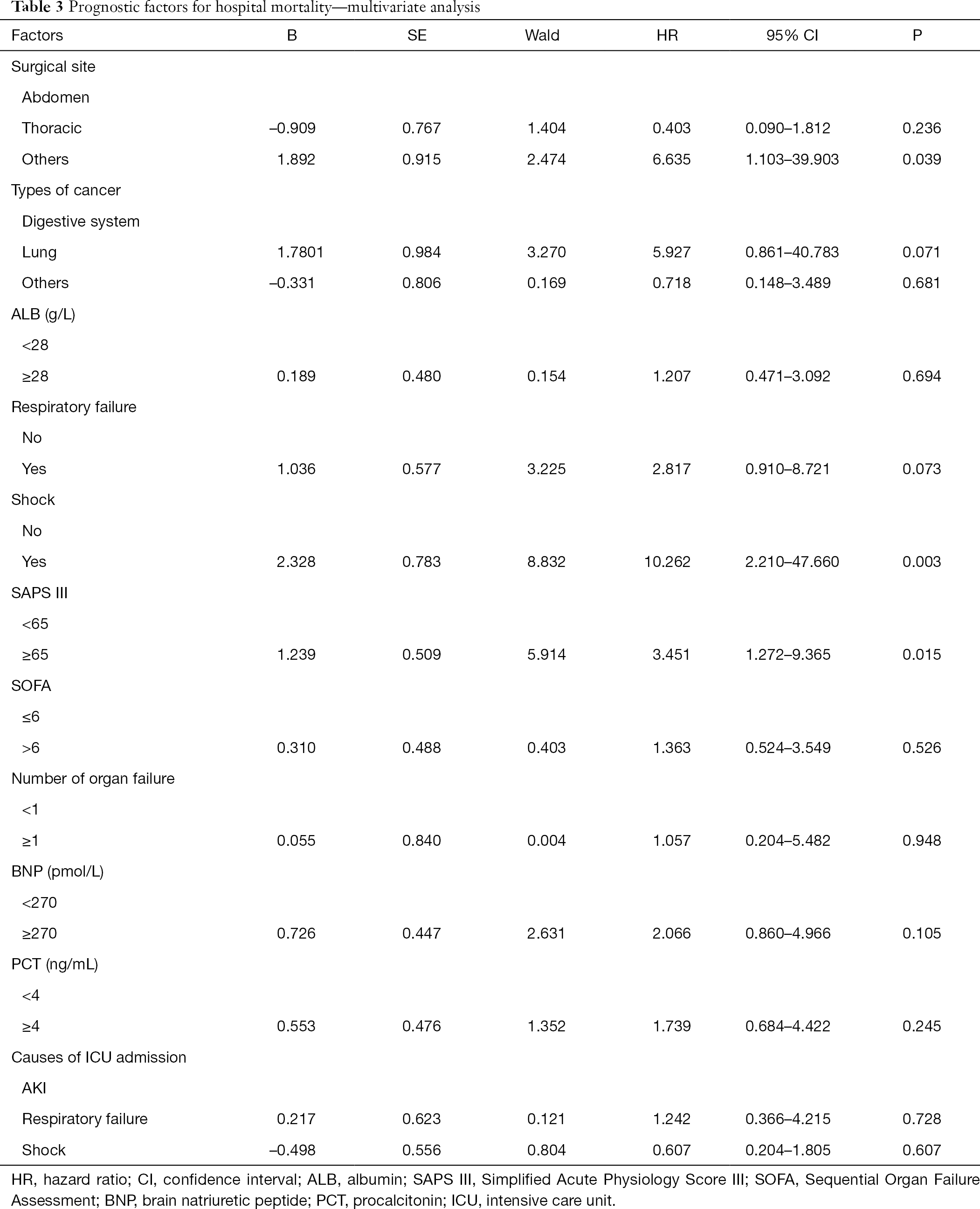 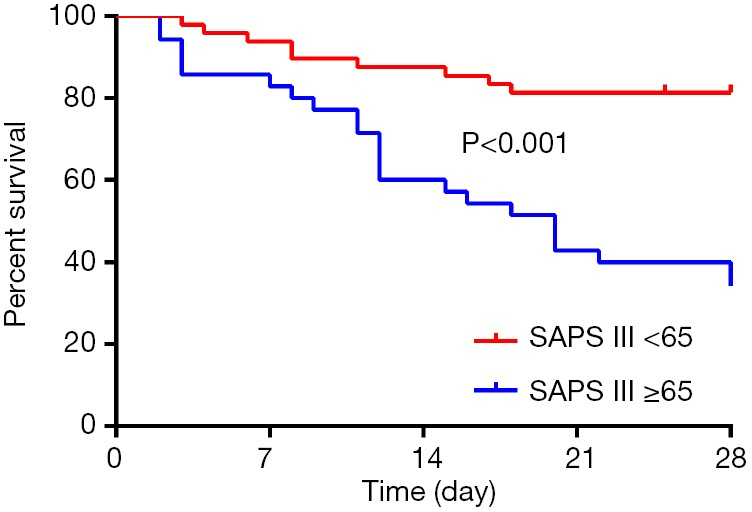 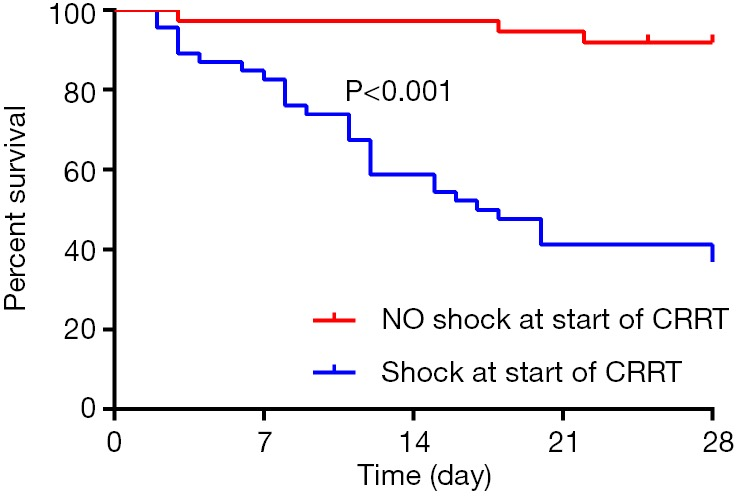 Figure 4 The survival rate of patients with or without shock at start of CRRT showed significance within 28 days (P<0.001). CRRT, continuous renal replacement therapy.

AKI has been reported to occur in 5–7% of hospitalized patients, but it accounts for up to 20% of admissions in ICU (7). It is a common postoperative complication (15) defined by a sudden decline in the kidney function, ranging from subclinical AKI to AKI patients receiving RRT (16,17). Despite improvements in the general management of ICU patients with cancer, AKI worsens the prognosis. In patients with cancer requiring CRRT, hospital mortality rates are reported between 51% and 90% (18,19). The difference of the short-term survive may be partly attributed to the difference between solid tumors and hematological tumors. In our study, the 28-day survival rate was 57.1%±5.8%, which is higher than previous research.

RRT is an effective therapy for AKI-stage three patients to date. The KDIGO criteria advocates to start RRT when water overload becomes life-threatening or sever imbalances (such as hyperkalemia >6.5 mmol/L, severe metabolic acidosis and uremia) occur (4). Historically, it remains controversial to start CRRT for AKI in critically ill patients with cancer because of the poor outcome and high costs (6,18,20-23). The rate of AKI in patients admitted to a comprehensive cancer center was higher than the rate in most noncancer settings (24). In most previous study performed in cancer patients admitted for medical complications in the ICU, the cancer characteristics were not predictive factors for hospital mortality (25). Benoit conducted a prospective cohort study in 14 ICUs from three tertiary care hospitals and founded that in general ICUs, the presence of cancer was not independently associated with hospital mortality (26). In our study, the types of cancer affected 28-day survive by univariate analysis (P=0.012), however none of the cancer status (P=0.076), neoadjuvant therapy associated with cancer (P=0.949), the types of cancer (P>0.05 for both) was a prognostic factor of 28-day survive by multivariate analysis. As previously reported, short-term survive was linked to acute physiological changes induced by the complications leading to ICU admission while cancer characteristics influenced significantly survival after hospital discharge (27,28). When evaluating prognosis and the appropriateness of CRRT in these patients, cancer characteristics were not important variables to take into consideration.

Shock is often routinely considered as a poor prognostic factor. In our study, 49 patients developed shock including 40 sepsis shock and nine ischemia shock at the start of CRRT. The presence of shock at the time of the initiation of CRRT [HR: 10.262 (2.210–47.660), P=0.003] independently affecting the 28-day-survive. Our finding was consistent with previous studies. Maccariello et al. (29) conducted an analysis of 150 patients and found patients with AKI in need of vasopressors to be associated with higher hospital mortality [odds ratio (OR): 3.58 (1.08–11.80)]. Another retrospective study conducted by Kim et al. (3), which included 4,718 patients with gastric cancer who underwent partial or total gastrectomy for gastric cancer between June 2002 and December 2011, reported that vasopressor usage was associated with a high 3-month mortality in patients with postoperative AKI.

A predictive model for short-term survive in AKI patients requiring CRRT may help clinicians’ therapeutic decision-making. Sequential assessment of organ dysfunction during the first few days of ICU admission is a good indicator of prognosis (13). A single-center study conducted in a cancer-specialized ICU in Brazil reported that hospital mortality was 86.8% for AKI patients (KDIGO stage 3). SOFA and SAPS III were independent factors for mortality in this population by logistic regression analysis (30). In our study, we accepted the score of SOFA and SAPS III within the first 24 hours of admission to assess the criticality of patients. The SAPS III calculated within the first 24 hours of admission was significantly (P<0.001) related to 28-day survive when the SAPS III was higher than 65.

PCT is a polypeptide composed of 116 amino acids synthesized by parafollicular cells of the thyroid and the neuroendocrine cells of the lung and the intestine. It is a promising sepsis marker (31) which is suggestive of sepsis (32). Many previous studies have found that PCT levels in survivors were lower than that in non-survivors (33,34). But PCT is not an early biomarker for prognosis in septic patients because that renal function is an important determinant of PCT levels and thus different thresholds should be applied according to the renal function impairment (35). TnT is higher than normal in a large percentage of patients with acute heart failure, indicating the presence of myocardial damage and is a good independent predictor of 1-year mortality (36). BNP is known to relate with the dysfunction of the cardiovascular system (37). Previous studies have also reported the use of BNP for the assessment of volume status in critically ill patients. Elevated BNP concentrations at admission in the setting of acute coronary syndrome are associated with poor prognosis (38). There is a wealth of data on their significance as poor prognostic factors. In the present study, the concentration of PCT (P<0.001) and BNP (P<0.001) affected the 28-day survive by univariate analysis. However, none of the three was independent prognostic factors for 28-day survive.

Our study has some shortcomings. Firstly, it is a single-center, retrospective study. The type of tumor has not been further subdivided into organs and even histopathology. Secondly, when studying the impact of tumor properties on prognosis, due to the limitation of oncology hospitals, non-tumor patients could not be selected for comparison. Thirdly, due to the low incidence and long case span, previous support measures were limited, which may affect the prognosis.

Reporting Checklist: The authors have completed the STROBE reporting checklist. Available at http://dx.doi.org/10.21037/tcr-20-1324

Conﬂicts of Interest: All authors have completed the ICMJE uniform disclosure form (available at http://dx.doi.org/10.21037/tcr-20-1324). The authors have no conflicts of interest to declare.

Ethical Statement: The authors are accountable for all aspects of the work in ensuring that questions related to the accuracy or integrity of any part of the work are appropriately investigated and resolved. The study was conducted in accordance with the Declaration of Helsinki (as revised in 2013). The ethics committees in our hospital approved the study (No. NCC2020C-162) and the need for informed consent was waived because there was no interference with decisions related to patient’s care.