Incidence of thyroid cancer increased rapidly worldwide in recent years, which is mainly due to early detection of thyroid nodules by imaging tools like ultrasonography (1,2). Generally, when the diagnosis of thyroid cancer is established, surgery will be recommended, although active surveillance has been proposed as an alternative option for well-differentiated small volume thyroid cancer recently (2).

Regional lymph node metastases (LNM) are usually considered to a significant unfavorable factor for the prognosis for most malignant tumors, and unfortunately, are present in a large proportion of patients with thyroid cancer at the time of diagnosis (3,4). However, the clinical significance of LNM and the necessity of neck dissection in thyroid cancer is still controversial (2,5). The excellent outcomes of differentiated thyroid cancer observed have been argued more likely to be related to the indolent nature of the disease rather than to the effectiveness of treatment (2,6-8). The value of routine prophylactic central neck dissection for such patients are conflicting, especially for small and noninvasive papillary thyroid cancer (PTC) (2,9).

On one hand, in several studies, prophylactic dissection has shown no improvement in long-term patient outcome, while increasing the likelihood of temporary morbidity (2,3,10). On the other hand, cervical LNM have been demonstrated in several studies to be associated with regional thyroid cancer recurrence and survival, and neck dissection is associated with better survival and a lower recurrence rate (2,11). One study found that LNM significantly predicted poor overall survival outcome (12). Another study identified cervical LNM as an independent risk of decreased survival in older PTC patients (13).

There is accumulating evidence that Hashimoto’s thyroiditis (HT) is associated with increased risk of thyroid cancer (14-16). While the role of HT in LNM in patients with thyroid cancer remains conflicting (15,17,18). Although HT has been reported for not influencing the risk of recurrence in patients with PTC (19), there are also several studies demonstrated that HT is associated with less aggressiveness and tend to be a protective factor for LNM (20-22). At the same time, however, there are also reports that HT adversely affect the outcome of thyroid cancer, especially on the central LNM (23-25).

Thyroid peroxidase antibody (TPOAb) and thyroglobulin antibody (TgAb) are markers of immune response and important clinical markers for the diagnosis of HT. The cellular induced damage is considered to be associated with the development and possibly the progress of LNM of thyroid cancer (26,27). Positive TgAb has been demonstrated to be significantly associated with LNM (23). In another study (16), TPOAb or TgAb positivity was found to be associated with more metastatic cervical lymph nodes, while combined TPOAb and TgAb positivity and single TgAb positivity were both demonstrated to be related to less distant metastasis.

The discrepancy of the previous studies might be due in part to the complexity of the role of TPOAb and TgAb in the development of HT (27). Identification of risk and protect factors of LNM will be both be helpful in the management of thyroid nodules. Therefore, the following study was undertaken to analyze the impact of high thyroid antibody levels on LNM of thyroid cancer. We present the following article in accordance with the STROBE reporting checklist (available at http://dx.doi.org/10.21037/tcr-20-1941).

The medical records of 2,352 consecutive patients who committed total or hemi thyroidectomy for thyroid diseases in our hospital, from the 1st of January 2018 to the 31st of December 2018, were retrospectively analyzed. Preoperative neck ultrasound, TgAb, TPOAb, and thyroid stimulating hormone (TSH), and postoperative routine pathologic examination were performed for all patients. For suspected thyroid cancer patients, surgery was based on preoperative neck ultrasound and fine-needle aspiration cytology results. Prophylactic central neck dissection was performed for almost all patients diagnosed with thyroid cancer, while only patients confirmed lateral neck LNM received lateral neck dissection. The histopathology analysis was done according to the World Health Organization Classification of Thyroid Tumors.

Patients with no available data of TPOAb or TgAb (n=1,251) were excluded and the rest patients diagnosed with thyroid cancer (n=806) were included into the study pool and then further grouped according to TPOAb and TgAb levels: (I) TPOAb−/TgAb− (control, n=493), (II) TPOAb+/TgAb− (n=96), (III) TPOAb−/TgAb+ (n=104), and (IV) TPOAb+/TgAb+ (n=113) (Figure 1). TPOAb+ and TgAb+ was defined as serum TPOAb levels >34 IU/mL, and TgAb levels >115 IU/mL, respectively. The demographic and clinicopathological data of multifocality, tumor size, extrathyroidal invasion and lymph node metastasis were analyzed. All procedures performed in studies involving human participants were in accordance with the 1964 Helsinki declaration and its later amendments. The study protocol was reviewed and approved by the research ethics committee of our institution (202003). Patients’ hospital records were evaluated without identification of individual patients and the authors guarantee the preservation of data and the confidentiality of the material obtained, so an informed consent did not apply for this study.

Categorical variables are presented as counts and percentages. Chi-square tests and Fisher’s exact tests were utilized when appropriate. Continuous variables were presented as means ± standard deviations, and independent t tests were performed to compare the differences. Logistic regression analysis was performed to identify risk and protect factors of LNM of thyroid cancer. Variables with a P<0.100 in the univariate analysis were considered significant and were included in the subsequent multivariate analysis. A 2-sided P value <0.05 represented statistically significant difference. All statistical analyses were performed using SPSS 19.0 statistics software (SPSS Inc, Chicago, Illinois).

What’s more, no significant difference was observed for PTC percentage or total thyroidectomy committed between TPOAb+ and/or TgAb+ patients and control patients (all P>0.05).

According to the final pathology, there were no significant differences for tumor size (mean: 8.46–9.06 vs. 9.47 cm) or multifocality (all P>0.05), although tumor size in TPOAb+ and/or TgAb+ groups tend to be smaller compared to control. But, significantly less extrathyroidal invasions were identified in TPOAb−/TgAb+ group in comparison to control group (0.9% vs. 6.0%, P<0.001, Table 2).

To analysis the impact of TPOAb+ and/or TgAb+ status on LNM in patients with thyroid cancer, gender(male), age (≥55 years), TSH, TPOAb (>34 IU/mL), and TgAb (>115 IU/mL) were all subjected for univariate logistic regression analyses. What’s more, TPOAb (>500 IU/mL) and TgAb (>1,000 IU/mL) were also empirically included to examine the effect of extremely high levels of thyroid antibodies on LNM of thyroid cancer. 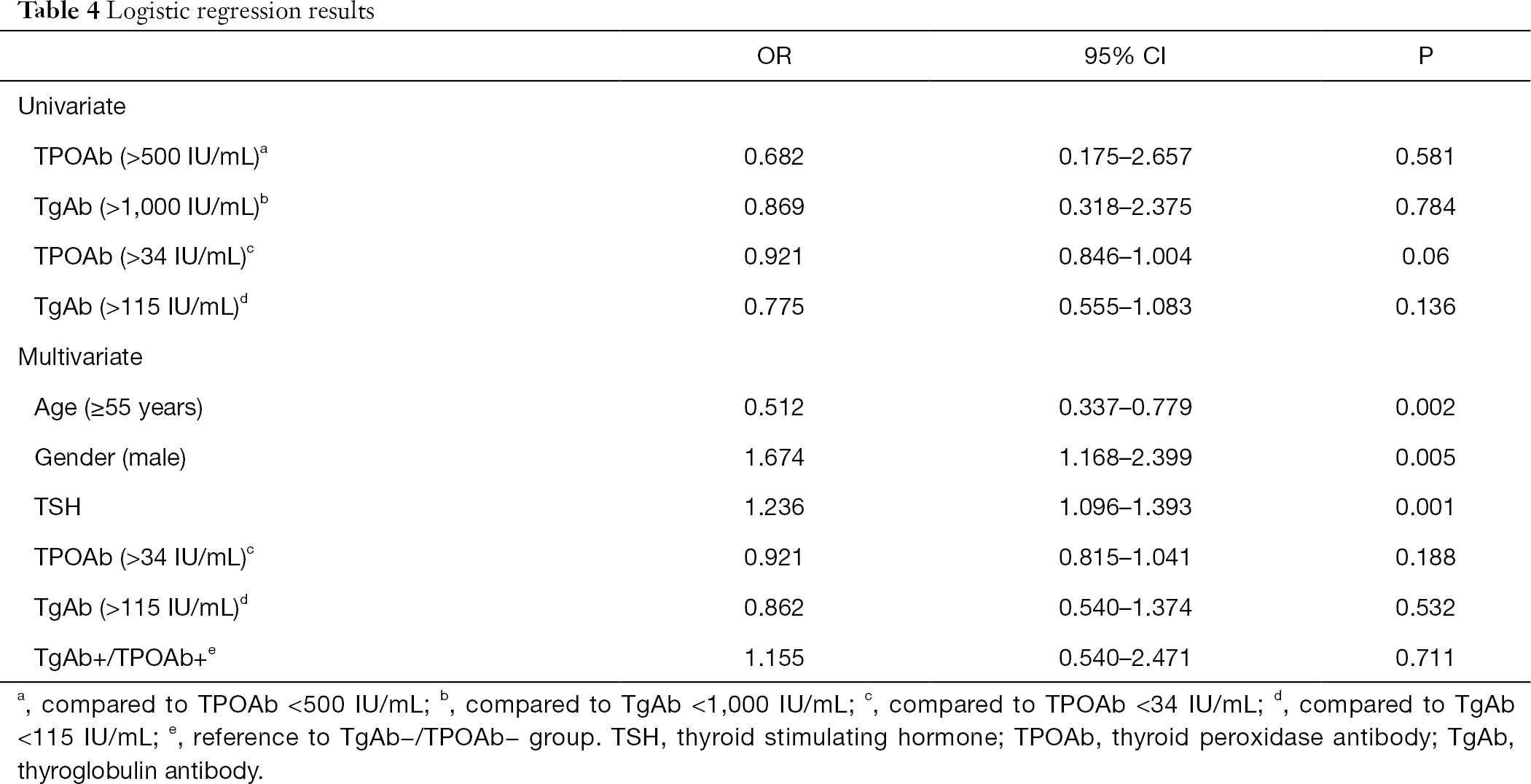 The present study focused on and thoroughly evaluated the impact of different statuses of TPOAb+ and/or TgAb+ on LNM of thyroid cancer. In this study, we demonstrated that although TPOAb+ and/or TgAb+ status tends to protect thyroid cancer from aggressive behaviors, especially for LNM, there were no significance detected for almost all indexes evaluated. It’s not clear yet whether increasing the size of the sample will yield statistical significance, but the results of this study suggests that thyroid antibody status exerts insignificant effect on lymph node metastasis of thyroid cancer.

HT is the most prevalent autoimmune disorder characterized by the destruction of thyroid follicles caused by lymphocytes and antibody-mediated immune processes, usually accompanied by goiter and hypothyroidism (26,28). Most previous studies on HT and thyroid cancer are based on results of histology, which has been recognized as the gold standard of diagnosis (14,16). Unfortunately, histology can only be acquired by surgical removal of the thyroid gland and so that the risk of LNM cannot be evaluated preoperatively. What’s more, the role of TPOAb and TgAb is not completely consistent in the development of HT, and probably different as for the impact of on LNM of thyroid cancer (26,28).

So, in the present study, we examined the effect of different statuses of preoperative thyroid autoantibody, TPOAb+ and/or TgAb+, on LNM of thyroid cancer. TPOAb+ and/or TgAb+ status affect mainly young and female patients, which is consistent with previous studies based on histology results (16,29). HT is a well-known for self-destruction of the thyroid gland, and may lead to hypothyroidism. In the present study, serum levels of TSH tend to be higher in TPOAb+ and/or TgAb+ groups, but no significance could be found. It may be due to the small number of populations studied or may also be due to thyroid hormone replacement therapy HT patients preoperatively received. Interestingly, compared to control, serum levels of TPOAb were significantly higher of TPOAb−/TgAb+ group than control group, although they were expected to be equal. Similarly, serum levels of TgAb were significantly higher in TPOAb+/TgAb− group B1 which suggests that there could a potential influence of each other between TPOAb and TgAb.

There are accumulating data suggesting that HT is associated with multifocality and bilaterality in thyroid cancer (14,23,25,30,31). Consistent with most previous studies (16,21), significantly less extrathyroidal invasions were identified in TPOAb+/TgAb- group. But in our study, no significant differences for multifocality, tumor size, or total thyroidectomy committed could be found between the TPOAb+ and/or TgAb+ groups and control group, which is consistent to the study of Wen et al. (27).

Adhami et al. demonstrated that even detectable TgAb significantly increase the risk of LNM in PTC patients (24). Song et al. reported that positive preoperative TPOAb independently lowered the risk for structural persistent/recurrent disease in PTC (32). TPOAb are also found to be associated with the absence of distant metastases in patients with newly diagnosed breast cancer (33). Lee et al. (17) suggested that diffuse lymphocytic infiltration was associated with aggressive features in PTC when TPOAb was negative, but tend to be indolent when TPOAb was positive. However, in the present study, both univariate and multivariate Logistic Regression analyses failed to identify the effect of TPOAb+ and/or TgAb+ status, or even extremely high levels of TPOAb or TgAb, on LNM of thyroid cancer.

Although Shen et al. (16) studied the impact of different status of high levels of TPOAb/TgAb on LNM of thyroid cancer, the population of patients they studied are limited to those subjected to radioiodine therapy. Wen et al. (27) classified patients into four groups based on thyroid antibody status, and identified TPOAb and TgAb double negative and TPOAb and TgAb double positive both as independent risk factors for central LNM in PTC, however, as it may not be reasonable to set TPOAb positive as reference.

The retrospective design of the study, patient’s selection bias and relatively small sample size. Larger prospective studies are needed to confirm results of the present study.

Reporting Checklist: The authors have completed the STROBE reporting checklist. Available at http://dx.doi.org/10.21037/tcr-20-1941

Conflicts of Interest: All authors have completed the ICMJE uniform disclosure form (available at http://dx.doi.org/10.21037/tcr-20-1941). The authors have no conflicts of interest to declare.

Ethical Statement: The authors are accountable for all aspects of the work in ensuring that questions related to the accuracy or integrity of any part of the work are appropriately investigated and resolved. All procedures performed in studies involving human participants were in accordance with the 1964 Helsinki declaration and its later amendments. The study protocol was reviewed and approved by the research ethics committee of our institution (202003). Patients’ hospital records were evaluated without identification of individual patients and the authors guarantee the preservation of data and the confidentiality of the material obtained, so an informed consent did not apply for this study.