In 2008, there were 914,000 new cases and 258,000 deaths from prostate cancer (PCa), making it the second most commonly diagnosed cancer in men (1). Despite advances in the treatment of PCa, there is no perfect effective therapy for cancer recurrence and distant metastasis (1). Therefore, it is necessary to explore the mechanisms underlying the progression and formation of distant metastases in PCa patients to promote the development of therapeutic strategies for PCa.

Metformin is an inexpensive and commonly used oral drug for diabetes mellitus. Recently, multiple studies have shown that metformin might not only reduce cancer risk but also improve cancer prognosis (2). Metformin might exert its anti-neoplastic properties via the following mechanisms: activation of AMPK; targeted damage to P53-deficient cells; downregulation of Cyclin D1 and inhibition of C-myc (3-5).

Most mortality in PCa patients is caused by metastasis. Increasing studies have revealed that epithelial-mesenchymal transition (EMT) participates in the process of tumorigenesis, metastasis, relapse and drug resistance in various kinds of cancers (6-11). EMT is characterized by the loss of the epithelial phenotype and acquisition of mesenchymal characteristics, which endow benign tumors with malignant properties and promote cancer progression to more invasive and metastatic types (6,12,13).

Tumor necrosis factor-α (TNF-α) is an inflammatory mediator which plays a pivotal role in inflammation-associated cancer (14). A high dose of TNF-α has anti-neoplastic properties and has even been used as a cytotoxic agent. However, exposure to chronic low-level TNF-α endows cancer cells with more aggressive behaviors, such as increased growth, invasion and metastasis (14). TNF-α has been shown to promote the EMT process in various cancers, including PCa, via the NF-κB signaling pathway or a GSK3β-dependent mechanism (15-20).

Recently, reports (21,22) showed that metformin decreased PCa mortality, increased PCa sensitivity to treatment, and delayed the development of castration-resistant prostate cancer (CRPC) in PCa patients. Metformin inhibited pro-neoplastic inflammatory factors, such as IL-6 and TGF-β, and induced EMT in lung adenocarcinoma and PCa (23,24). In this study, we aimed to assess the expression of TNF-α, NF-κB-P65, and E-cadherin in human prostate cancer tissues and the effect of metformin on TNF-α-induced EMT in prostate cancer PC3 cells.

Forty-six PCa and 25 benign prostatic hyperplasia (BPH) patients frozen tissue samples were obtained from the Department of Pathology, Renmin Hospital of Wuhan University, China. The study was conducted in accordance with the Declaration of Helsinki (as revised in 2013). The study was approved by the Ethics Committee of the Renmin Hospital of Wuhan University (Wuhan, China) (NO.: RM2018Y018-06) and informed consent was taken from all the patients. There were no differences in age between the two groups. Among the 46 cases of PCa, 15 cases were classified as having a low Gleason score (4-7), and the other 31 cases were classified as having a high Gleason score (8-10).

A scratch was made carefully with a sterile 200-µl pipette tip when adherent PC3cells reached 80% confluence. Then, the cells were incubated for another 24 h. Finally, photomicrographs were examined with a phase contrast microscope (Nikon Eclipse TE2000-U).

The migration ability of PC3 cells was evaluated using the modified Boyden chamber method. PC3 cells were plated onto Matrigel-coated 8 µm filters with 20 ng/mL TNF-α in the presence or absence of 1 mM metformin. Outer wells were set as a chemoattractant filling with 800 µL of RPMI-1640 containing 10% FBS. Forty-eight hours after plating, the invading cells were the cells on the undersurface of the filter which were fixed, stained and counted.

After serum starved for 12 h, PC3 cells which were cultured on chamber slides were treated with 20 ng/mL TNF-α with or without 1 mM metformin for 72 h. After being washed three times with PBS, the cells were fixed with 4% paraformaldehyde for 20 min and then permeabilized with 0.3% Triton X-100 for 10 min. Then, the cells were blocked with goat serum for 2 h at room temperature and incubated with specific antibodies for NF-κB-P65 (1:100 dilution, Cell Signaling Technology, USA) and E-cadherin (1:50 dilution, Cell Signaling Technology Cat# 14472, RRID: AB_2728770) at 4 °C overnight. After being washed three times with PBS, slides were incubated with FITC-conjugated secondary antibodies (1:100 dilution) for 2 h at room temperature. Nuclei were stained with DAPI for 5 min. Photomicrographs were captured with a microscope (OLYMPUS) to analyze the expression of NF-κB-P65 and E-cadherin (400×).

All data are expressed as mean ± SEM. P values <0.05 were considered to indicate statistically significant differences. The means of the different groups were performed using Student’s t test.

Expression of TNF-α and NF-κB-P65 was upregulated, while E-cadherin expression was downregulated in PCa specimens with a high Gleason score 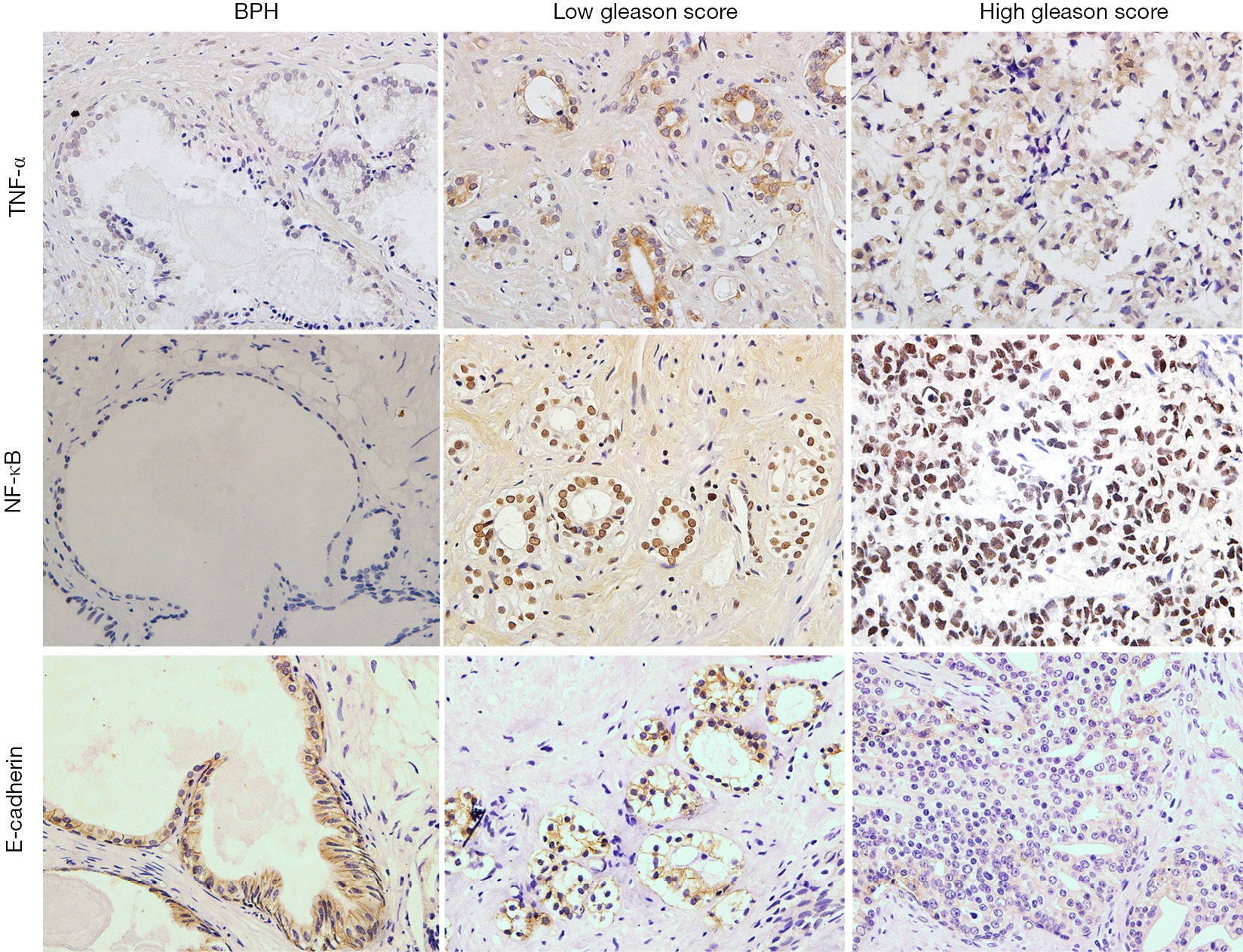 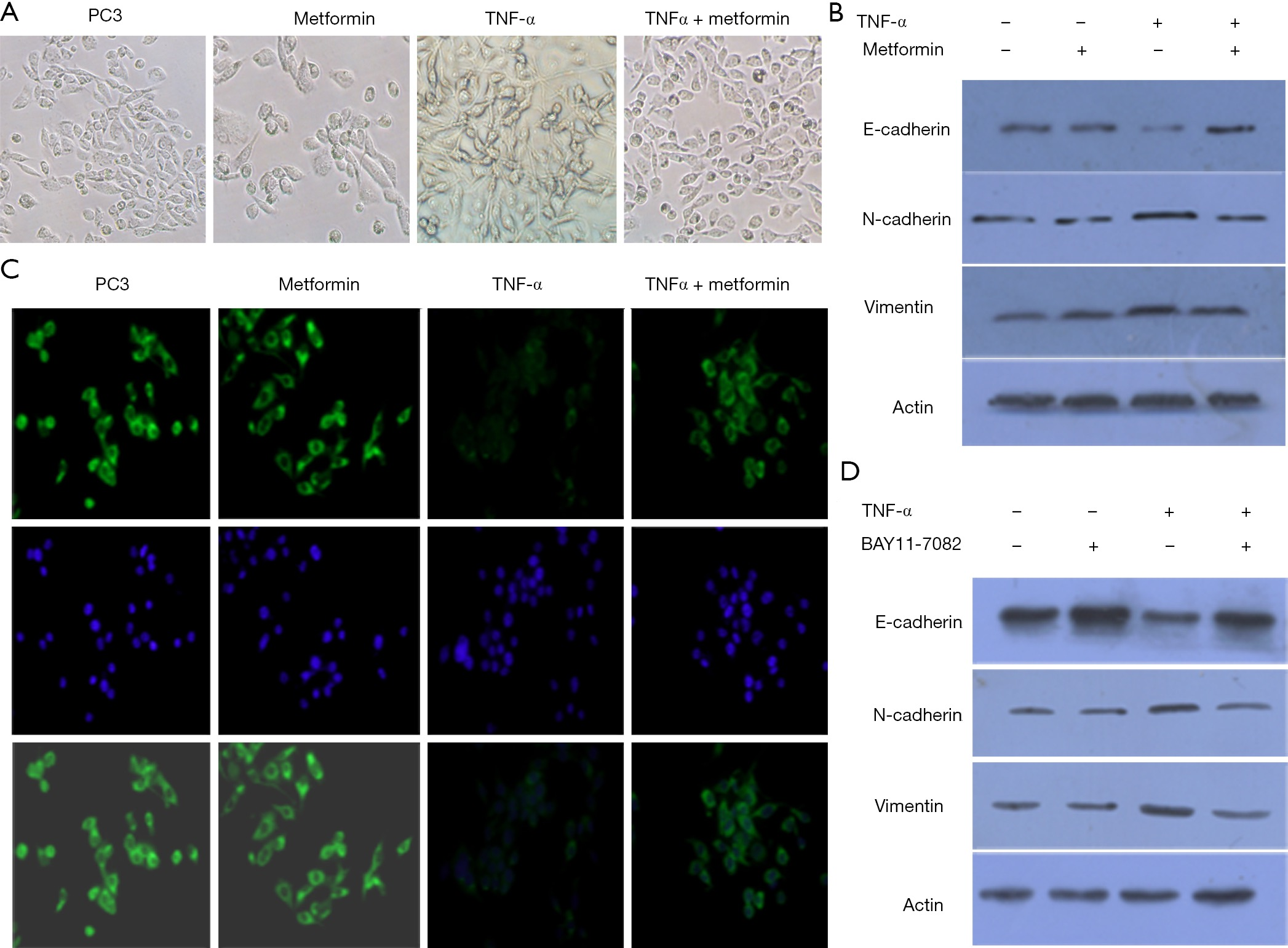 Then, the effects of BAY11-7082, an inhibitor of NF-κB, on the TNF-α-induced EMT process of PC3 prostate cancer cells were examined (Figure 2D). Consistent with the metformin results, BAY11-7082 also significantly restored the expression of the epithelial marker E-cadherin (P<0.05) and downregulated the expression of the mesenchymal markers N-cadherin and Vimentin (P<0.05). 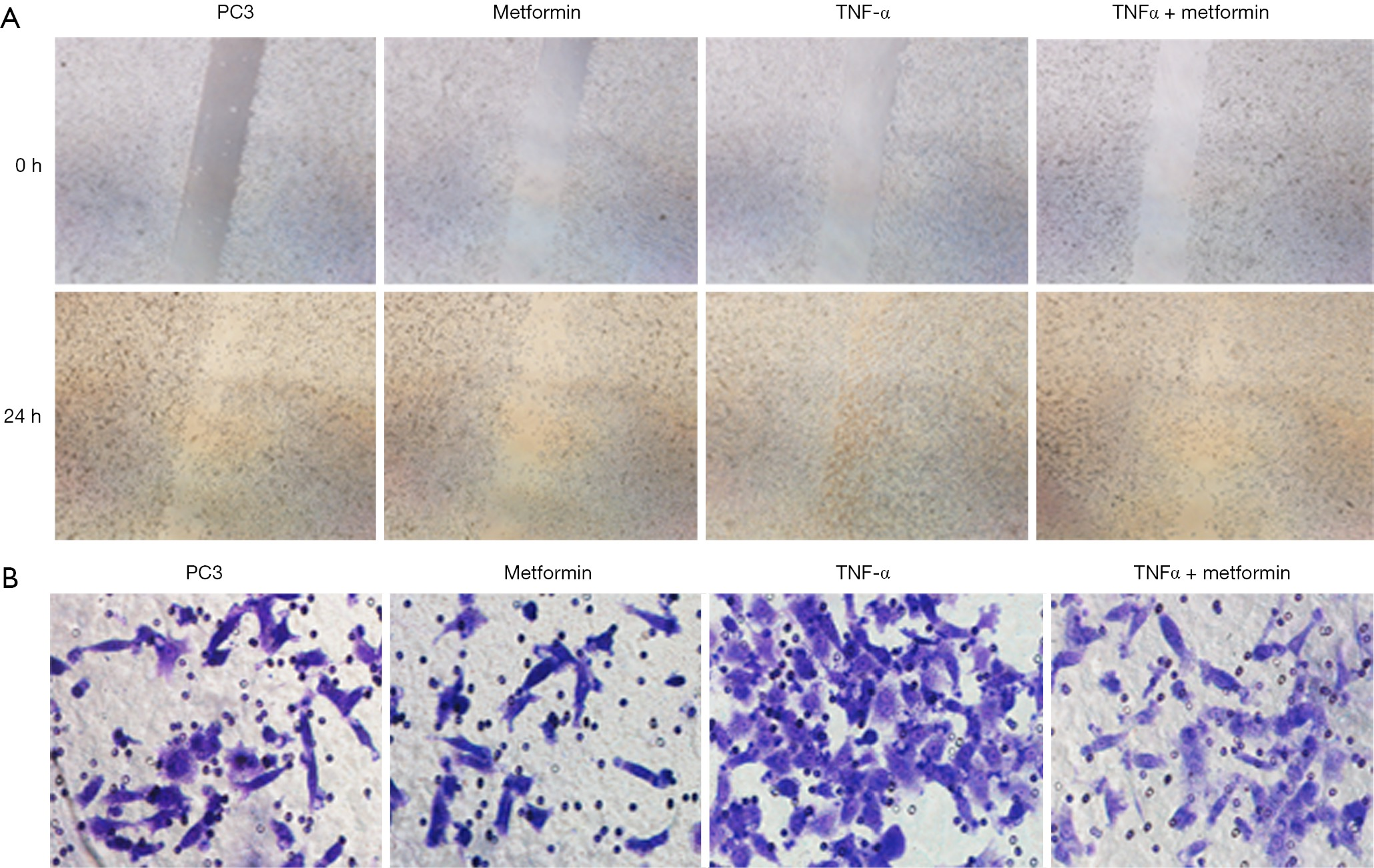 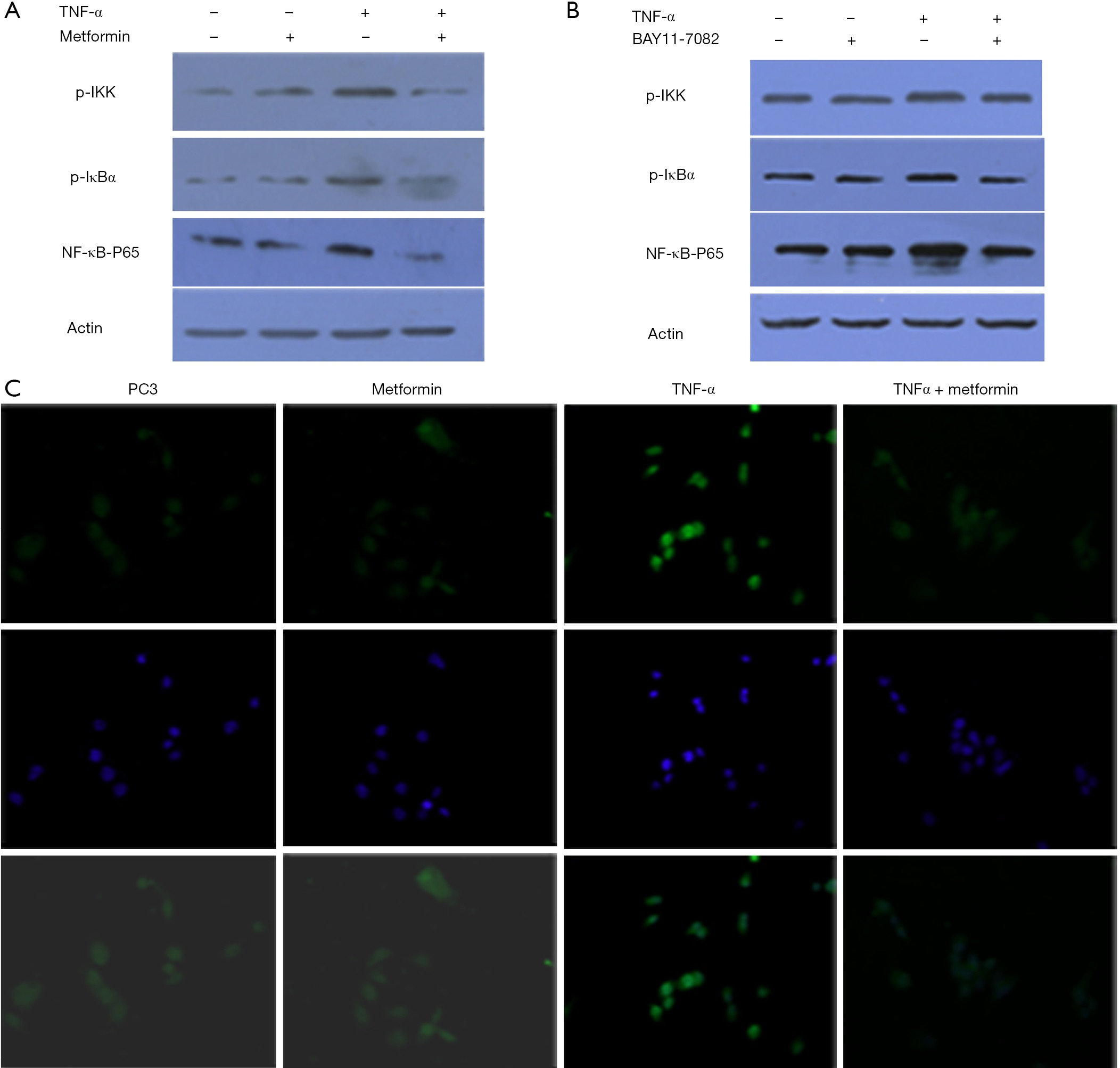 Moreover, the effects of BAY11-7082 on PC3 prostate cancer cells were examined (Figure 4C). Consistent with the metformin results, BAY11-7082 significantly down- regulated the expression of p-IKK, p-IκBα, and NF-κB-P65 (P<0.05).

The present study demonstrated that the expression of TNF-α and NF-κB-P65 was significantly upregulated in PCa tissues and positively correlated with the Gleason score, while E-cadherin expression was significantly downregulated in PCa tissues and negatively correlated with the Gleason score. Moreover, metformin effectively inhibited the TNF-α-induced migration ability and invasion activity of PC3 cells. Furthermore, metformin might suppress the TNF-α-induced EMT process by inactivating the NF-κB signaling pathway.

Mortality in PCa patients is mainly caused by tumor metastasis. Recently, it was demonstrated that chronic inflammation plays a key role in PCa metastasis, which is a major challenge during PCa therapy. It is well known that inflammatory mediators, such as TNF-α, TGF-β and IL-6, are involved in the migration, invasion and metastasis of malignant cells (26). TNF-α is a major proinflammatory cytokine that participates in a series of biological activities, including inflammation, cell proliferation, cell differentiation and apoptosis (27). TNF-α is able to activate the canonical NF-κB pathway in various cell types. When cells are stimulated by TNF-α, IKK-β is first activated, and then the NF-κB inhibitor IκBα is phosphorylated and rapidly degraded. This allows the NF-κB heterodimer to translocate into the nucleus and activate the expression of numerous downstream target genes implicated in angiogenesis, the immune response, cell proliferation and cell apoptosis (28,29).

The EMT process can be induced by various growth factors and cytokines, which are produced by cell activation (30-32). We administered TNF-α to prostate cancer PC3 cells to investigate the effect of TNF-α on EMT characteristics in prostate cancer cells. Our results demonstrated that TNF-α-treated PC3 cells showed a significant increase in cell migration ability and invasion activity, suggesting a possible role of TNF-α in the migration behavior of prostate cancer cells. A hallmark of EMT is the loss of the cell adhesion molecule E-cadherin. Our results showed that TNF-α decreased the expression of E-cadherin and increased the expression of N-cadherin and Vimentin, but these changes were reversed by BAY11-7082, an inhibitor of NF-κB. These results demonstrated that TNF-α might promote the EMT process in prostate cancer cells via the NF-κB signaling pathway.

A series of in vitro and in vivo studies suggested that metformin might reduce the risk of biochemical recurrence and the rates of mortality in PCa (4,24). Although there have been kinds of researches on exploring the potential mechanism of metformin acting in PCa, the mechanism is not clear at all. This study showed that metformin alone had no effect on the NF-κB signaling pathway or EMT process. However, metformin combined with TNF-α successfully reduced the migration ability and invasion activity of prostate cancer cells induced by TNF-α. Moreover, metformin suppressed EMT, as demonstrated by the restored expression of E-cadherin and decreased the expression of N-cadherin and Vimentin.

TNF-α induces a series of inflammatory responses that further activate the NF-kB signaling pathway. Interestingly, this proinflammatory feedback loop also participates in prostate cancer. TNF-α significantly upregulated the expression of p-IKK, p-IκBα, and NF-κB-P65. However, metformin significantly lowered the TNF-α-induced expression of p-IKK, p-IκBα, and NF-κB-P65. Furthermore, metformin also inhibited NF-κB-P65 translocation into the nucleus. This study found that TNF-α promoted the EMT process, which was inhibited by BAY11-7082, an inhibitor of NF-κB. Consistent with our immunohistochemistry results in human prostate cancer tissues, TNF-α and NF-κB-P65 were positively correlated with the Gleason score, while E-cadherin expression was negatively correlated with the Gleason score. Therefore, we speculated that activation of the NF-κB signaling pathway might be involved in the EMT process in prostate cancer and prostate cancer progression and metastasis. Metformin might suppress the EMT process in prostate cancer and inactivate the TNF-α-induced NF-κB signaling pathway.

We were grateful to Staffs in Key laboratory of Hubei Province for Digestive System Disease for their kind assistance.

Conflicts of Interest: All authors have completed the ICMJE uniform disclosure form (available at http://dx.doi.org/10.21037/tcr-20-1186). The authors have no conflicts of interest to declare.

Ethical Statement: The authors are accountable for all aspects of the work in ensuring that questions related to the accuracy or integrity of any part of the work are appropriately investigated and resolved. The study was conducted in accordance with the Declaration of Helsinki (as revised in 2013). The study was approved by the Ethics Committee of the Renmin Hospital of Wuhan University (Wuhan, China) (No.: RM2018Y018-06) and informed consent was taken from all the patients.