Prolonged survival time with surgical therapy in different types of thymoma: an analysis based on Surveillance Epidemiology and End Results Database

Thymoma is an uncommon disease, which is characterized by remarkable morphological heterogeneity and unique biological behavior. A study by the United States National Cancer Institute (NCI) has shown that the incidence of thymoma in the United States is 0.15 cases per 100,000 persons (1,2). However, thymoma is the most common tumor disease in the area of anterior mediastinum. Therefore, it is important to study the effective treatment and prognostic factors of thymoma.

World Health Organization (WHO) in 2015 reclassified thymomas based on morphology and ratio of lymphocytes to epithelial cells. According to it, there were 6 categories of thymoma, A, AB, and B1 are the low-risk kinds, and B2 and B3 are the high-risk kinds. The sixth category is the thymic carcinoma (previously classified as type C, and we used C to represent it) (3-6).

Complete surgical resection (R0) is the standard therapeutic approach for almost all thymoma. However, for advanced and unresectable thymoma, a multimodality treatment regime is recommended (7-10). It can also be used as a supplement after surgery.

The Surveillance, Epidemiology, and End Results (SEER) Program provides information on cancer statistics of the United States in an effort to reduce the cancer burden among the U.S. and the whole world population. Based on it, we did retrospective research to find out the favorable prognostic factors of thymoma and look forward to providing advice on the treatment of the disease.

We present the following article in accordance with the STROBE reporting checklist (available at http://dx.doi.org/10.21037/tcr-20-951).

We collected the data from SEER Nov. 2017 submission, which including the cancer data from 1973–2015 of the United States.

Patients with incomplete information above were excluded. Eventually, a total of 1,587 patients was included in this study.

All statistical analyses were performed by using SPSS 17.0 (SPSS Inc., Chicago IL, USA). Data were tested for normality and homogeneity of variance.

A cox-regression was used to screen for significant prognostic factors among all patients and patients in different groups. A Kaplan-Meier method with log-rank test was used for survival analysis. P value smaller than 0.05 was considered statistically significant.

Of the 1,587 patients, 841 were men and 746 were women. There were 225 black patients and 1,101 white patients. The rest 261 patients were in other races. A total of 1,288 patients ever underwent surgery, and the average diameter of tumors in all patients was 66 mm. The information of sex, race, age, surgical treatment state and tumor size of patients with different kinds of thymoma is shown in Table 1.

Table 1 The characteristics of the patients
Full table 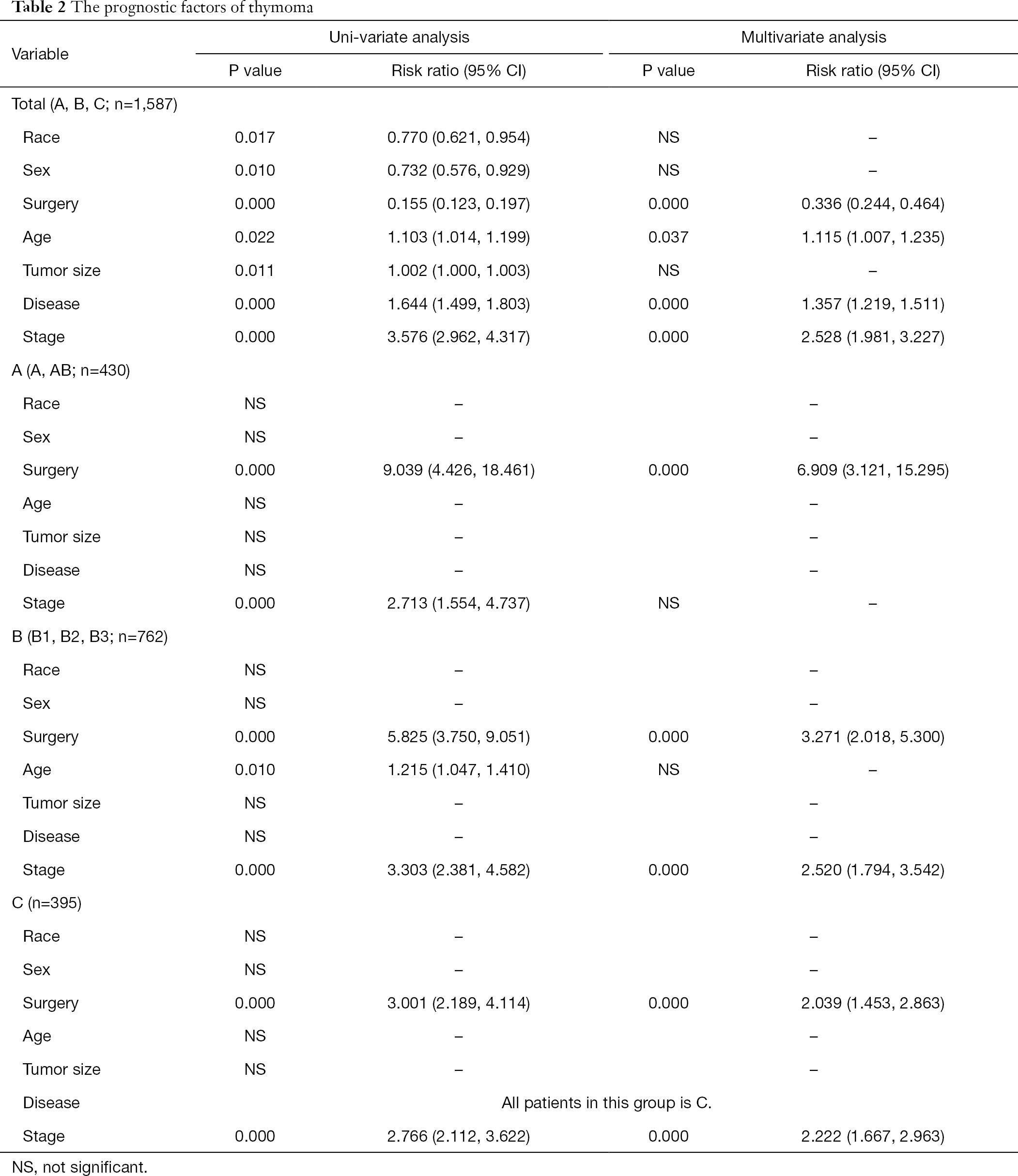 The survival time of patients with different kinds of thymoma 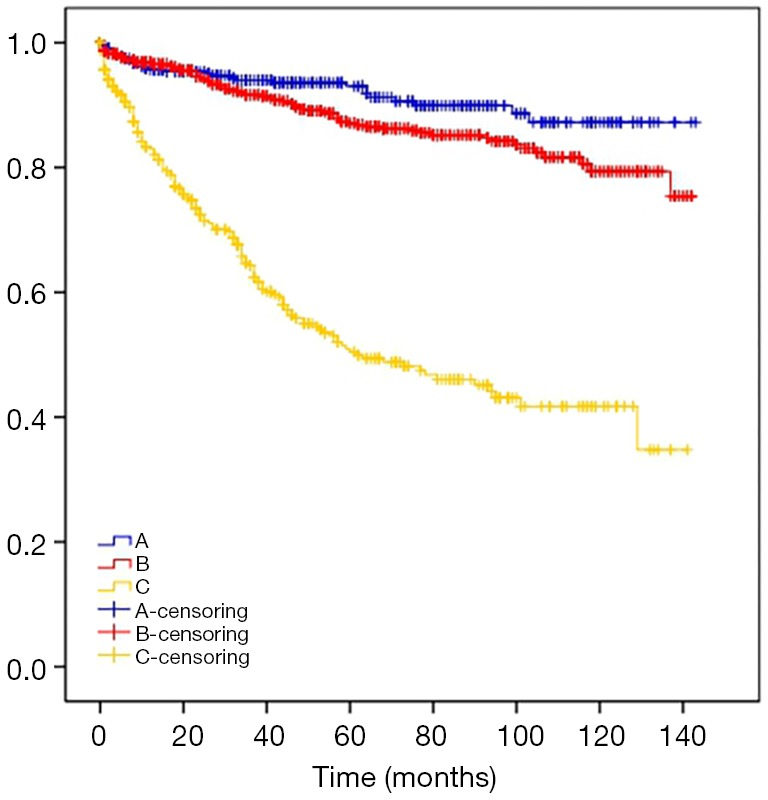 Figure 1 The survival time of patients with type A, B and C thymoma.

All patients were categorized as Masaoka-Koga stage groupings of I and IIA (localized, L), IIB (‘regional’, R), III and IV (‘distant’, D). The staging of patients with different types of thymoma was shown in Table 4.

According to the stage groupings and types of the disease, we divided all patients into 9 groups and found out that patients who had ever accepted surgery had a longer survival period in all groups (Table 5 and Figure 2). 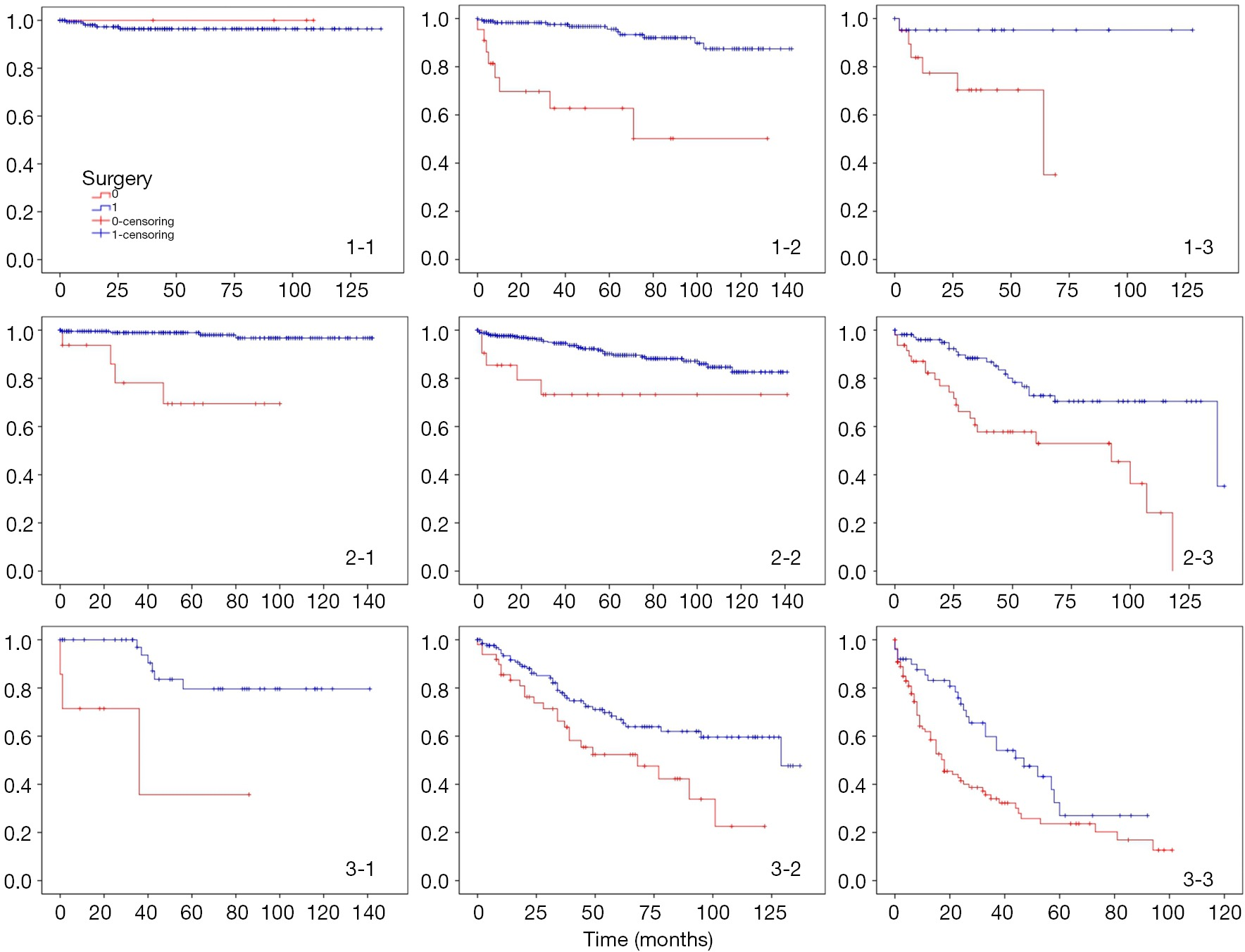 Thymomas are thymic epithelial tumors (TETs). The majority of them have non-malignant-appearing thymic epithelial cells mixed with variable proportions of lymphocytes. TETs have been a subject of much controversy over years because of the difficulties in predicting prognosis. Due to the complexity in classification of these tumours, many histological methods have been described in the literature for thymic neoplasms (13-17). In the newest WHO system, there are six different types of thymic tumours, A, AB, B1, B2, B3 and thymic carcinoma (we used C to stand for it in our research), based on the rate of non-malignant-appearing thymic epithelial cells and proportions of lymphocytes (3,18-20).

The most widely accepted staging system of thymic tumors was proposed by Masaoka and it was afterwards modified by Koga in 1994. In Masaoka-Koga staging system, stage I means grossly and microscopically completely encapsulated tumor; tumors with invasion into surrounding tissues but not breaking through mediastinal pleura or pericardium belong to stage II; stage III includes tumors with macroscopic invasion into neighboring organ; stage IV means tumors with metastasis (13).

Surgery is the mainstay of treatment for thymomas, especially the R0 resection. Radiotherapy plays a role in selected cases (stage III patients or R1–2 residual) and platinum-based chemotherapy remains the standard of care for patients with advanced disease. A multimodality approach would be advisable when surgery is not recommended (21).

We conducted our research based on SEER, which provides information on cancer statistics of the U.S.

In our research, we found the following facts. Firstly, patients with different types of thymic tumors had different average survival periods. Type A had the longest survival time while the carcinoma had the shortest. However, for the sub-type, like B1, B2 and B3, the survival times were not significantly different. The prognosis of thymoma cannot be well distinguished by the present classification of thymoma subtypes.

Secondly, surgical management was an independent beneficial prognostic factor for thymoma, whatever the disease’s stage or type. However, for the patients with type A thymoma at stage I, only 4 of them didn’t get surgical treatment while the other 177 patients got. The sample composition of this group was not appropriate, so the result was not reliable. The results of other groups showed that patients with thymoma could always get benefits from surgery, no matter what kind or stage of thymoma.

The study still had defects. The reasons for patients not receiving surgical treatment were not recorded, and the impact of this confounding factor on outcomes could not be ignored. However, the design of a prospective study for the selection of patients in surgical and non-surgical subgroups will also be constrained by medical ethics. In addition, the population of this study was small, and it was even smaller after grouping according to different types and stages. A study with a larger population could be more persuasive.

Nevertheless, our work stated that surgery remained the best treatment for all thymic tumors, regardless of stage and classification.

Surgical management was an independent beneficial prognostic factor for thymoma, whatever the disease’s stage or type. All patients with thymic tumors should seek surgical treatment as soon as possible.

We are grateful to the Department of Thoracic Surgery, Union Hospital, Tongji Medical College, Huazhong University of Science and Technology, Wuhan, China.

Reporting Checklist: The authors have completed the STROBE reporting checklist. Available at http://dx.doi.org/10.21037/tcr-20-951

Conflicts of Interest: All authors have completed the ICMJE uniform disclosure form (available at http://dx.doi.org/10.21037/tcr-20-951). The authors have no conflicts of interest to declare.