In recent years, there are many studies focusing on cancer biomarkers, and emerging biomarkers have been shown to play a role in cancer. As a novel gene family, the human chemokine-like factor (CKLF)-like MARVEL transmembrane domain-containing family (CMTM) is implicated in reproduction, immunity, and carcinogenesis. High expression of CMTM2 and CMTM3 was found in the male testes and important in spermatogenesis (8,9). Furthermore, CMTM4 cooperates with its family member CMTM6, can participate in immune escape through synergistic protection of PD-L1 (10). CMTM1 was found to be associated with chemotherapy resistance and prognosis in patients with NSCLC (11). Our previous studies have identified that CMTM2, CMTM4, CMTM6, and CMTM7 were down-regulated in hepatocellular carcinoma (HCC) tissues (12-15). These findings suggest that CMTM family members are potential important cancer biomarkers for cancer diagnosis and therapy.

CMTM4 is the most conserved chemokine containing the MARVEL domain on chromosome 16q22.1 (16). CMTM4 exhibits tumor suppressive roles in renal clear cell carcinoma (CCRCC) and can be an effective target for CCRCC therapy (17), as well as a risk factor of poor prognosis for HCC (13). It was found that CMTM4 could cause cell cycle arrest at G2/M phase and inhibit HeLa cell proliferation without inducing apoptosis (18). Moreover, there was an interaction between CMTM4 and PD-L1 in cancer tissues. CMTM4 could protect PD-L1 as a target for lysosomal degradation and prevent the clearance of tumor cells from body immune cells, showing an important role of CMTM4 in cancer immunotherapy (10). However, the expression and clinical significance of CMTM4 in lung cancer have not been elucidated.

To explore the expression and clinical significance of CMTM4 in lung cancer, we conducted immunohistochemistry (IHC) analysis in 75 paired lung adenocarcinoma and non-tumor lung tissues. We found that CMTM4 was down-regulated in lung cancer tissues and had a relationship with metastasis and prognosis in lung cancer patients.

We present the following article in accordance with the REMARK reporting checklist (available at: http://dx.doi.org/10.21037/tcr-20-1254).

Seventy-five paired lung adenocarcinoma and non-tumor lung tissues were collected from the Affiliated Guilin People’s Hospital of Guilin Medical University from 2014 to 2016. These cases were diagnosed as lung cancer by pathological method and had no treatment before operation. All patients had detailed clinical data and signed the informed consent. The study was conducted in accordance with the Declaration of Helsinki (as revised in 2013). This study was approved by the ethics committee of Guilin Medical University (GLMC2014003).

The clinic-pathological features of lung cancer patients were shown in Table 1. Some variables in Table 1 were defined as follows. Patients had a history of smoking, alcohol intake, allergy, and diseases diagnosed were defined as “Yes” of smoking, alcohol intake, allergy history, and past history. According to the latest WHO classification (19), these cases were all invasive adenocarcinomas and classified into 5 subtypes, acinar predominant, solid predominant, papillary predominant, mucinous adenocarcinoma, and fetal adenocarcinoma. The TNM classification was conducted according to 8th Edition of the TNM Classification for Lung Cancer (20).

The tissues were made on a tissue microarray from Fanpu (Guilin, China). And then the IHC assay was performed to detect the expression of CMTM4 by an IHC kit (Maixin biotechnologies, Fuzhou, China) according to the previous method (14). After incubated with primary CMTM4 antibody (NBP1-84457, Novus, CO, USA) and secondary anti-rabbit antibody, the tissue microarray was color-developed by 3,3’-aminobenzidine tetrahydrochloride (DAB), and observed under a microscope for 5–10 min until the appropriate color appeared. And then it was counterstained with hematoxylin, dehydrated, transparent, and ﬁxed.

The IHC results were read by two professional pathologists according to the intensity of staining and the percentage of positive cells. For the inconsistency of the results, a third pathologist was invited to reread the tissue microarray. Five visual fields (×400) were observed in each section. The score for percentage of positive cells was defined as: 0 for ≤10%, 1 for 11–25%, 2 for 26–50%, 3 for 51–75%, and 4 for >75%. The score for intensity of staining was defined as: 0 for no color, 1 for light color, 2 for middle, and 3 for dark brown color. H-score (percentage × intensity) is for CMTM4 expression. H-score >4 was defined as positive expression of CMTM4 and ≤4 was defined as negative expression of CMTM4.

All data were statistically analyzed by SPSS 19.0 software. Chi-square test was used to analyze the expression difference of CMTM4 between lung adenocarcinoma and non-tumor lung tissues. Kaplan-Meier method and Log-Rank test were used to compare the survival curves between different groups. P<0.05 was defined as statistically significant.

CMTM4 expression is correlated with the prognosis of lung cancer patients 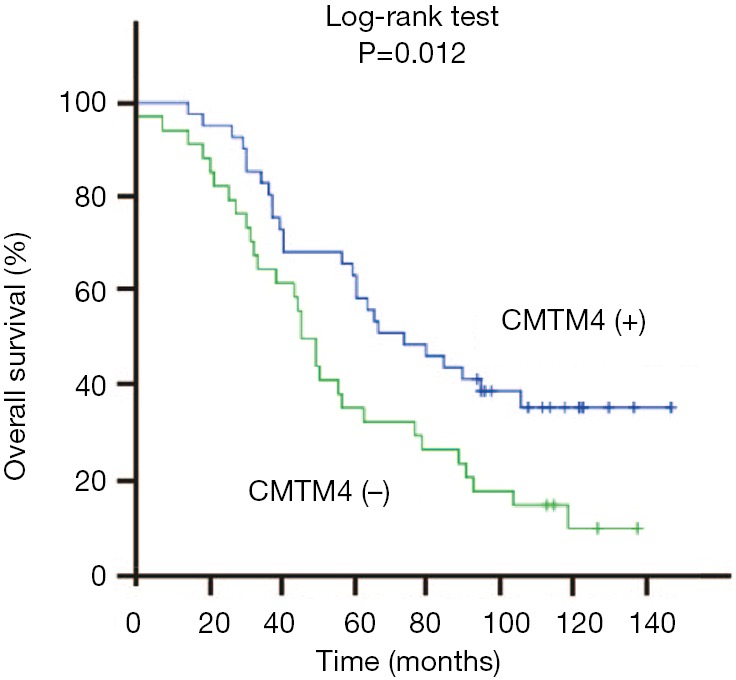 Figure 2 The relationship between CMTM4 expression and the prognosis of lung cancer patients from IHC result.

As a leading cause of death in both men and women worldwide, lung cancer has become a global problem and attracted a lot of attention. In this study, we found that the expression of CMTM4 was lower in lung adenocarcinoma tissues than that in the corresponding non-tumor tissues. Moreover, down-regulated CMTM4 was associated with gender, smoking, and metastasis in lung cancer patients. In addition, CMTM4 expression was an independent prognostic factor for the overall survival of lung cancer patients. Our study suggests a suppressor role of CMTM4 in lung cancer.

CMTM family members are widely expressed and play an important role in various cellular processes, especially in carcinogenesis. Increased expression of CMTM1_v17 in breast cancer cells can promote cell proliferation and resistance to tumor necrosis factor-α (TNF-α)-induced apoptosis (22). Apart from affecting sperm and testosterone production, CMTM2 is also found down-regulated in HCC tissues and associated with the prognosis of HCC patients (12). CMTM3 is an independent prognostic marker for gastric cancer (23), while CMTM5 is an independent indicator of prognosis for oral squamous cell carcinoma (24), and CMTM7 is an independent prognostic factor in NSCLC patients (25). CMTM8 regulates cell proliferation and apoptosis by influencing EGFR and related signaling pathways through the MARVEL region (26).

In consistent with its family members, CMTM4 also shows anti-tumorigenic activity in several cancers, such as CCRCC, HCC, and colorectal cancer (13,17,27). Our study detected down-regulated CMTM4 expression in lung adenocarcinoma tissues, further supporting its suppressor role in lung cancer. The reason is mainly in the location of the CMTM4 gene on chromosome 16q22.1, a locus that harbors a number of tumor-suppressor genes (16). Furthermore, in accord with our previous study of CMTM4 in HCC (13), this study also found that the expression of CMTM4 was associated with some clinic-pathological features of lung cancer patients, gender, smoking, and metastasis. As all we know, smoking is the main risk factor for lung cancer. Anti-smoking strategies are the most effective and efficient way to reduce the high incidence and mortality of lung cancer (28). Through the relationship between CMTM4 expression and smoking status of lung cancer patients, we can conclude some etiology of lung cancer caused by smoking. The exact mechanism needs to be further explored in other models. Of particular concern, the identification of CMTM4 as a critical PD-L1 regulator provides that CMTM4 can be used as an immunotherapeutic target for cancer (10). Our study also showed that the negative expression of CMTM4 was correlated with shorter survival time of lung cancer patients than the positive expression of CMTM4, implying a potential prognosis marker of CMTM4 in lung cancer.

In addition, there are some limits in our study. First, we detected CMTM4 expression only in lung adenocarcinoma tissues and the sample size was small. Second, we had small proportion of patients in high stage and didn’t exclude the other possible therapy that patients had received after surgery. Third, we didn’t detect PD-L1 expression to see its correlation with CMTM4. In future, we need to increase the sample size and select more subtype of lung cancer to solve these shortcomings.

Funding: This work was supported by the National Natural Science Foundation of China (81860586, 81860602), Key Science and Technology Research and Development Program Project of Guangxi (AB17292074).

Reporting Checklist: The authors present the study in accordance with the REMARK reporting checklist. available at http://dx.doi.org/10.21037/tcr-20-1254

Conflicts of Interest: All authors have completed the ICMJE uniform disclosure form (available at http://dx.doi.org/10.21037/tcr-20-1254). The authors have no conflicts of interest to declare.

Ethical Statement: The authors are accountable for all aspects of the work in ensuring that questions related to the accuracy or integrity of any part of the work are appropriately investigated and resolved. All patients had detailed clinical data and signed the informed consent. The study was conducted in accordance with the Declaration of Helsinki (as revised in 2013). This study was approved by the medical ethics committee of Guilin Medical University (GLMC2014003).