Hepatectomy is the only potential curative therapy for liver cancer without distant metastasis (1); however, the high incidence of tumor recurrence and metastasis is the main reason for mortality after surgery (2). Therefore, monitoring after hepatectomy is crucial for the early detection of recurrence and the subsequent determination of whether these patients who experience recurrence are eligible for additional therapy, such as repeat hepatectomy and liver transplant (3). Patients who undergo second and third hepatectomies after tumor recurrence have a 5-year survival rate of 60% and 43%, respectively (4,5). Computed tomography (CT) and magnetic resonance imaging (MRI) are commonly used methods for detecting disease recurrence after hepatectomy, but they have the disadvantage of being expensive, and are therefore unavailable in many hospitals. They also lack sensitivity and specificity for the early detection of recurrence.

α-Fetoprotein (AFP) is an embryo protein produced by the yolk sac and fetal liver during fetal development. It is the most widely used tumor biomarker currently available for the detection of liver cancer (6,7), and is therefore often used to diagnose and monitor liver cancer in patients (8,9). It has been shown that 60–70% of patients with liver cancer, especially hepatocellular carcinoma (HCC), have elevated AFP levels, which are lower in patients with intrahepatic cholangiocarcinoma (ICC) and mixed-type HCC (10,11). AFP for liver cancer diagnosis currently has unsatisfactory sensitivity in clinical practice (12), and previously published studies have demonstrated that higher AFP levels result in worse overall survival (OS) in HCC patients after hepatectomy (12,13), whereas its effects on the prognosis of other histological types of liver cancer (ICC or mixed-type HCC) are not clear. Moreover, it has been shown that normal AFP levels have low sensitivity and specificity for monitoring recurrence (13), especially in preoperative AFP-negative liver cancer (14). A previously published study showed that there was an upward trend in AFP levels during liver cancer recurrence (15). The results suggest that a slight rise in serum AFP may be sensitive for detecting the recurrence of liver cancer. In another study, elevated carcinoembryonic antigen (CEA) was found to be highly sensitive and specific for predicting the recurrence of colorectal cancer after surgery (16). The results showed that changes in traditional tumor biomarkers, such as CEA or AFP, are potentially useful for monitoring tumor recurrence with high sensitivity and specificity. However, the effects of serum delta AFP (ΔAFP) on the detection of treatment outcomes and on the prediction of prognosis in HCC patients after hepatectomy are unknown.

In the present study, we evaluated the effects of ΔAFP on detecting recurrence and predicting prognosis in patients with liver cancer treated with hepatectomy and without distant metastasis. We present the following article in accordance with the STROBE reporting checklist (available at http://dx.doi.org/10.21037/tcr-20-1874). 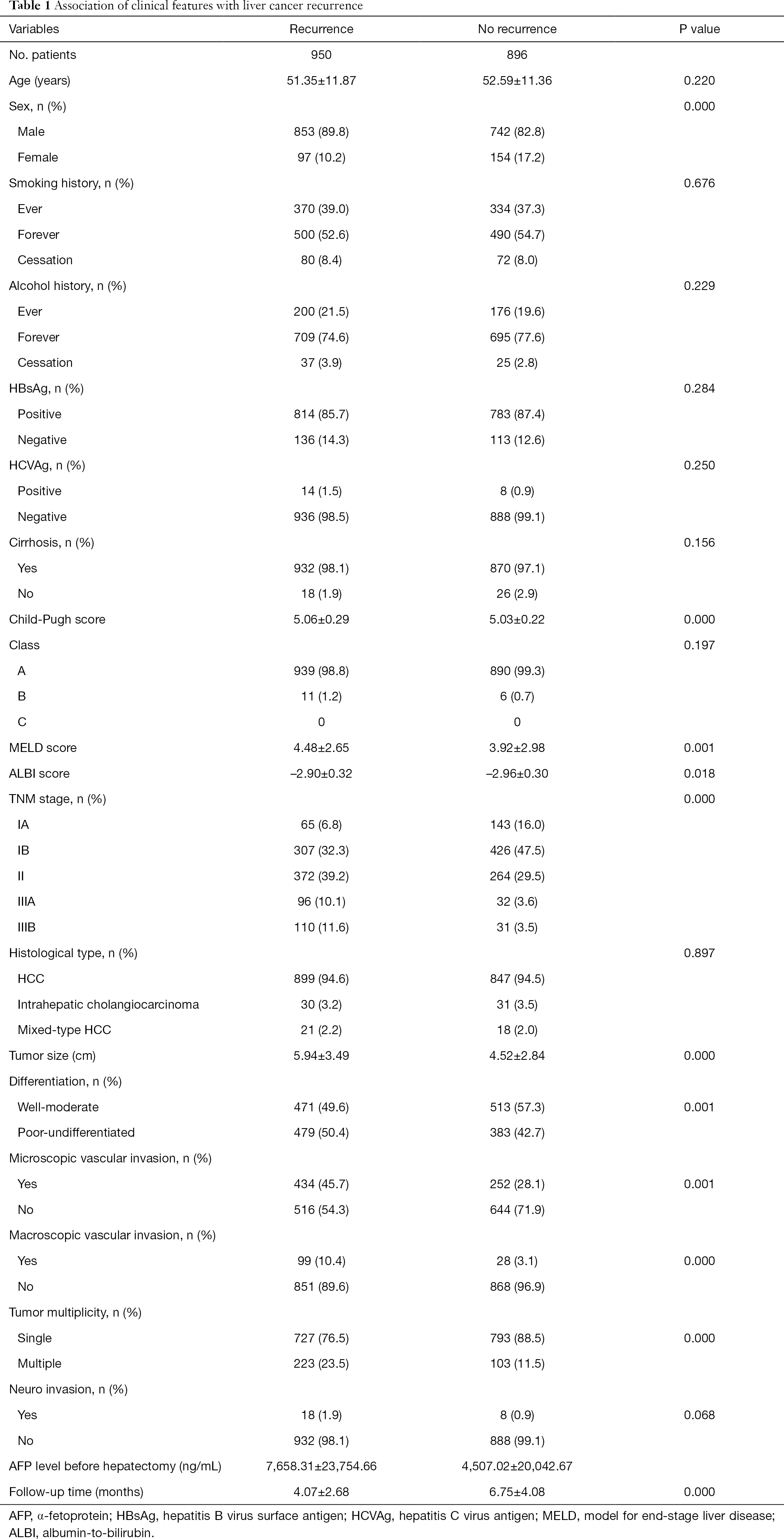 The AFP level was tested with the collected serum samples that were stored at room temperature and centrifuged at 3,500 ×g/min for 8 minutes. A Roche E-170 automatic electrochemistry analyzer was used to measure the lipid level.

After curative hepatectomy, patients underwent follow-up and examinations, including AFP serum test, CT scan, and MRI, in the first month after surgery and then every 3 months during the first 2 years after hepatectomy and every 6 months thereafter. Recurrence was determined by CT, MRI, and medical records. The research end-points were disease-free survival (DFS) and OS.

Statistical analyses were performed using SPSS version 20.0. Pearson’s χ2-test or Fisher’s exact test was chosen for evaluating the correlation between liver cancer recurrence and the clinical characteristics and pathological results. Survival curves were constructed using the Kaplan-Meier method and log-rank test. ΔAFP was equal to AFP at current re-examination minus AFP at the last re-examination after hepatectomy. Receiver operating characteristic (ROC) curve analysis was used to determine the cutoff value of the ΔAFP level. Comparisons of sensitivity and specificity of AFP and ΔAFP were analyzed using Pearson’s χ2-test. P<0.05 was considered statistically significant.

ΔAFP in the detection of liver cancer recurrence 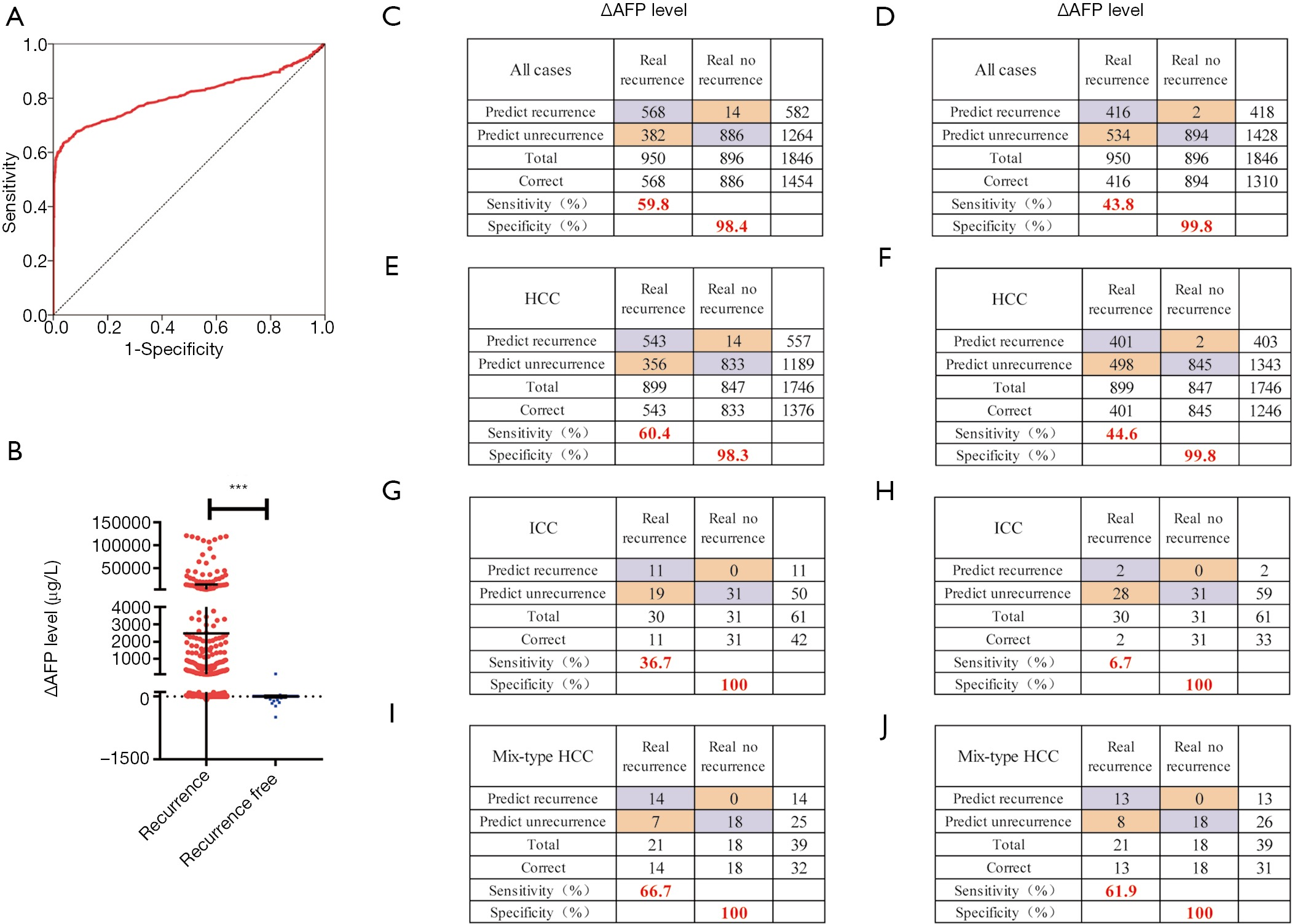 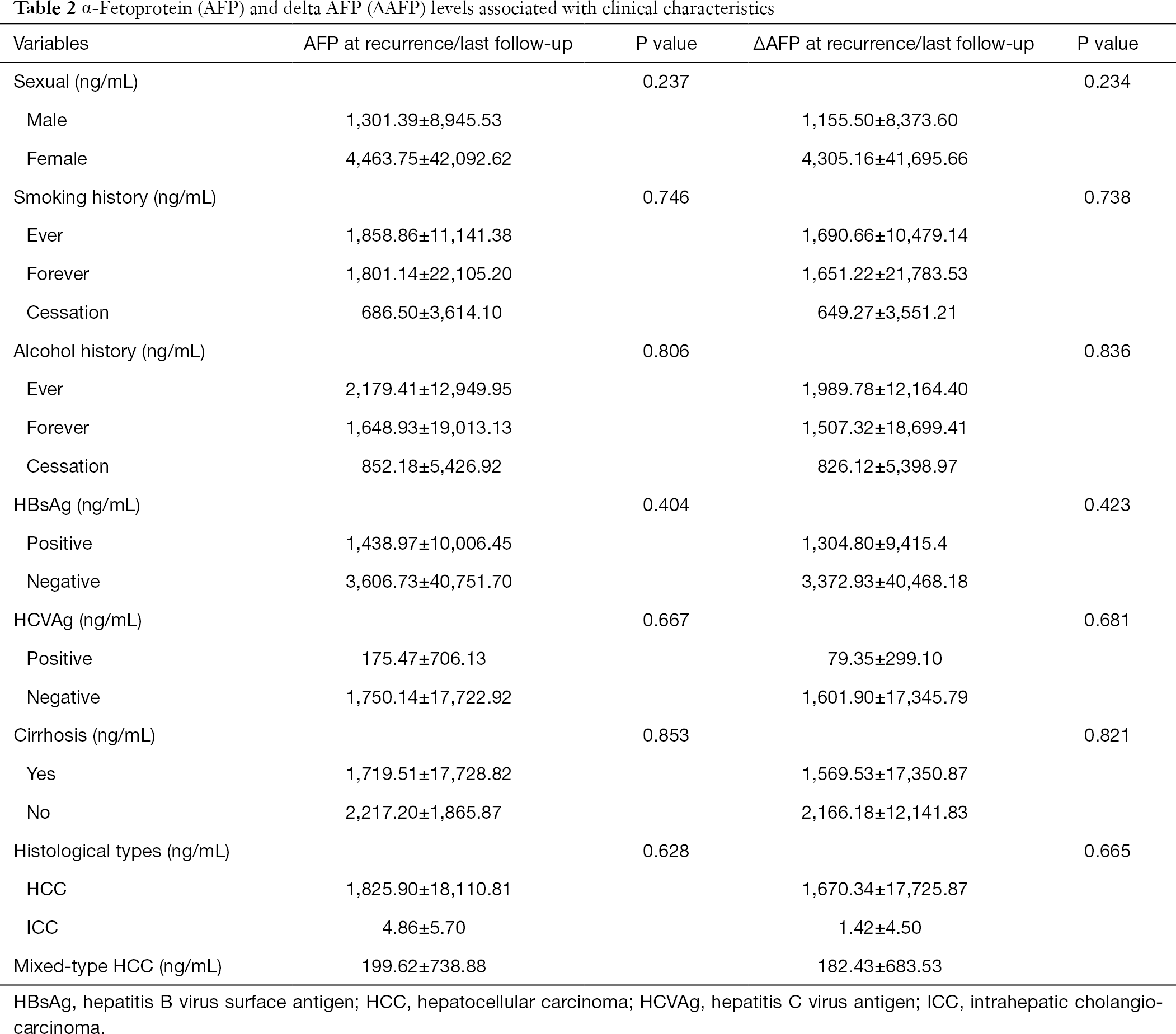 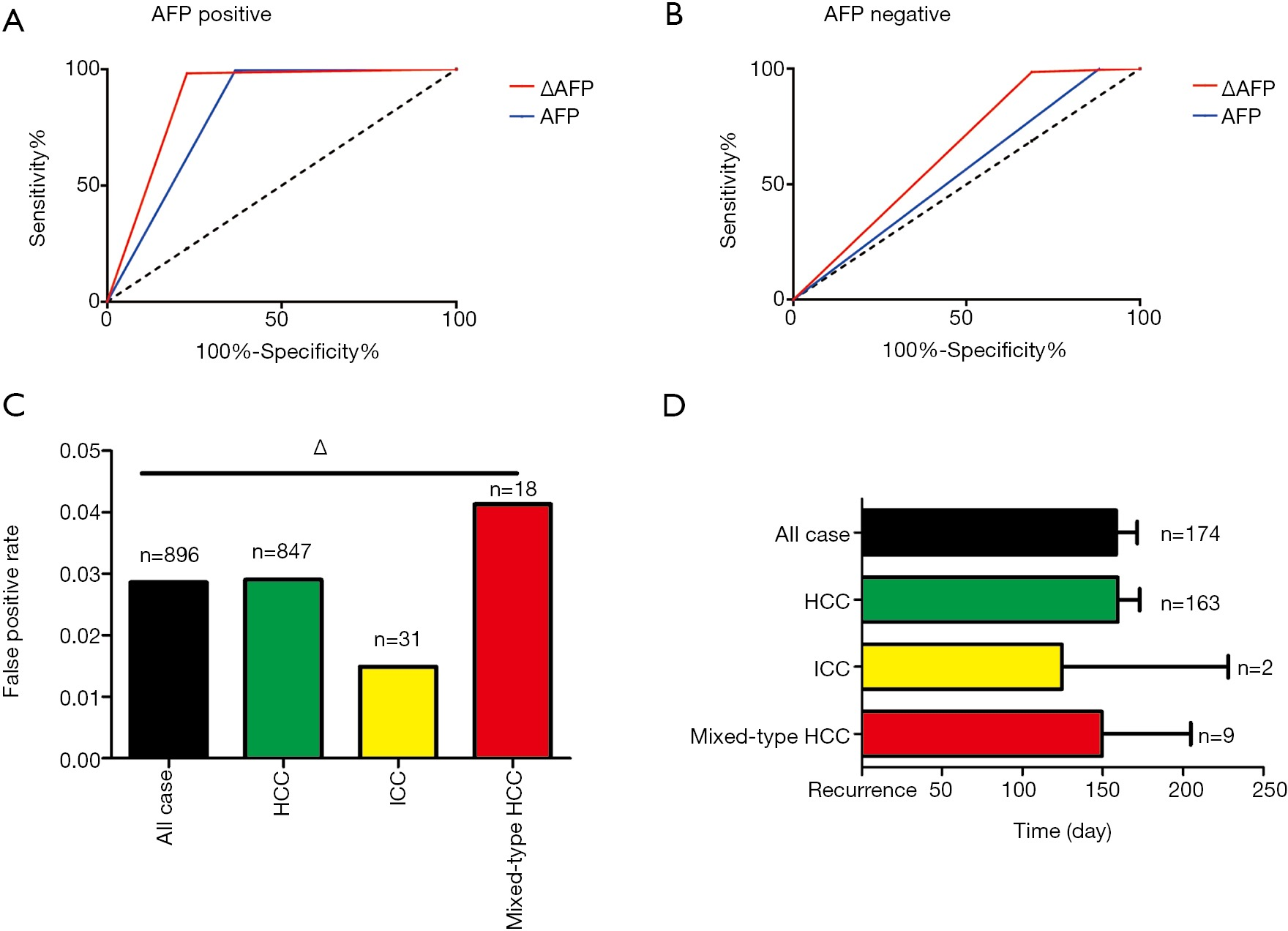 To validate the false-positive rate of the ΔAFP cutoff value during follow-up, we measured ΔAFP levels in recurrence-free patients (896/1,846), who had an average of 6.75±4.08 re-examinations after hepatectomy. The false-positive rates were 2.86%, 2.90%, 1.49%, and 4.13% for liver cancer, HCC, ICC, and mixed-type HCC, respectively (Figure 2C). However, 174 of 950 patients with recurrence exhibited ΔAFP exceeding the cutoff value before the clinical diagnosis of tumor recurrence, as determined by CT or MRI. In these patients, the time predicted by ΔAFP was 158.33 days for liver cancer, 159.25 days for HCC, 124.50 days for ICC, and 149.33 days for mixed-type HCC compared with CT or MRI (Figure 2D). 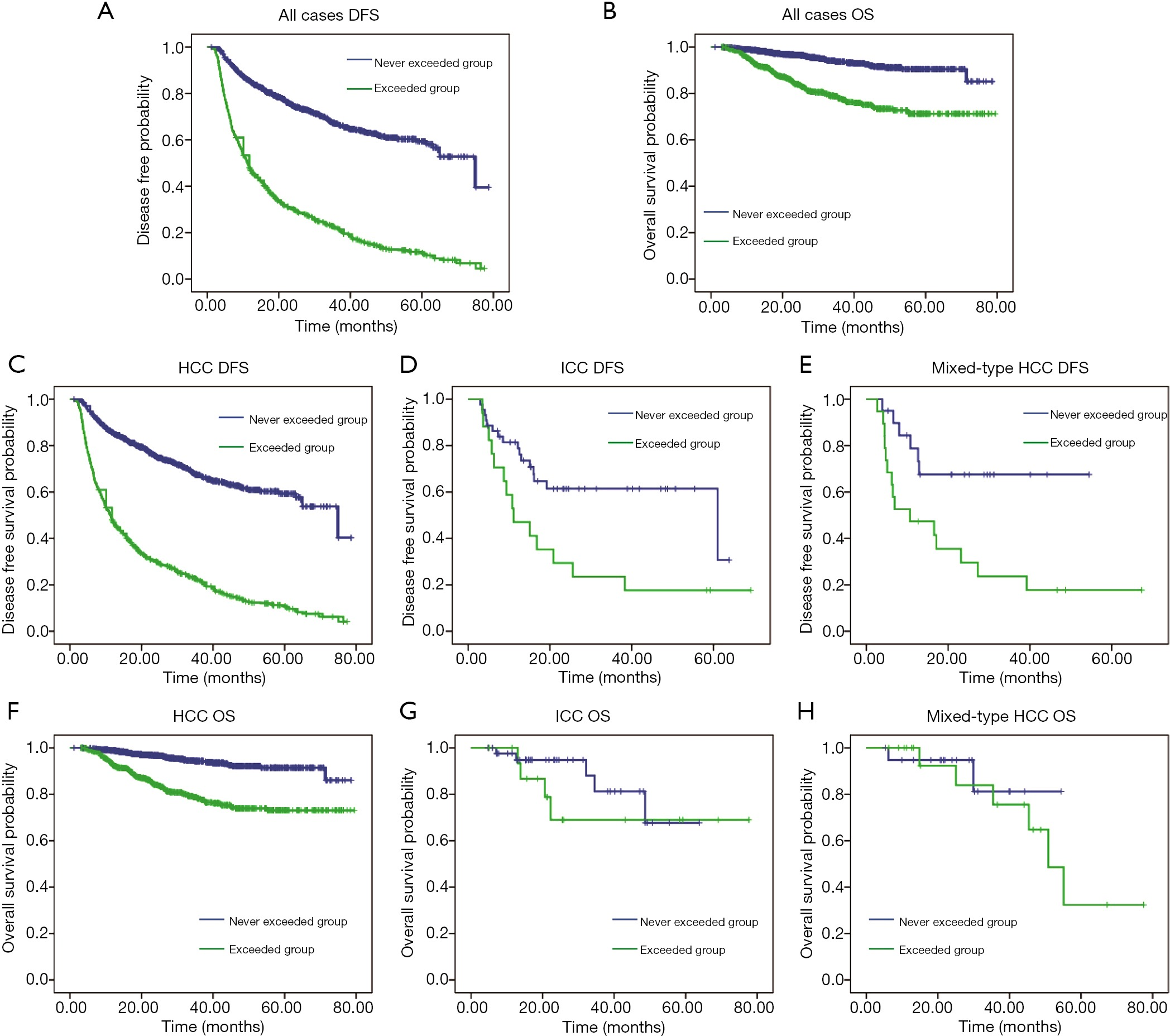 AFP level plays an important role in liver cancer diagnosis, prognosis, recurrence monitoring, and treatment response, but the effects of ΔAFP on liver cancer prognosis and surveillance are unclear. In the present study, we evaluated the ability of ΔAFP in recurrence detection and prognosis based on a cutoff value. We found that a ΔAFP cutoff value was more sensitive for detecting recurrence than AFP based on the normal range, and exhibited an upward trend before CT or MRI examination. However, liver cancer patients who exceeded this cutoff value more than once during follow-up had a worse prognosis after hepatectomy.

AFP level is commonly used as an indicator to monitor recurrence after hepatectomy in patients with liver cancer, especially HCC (14,20). The 2018 National Comprehensive Cancer Network Clinical Practice Guidelines in Oncology for Hepatobiliary Cancers, version 3, recommends that HCC patients after hepatectomy have serum AFP levels checked every 3 months for 2 years, and then every 6–12 months after 2 years; however, a definitive cutoff AFP value to predict recurrence and detect a change of recurrence risk level with a monitoring strategy remains unknown (21). Chang et al. reported that the best cutoff AFP value was 5.45 µg/L based on the last follow-up/recurrence AFP level of 72 HCC patients treated with hepatectomy and liver transplantation (15). This value was sensitive to AFP levels based on the normal range (84.8% vs. 62.5%), but its specificity was lower (77.1% vs. 94.3%). For liver transplantation, Nörthen et al. suggested best cut-off AFP values of 7, 6, and 6 μg/L at 1, 3, and 5 years after liver transplantation in 63 HCC patients with a diagnostic sensitivity of 79%, 81%, and 77%, and a specificity of 82%, 79%, and 69% (22). Previous studies have indicated that a cutoff value depends on AFP level after treatment with high sensitivity but low specificity, possibly due to the focus on AFP level without taking into account the variation of AFP values. Chang et al. found that some patients with recurrence exhibited an upward trend in AFP level before tumor recurrence, suggesting that the minor variable of AFP could be a sensitive biomarker in detecting liver cancer recurrence (15). However, the effect of ΔAFP level on liver cancer patients after hepatectomy is not yet clearly understood. In our study, 568 of 950 patients (59.8%) had an upward trend for the prediction of tumor recurrence. The cutoff ΔAFP level was more sensitive than the AFP level based on the normal range of 0–25 ng/mL (59.8% vs. 43.8%), but the specificity between these values was similar (98.4% vs. 99.5%). Our study also showed that this ΔAFP cutoff level may be useful for detecting ICC and mixed-type HCC after hepatectomy. The sensitivity was 36.7% in ICC patients and 66.7% in mixed-type HCC patients, while that yielded by the normal range was 6.7% and 61.9%, respectively. Specificity was 100% for all histological types and methods. About 40% of liver cancer patients were AFP-negative preoperatively, and had different biologic characteristics than those with AFP-positive liver cancer (23). Previous studies have found that AFP-positive liver cancer is associated with a worse prognosis compared with AFP-negative liver cancer (24). However, in current clinical practice, there is a lack of appropriate indicators for detecting recurrence of liver cancer after hepatectomy among liver cancer patients. Our findings suggest that ΔAFP is more sensitive than AFP in detecting recurrence among AFP-negative patients (31.2% vs. 11.7%). In addition, the ΔAFP cut-off level showed high specificity in 896 recurrence-free patients. The false-positive result might have been due to benign conditions after surgery, such as liver inflammation and cirrhosis (25). However, we found that 174 of 950 patients with recurrence had exceeded ΔAFP cutoff levels before recurrence was detected by MRI or CT scan, which likely means that tumor recurrence was below the level of detection on CT or MRI, but which might have led to increased AFP levels. These data suggest that the ΔAFP cutoff level may not only be used for detecting liver cancer postoperatively, but could also have potential for the early prediction of recurrence after hepatectomy (26).

In the survival analysis, we found that liver cancer patients who had exceeded ΔAFP cut-off levels during follow-up exhibited worse DFS and OS than patients who had never exceeded ΔAFP cutoff levels. This finding suggests that an exceeded ΔAFP cut-off level during follow-up is a prognostic indicator of liver cancer after hepatectomy. There was no difference in OS between the exceeded group and never-exceeded group in ICC and mixed-type HCC patients, but there was a significant difference in HCC patients. One reason for this difference may be due to the small sample size of patients with ICC and mixed-type HCC. Another reason may be that ICC and mixed-type HCC express lower levels of AFP than HCC (11,27,28). Several studies have reported that preoperative AFP level is a prognostic indicator in HCC patients (27-30). Although previous studies have reported that changes in AFP levels between pre- and post-hepatectomy can predict surgical outcomes (14,31,32), the effects of variations in AFP after hepatectomy remain unclear. The results of our study provide a new indicator for the real-time monitoring of recurrence and the evaluation of the prognosis of liver cancer after hepatectomy. If the ΔAFP exceeds the cutoff value during the postoperative monitoring of liver cancer patients, it is suggested that the frequency of re-examination is increased, or that additional examinations, such as chest CT or isotope bone scan, are undertaken for the early detection of metastatic and recurrent lesions to improve the prognosis of liver cancer.

The results of the present study showed that the ΔAFP cutoff level was sufficiently sensitive for monitoring recurrence after liver cancer hepatectomy, and patients with recurrence exhibited an upward trend with ΔAFP compared to MRI. However, the present study has some limitations. We excluded patients with metastasis and recurrence 1 month after surgery; therefore, subsequent studies are needed to validate and explore the ΔAFP cutoff level in all liver cancer patients, including those with inoperable cancer. In addition, as a retrospective study, we were not able to monitor AFP levels in a strict manner with regular frequency, which may have affected the observed fluctuations in AFP level. Finally, different institutions may have different values for the normal range. Therefore, further prospective studies are required to further explore and validate the detection ability of the ΔAFP cutoff level.

Reporting Checklist: The authors have completed the STROBE reporting checklist. Available at http://dx.doi.org/10.21037/tcr-20-1874

Conflicts of Interest: All authors have completed the ICMJE uniform disclosure form (available at http://dx.doi.org/10.21037/tcr-20-1874). The authors have no conflicts of interest to declare.

Ethical Statement: The authors are accountable for all aspects of the work in ensuring that questions related to the accuracy or integrity of any part of the work are appropriately investigated and resolved. The present study was approved by the Clinical Research Ethics Committee of Sun Yat-sen University Cancer Center (no. B2019-019-01). All procedures were strictly in accordance with the appropriate version of the Declaration of Helsinki (as revised in Brazil 2013). Individual consent for this retrospective analysis was waived.