Treatment outcomes for hepatoblastoma children with pulmonary metastasis and extrapulmonary involvement: experience of 36 cases at a single institution

Hepatoblastoma (HB) is the most common primary liver malignant tumor in children, and has a prevalence of 0.9 per million population (1,2). HB usually affects children under 3 years of age, presenting as a large abdominal mass (3). The diagnosis of HB is initially performed based on the elevated alpha-fetoprotein (AFP) level and radiographic detection of a liver mass, and confirmed by pathological examination of samples obtained via either primary liver resection or biopsy (4). Several factors are reported to have a significant impact on prognosis, including PRETEXT stage, pathology type, AFP level at diagnosis and after chemotherapy, and distant metastasis (5-8).

In the 1970s, the main treatment for HB was single tumor resection, which leaded to a very low overall survival (OS) rate (20% to 30%) (9). Since the 1980s, the comprehensive treatment of surgical combined with chemotherapy has significantly improved prognosis, and the 5-year survival rate could reach 75% (10,11). However, patients with advanced HB usually have poor prognosis, especially those with an extensive unifocal or multifocal primary tumor or distant metastases (12). About one fifth of the patients have lung metastasis at diagnosis, and the recurrence of HB mostly occurred in the lung (13,14). In addition, reports on the prognosis of HB with extrapulmonary involvement are relatively rare (2,15,16). Therefore, we aimed to retrospectively analyze the clinical characteristics and outcome in HB children with pulmonary metastasis and extrapulmonary involvement in this study and provide some valuable information for further treatment. We present the following article in accordance with the STROBE reporting checklist (available at http://dx.doi.org/10.21037/tcr-20-1876).

The diagnosis was based on the clinical examination, operative biopsy or percutaneous needle biopsy. Histology was mainly classified as epithelial (including embryonal, macrotrabecular and fetal subtypes) or mixed type (17). HB staging (stage I-IV) was performed according to the PRETEXT staging guidelines established by the International Childhood Liver Tumor Strategy Group (SIOPEL) (18). Risk stratification (extremely low risk, low risk, intermediate risk, high risk) for HB was based on both a SIOPEL risk stratification system and a Children’s Oncology Group (COG) staging system (19,20).

Analysis of therapeutic effect and follow-up

The prognosis of all patients was indicated by OS, which was calculated from the day of first admission to our hospital to the time of the last follow-up or death. Censored cases were defined as patients who died from non-tumor causes. The evaluation criteria of chemotherapy efficacy were partial response (PR) and complete response (CR). PR was defined as a reduction of the product of the largest perpendicular diameters of all measurable lesions by more than 50%. CR was defined as disappearance of all known tumor lesions. Recurrence was defined as biopsy confirmation, with clear imaging evidence and serum AFP increased 3 times continuously within 4 weeks. The patients were followed up to December 2018, with a median follow-up of 32.5 months.

A total of 36 HB patients (26 males, 10 females; median age, 2.13 years; range, 0.33–7.83 years) with pulmonary metastasis and extrapulmonary involvement were enrolled in this retrospective study from January 2010 to December 2017. The demographic and clinical characteristics of included patients were shown in Table 1. 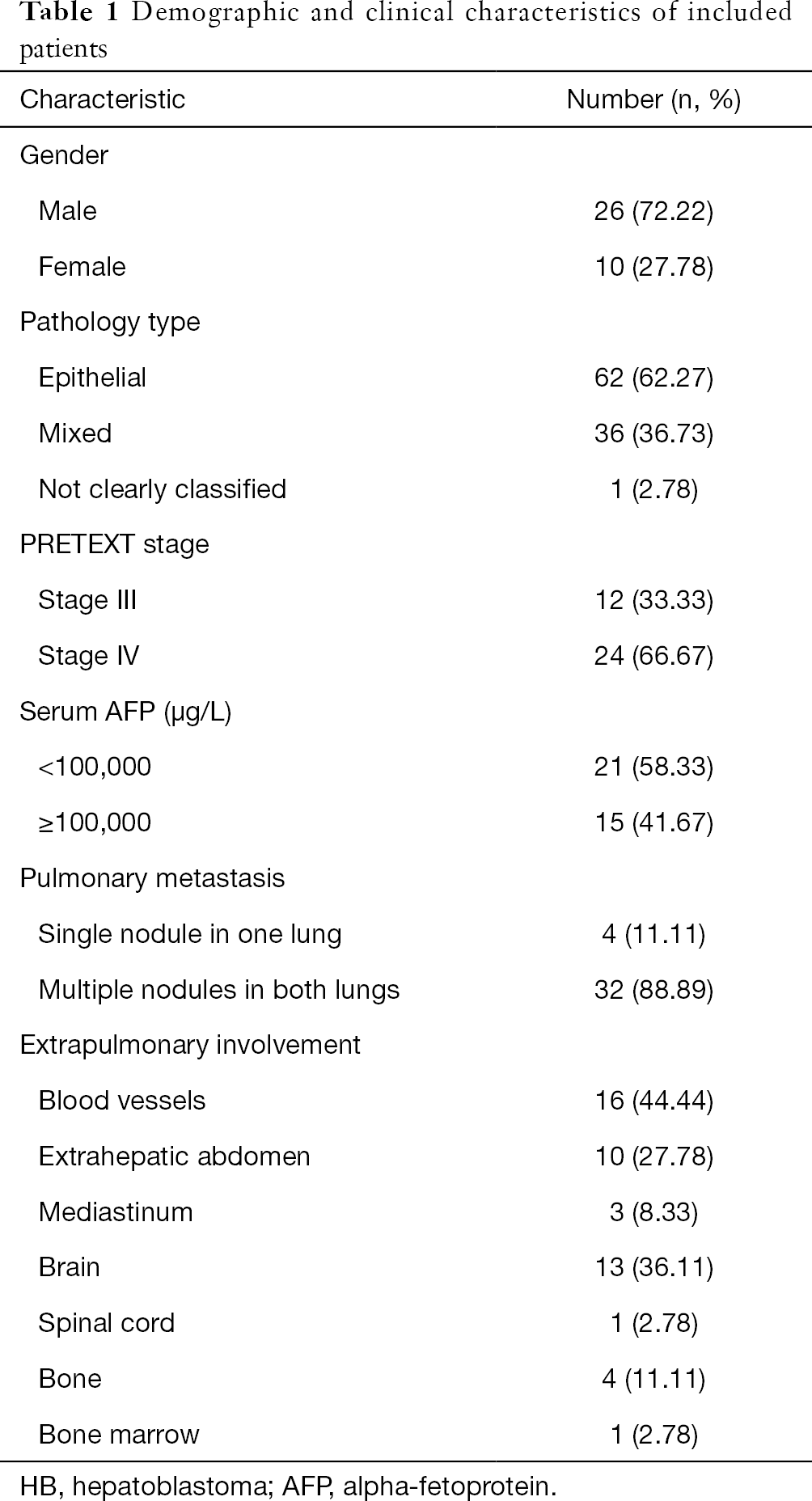 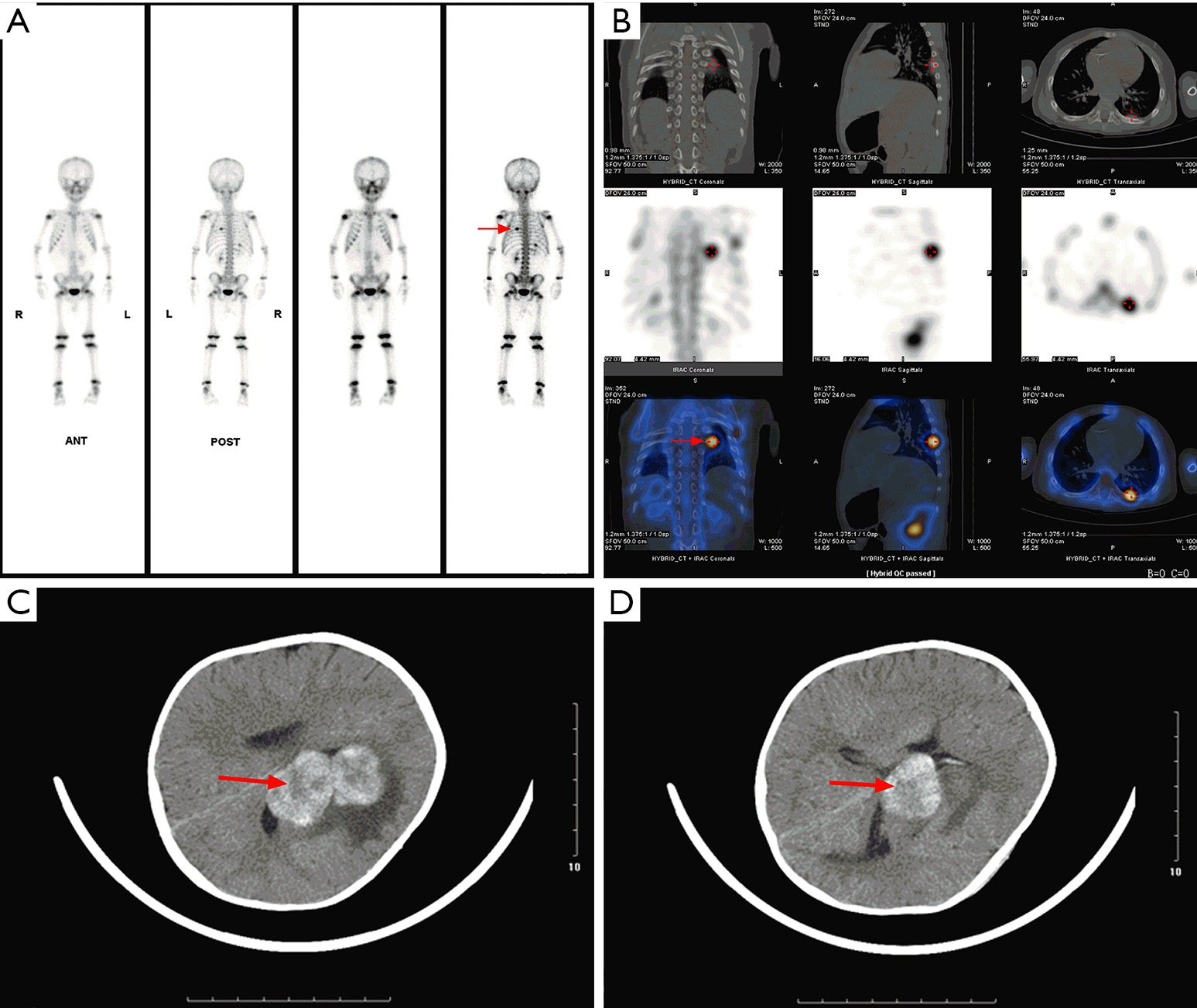 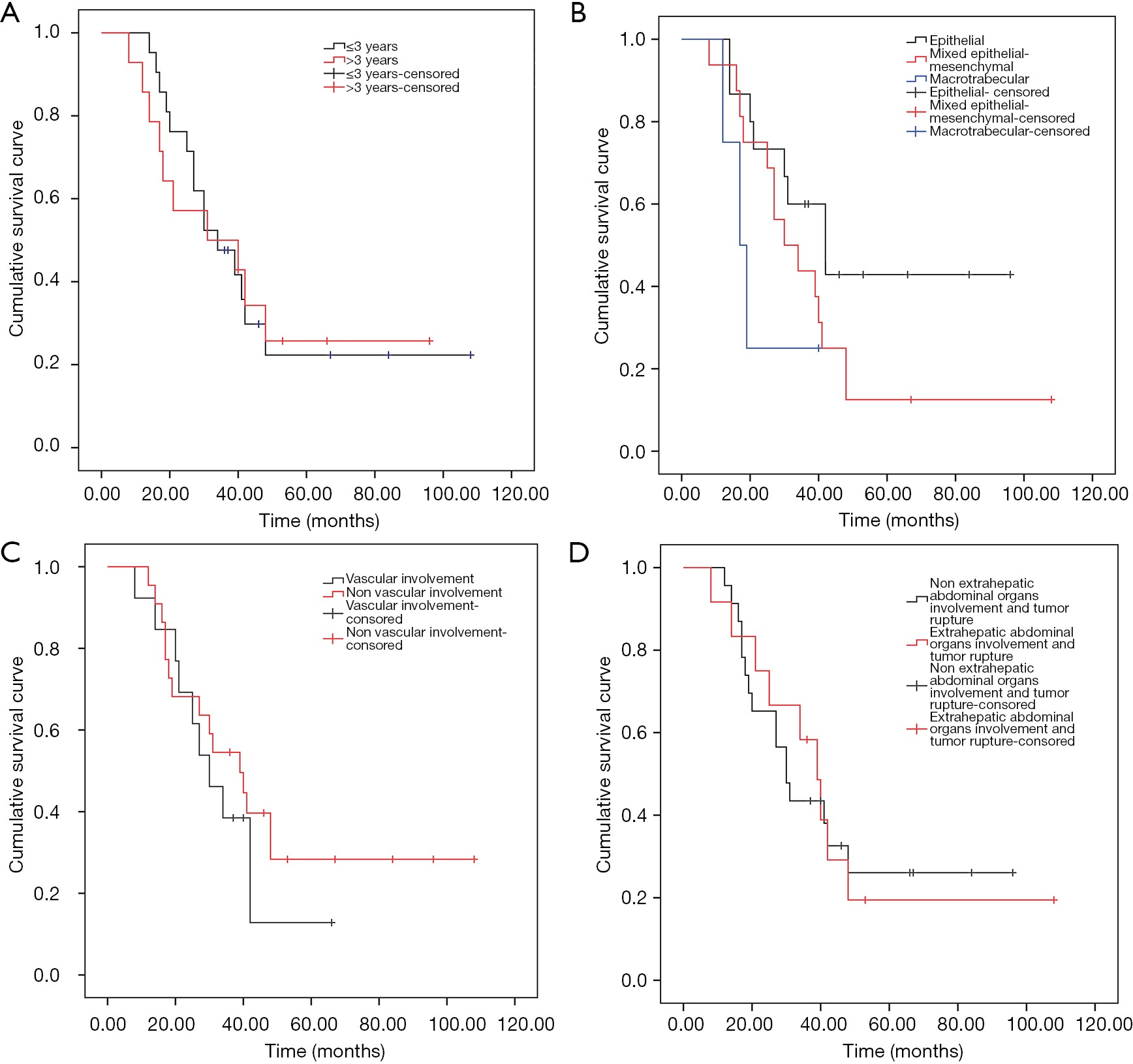 HB is the most common primary hepatic tumor in pediatric population. The incidence of HB has been increasing in the past 30 years, with an annual increase of up to 2.7% (20), which may be related to the improved survival rate in premature and very low birth weight infants (19). Although treatment outcome has improved over the past two decades, the presence of distant metastasis at the time of diagnosis is still the strongest predictor of poor prognosis (15,23). Lung is the most common site of distant metastasis of HB, and there are few reports on the prognosis in HB patients with pulmonary metastasis and extrapulmonary involvement (13). In this study, we aimed to analyze the clinical characteristics and outcome in HB children with pulmonary metastasis and extrapulmonary involvement.

The common sites of extrapulmonary metastasis of HB were blood vessels, brain and extrahepatic abdominal organs. The overall prognosis of HB patients with lung metastasis and extrapulmonary involvement was poor, especially those with PRETEXT stage IV, high AFP level or distant metastases. These results may provide some valuable information for further treatment.

Funding: This work was supported by “Climbing the Peak” Talent Plan of Beijing Municipal Administration of Hospital [number DFL20180201].

Reporting Checklist: The authors have completed the STROBE reporting checklist. Available at http://dx.doi.org/10.21037/tcr-20-1876

Conflicts of Interest: All authors have completed the ICMJE uniform disclosure form (available at http://dx.doi.org/10.21037/tcr-20-1876). The authors have no conflicts of interest to declare.

Ethical Statement: The authors are accountable for all aspects of the work in ensuring that questions related to the accuracy or integrity of any part of the work are appropriately investigated and resolved. The study was conducted in accordance with the Declaration of Helsinki (as revised in 2013). The study was approved by the ethics committee of the Beijing Tongren Hospital, Capital Medical University (No.: 20180212) and informed consent was taken from all participants and their guardians.