Colorectal cancer (CRC) is a common malignant tumor of the digestive tract clinically, which ranks third and fifth of the incidence and mortality of all tumors (1,2). The main clinical treatment for patients with colorectal cancer is surgical resection, which has a significant short-term effect, but the higher recurrence and metastasis rate in the later stage still seriously threatens the safety of patients (3). How to find relapsed patients as soon as possible and early intervention treatment are the main means to prolong their lives, and the research on the risk factors that affect the prognosis of colorectal cancer patients mostly focuses on macroscopic pathological parameters and common tumor markers (1,3,4). As a loose connective tissue composed of fat cells, adipose tissue is also an essential endocrine organ of the human body, which can mainly secrete adipokines, including adiponectin, omentin-1, leptin (5). Studies have shown that adipokines have a specific relationship with pancreatic cancer (6), ovarian cancer (7), and other cancers. And omentin-1 can affect the proliferation and apoptosis of colorectal cancer stem cells through the PI3K/Akt signaling pathway (8), The abnormal activation of these regulatory adipokines and their receptors also plays a vital role in the occurrence and progression of CRC (9). However, the relationship of omentin-1 with the prognosis of patients with CRC is not clear. In this study, a prospective follow-up study was conducted to explore the expression of adipokinin omentin-1 in patients with CRC and its correlation with the prognosis of patients. We present the following article in accordance with the REMARK reporting checklist (available at http://dx.doi.org/10.21037/tcr-20-2836).

Three hundred nineteen patients who underwent radical resection of CRC in our hospital from June 2015 to March 2018 were enrolled as the case group, including 204 cases of colon cancer and 115 cases of rectal cancer. The ratio of male to female was 182:137, with an average age of (58.65±12.85) years old. There were 104 patients with lymph node metastasis. TNM staging situation was: 21 cases in stage I, 114 cases in stage II, 136 cases in stage III, 48 cases in stage IV. Simultaneously, we randomly selected 300 healthy people who had no apparent physiological diseases by health examinations in our hospital during the same period and agreed to take part in this investigation and study as a control group. In this group, the male to female ratio was 178:128, with an average age of (57.42±13.04) years old. There is no statistically significant difference between the two groups (P>0.05). This study was approved by Beijing Luhe Hospital, Affiliated to Capital Medical University (No. 2020-LHKY-033-01). The study was conducted in accordance with the Declaration of Helsinki (as revised in 2013). Written informed consent was obtained from the patient.

The inclusion criteria for the study were (I) patients with CRC diagnosed by pathological examination. (II) Not receiving radiotherapy and chemotherapy before the operation. (III) No history of the malignant tumor. (IV) Complete clinical data. (V) Given informed consent to this study. The exclusion criteria for the study were (I) with intestinal inflammation or familial polyposis. (II) Distant metastasis was found before the operation. (III) Other diseases accompanied the patient, including severe liver and kidney dysfunction, cardiac insufficiency. (IV) There was a recurrence within one month after surgery or death.

All the subjects were fasted for over 12 hours to collect 2 mL of fasting venous blood. After adding 120 µL of aprotinin, the blood sample was centrifuged at 3,000 r/min to separate the plasma. And the level of omentin-1 in plasma was detected by the enzyme-linked immunosorbent method (ELISA).

Standards for recurrence and metastasis after follow-up

Postoperative follow-up was conducted by telephone, outpatient, and other ways. Follow-up was conducted every three months for the first year after the surgery; then, every six months for the next year. The follow-up time was up to March 31, 2020. Follow-up outcomes include recurrence and death. The recurrence and metastasis were defined by undergoing B-ultrasound, CT, X-ray, and other imaging examinations, and confirmed by clinical pathology. Then, the pathology was retrieved through colonoscopy and reoperation. The death case was retrieved through family members or retrieved relevant information from the Public Security Bureau.

The measurement data is expressed as mean ± standard deviation () and analyzed by the t-test of independent samples. The data within the group were compared using a paired t-test. Count data is expressed as a percentage number [n (%)] and analyzed using the χ2 test. Independent risk factors of recurrence and survival were screened using multivariate COX regression analysis. The data was analyzed using SPSS 21.0 statistical software (IBM, USA), and results with P<0.05 were considered statistically significant. 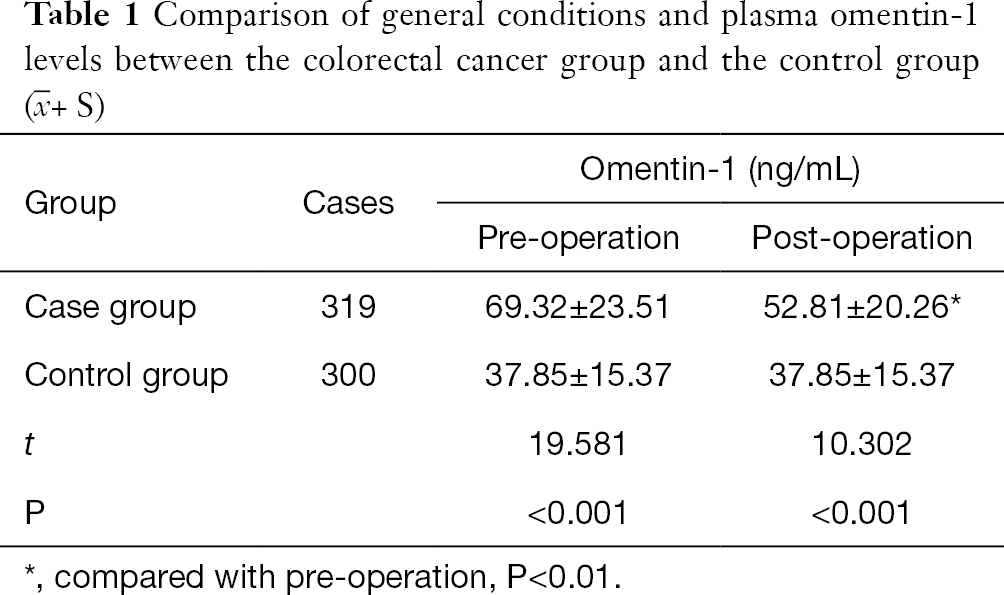 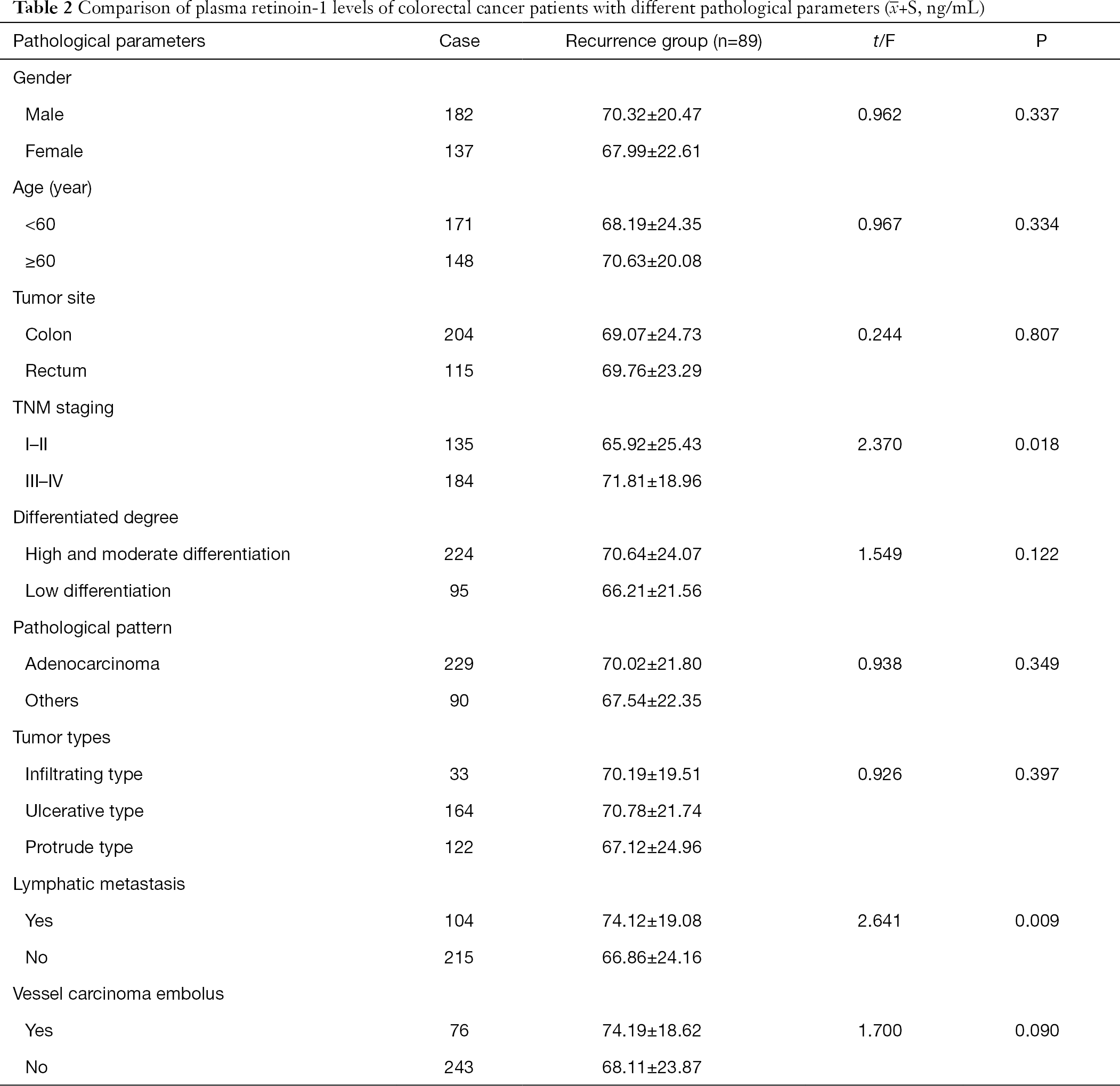 Univariate analysis of recurrence and survival in patients with CRC 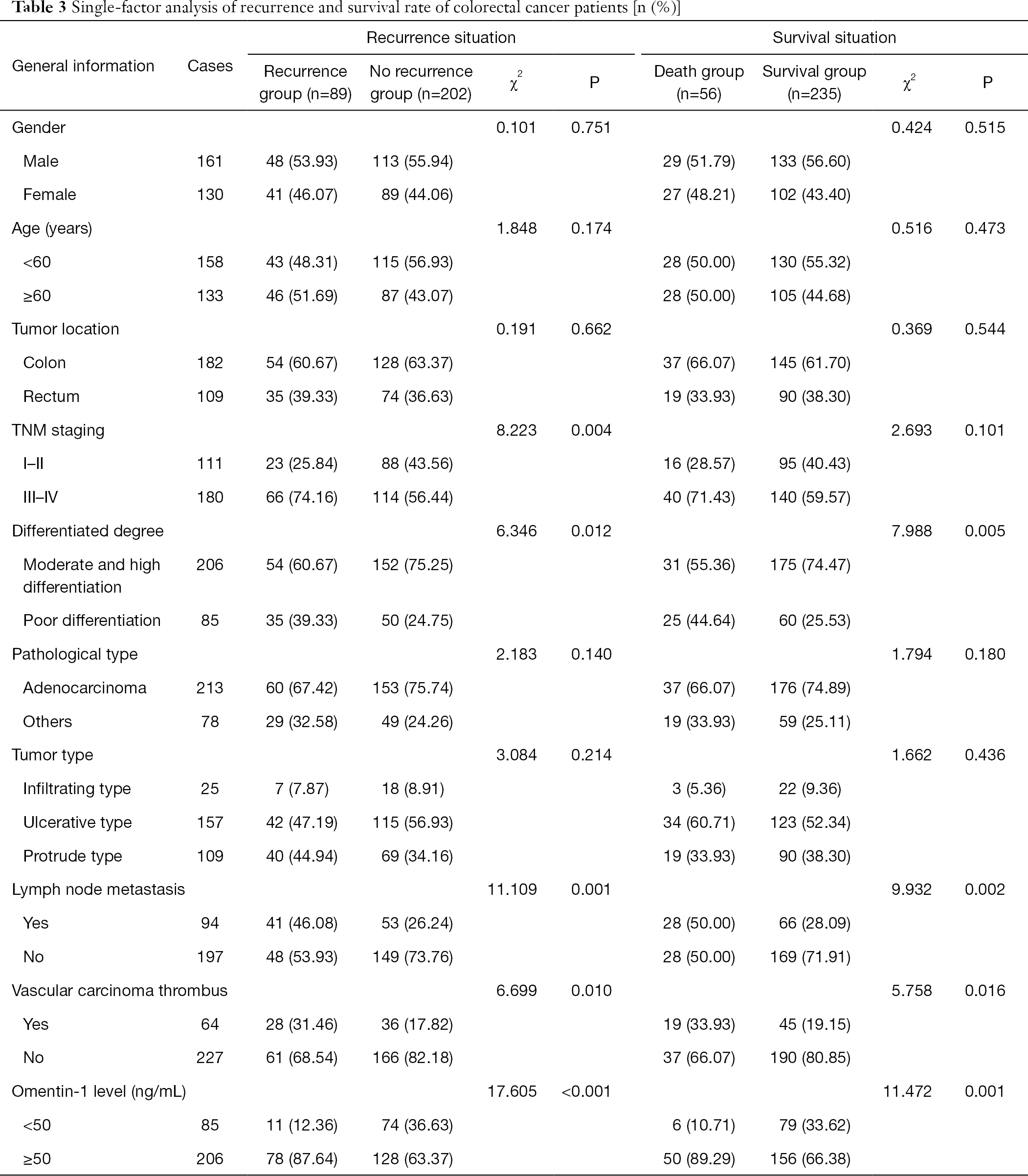 Multivariate COX regression analysis of recurrence in patients with CRC

Colorectal cancer, as most common human malignant tumor with the third morbidity and fifth death rate, has received more and more attention from clinicians and experts and scholars. The risk factors that affect the development and prognosis of colorectal cancer are also increasingly refined to some microRNAs, phosphatase-tensin gene and other microscopic molecules (10,11), including some endocrine adipokines. Surgical resection is the primary clinical treatment for patients with CRC, which shows a significant short-term effect, but the high recurrence and metastasis rate in the later stages still seriously threatens the safety of patients (9). How to find the relapse of patients as early as possible and then perform early intervention treatment is the key point to prolong the life of patients with CRC. The research on the risk factors affecting the prognosis of CRC patients has gradually transferred from the macroscopic angle, including age, TNM staging, and lymph node metastasis, to the microscopic molecular perspectives, including microRNA and genes including phosphatase tensin (PTEN) (10,11).

The relationship between endocrine adipokines and CRC has also received increased attention. Some researchers believe that adipokines may be related to the occurrence and development of CRC (5). It has been shown adiponectin, a type of adipocytokine, is a risk factor for the onset of CRC (12). Other important adipocytokines, omentin-1, can inhibit the proliferation and promote the apoptosis of colon cancer stem cells via the PI3K/Akt signaling pathway (13), which is closely related to the patient’s condition.

The results of this study showed that the level of plasma omentin-1 in the CRC case group after surgery was significantly decreased, but still higher than that of the control group. And among patients with colorectal cancer, the level of plasma omentin-1 of pateints with TNM staging III–IV and lymph node metastasis was significantly higher than that of TNM staging I–II or without lymph node metastasis (P<0.05). Omentin-1 is a significant factor secreted by adipocytes, selectively expressed in omental adipose tissue and highly expressed in plasma. Studies have shown that omentin-1 has excellent sensitivity and specificity for distinguishing patients with and without CRC. A sensitivity of over 80% and a specificity of around 70% was observed (14). Meanwhile, the significant reduction of the omentin-1 level after surgery shows omentin-1 is related to the condition of patients with CRC. Research also shows omentin-1 can promote the proliferation of colon cancer cell lines SW480 (15), and can also inhibit its apoptosis simultaneously, which shows omentin-1 might be used as a biomarker for the development of CRC patients.

Follow-up results in this study showed that the recurrence and metastasis rate was 30.58% (89/291), and the mortality rate was 19.24% (56/291), which shows better efficacy than the previously reported recurrence rate of 60% (1) and metastasis rate of 41.35% (3). This phenomenon may receive help from the current development of medical technology. The results of the multivariable analysis showed TNM staging, lymph node metastasis, and how much differentiation is all independent risk factors affecting the recurrence rate and survival of patients, which are consistent with the results of other studies (1,16). Patients with higher TNM stage and poor differentiation of tumors have a higher malignant, the tumor, and a higher probability of metastasis, which directly affects the patient’s postoperative recurrence and survival time (17). As one of the significant ways of tumor metastasis, the metastasis rate of lymph node metastasis has a significant relation to the long-term prognosis of patients (18,19). However, because of the different conditions of patients and different follow-up times, recurrence and mortality are inevitably different, and the influencing factors and results are also different. Besides, results in this study also showed that omentin-1 was an independent risk factor affecting the recurrence and metastasis of CRC patients, and an independent risk factor affecting patient survival. It is believed in some literature that omentin-1 can activate the intracellular serine/threonine-protein kinase Akt in the absence of insulin by enhancing the phosphorylation of Akt, which can promote cell proliferation and metabolism, inhibit cell apoptosis, and increase the secretion of angiogenic cytokines to affect the permeability and regeneration of blood vessels and play an essential role in carcinogenicity (5). The study of mouse bone marrow mesenchymal hepatocyte experiment shows that that omentin-1 can promote the secretion of vascular growth factors by vascular endothelial cells and improve the ability of stem cells to induce angiogenesis. While after blocking PI3K/Akt signaling, the effect of omentin-1 on the proliferation of stem cells disappeared (20). Therefore, during the development of CRC, omentin-1 plays a role in promoting the proliferation of tumor cells and the formation of peripheral blood vessels by activating the Akt related signaling pathways. Simultaneously, it can also increase the permeability of blood vessels to be more conducive to the metastasis of tumor cells, shortening the survival time of patients.

In summary, plasma omentin-1 levels are highly expressed in patients with CRC, and is closely related to TNM staging and lymph node metastasis, which is an independent factor affecting postoperative recurrence and survival, suggesting that plasma omentin-1 might be a biomarker to predict the recurrence of colorectal patients.

Reporting Checklist: The authors have completed the REMARK reporting checklist. Available at http://dx.doi.org/10.21037/tcr-20-2836

Conflicts of Interest: All authors have completed the ICMJE uniform disclosure form (available at http://dx.doi.org/10.21037/tcr-20-2836). The authors have no conflicts of interest to declare.

Ethical Statement: The authors are accountable for all aspects of the work in ensuring that questions related to the accuracy or integrity of any part of the work are appropriately investigated and resolved. This study was approved by Beijing Luhe Hospital, Affiliated to Capital Medical University (No. 2020-LHKY-033-01). The study was conducted in accordance with the Declaration of Helsinki (as revised in 2013). Written informed consent was obtained from the patient.