Head and neck squamous cell carcinoma (HNSC) consists of a group of tumors caused by the squamous epithelium in the oral epithelium, oropharynx, larynx, and hypopharynx (1). HNSC is one of the most common malignancies and the sixth most common in the world (2). The United States recorded about 50,000 new HNSCC cases and 10,000 deaths in 2017. Rates are rising about 1 percent a year in whites, and more than twice as high in men as in women. Early diagnosis of cancer is one of the most important factors leading to less widespread and more successful treatment and better outcomes for patients (3).

Tumorigenesis is a complex pathological process that involves multiple genetic changes, including overexpression of oncogenes and/or inactivation of tumor suppressor genes (4). Despite surgery, radiation, and chemotherapy, about half of all patients die from the disease. The risk stratification of HNSCC depends on the anatomical site, staging, and histological characteristics of the tumor. In addition to the status of HPV, many molecular and clinical risk factors have been studied that limit its clinical usefulness (5).

In this study, we download the original dataset GSE53819 from Gene Expression Omnibus (GEO) (http://www.ncbi.nlm.nih.gov/geo/) website, the database is used to archive and store a public database (6). By querying microarray data, gene expression profiles of HNSC patients were compared with normal healthy controls to determine the differentially expressed genes (DEGs). Gene ontology (GO) and pathway enrichment analysis was then performed on the online website DAVID 6.8 (https://david.ncifcrf.gov/). We then constructed a protein-protein interaction (PPI) network for DEGs and conducted a module analysis of this network (7). Finally, we analyzed the survival of the hub genes. Novel genes related to patient prognosis were screened from hub genes, which had not been previously reported. For example: CCR8, CCDC39, CNTN5, MSLN, and CHGB. Our study provides new information on the molecular etiology and pathogenesis of HNSC and provides new potential molecular targets for treatment.

GSE53819 is a gene expression profile of HNSC and belongs to the Agilent-014850 Whole Human Genome Microarray 4x44K G4112F (Probe Name version), which can be downloaded from the GEO database and executed on the GPL6480 platform (8). GSE53819 contains specimens from 18 patients with HNSC and paired healthy head and neck tissues. All the specimens were collected before any chemotherapy.

Bioconductor provides tools for the analysis and comprehension of high-throughput genomic data. Bioconductor uses the R statistical programming language and is open source and open development. RStudio is an integrated development environment (IDE) for R (10). It includes a console, syntax-highlighting editor that supports direct code execution, as well as tools for plotting, history, debugging and workspace management. We downloaded the limma package from the Bioconductor and imported it into Rstudio. We used the Benjamini and Hochberg methods, genes with |log2-fold change (FC)| ≥2 and adjusted P values <0.01 were used in the next analysis stage (11).

DAVID now provides a comprehensive set of functional annotation tools for investigators to understand the biological meaning behind large list of genes. We used the DAVID online website to perform GO and Kyoto Encyclopedia of Genes and Genomes (KEGG) analysis of DEGs. GO analysis includes three major categories: biological process (BP), cellular component (CC), and molecular function (MF) (12). The KEGG analysis is to find out the signal pathways for these differential expression genes enrichment. P<0.05 as the cutoff criterion was considered statistically significant.

STRING is part of the ELIXIR infrastructure: it is one of ELIXIR’s Core Data (version 11.0; https://string-db.org/). We uploaded the differential expressed genes to the STRING website for analysis with a minimum required interaction score of 0.7000. We found that 572 genes and 547 edges were present in the PPI network, then we output the analysis results as a TSV file (13). Cytoscape, a free visualization software, is a bioinformatics software platform for integrated models of biomolecular interaction networks (version 3.7.2; https://cytoscape.org/). To further analyze the PPI network, we uploaded the TSV file to Cytoscape, and the whole PPI network consisted of 255 genes and 547 edges. Molecular complex detection (MCODE), a plug-in of Cytoscape software was used to conducted module analysis of the PPI network. We set K-score =6 and other parameters were set by default (14). Module genes are considered as hub genes.

The GEPIA server has been running for two years and processed ~280,000 analysis requests for ~110,000 users from 42 countries (http://gepia.cancer-pku.cn/) (15). The patients in The Cancer Genome Atlas (TCGA)/GTEx dataset were divided into high and low expression groups using the median transcripts per kilobase million (TPM) as a breakpoint, and significance was determined using a log-rank test with P<0.05. We conducted an overall survival analysis of the hub genes in (HNSC) TCGA/GTEx database to observe the effect of the hub gene on the overall survival rate of HNSC patients.

Co-expression analysis of these hub genes

After previous screening, we obtained genes associated with the prognosis of head and neck cancer patients, and we performed co-expression network analysis of these genes. We used the STRING database to upload prognostic genes to the database and set the threshold: minimum required interaction score 0.400. And the biological function of these key genes was analyzed. The study was conducted in accordance with the Declaration of Helsinki (as revised in 2013).

P<0.05 was considered statistically significant, the statistical analyses were conducted by employing the R (version 3.4.3).

In this study, we selected a microarray dataset related to human HNSC from the GEO database. GSE53819 contains 18 HNSC tissues and 18 normal tissues. Using both |log2-fold change (FC)| ≥2 and adjusted P value <0.01 criteria, a total of 604 genes were identified from GSE53819, including 159 upregulated genes and 445 downregulated genes (Table 1). Whereafter, the volcano map and heatmap were displayed (Figure 1A,B). 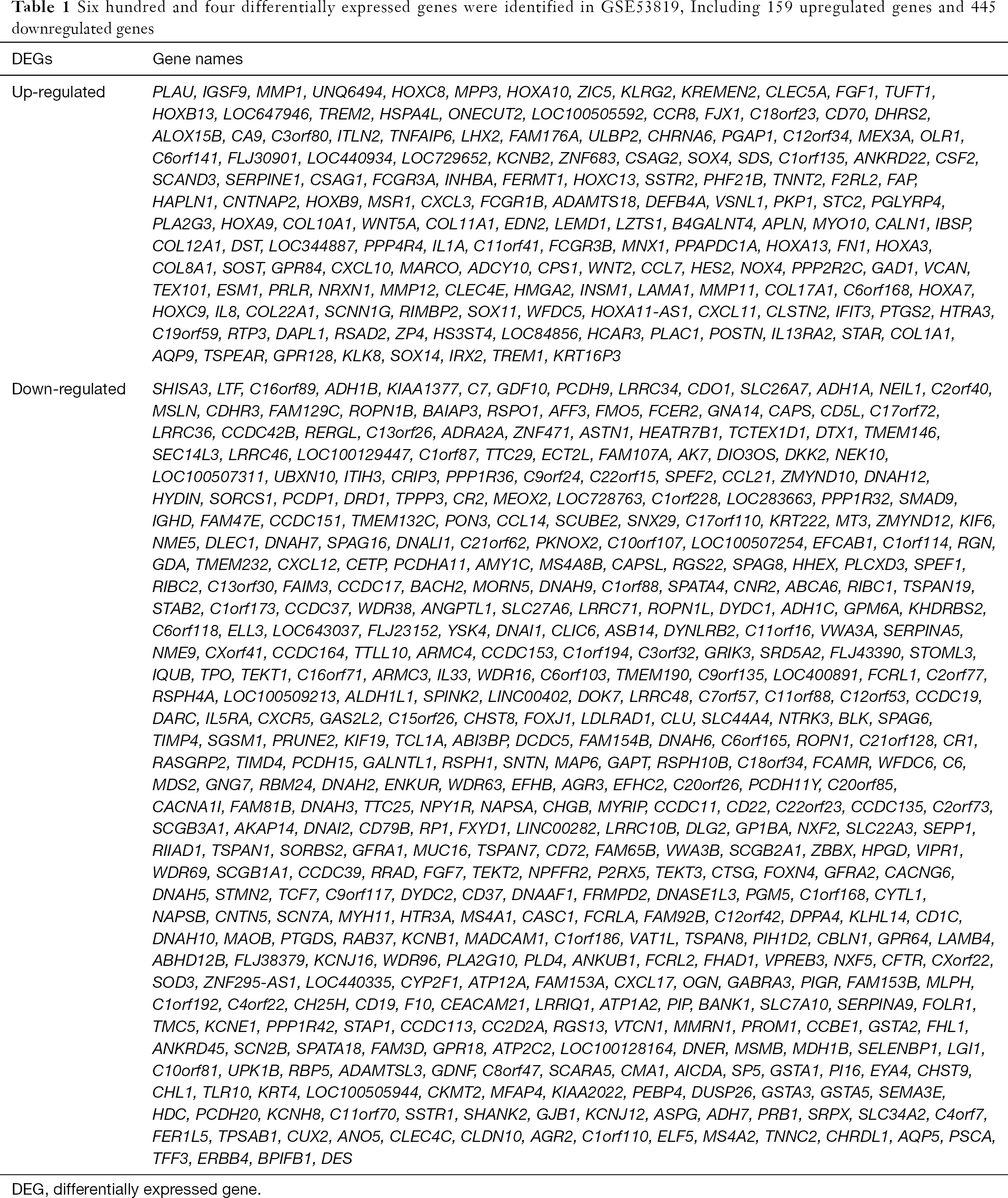 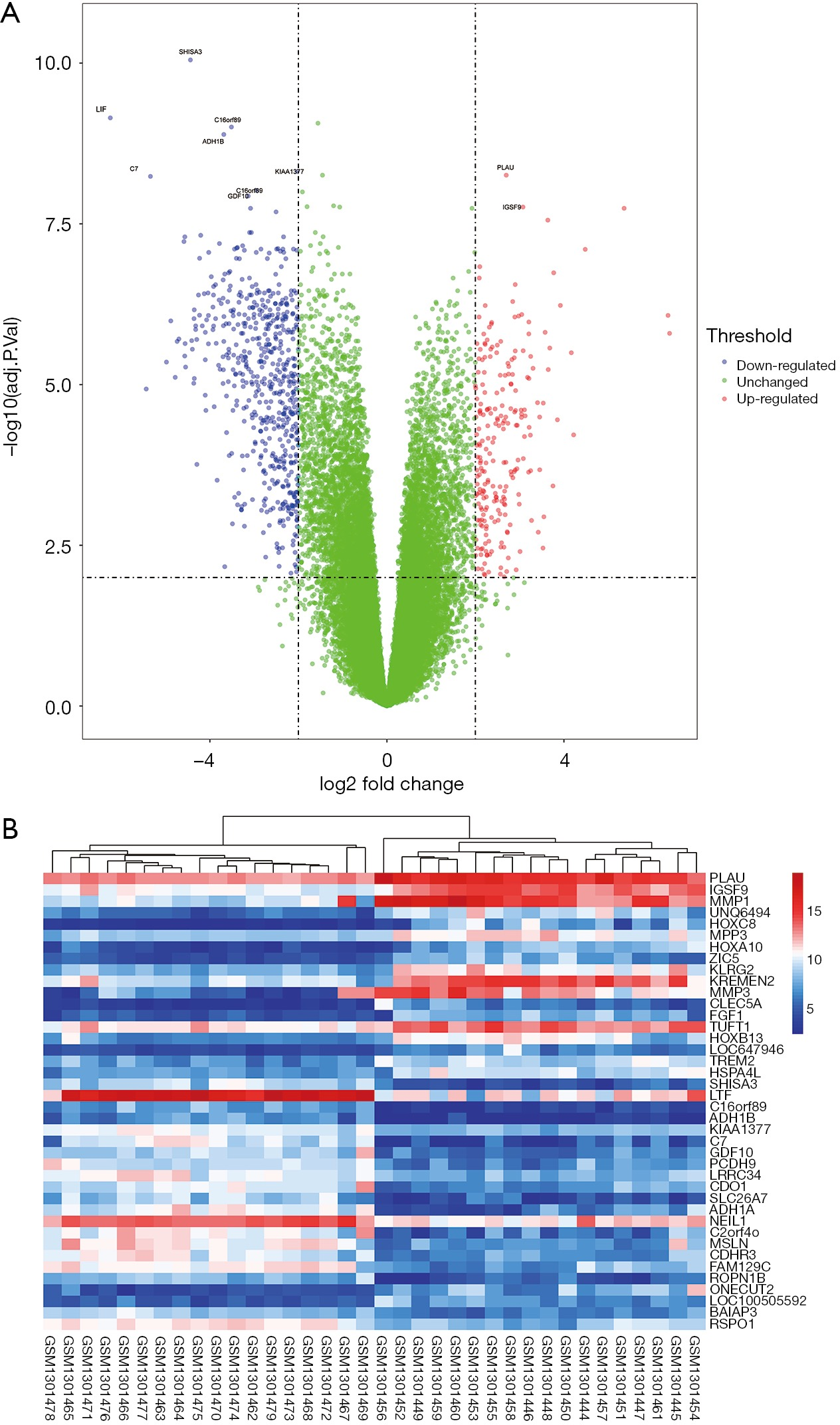 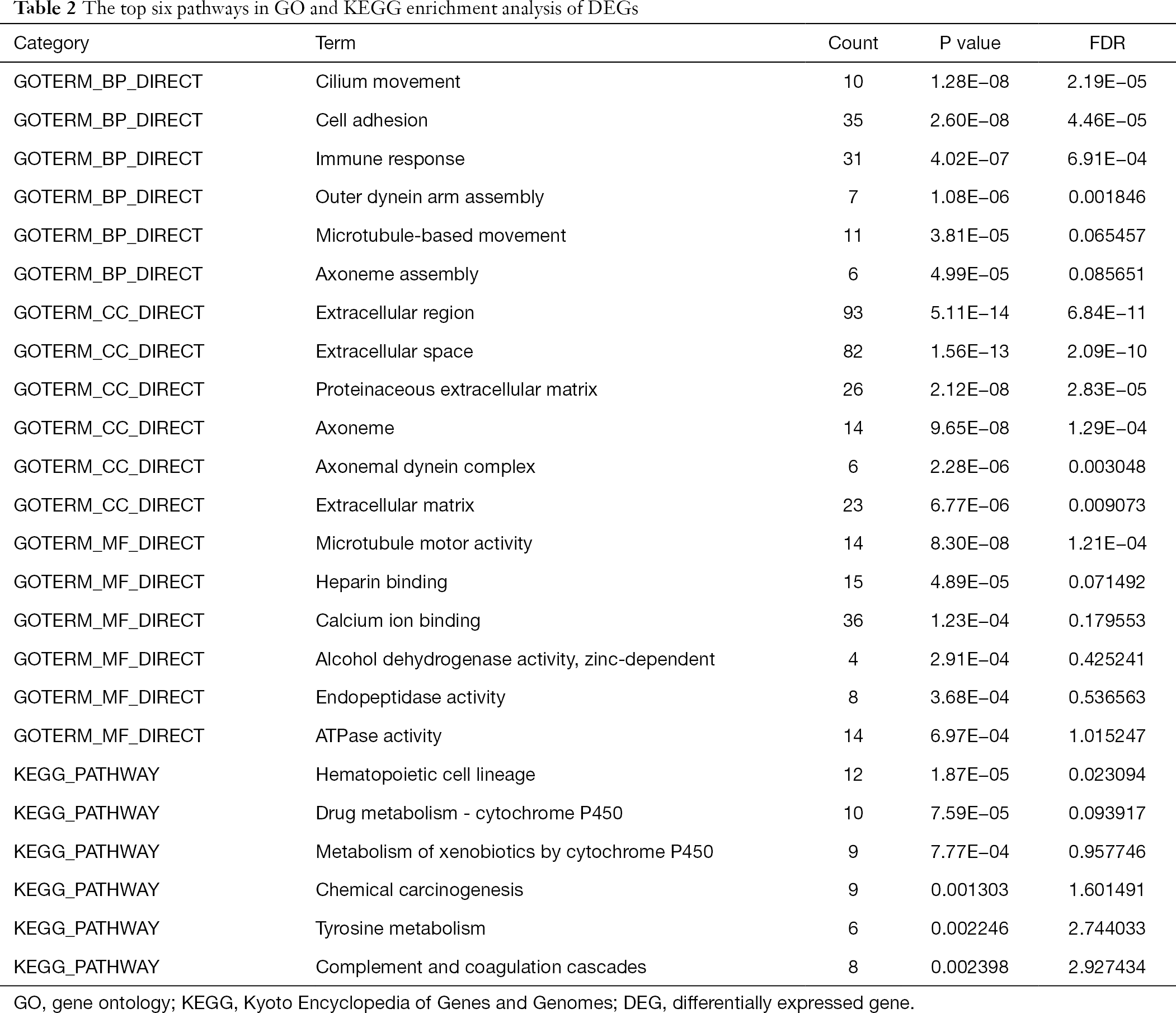 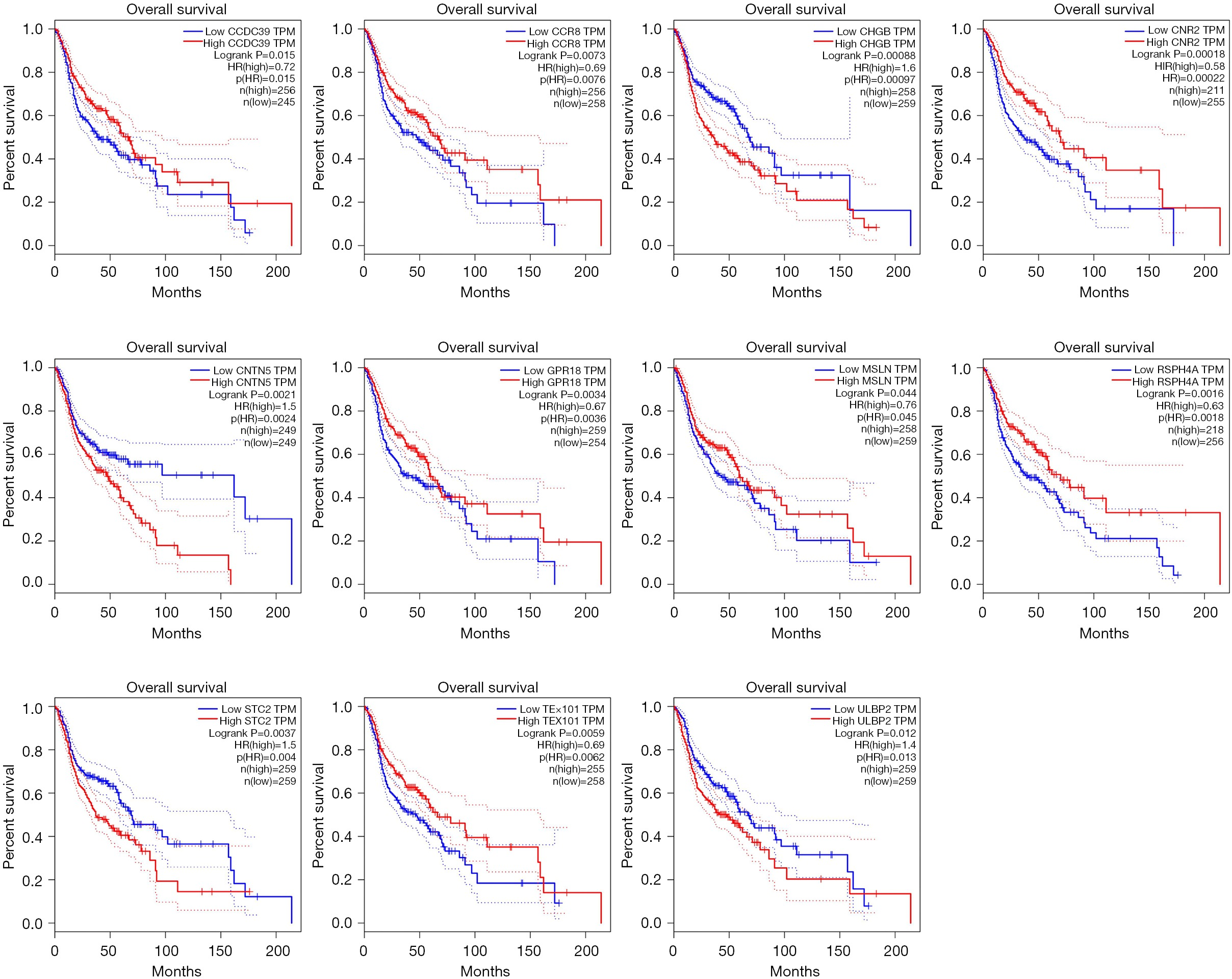 Co-expression analysis of these hub genes

These key genes were uploaded to the STRING website and Cytoscape database for gene co-expression network analysis among key genes, and the analysis results showed that MSLN had the strongest correlation with other genes (Figure 5A). Then, the biological function of these genes was analyzed, and the results showed that these genes were mainly concentrated in: post-translational modification: synthesis of GPI-anchored proteins, anchored component of membrane, regulation of insulin-like growth factor (IGF) transport and uptake by insulin-like growth factor binding proteins (IGFBPs), post-translational protein modification, post-translational protein phosphorylation, and metabolism of proteins (Figure 5B).

The purpose of this study was to identify potential HNSC related genes and pathways by comparing tumor tissues of HNSC patients with normal tissues. Finally, 193 up-regulated DEGs and 513 down-regulated DEGs were identified. Then, we performed the GO and KEGG annotation analyses on DEGs. Subsequently, a PPI network was constructed, 256 nodes were identified with 553 edges, and three important modules from PPI was selected to further verify overall survival in the (HNSC) TCGA/GTEx database. Finally, a total of eleven genes, namely CCR8, GPR18, CNR2, RSPH4A, CCDC39, ULBP2, TEX101, CNTN5, MSLN, STC2, and CHGB were significantly associated with patients’ prognostic.

C-C motif chemokine receptor 8 (CCR8), Eruslanov’s group identified monocytes and granulocyte myeloid subsets in peripheral blood of cancer patients with urothelial and renal carcinoma show increased expression of the chemokine receptor CCR8, upregulation of CCR8 expression was also detected in tumor-infiltrating white blood cells. Notably, CCR8 expression in cancer tissues was enriched in tumor-infiltrating CD11b myeloid cells, mainly in TAMs (16). Our results showed that CCR8 was upregulated in HNSC and was associated with poor prognosis in patients, so we hypothesized that this gene could be used as a prognostic marker for patients.

G protein-coupled receptor 18 (GPR18) associated with the occurrence and metastasis of human cancer, we conducted in melanoma cells function experiments show that GPR18 is expression of the most abundant melanoma metastasis of all orphans GPCR, possess of sexual activity and inhibition of apoptosis, suggests GPR18 plays an important role in tumor cell survival, is considered to be one of the most ideal targets for drug development (17). Therefore, we hypothesized that GPR18 is also a therapeutic target in HNSC.

Cannabinoid receptor 2 (CNR2) has been reported to relieve tumor-related symptoms (including nausea, anorexia and neuropathic pain) in palliative care for cancer patients. Besides, they may slow tumor progression in breast cancer patients. We suspect that CNR2 could be new therapeutic targets in HNSC (18).

Radial spoke head component 4A (RSPH4A) and coiled-coil domain-containing 39CCDC39 are associated with a primary ciliary movement disorder (19,20). It is also associated with internal dynein arm (IDA) defects and axon disorders. However, their contribution to the disease remains unclear. Our results suggest that CCDC39 can be used as a biological target for treatment.

UL16 binding protein 2 (ULBP2), Secil’s team has shown that ULBP2 (a ligand of NKG2D) is highly expressed 23 in transformed cells and is thought to provide a ligand for NK cells that facilitates tumor cell death, serving as a prognostic and predictive biomarker for colon cancer (21).

Testis expressed 101 (TEX101), the expression level of TEX101 is elevated in basal cell carcinoma, and TEX101 may be a target for cancer immunotherapy (22). Therefore, based on our analysis, we hypothesized that high expression of TEX101 in HNSC might be associated with poor prognosis.

Contactin5 (CNTN5), a six-member subgroup of IgCAM, has significant brain expression and function. CNTN5 was identified as a candidate gene for neurodevelopmental disorders [especially autism spectrum disorders (ASD)] and intellectual disabilities, indicating that they play an important role in neurodevelopmental processes (23). The results of our analysis showed that genes from HNSC can be used as prognostic biomarkers.

Stanniocalcin 2 (STC2), is a glycoprotein hormone involved in many BPs and a secreted protein that regulates the progression of malignant tumors. The results showed that the prognosis of patients with high STC2 expression in colorectal cancer was poor. Besides, STC2 expression was significantly correlated with lymph node metastasis, distant metastasis, and clinical staging. Also, high STC2 expression was associated with poor prognosis in patients undergoing CRC surgery (25). These findings suggest that STC2 may be involved in the progression of CRC and may serve as a useful predictor of prognosis.

In this study, we investigated the potential candidate gene and signal pathway of DEGs in HNSC. Genes were selected by DEG, GO, KEGG, and PPI analysis. This study has improved our understanding of the pathogenesis and underlying molecular mechanism in HNSC. These selected candidate genes and pathways could give us a clue to new therapeutic targets for the treatment of HNSC.

Conflicts of Interest: All authors have completed the ICMJE uniform disclosure form (available at http://dx.doi.org/10.21037/tcr-20-805). The authors have no conflicts of interest to declare.

Ethical Statement: The authors are accountable for all aspects of the work in ensuring that questions related to the accuracy or integrity of any part of the work are appropriately investigated and resolved. The study was conducted in accordance with the Declaration of Helsinki (as revised in 2013). For human datasets mentioned in this study, please refer to the original article (PMID: 24763226). We just re-analyzed the open accessed datasets, and no ethical approval was required by the local ethics committees.