Discovered differentially expressed lncRNA AC010973.2 can act as a diagnostic and prognostic biomarker for colon adenocarcinoma

Colorectal cancer (CRC) is the third most frequently diagnosed malignancy and one of the leading causes of cancer-related mortality globally (1). Colon adenocarcinoma (COAD) is a common type of CRC (2). Recent research on COAD has made significant progress, but the data show that the morbidity and mortality rates of COAD are increasing (3). Findings have demonstrated that COAD can be treated successfully when identified at an early stage (4). The disease can cause blood in the stool, stomach pain, and a change in bowel movements, but some people remain asymptomatic, which poses a challenge for early diagnosis (5). Biomarkers currently play an essential role in the detection and treatment of patients with COAD (6).

In this study, we downloaded the COAD transcript sequencing data from The Cancer Genome Atlas (TCGA). After analysis to obtain differentially expressed lncRNA, a series of bioinformatics analyses was carried out on these differentially expressed lncRNAs to construct a COAD diagnostic model. Based on the results, we determined that lncRNA AC010973.2 can be used as a reliable prognostic marker for COAD. We present the following article in accordance with the TRIPOD reporting checklist (available at http://dx.doi.org/10.21037/tcr-20-2011).

The gene expression quantification and corresponding clinical information of COAD patients were obtained from TCGA data portal (https://tcga-data.nci.nih.gov/tcga/). The obtained population comprised of 480 COAD tumor tissue samples and 41 adjacent non-tumor tissue samples (from 41 COAD patients). Both the mRNA expression data and the clinicopathologic characteristics of COAD are publicly available on TCGA.

After obtaining the raw data of COAD from TCGA, we re-annotated it using gene transfer format (GTF) (

After obtaining the survival time and survival status information of the COAD patients from TCGA, the lncRNA expression data and the clinical data were integrated through the patient ID, using Perl Language. Death was marked as 1 and survival as 0. Univariate Cox models were used to determine the association between the expression level of lncRNAs and the patient’s overall survival (OS). Differences with P<0.05 were considered statistically significant. We used the survival package of R to conduct a univariate cox analysis on the above integrated data to screen for lncRNAs associated with survival, with P<0.001 as the standard. We also used the survminer package of R to perform a multivariate analysis. According to the risk value obtained for each patient from the multivariate analysis, we calculated the median risk value for these patients. Based on this, we divided the patients into high-risk and low-risk groups. We then calculate the survival difference between the groups, using a survival curve and a forest map according to the hazard ratio. To display the survival risk data and the status of each patient more intuitively, we plotted the risk heatmap, risk curve, and survival status chart according to the patient’s risk value. Finally, we constructed a COAD-lncRNA risk model (Cox model).

Assessment of the Cox model

Through the DOSE package of R/Bioconductor, and the clusterProfiler, pathview, and org.Hs.eg.db packages of R, we conducted an enrichment analysis of lncRNAs in the Cox model. Our pathway enrichment analyses included mainly tools from the Gene Ontology (GO) (19) and the Kyoto Encyclopedia of Genes and Genomes (KEGG) (20).

The survival of lncRNA-related PCGs in COAD patients was verified by GEPIA. The survival results are presented as diagrams. The hazard ratio was calculated based on the Cox proportional-hazards (PH) model; cutoff-high and cutoff-low were both 50%.

Prediction of miRNA targets for lncRNA

To further explore the potential role of lncRNA in colon cancer, we used the DIANA-LncBase v3 (22) online database to predict the miRNA targets of lncRNA. This database (www.microrna.gr/LncBase) is a reference repository with experimentally supported miRNA targets on non-coding transcripts. 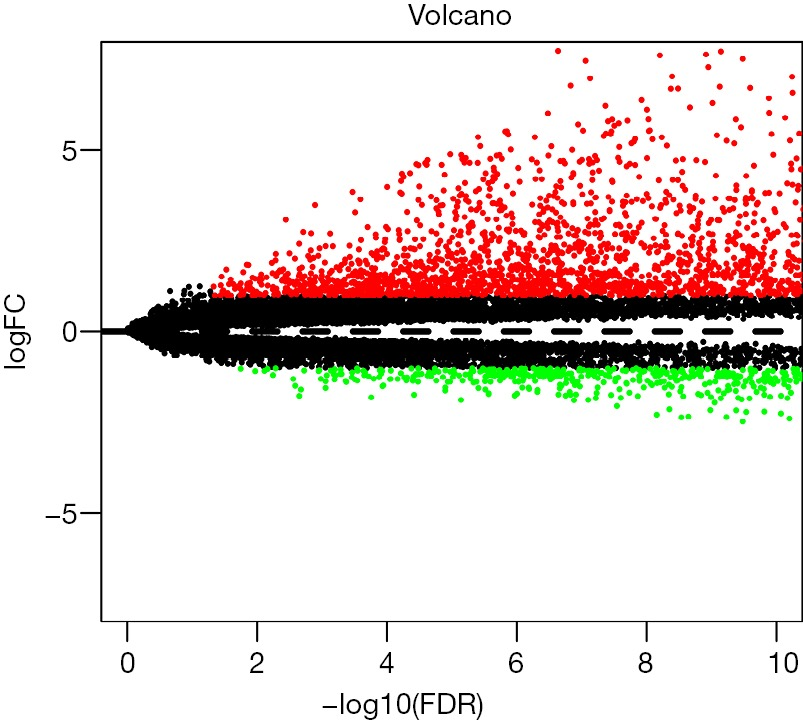 Establishment of the lncRNA risk model 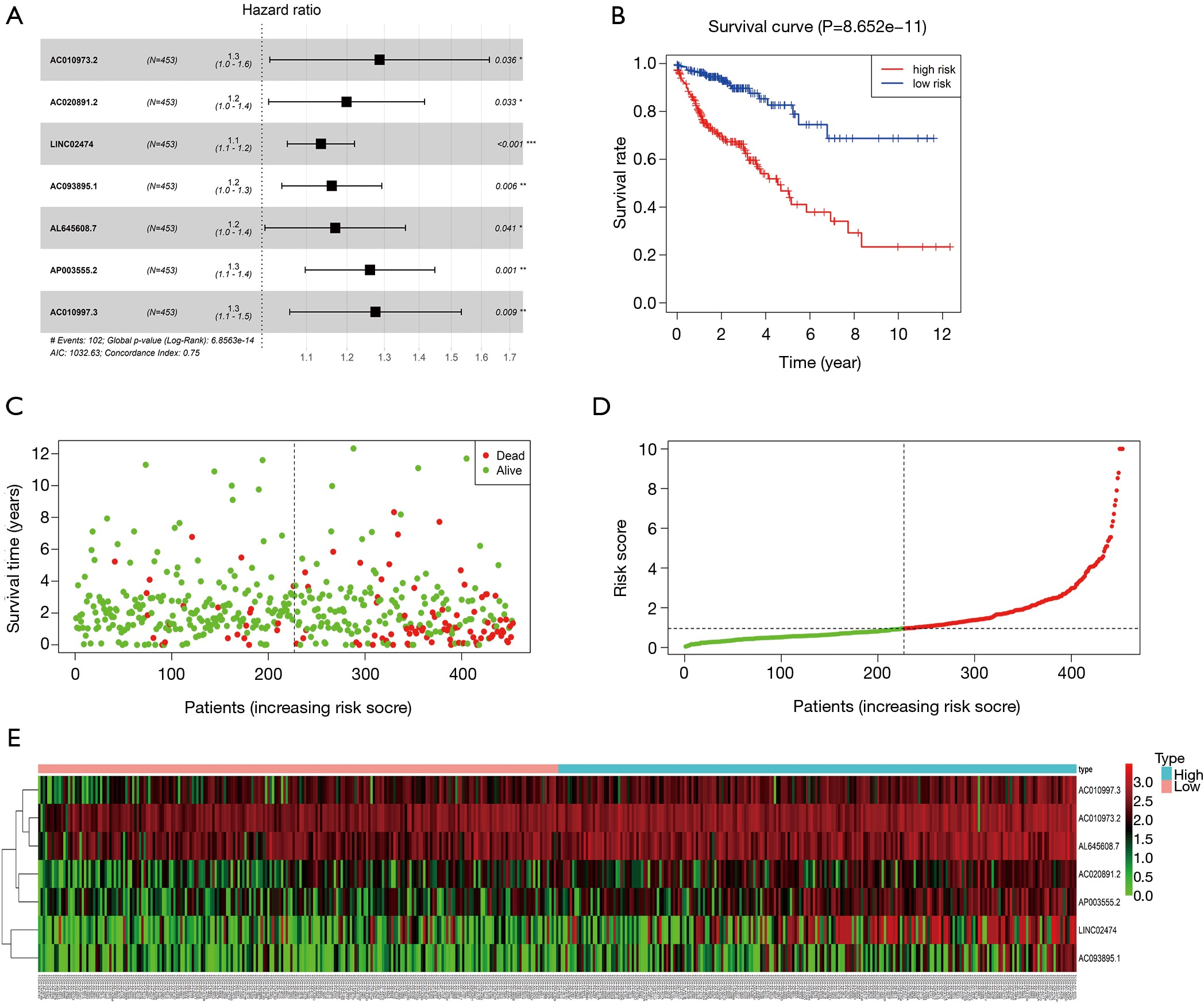 Assessment of the Cox model

By analyzing the 5-year survival data, we obtained the ROC curve, with an AUC =0.758, indicating that the Cox model has good accuracy. A C-index =0.753 further supports the accurate prediction of the Cox model (Figure 3 and Table 1). 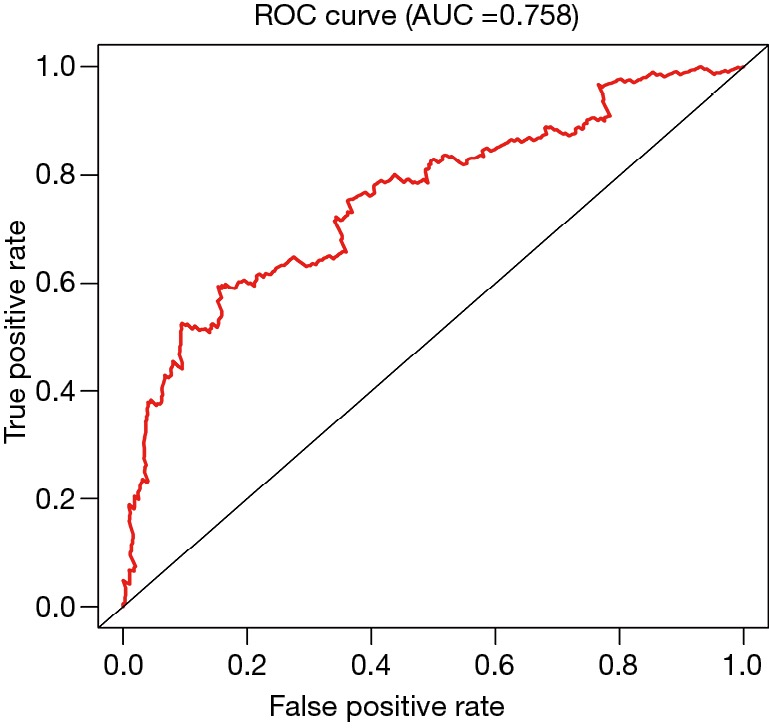 The PCGs related to the lncRNAs 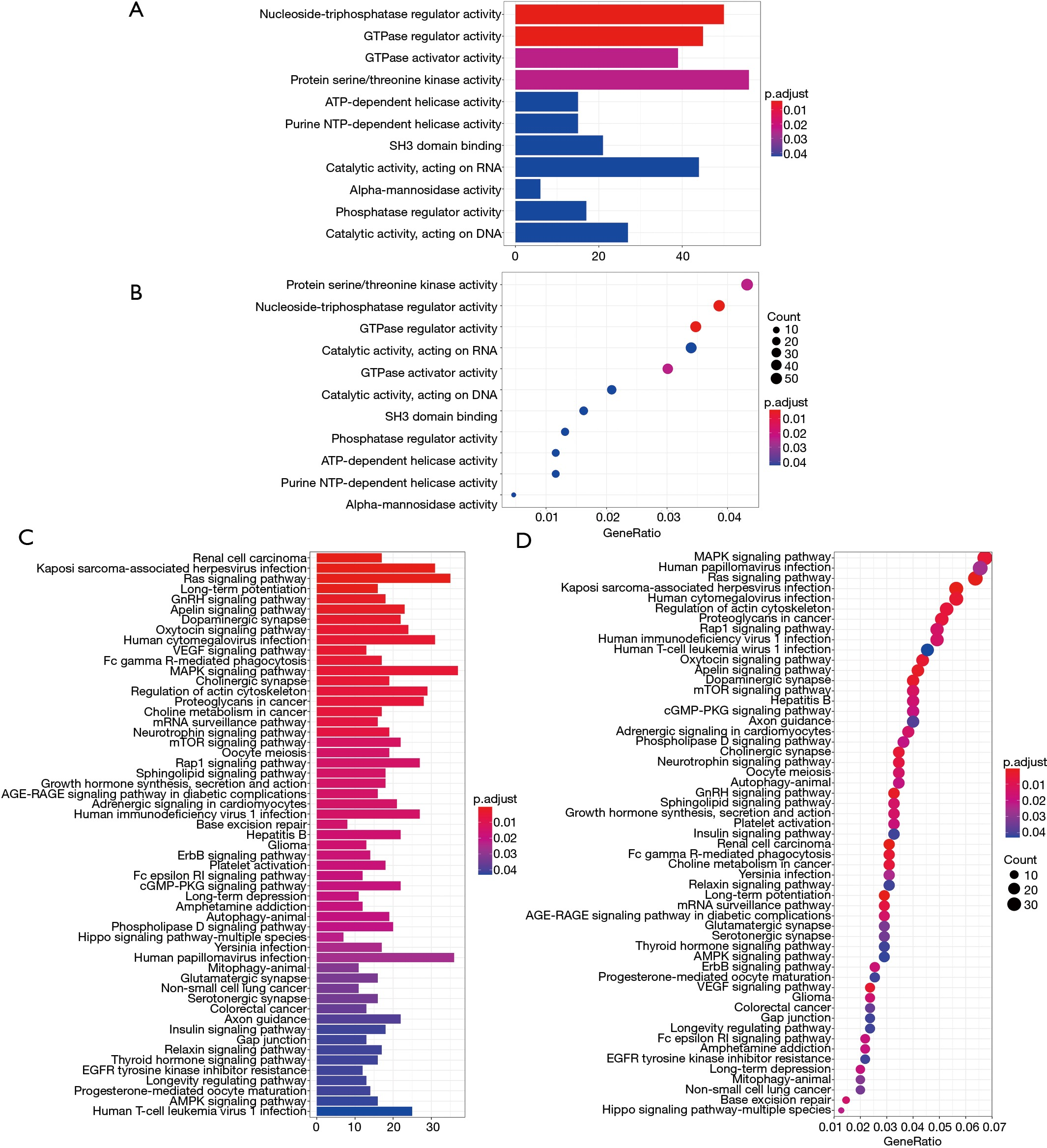 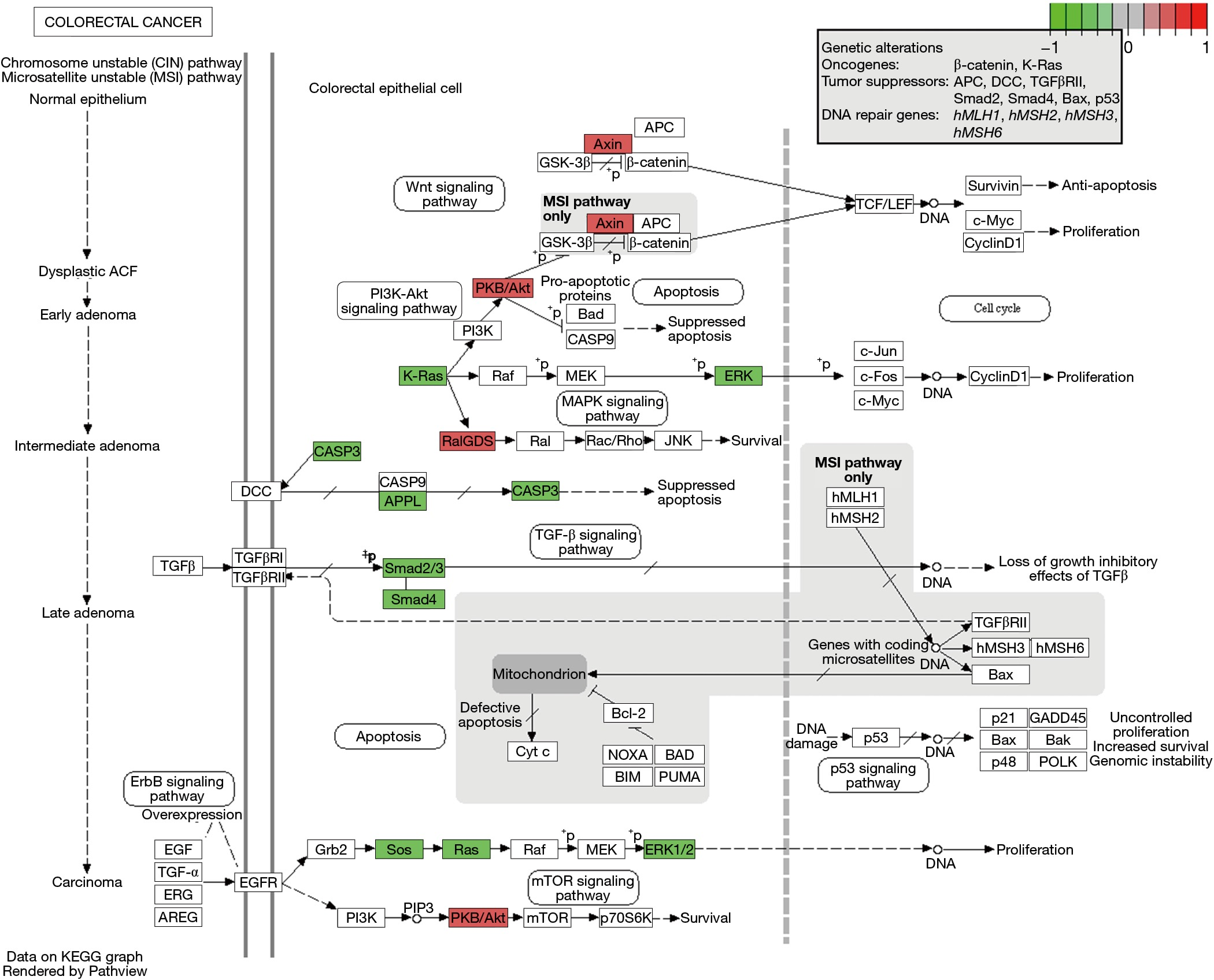 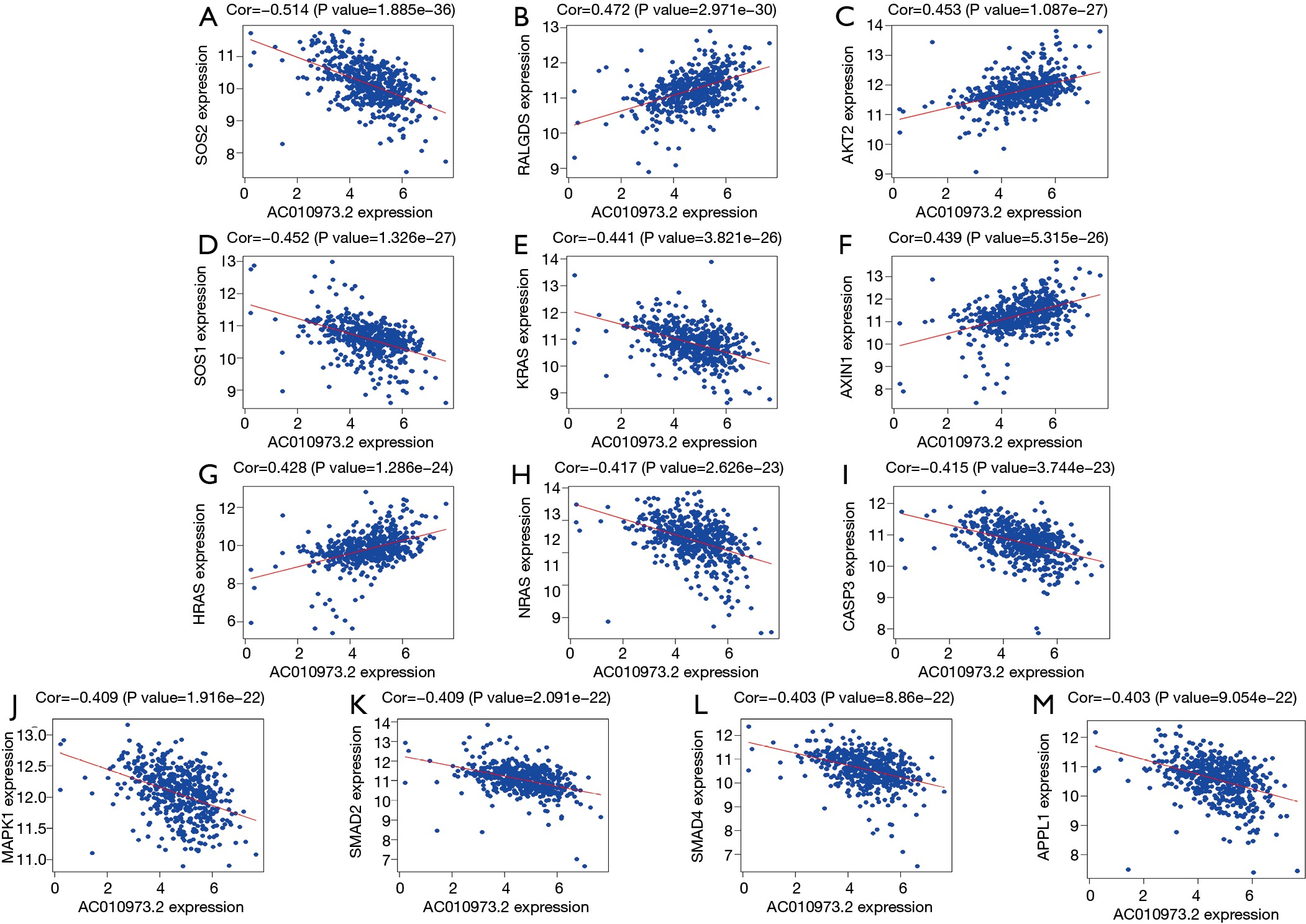 To further evaluate the 13 CRC pathways associated with the AC010973.2-related PCGs, we performed expression and survival analyses through the GEPIA database, and the results are shown in Figures 7,8. NRAS and CASP3 were markedly upregulated in COAD/READ tissues when compared with normal tissues. Patients whose samples showed high expression of MAPK1 had a higher survival rate than those whose samples had low expression levels, suggesting a batter prognostic value for COAD/READ. 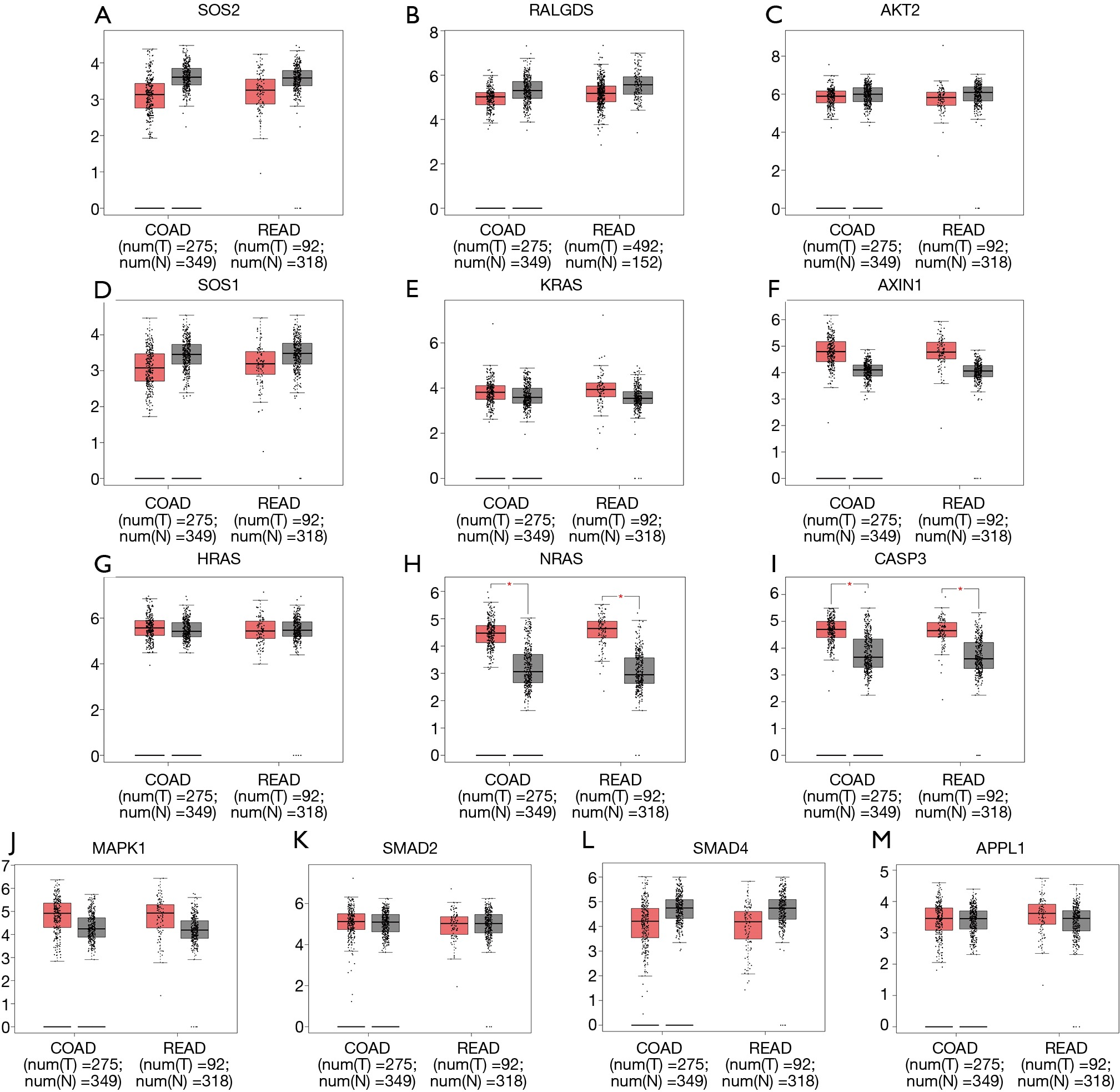 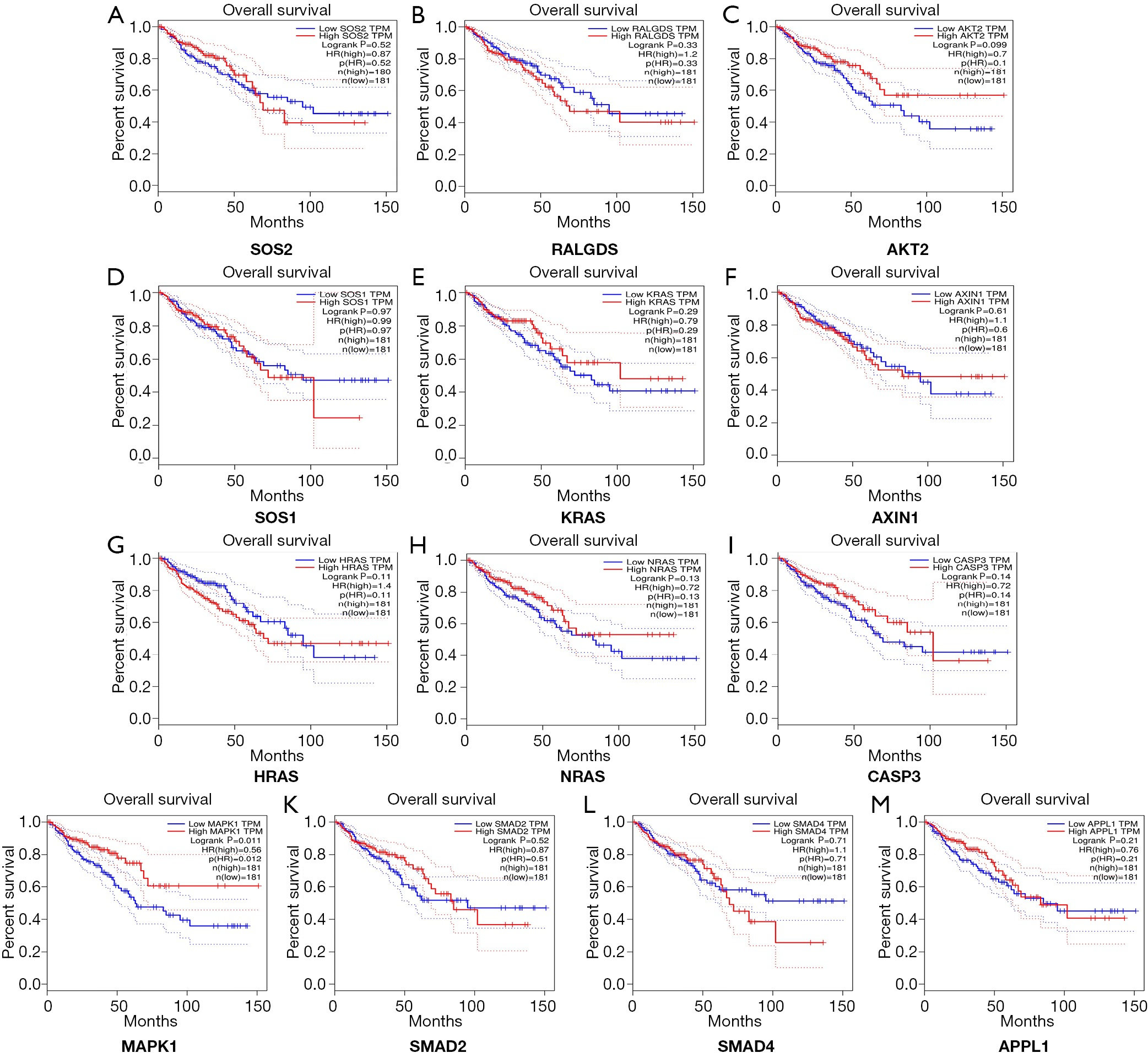 Effective management of COAD depends on early diagnosis and proper monitoring of response to therapy. However, these goals are difficult to achieve because of the lack of sensitive and specific biomarkers for early detection and disease monitoring (23). By mining TCGA COAD expression data, using differential, and univariate and multivariate Cox analyses, we constructed a COAD-Cox model. In this model, seven lncRNAs are positively associated with the risk level in COAD. After the model was successfully constructed, we used AUC of ROC analysis and C-index to evaluate the accuracy of the model. Both AUC (0.758) and C-index (0.753) were greater than 0.7, indicating that our model is accurate and can be used to evaluate the patients’ risk.

Through expression and survival analyses of 13 lncRNA-related PCGs, we found that the AC010973.2 negatively-related PCGs NRAS and CASP3 have higher expression in COAD/READ patients, while the high expression level of the AC010973.2 positively-related PCG MAPK1 correlated with a high survival rate of COAD/READ patients. This implies that AC010973.2 plays a protective role against the progression of COAD/READ. This is, however, contrary to what the multivariate Cox model suggests. Based on the model, AC010973.2 is a high-risk factor. We suspect that such a situation occurs because AC010973.2 does not directly interact with these genes, but functions through other genes or pathways.

MiRNAs are small non-coding RNAs that function as guide molecules in RNA silencing (32). MiRNAs are involved in nearly all developmental and pathological processes in animals by targeting most protein-coding transcripts (33,34). Misregulation of miRNA expression can cause many diseases, including cancer (35). The competing endogenous RNA (ceRNA) hypothesis links lncRNA and miRNA into a large-scale regulatory network across the transcriptome. This network greatly expands the functional genetic information in the human genome and plays an important role in pathological conditions such as cancer (36). A number of studies have shown that lncRNA acts as a miRNA sponge. Through this action, lncRNA affects the occurrence of cancer by affecting the binding of miRNA to target genes (36-38). We predict that lncRNA AC010973.2 might be acting as a sponge for some miRNAs and, by doing so, affects the occurrence of COAD.

AC010973.2 is an antisense lncRNA. Its specific genomic location is chr7: 151074742–151076530, it is 1,230 bp long (39), and about half of it is located in the cytoplasm (40). SLC4A2 is the homologous host gene of AC010973.2. It was shown that disruption of SLC4A2 is related to the occurrence of COAD (41). AC010973.2 might be affecting the occurrence of COAD by regulating the expression of SLC4A2. A literature search produced no reports on the function of AC010973.2. We can, therefore, state that through bioinformatics, we have found a new lncRNA that is significantly related to COAD survival. This finding provides new directions for the diagnosis and treatment of COAD.

Although we found data on a large number of COAD samples through TCGA and conducted detailed bioinformatics analysis on them, the current work is still insufficient. All our conclusions are based on computational analyses, without any verification tests in vivo or in vitro. Therefore, studying the function of AC010973.2 in in vivo and in vitro experiments will be an important part of our future work.

In conclusion, using a multivariate Cox analysis model, we identified lncRNA AC010973.2, whose expression profile is significantly related to the survival of COAD patients. Our results suggest that AC010973.2 might be a useful biomarker for prognosis, leading to an increasingly personalized therapeutic approach. The unknown function of AC010973.2, and the homologous host gene that is significantly related to COAD, open the way to a new direction for further research on the occurrence and prognosis of COAD.

Reporting Checklist: The authors have completed the TRIPOD reporting checklist. Available at http://dx.doi.org/10.21037/tcr-20-2011

Conflicts of Interest: All authors have completed the ICMJE uniform disclosure form (available at http://dx.doi.org/10.21037/tcr-20-2011). The authors have no conflicts of interest to declare.