Gastric cancer is now the fourth most common cancer worldwide, and it is the second most common cause of death from cancer. Almost two-thirds of the cases occur in developing countries and 42% in China alone (1,2). Several pathological studies had demonstrated that tumor location, tumor size, depth of invasion and histological type were independent risk factors for lymph node metastasis and cancer progression (3-5). However, these data were all derived from pathological findings after surgery, and it’s hard to estimate before surgery in this way. Factors that could be measured before surgery to evaluate the nodal status as well as tumor stage are of great help to determinate the extension of gastric surgery.

Various studies have suggested that increased dietary fat or cholesterol is correlated with increased risk for occurrence of certain cancers, such as gastrointestinal cancer, breast cancer and multiple myeloma (6-9). Previous reports have also shown the relationship between lipid profile and cancer progression. Notarnicola reported that elevated serum lipid levels might facilitate the development of distant metastasis in colorectal cancer patients (10). As for gastric cancer, the association between lipid profiles and lymph node status in gastric cancer was still controversial. Some studies reported that high levels of serum triglyceride (TG) or total cholesterol (TC) were associated with lymph node metastasis in gastric cancer (11,12). However, others showed that low level of serum high-density lipoprotein cholesterol (HDL-C) and high TC/HDL-C ratio, but not TG and TC, were independent risk factors for lymph node metastasis in gastric cancer (13). Furthermore, the relationship between serum lipid profile levels and patient prognosis in gastric cancer was rarely studied. In this retrospective study, we investigated the preoperative serum lipid profiles, including TC, TG, HDL-C, LDL-C, VLDL and apoA and their correlations with cancer progression as well as patient’s survival in 358 patients with gastric cancer, and tried to demonstrate the significance of lipid profiles in patient with gastric cancer. We present the following article in accordance with the STROBE reporting checklist (available at http://dx.doi.org/10.21037/tcr-20-1220).

A total of 368 patients diagnosed as gastric cancer pathologically admitted for surgery at the department of surgical oncology, Sir Run Run Shaw hospital, Zhejiang University College of Medicine, between May 2001 and June 2009, were reviewed. Among them, 10 patients without lipid profile records were excluded. Finally, 358 patients were retrospectively enrolled in this study.

All statistical calculations were carried out using SPSS 22.0 for Windows (Chicago, IL, USA). Receiver operating curve (ROC) analysis was performed to determine the optimal cutoff values for the lipid profile. Chi-square test was used for analyzing the relationship between the lipid profile and clinic-pathological parameters. Risk factors influencing the clinicopathological variables were determined by means of logistic regression analysis. Kaplan-Meier method was used to calculate the survival probabilities and log rank test was used to compare survival curves. Independent factors influencing the survival were determined by multivariate analysis using cox regression model. A P value of less than 0.05 was considered statistically significant.

The study was conducted in accordance with the Declaration of Helsinki (as revised in 2013). This study was approved by the ethics committee of Sir Run Run Shaw hospital (No. 20110226-90). Informed consent was obtained from all individual participants included in the study. The authors have no ethical conflicts to disclose. 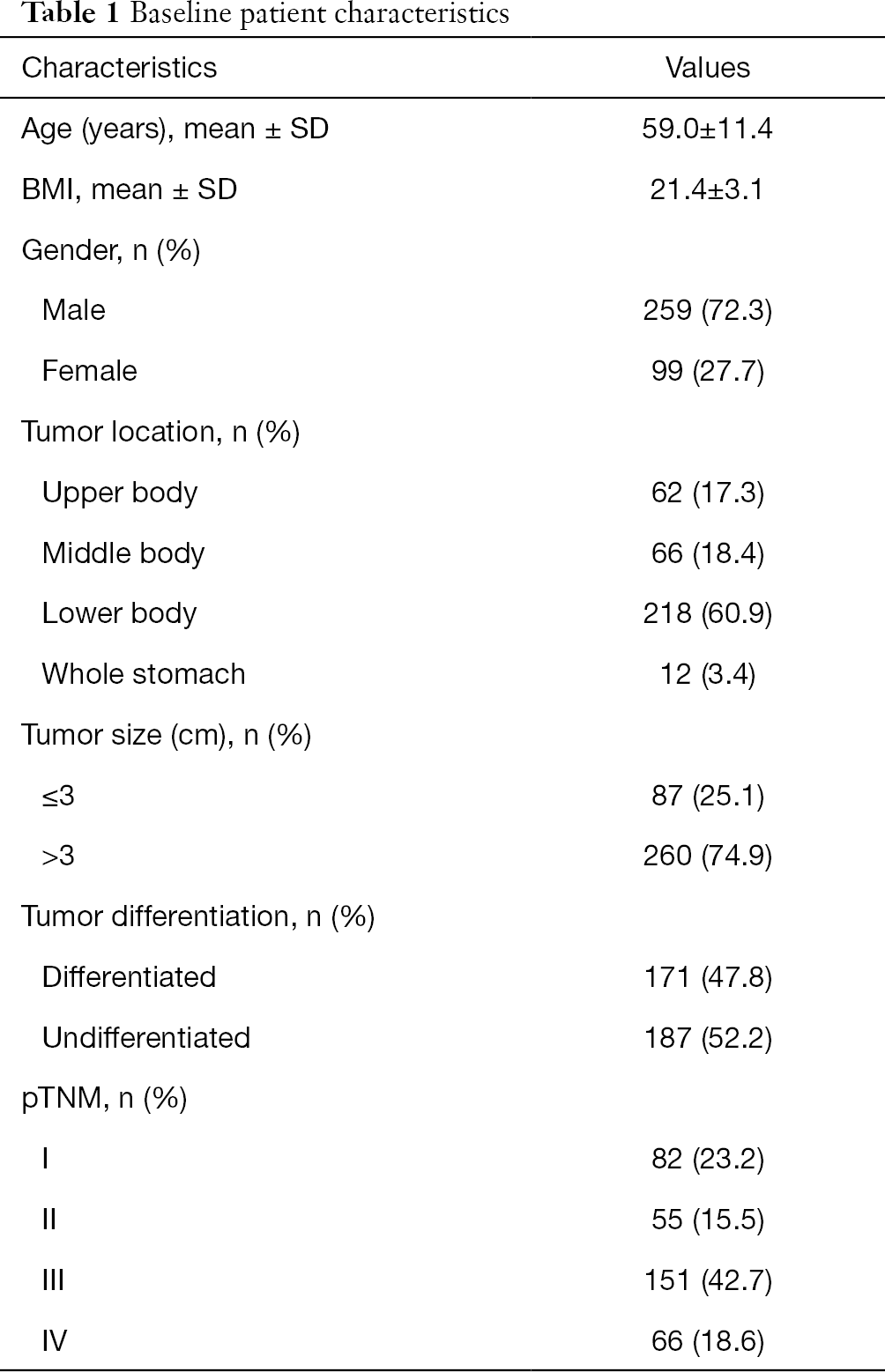 We then analyzed the correlation between the cut-off values of lipid profile and the patient’s clinical feature. Only the HDL-C, but not the TG, TC, HDL-C, LDL-C, VLDL and apoA, was associated with tumor invasion, lymph node metastasis and TNM stage, respectively (Table 2). Patients with HDL-C level less than 54.2 mg/dL showed deeper cancer invasion, more lymph node metastasis and aggressive stage as compared with those with HDL-C more than 54.2 mg/dL (Figure 1). Multivariate analysis using logistic regression model revealed that low level of serum HDL-C (<54.20 mg/dL) was one of the independent risk factors for serosal invasion (RR 1.808, P=0.037), lymph node metastasis (RR 2.481, P=0.002) and late stage (RR 2.544, P=0.010), respectively (Table 3). 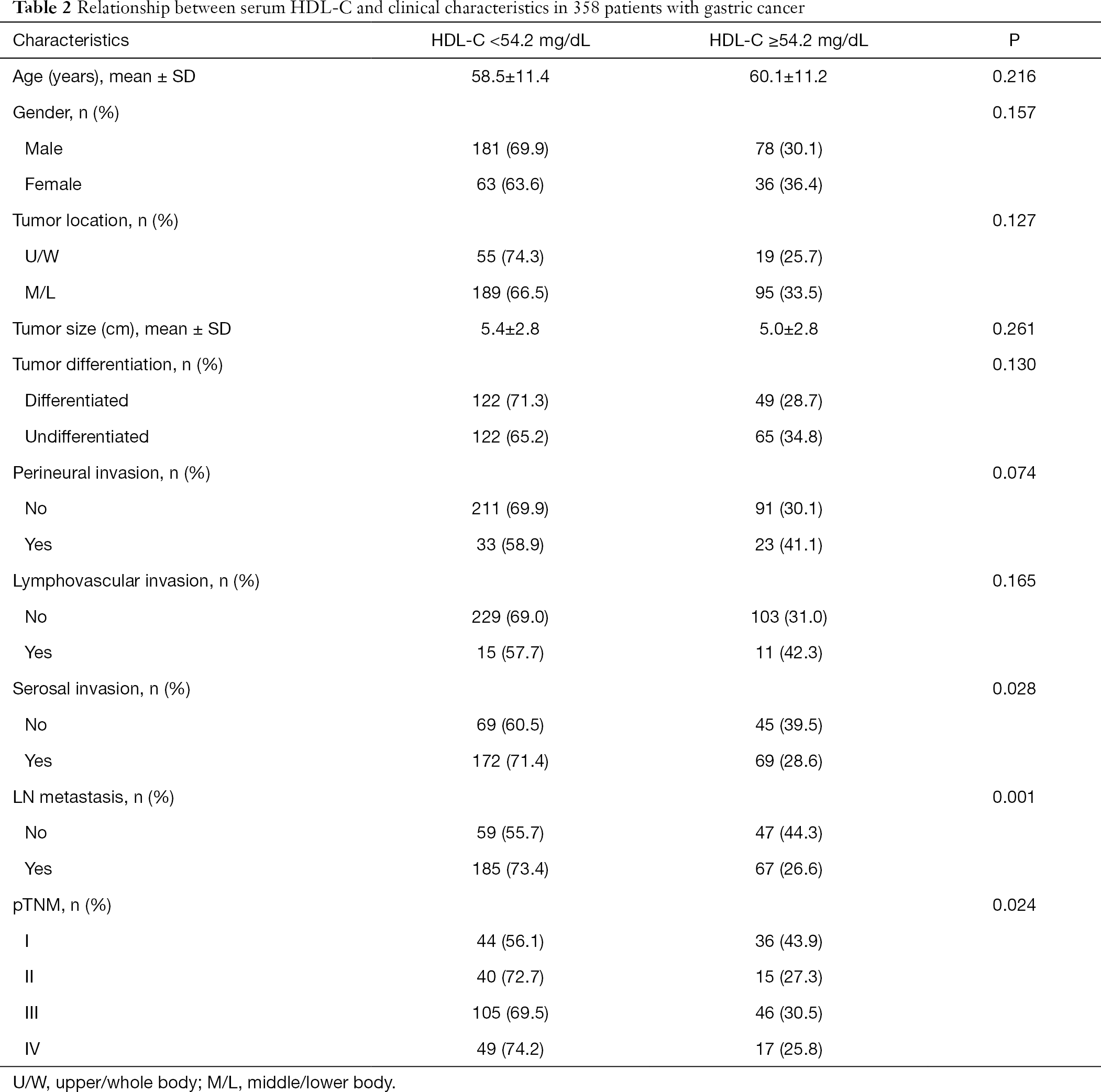 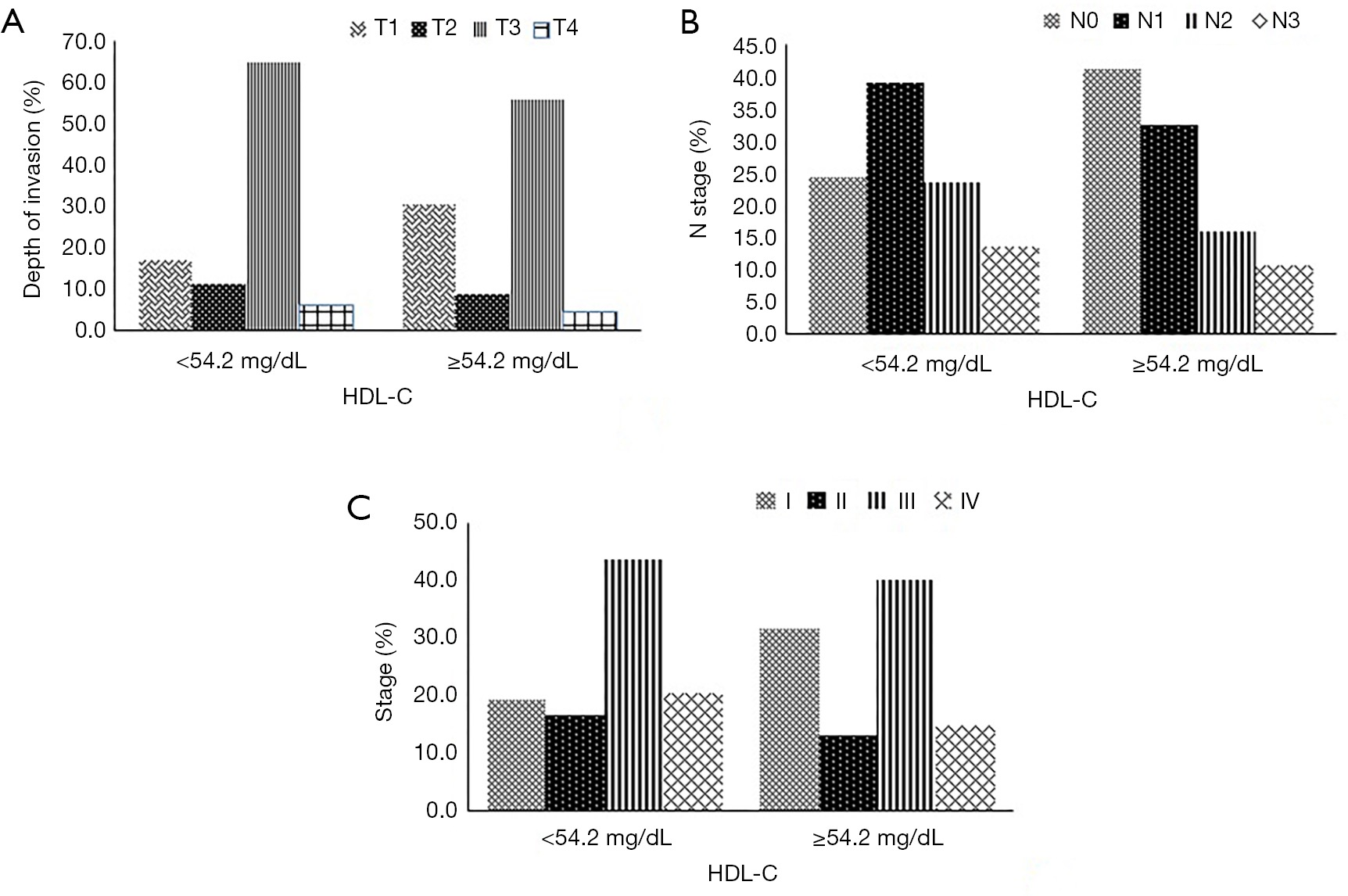 Figure 1 Distribution of depth of invasion (A), nodal involvement (B) and TNM stage (C) according to HDL-C values for 358 gastric cancers. Number of patients is given in parentheses.

Univariate analysis was used to find out the prognostic factors in all candidate variables including clincopathological parameters and the aforementioned lipid profiles. Age, tumor size, tumor location, histological type, TNM stage were significantly associated with the patient survival. The mean survival time was 55.8 and 58.9 months in patients with high and low level of HDL-C, respectively, the difference was not statistically significant (P=0.810). Although we found a significant association of lipid profile including TG and VLDL with patient survival, multivariate analysis using Cox regression model showed that none of the lipid profiles we evaluated was an independent prognostic factor predicting the survival of gastric cancer (Table 4).

Our study showed that the serum HDL-C level was associated with cancer progression in gastric cancer. However, the lipid profiles we evaluated in this study was not shown to be one of the independent factors for survival.

The biological role of HDL-C is less well understood than that of other lipoproteins. Previous studies have described a substantial decrease of serum HDL-C in gastrointestinal cancer patients, when compared with normal controls. Guo et al. also reported that low level of serum HDL-C was closely related to increased frequency of lymph node metastasis in gastric cancer (13). In his study, the cut-off level of HDL-C was 40 mg/dL, which was referenced by the risk assessment criteria for chronic heart disease (15). Using receiver operating characteristic analysis to get the best sensitivity and specificity in the prediction of lymph node metastasis in gastric cancer, our results showed that, when divided by the cut-off level of HDL-C at 54.2 mg/dL, patients with HDL-C level less than the cut-off value showed deeper cancer invasion, higher frequency of lymph node metastasis and later stage as compared with patients who had HDL-C level above 54.2 mg/dL. These results were in consistence with previous studies, and may imply that serum HDL-C level may take a share in tumor progression. Although the exact reason is not clear, several researchers have provided evidence in support of this finding.

The major function of HDL-C is to remove excess cholesterol from peripheral cells, and to deliver them to the liver and steroidogenic cells for catabolism (16). As a result, a higher level of HDL-C leads to a lower level of cholesterol in peripheral cells and a lower one leads to a higher one. Cholesterol is an indispensable ingredient for cell membrane. Many experimental studies have observed a positive association of tumor cell proliferation with cholesterol synthesis. Based on these data, we may infer that a lower level of cholesterol in peripheral cells, which may be caused by a higher level of HDL-C, restrain tumor development and lymphatic spread. On the other hand, studies showed that HDL-C level could be significantly influenced by interleukin-1 and interleukin-6 expression (17,18). Increased expression of interleukin-1 and interleukin-6 might promote cancer progression in gastric cancer (19,20). Based on this finding, we may infer that gastric cancer progression may increase the expression of interleukin-1 and interleukin-6, thus decreasing the serum level of HDL-C. However, further studies are warranted to confirm this hypothesis.

In recent years, there has been increasing evidence that lipid profile correlates with the clinical outcome in patients with some cancers. Que et al. reported that decreased pre-operative serum HDL-C was associated with decreased DFS and OS in patients with soft tumor sarcoma following radical surgery (21). In prostate cancer, high HDL-C is regarded as a prognostic factor indicating a poor clinical outcome (22). As for gastric cancer, a study from Ma et al. showed that ApoB/ApoA1 could act as an independent prognostic marker in gastric cancer among all lipid molecules (23). Tamura et al. found a positive correlation between low serum HDL-C levels and prognosis for gastric cancer, patients in the low-HDL-C group (HDL-C <40 mg/dL) had a significantly higher rate of gastric cancer mortality compared with the normal-HDL-C group (HDL-C ≥40 mg/dL) (24). However, Liu et al. reported that lipid markers including HDL-C, LDL-C, CHO, and TG do not present prognostic significance in gastric cancer (25). In the present study, TG and apoA were correlated with patient survival in univariate analysis. However, no lipid markers we mentioned above were found to be independent factors for prognosis in gastric cancer. The reasons for the controversial results of these studies may be explained as following: first, patients with different types of cancer might have different lipid profiles and thus the influence of lipid markers on cancer prognosis might be different. On the other hand, the factors analyzed for prognosis prediction in previous studies were variable, and this selection bias may also influence the outcome.

There were several limitations in this study. First, our results were based on a retrospective study with a relatively small number of patients. A large-scale analysis must be performed to further prove the findings. Furthermore, although some possible reasons have been used to explain the relationship between serum lipid profiles and cancer progression as well as prognosis, further experimental studies should be carried out to explore its intrinsic mechanism.

In conclusion, our study clearly indicates the potential risk marker of HDL-C level as an independent factor for cancer progression, although its role on patient prognosis is not fully identified.

Reporting Checklist: The authors present the study in accordance with the STROBE reporting checklist. Available at http://dx.doi.org/10.21037/tcr-20-1220

Ethical Statement: The authors are accountable for all aspects of the work in ensuring that questions related to the accuracy or integrity of any part of the work are appropriately investigated and resolved. The study was conducted in accordance with the Declaration of Helsinki (as revised in 2013). This study was approved by the ethics committee of Sir Run Run Shaw Hospital (No. 20110226-90). Informed consent was obtained from all individual participants included in the study. The authors have no ethical conflicts to disclose.