The prevalence of pancreatic cystic neoplasms (PCNs) is on the rise (1). Although the current AJCC (the American Joint Committee on Cancer) lymph node (N) staging guidelines take into account lymph node involvement, it does not consider the number of lymph nodes removed or the fraction of the positive nodes.

Lymph node ratio (LNR) is a measure of the number of positive regional lymph nodes (RNP) relative to the number of regional nodes examined (RNE). For pancreatic ductal adenocarcinoma (PDAC) patients with metastatic lymph nodes, LNR appears to be associated with prognosis (2-7). Moreover, in a single-center retrospective study, Partelli et al. (8) found that high LNR was associated with poor prognosis in patients with invasive intraductal papillary mucinous neoplasms (IPMN). However, the prognostic value of LNR in patients with invasive PCN remains unknown.

The aim of this study is to evaluate the relationship between LNR and the survival of patients with intraductal papillary mucinous neoplasms (IPMN), mucinous cystic neoplasms (MCN), serous cystadenomas (SCN), and solid pseudopapillary neoplasms (SPN), which are the most common types of invasive PCN (9,10).

We present the following article in accordance with the STROBE reporting checklist (available at http://dx.doi.org/10.21037/tcr-20-1355).

Patients were diagnosed with invasive IPMN, SPN, MCN, and SCN based on pancreatic location and the International Classification of Disease for Oncology, 3rd Edition (ICD-O-3) histological classification. The following data were retrieved from the SEER database: baseline demographic characteristics (age, diagnosis year, race, sex, and marital status), clinical tumor variables (tumor location, tumor size, histological types, RNE, RNP, metastasis, and grade), surgical procedures (total pancreatectomy or other) and survival time (from diagnosis to last follow‐up or the date of death). Living patients or those lost to follow-up were right-censored for the overall survival (OS) analysis. Patients whose death was not related to PCN were right-censored for the cancer-specific survival (CSS) analysis. The LNR was defined as the number of RNP divided by the number of RNE (RNP/RNE). The detailed process of data extraction is shown in Figure 1. Since only one SCN case remained based on our exclusion criteria, MCN and SCN cases were grouped together. The relationships between LNR and survival outcomes were analyzed for the entire cohort, node-negative cases, and node-positive cases. 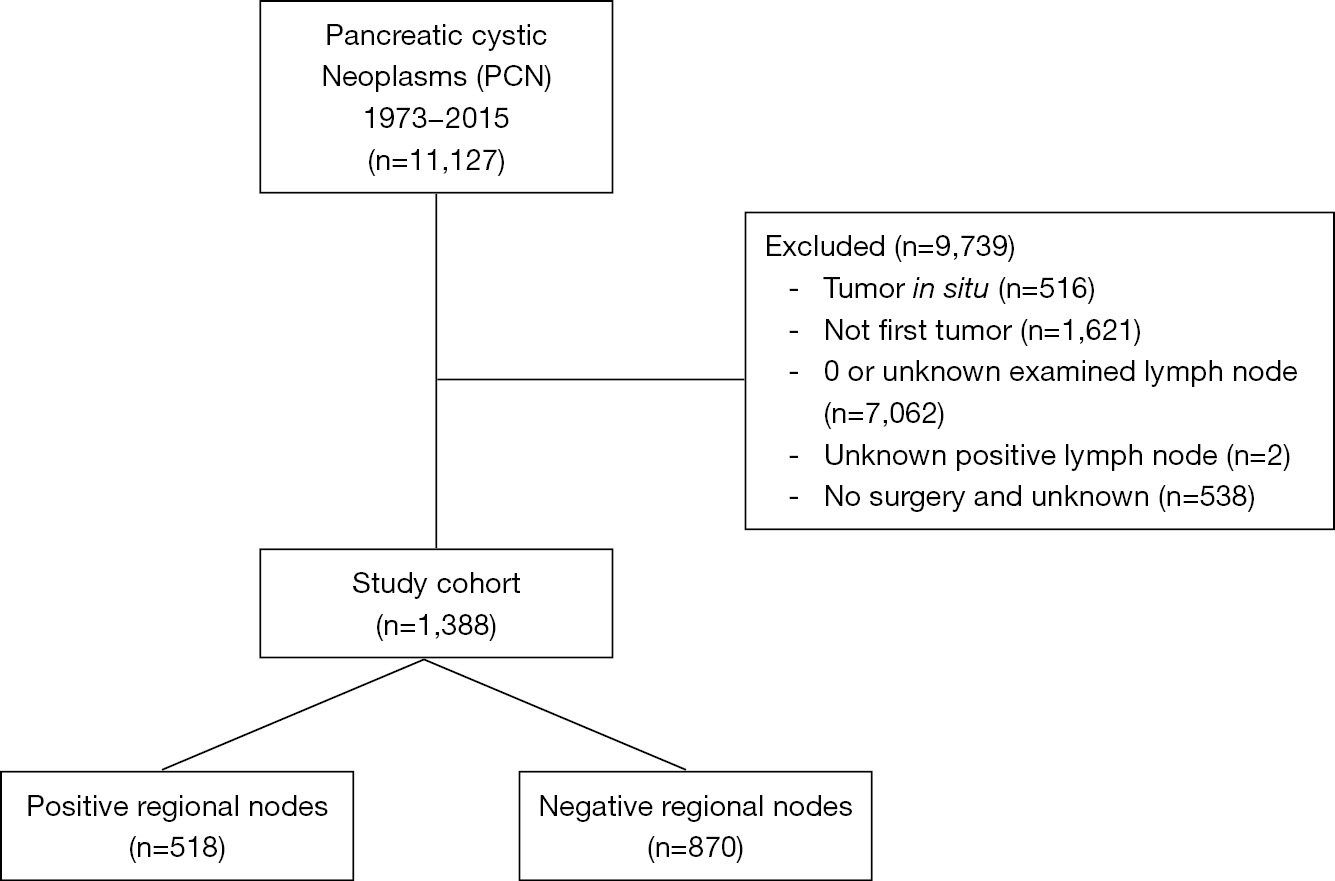 Continuous variables were reported using median with 25th and 75th percentiles. Kaplan-Meier method, log-rank test, likelihood ratio test, and Cox proportional hazard models were used in univariate and multivariate analysis as appropriate to investigate the associations between the endpoints and the risk factors. Continuous variables, such as the year of diagnosis and RNE, were divided into four equal-sized groups based on numbers of patients and the prior studies (11). Age at diagnosis was split into two groups by 65 years.

Survival analysis of patients grouped according to tumor size, defined using the pancreatic cancer AJCC T stage (8th edition), was performed using the Kaplan-Meier method (Figure S1). Regional lymph node staging was based on the AJCC N staging (8th edition) system. RNP and LNR cases were divided into three groups: patients without lymph node involvement and two equal-sized groups of patients with lymph node involvement. Cases were groups based on the LNR as follows: LNR A, no nodal involvement; LNR B, ≤20%, and LNR C, >20% (Table 1). 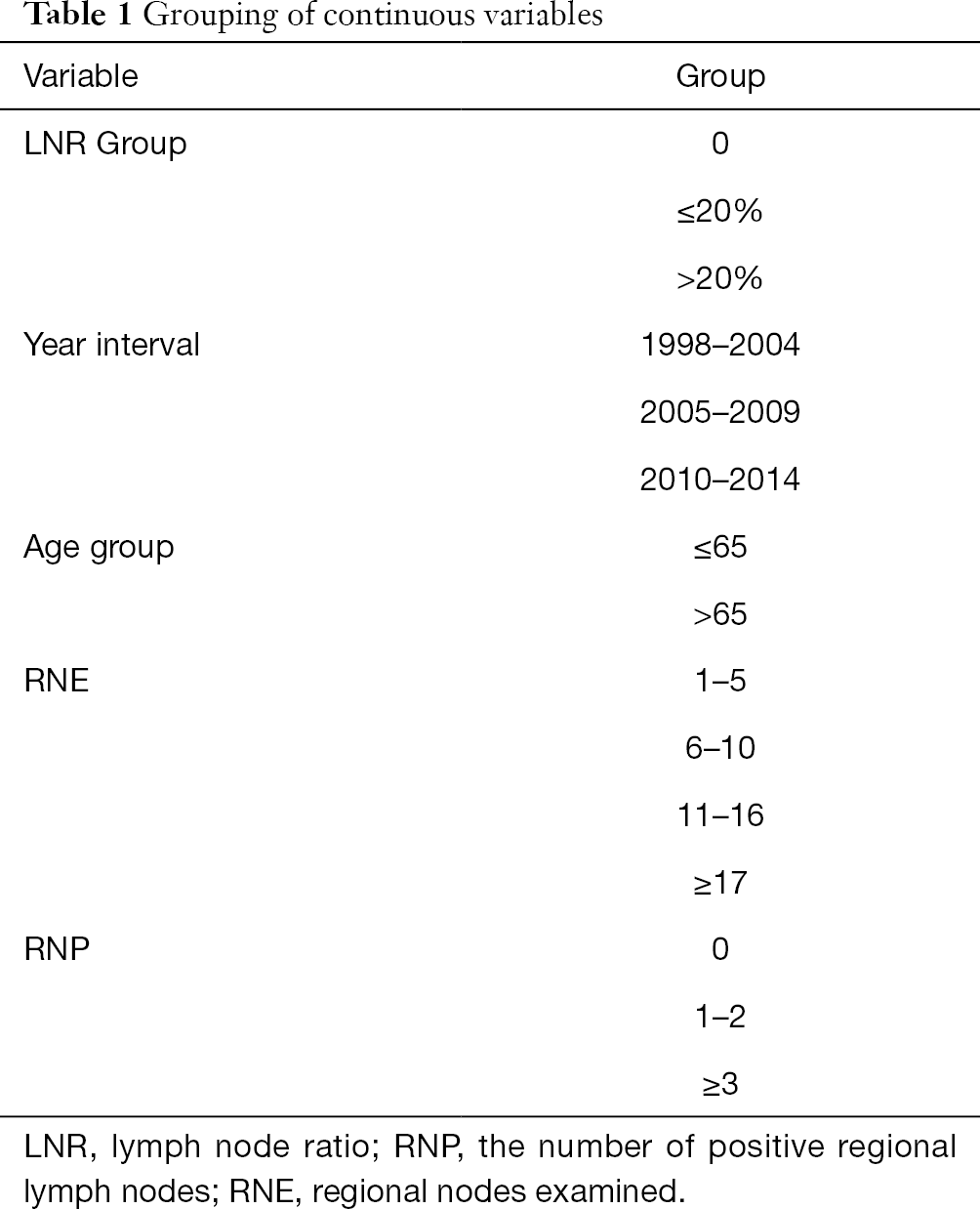 Demographic and tumor characteristics of the study population

Data from 1,246 patients who met the inclusion criteria were included in this study (Figure 1). The baseline patient characteristics and tumor features are summarized in Table 2. More than 60% of patients (n=767) had no regional lymph node involvement (N0) and 38% (n=479) had at least one positive lymph node. The median number of positive lymph nodes in LNR B and LNR C groups was one and four lymph nodes, respectively. There were no significant differences in the baseline characteristics of patients in groups LNR B and LNR C. A high LNR was associated with poor patient survival (median survival time, 13 vs. 21 months; P=0), lower RNE (median, 11 vs. 15 nodes; P=0), and a higher number of positive lymph nodes (median, 4 vs. 1 node; P=0). Since the characteristics of different invasive PCN types might vary, we also compared the patient characteristics and pathological findings, including lymph node status, for each PCN type (Table 3).

Table 3 Comparison between RNE and the LNR
Full table

The results of Kaplan-Meier survival analyses are shown in Figure 2. There were remarkable differences in the OS and CSS among the different LNR groups. However, the survival of patients with N1 and N2 stage cancer did not differ significantly, suggesting that LNR may be a better prognostic indicator than the AJCC N stage for PCN patients with regional lymph nodes involvement. High RNE was associated with longer survival time in RNP patients but not in the entire cohort (Figure 3). Furthermore, there was an inverse association between RNE and LNR (Tables 2,3). 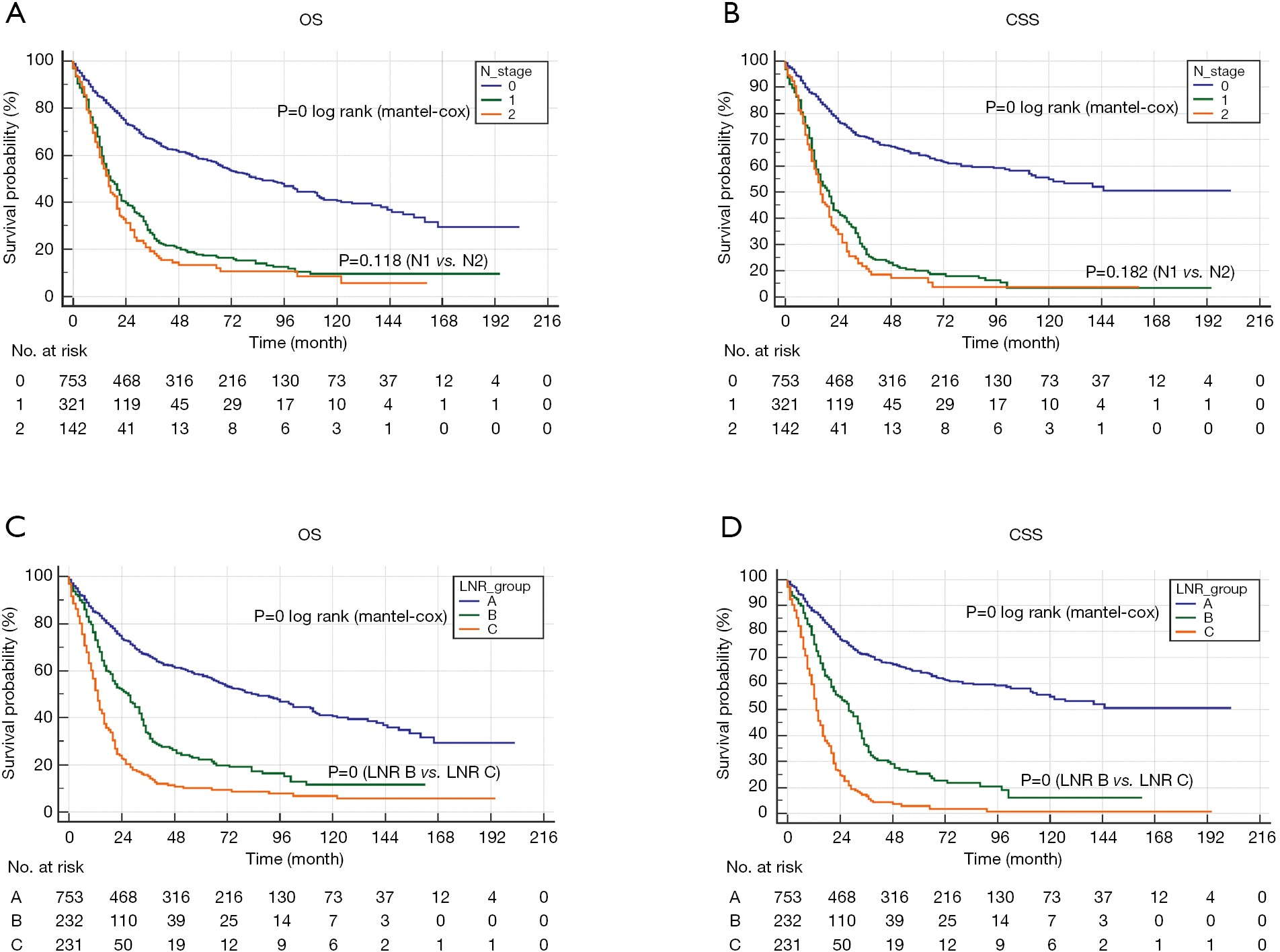 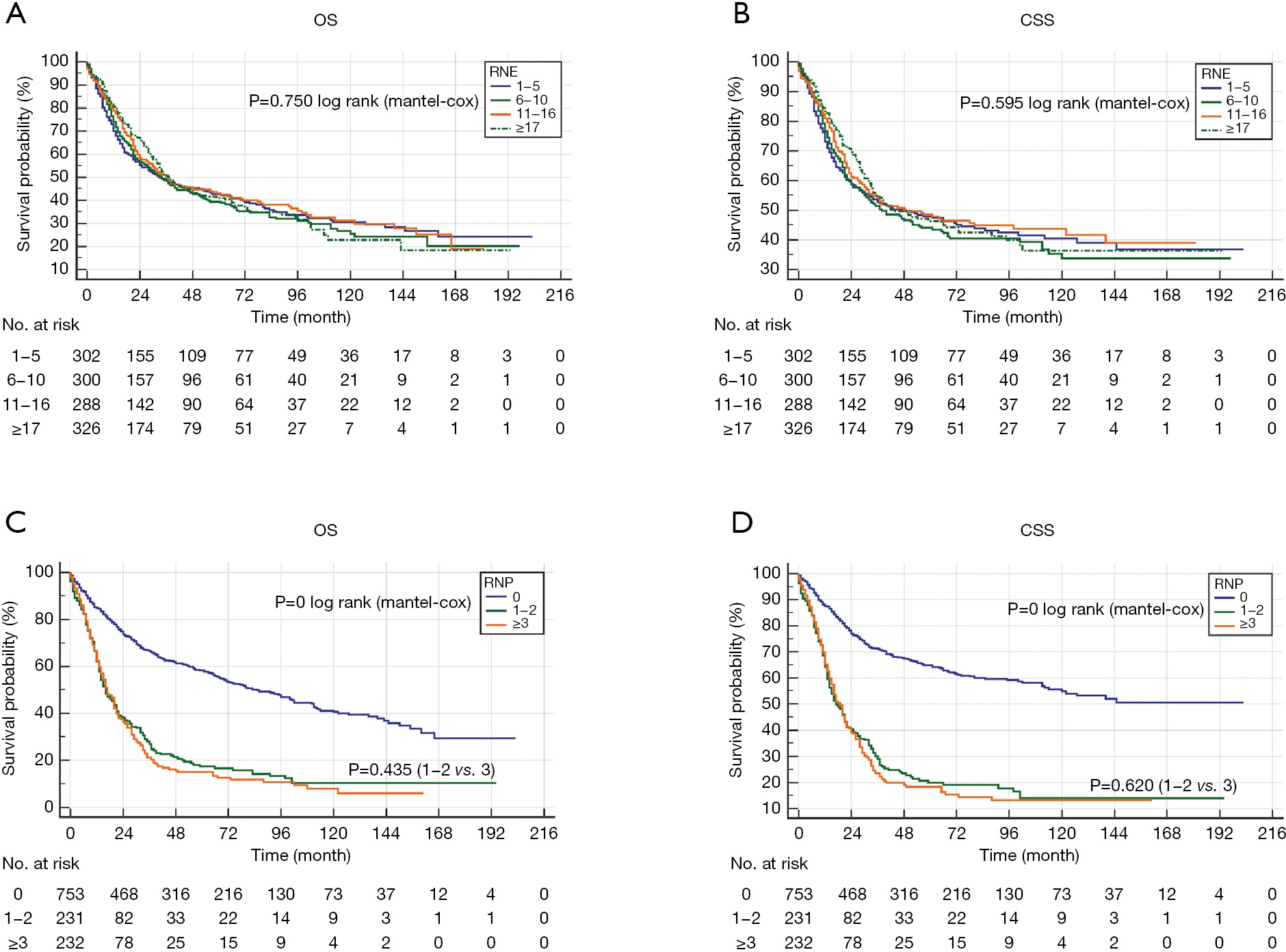 To further investigate the impact of RNE, RNP, and LNR on prognosis, we conducted univariable and multivariable analyses in the entire cohort (Table 4) and RNP patients (Table 5). The factors significantly associated with OS in univariate analysis were adjusted for multivariate analysis; we identified LNR as a significant factor associated with poor OS, both for RNP patients and the entire cohort. These findings suggest LNR as an independent prognostic factor of poor survival in PCN.

Table 4 Univariate and multivariate analysis in all patients
Full table

Although the prevalence of PCN is on the rise (12), large PCN cohort studies are limited (13), and the factors affecting invasive PCN outcomes remain unclear. In this study, we found that the AJCC N staging could not predict survival in node-positive PCN patients who underwent surgery (Figure 2). Lymph node involvement is one of the main factors predicting survival in various cancers. A large cohort study involving 15,809 PDAC patients demonstrated that combined RNP with RNE predicted survival more accurately than a single factor (3). Studies on gastrointestinal tumors have also shown that LNR is an important prognostic factor (7,14-18). For PDAC patients with N1 disease, LNR also appears to be associated with prognosis (2-6,19). Additionally, a retrospective study demonstrated that LNR was a robust prognostic predictor after invasive IPMN resection (8).

In this study, we analyzed the ability of LNR to predict survival in patients with invasive PCNs. For the entire cohort, univariate and multivariate analyses revealed that higher T stage, metastasis, high tumor grade, and LNR were associated with worse prognosis, corroborating previous findings (13). Intriguingly, RNP and RNE were not independent prognostic factors, even though the AJCC N stage and RNE were previously reported to predict patient outcomes (3,11,20).

Werner et al. (39) showed that the median survival of pancreatic cancer patients was 25 months. The OS of patients with invasive PCN reported here is considerably shorter than that reported by Werner et al. However, in this study, we analyzed data from patients diagnosed between 1988 and 2014, most of which had advanced-stage disease. With the development of novel treatments and diagnostic methods, the prognosis of patients has improved considerably. In this study, we analyzed data from patients who underwent surgery. Given that most patients with small tumors and with no clinical symptoms are treated with conservative therapies, it is likely that many such cases were excluded from our study, contributing to the short OS time. The median age of patients in our study was 64 years, which could also have contributed to the shorter OS time. Moreover, invasive carcinoma has been associated with poor outcomes (40-42). Notably, Schnelldorfer et al. (8,43) showed that invasive IPMN was as aggressive as ductal carcinoma.

There are certain limitations to our study. Firstly, this was a retrospective study, and prospective studies are warranted to confirm our findings. Secondly, angioinvasion and perineural invasion are reliable indicators of high PCN invasiveness. Unfortunately, such invasion characteristics were not available in the SEER database. Tumor-free margin status (R0) has been reported to be a strong indicator of curative resection in pancreatic cancer. Moreover, the tumor size of patients withR2 disease could have been inaccurate. These missing variables may have impacted the accuracy and reliability of our findings. Despite these limitations, our study provides a novel insight into the prognostic value of LNR in PCN patients undergoing surgery.

LNR was significantly associated with OS and CSS and was an independent prognostic predictor in patients with invasive PCN. Therefore, LNR may represent a promising prognostic factor alternative to the AJCC N stage in patients with node-positive PCN.

Reporting Checklist: The authors have completed the STROBE reporting checklist. Available at http://dx.doi.org/10.21037/tcr-20-1355

Conflicts of Interest: All authors have completed the ICMJE uniform disclosure form (available at http://dx.doi.org/10.21037/tcr-20-1355). The authors have no conflicts of interest to declare.

Ethical Statement: The authors are accountable for all aspects of the work in ensuring that questions related to the accuracy or integrity of any part of the work are appropriately investigated and resolved. All data comes from a public database, which removes all patient tags; no ethical approval is required. The study was conducted in accordance with the Declaration of Helsinki (as revised in 2013). Data for this study were obtained from the US NCI SEER database (https://seer.cancer.gov).