Gallbladder carcinoma (GBC) is the most common cancer of the bile duct, which accounts for 1.2% of all global cancer diagnoses and 1.7% of all cancer deaths (1,2). This carcinoma is infrequent in developed countries but more common in some developing countries. The incidence of GBC in female patients was significantly higher than that in male (3,4). Compared with other malignant bile duct tumors, GBC has a poorer prognosis, as the 5-year survival rate for patients with the disease was between 5% and 13% with a median survival of only about 6 months (5). Despite advances in the modalities used for GBC diagnosis and treatment, the clinical outcomes of GBC have not significantly improved because there are no specific symptoms in patients with early-stage carcinoma of the gallbladder and its diagnosis is often delayed (6,7). A surgical resection is currently the only effective treatment for GBC, but aggressive surgical approaches may result in high surgical morbidity and mortality rates (8,9). Therefore, studies aiming to elucidate the molecular mechanisms mediating GBC initiation and progression, improve the methods of early diagnosis, are urgently needed.

Long non-coding RNAs (lncRNAs) is a kind of extensive transcription with RNA transcripts longer than 200 nucleotides (nt) that lack of coding protein function(10). It has been proved that lncRNAs may involve in various physiological and pathological processes such as cell proliferation metastasis and carcinogenesis by regulating transcription, translation as well as post-transcriptional and post-translational processing (11,12).

Long intergenic non-protein coding RNA 261 (Linc00261) is a lncRNA, shown to play key roles in the tumor suppression (13-15). It has been revealed that level of Linc00261expression was significantly lower in choriocarcinoma tissues and cell lines (14). Linc00261 overexpression in choriocarcinoma or hepatocellular carcinoma cell lines would decrease cell proliferation and inhibit cell invasion in vitro (14,16). However, the expressional level and functional role of Linc00261 in GBC has remained largely unknown. We hypothesized that Linc00261, as an inhibitor of human tumorigenesis, may also play important role in GBC development and progression.

This research aimed to investigate the function of Linc00261 associated with GBC development, which may enable clinicians and researchers to identify GBC-specific diagnostic biomarkers and to develop therapies capable of preventing cancer invasion and metastases.

This study was approved by the ethical committee of the First People’s Hospital in Yunnan Province. A total of 100 patients diagnosed with GBC in Hepatopancreatobiliary Surgery Department of the First People’s Hospital in Yunnan Province were admitted to this study. Tumor tissues from 100 patients and their adjacent normal tissues (3 cm apart to the focus) were collected in sterile tube and stored in liquid nitrogen immediately. Serum Linc00261 levels in 50 GBC patients and 30 healthy individuals were measured and compared. 20 GBC patients’ blood samples were collected 1 week after surgery. Blood sample (2 mL) was placed in a vacutainer tube containing anticoagulant for isolation of serum. Supernatant was collected after centrifugation of blood. All simples were stored in liquid nitrogen. The study was conducted in accordance with the Declaration of Helsinki (as revised in 2013). The study was approved by the First People’s Hospital of Yunnan Province (approval number: KY-E-2017-1-20). All patients showed their full intention to participate in this study, and written consent from each patient was collected.

Total RNA was extracted from human tissues, cultured cell lines and serum by TRIzol reagent (TaKaRa, China) with a concentration of 1 ml for each well in six-well plates. Cell lines and serum have been centrifuged and removed supernatant before extraction. cDNA was reversely transcribed by Transcriptor First Strand cDNA Synthesis Kit (TaKaRa). RT-PCR was then performed using a Power SYBR Green PCR Master Mix (Applied Biosystems, Life Technologies) and Bio-Rad CFX96 real-time PCR System. Gapdh was included as an internal control. The primers of Linc00261 and Gapdh in previous report (17) were used.

All statistical data were analyzed by SPSS 19.0 version software. The relationship between the expressions of Linc00261 in GBC with the clinicopathological features of the patients was estimated by the chi-square test. The differences in overall survival (OS) curves and the progress free survival (PFS) rate were compared using the Kaplan-Meier, and the independent prognostic factors of the patients (including gender, age, tumor size, TNM stage, differentiation, Lymph node metastasis) were analyzed by Cox model. The diagnosis efficacy of using the serum Linc00261 level to identify the GBC has been investigated by ROC curve analysis. A P value <0.05 (bilateral test) was considered statistically significant in all the examinations. Statistically significant values for <0.05, <0.01, and <0.001 are indicated by single (*), double (**) and triple (***) asterisk, respectively.

Linc00261 is significantly down-regulated in GBC tissues and cell lines

To elucidate the potential function of Linc00261 in GBC, we analyzed the relationship between the Linc00261 expression level and the clinicopathological factors of the GBC patients. As shown in Table 1, the findings revealed that the lower level of Linc00261 expression was correlated with large tumor size (P<0.0001), late TNM stage (P=0.008), negative liver metastasis (P=0.027) and high differentiated degree (P=0.017). But gender and age of patients has no significant association with Linc00261 expression (P>0.05, respectively). 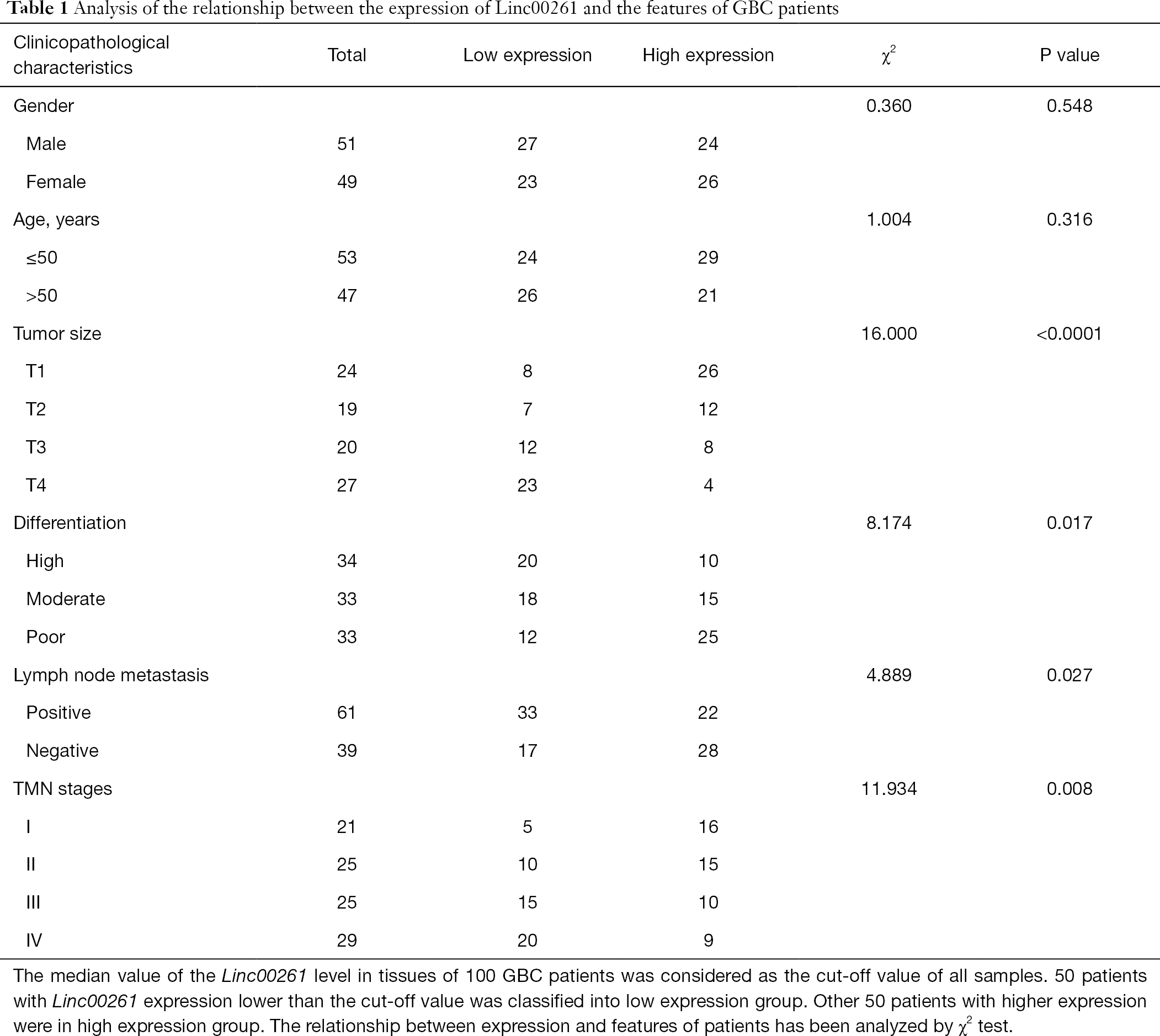 We have indicated that the expression of Linc00261 has correlation with the clinicopathological features of GBC. To further determine the prognostic effect of Linc00261 expression in GBC patients, we conducted a Kaplan-Meier survival analysis as shown in Figure 2. For the patients with low Linc00261 expression, Kaplan-Meier analysis revealed that they had significantly worse outcomes in terms of overall survival (OS, P=0.0188) and progression-free survival (PFS, P=0.0029) (Figure 2A,B). 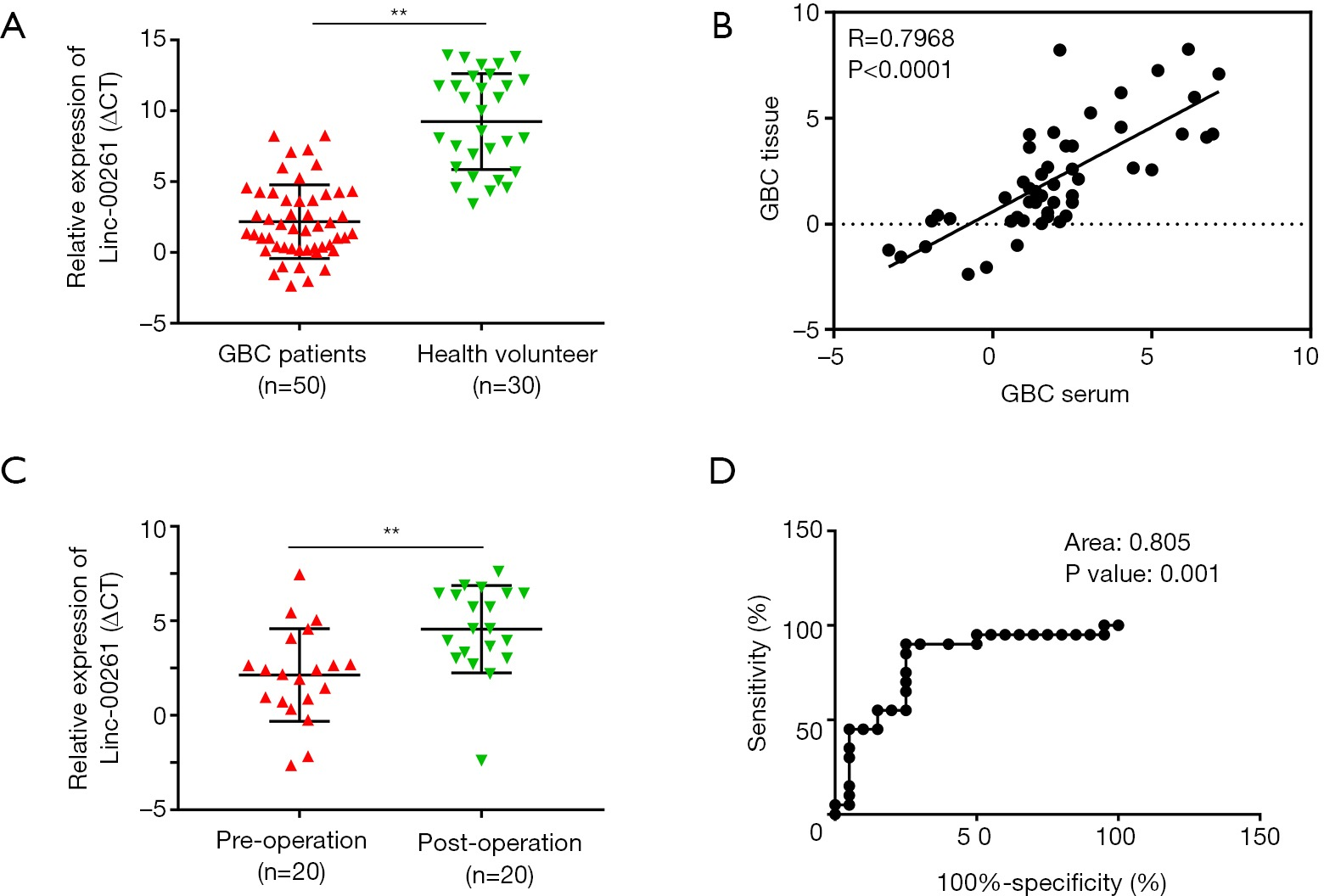 GBC is the most common and aggressive malignancy of the bile duct, and the worldwide incidence of the disease is increasing annually (18). Despite the recent advances in the management of GBC, the prognosis of patients with GBC remains relatively poor (19,20). The overall 5-year survival rate of GBC is less than 5%. But in early-stage disease, the 5-year survival rate reaching 75% can be achieved if stage-adjusted therapy is performed. Additionally, only a third of GBCs are preoperatively recognized. GBC is diagnosed by pathologists after routine cholecystectomy for a benign disease, which was termed ‘‘incidental or occult gallbladder carcinoma (IGBC)” (7). Therefore, it is significant that to find novel genes associated with GBC development and progression and to make them as new biomarkers for early diagnosis.

Previous studies have shown that Linc00261 has lower expression in various kinds of cancer cell such as choriocarcinoma, gastric cancer, colon cancer and esophageal cancer cells (21,22) compared with normal cells. Linc00261 has been recognized as a tumor-suppressor gene. There was report that Linc00261 can restrain β-catenin from cytoplasm into nuclei to down-regulate nuclear β-catenin, which could promote β-catenin degradation and inhibit activation of WNT pathway in human colon cancer cells (23). In gastric cancer cell lines, Linc00261 could decrease the stability of Slug proteins and suppressing epithelial-mesenchymal transition (EMT) (21). Moreover, during lung cancer tumorigenesis and progression, Linc00261 can suppress EMT correlated with its neighboring gene forkhead box A2 (FOXA2) (24). In our research, we found out that the expression of Linc00261 was decreased in GBC tissues compared with para-carcinoma tissues just like reported researches mentioned above. And the expression level of Linc00261 negatively correlated with advanced tumor status, clinical stage and poor prognostic outcome.

Many researches also identify Linc00261 as a prognostic biomarker of many malignancies (17,21,24,25). In hepatocellular carcinoma (HCC), lower expression of Linc00261 was considered as an independent risk factor affecting postoperative recurrence-free survival time of the patients (16,26). And Linc00261 with other three lncRNAs (TRELM3P, GBP1P1, and CDKN2B-AS1) were identified as significantly correlated with overall survival (OS) of HCC patients (25). Cox model analysis result revealed that Linc00261 expression was also an independent prognostic factor for survival of GBC patients in this report.

In conclusion, this research evidenced that Linc00261 was downregulated in GBC and its expression level was associated with OS and PFS rate in GBC, which proved that Linc00261 can be an independent potential biomarker for the prognosis of GBC. Linc00261 in tissues or serum might be used as a potential marker for the prognosis of GBC, which may contribute to early diagnosis and treatment of GBC.

Funding: This study is funded by the Finding of Medical Talented Person in Yunnan Province (No. L-2017016).

Conflicts of Interest: All authors have completed the ICMJE uniform disclosure form (available at http://dx.doi.org/10.21037/tcr-20-1091). The authors have no conflicts of interest to declare.

Ethical Statement: The authors are accountable for all aspects of the work in ensuring that questions related to the accuracy or integrity of any part of the work are appropriately investigated and resolved. The study was conducted in accordance with the Declaration of Helsinki (as revised in 2013). The study was approved by the First People’s Hospital of Yunnan Province (approval number: KY-E-2017-1-20) and informed consent was taken from all the patients.