This focused series on “Clinic and Therapeutic Potential of Non-coding RNAs in Cancer” is edited by Drs. Alfons Navarro, Joan J. Castellano and Marina Díaz-Beyá.

Dr. Alfons Navarro is working since 2012 as Associate Professor in the Faculty of Medicine and Health Sciences of University of Barcelona. In 2008 obtained his PhD from the University of Barcelona. In 2010, he did a short postdoctoral stage at the Comprehensive Cancer Center at Ohio State University under the direction of Dr. Carlo M. Croce. In 2016, he obtained a MS in Bioinformatics and Biostatistics from the Open University of Catalonia. His research has focused on non-coding RNAs in solid and hematologic cancers, including colorectal cancer, non-small-cell lung cancer, Hodgkin lymphoma, acute myeloid leukemia, and multiple myeloma. His principal publications deal with the prognostic role of microRNAs and, more recently, piwiRNAs and lncRNAs in cancer patients. He has authored or co-authored 67 scientific articles in peer-reviewed journals, as well as several book chapters and presentations.

Dr. Castellano received his degree in Biotechnology by Universitat Politecnica de Valencia and his MSc in Biomedicine by University of Barcelona. He received his doctorate in Medicine and Translational Research from University of Barcelona for his work on lncRNAs in non-small cell lung cancer (NSCLC). His research as an Assistant Professor in Human Anatomy and Embryology in University of Barcelona focused in the exploration of non-coding RNAs as prognostic biomarkers in different cancer types including NSCLC, colorectal cancer and acute myeloid leukemia. In his thesis he studied the role of non-coding RNAs in NSCLC tumor tissue, but also in liquid biopsy samples and extracellular vesicles. He found that lincRNA-p21 levels in tumor tissue was a relevant relapse biomarker in resected NSCLC patients through angiogenesis regulation. Moreover, he also described that lincRNA-p21 were a relevant component of the extracellular vesicle’s cargo derived from the primary tumor which could be analyzed in tumor draining vein during the surgery process. He showed that the in vitro modulation of cellular lincRNA-p21 levels affected the microRNA cargo of extracellular vesicles and their angiogenic properties. He now works as a post-doc in the Molecular Oncology and Embryology laboratory of the Faculty of Medicine and Health Sciences of the University of Barcelona.

Dr. Díaz-Beyá is a clinical Hematologist with expertise in hematological malignancies. She received her degree in Medicine by Universidad of Murcia and completed her training in Hematology at Hospital Clinic of Barcelona. She received her doctorate in Medicine from the Faculty of Medicine and Health Sciences of University of Barcelona in 2014. Her area of clinical research is acute myeloid leukemia (AML) and myelodysplastic syndrome (MDS). In this line, she has participated in numerous AML and MDS clinical trials (phase I-III). Her translational research is in the field of non-coding RNAs in AML. She has focused on the study of microRNAs and long non-coding RNAs as prognostic biomarkers in AML. She has published numerous peer-reviewed research articles on these topics.

Disclosure:
The focused series “Clinic and Therapeutic Potential of Non-coding RNAs in Cancer” was commissioned by the editorial office, Translational Cancer Research without any sponsorship or funding. Huan Giap and Eric Y Chuang are serving as the unpaid Guest Editors for the series. 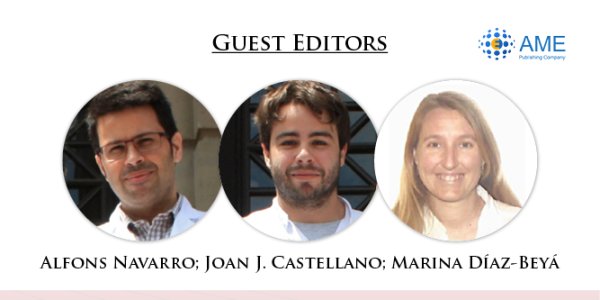