By definition, gliomas are brain tumors emanating from glial precursor cells. Gliomas include glioblastoma (GBM), astrocytoma, oligodendroglioma, and ependymoma. The World Health Organization (WHO) traditionally classifies brain tumors according to their pathological features, with GBM having the highest grade (IV), while lower grades (mostly II, III) are typically assigned to various types of astrocytic, oligodendroglial, and ependymal tumors (1), which collectively are referred to as lower grade gliomas (LGG). In the latest NCI SEER (Surveillance, Epidemiology, and End Results) report and projection, the estimated 2016 incidence and deaths for brain and other CNS tumors is 23,770 and 16,050, respectively (2). According to CBTRUS (Central Brain Tumor Registry of the United States), glioma represents about 27% of all, and 80% of malignant brain and CNS tumors (3). The majority (55.1%) of gliomas are classified as GBMs. For GBMs, the current standard of care consists of surgical resection, radiotherapy with chemotherapy (temozolomide or TMZ). The median survival rate, which ranges from 14.5 to 16.6 months [see (4,5) for review], remains dismally poor despite decades of research and discoveries, leading up to the current era of genomics, targeted therapeutics, and immunotherapeutics. LGGs on the other hand have more favorable clinical outcome, especially cases possessing IDH mutation and co-deletion of 1p and 19q chromosomal arms.

The molecular classifications of gliomas

The immune infiltrate signatures of gliomas

In order to obtain an expanded view of the types of immune processes which are upregulated as Risk Score increases, we ran GSEA (http://software.broadinstitute.org/gsea/index.jsp) on both TCGA GBM (154 primary tumors) and LGG (516 primary tumors) RNASeq-generated expression datasets (downloaded from UCSC Cancer Genomics Browser website: https://genome-cancer.ucsc.edu), against the Biocarta gene sets (http://cgap.nci.nih.gov/Pathways/BioCarta_Pathways) (See Figure 1A). Comparisons were made between HR and LR primary tumors. Consistent with the findings by Cheng et al., there is indeed a high degree of immune-related molecular signatures in HR relative to LR cases, for either cohort. These pathways include: ASBCELL (Antigen Dependent B Cell Activation), IL17 (IL 17 Signaling Pathway), TCYTOTOXIC (T Cytotoxic Cell Surface Molecules), THELPER (T Helper Cell Surface Molecules), GRANULOCYTES (Adhesion and Diapedesis of Granulocytes), CTL (CTL mediated immune response against target cells), CTLA4 (The Co-Stimulatory Signal During T-cell Activation), LAIR (Cells and Molecules involved in local acute inflammatory response), IL10 (IL-10 Anti-inflammatory Signaling Pathway), DC (Dendritic cells in regulating TH1 and TH2 Development), and CLASSIC (Classical Complement Pathway). Exemplified in Figure 1B is the CTL pathway, with ES of 0.88 and 0.90 for GBM and LGG, respectively. In this model, the cancer-specific antigen can be presented by the cancer cell through the MHC-1 receptor (indicated in the diagram as red-colored complex of HLA-A (α) and the beta-2-microglobulin (β) chains), to the cytotoxic T cell receptor (represented in the diagram as dark blue-colored complex of highly variable α and β chains, and the ζ, δ, ε, and γ proteins (coded by genes CD247, CD3D, CD3E, and CD3G, respectively). This connection between cytotoxic T cell (CTL) and the tumor cell then leads to eventual apoptosis of the tumor cell through Fas-Fas ligand interactions, and perforin-mediated granzyme activation of the caspase cascade. This interaction also triggers the proliferation of the cytotoxic T cell. The high ES values for this particular pathway can be explained by the elevated transcription (HR relative to LR) of all the genes involved in the process (Figure 1B). As shown in the inset table, genes presumed to be expressed in CTL, such as the T cell receptor genes (CD247, CD3D, CD3E, CD3G), PRF1, GZMB, FASLG, ITGAL, and ITGB2, as well as genes presumably expressed in the antigen-presenting cell, such as ICAM1, HLA-A, B2M, and FAS, are all over-expressed in HR relative to LR cases. The enrichment of the gene set THELPER (T Helper Cell Surface Molecules) is an indication of increased population of T helper cells infiltrating the HR tumors. The primary genetic markers of this particular gene set are the genes coding for the glycoproteins CD54 (ICAM1), CD4, and CD2, as well as T cell receptor component proteins, all of which are upregulated in HR relative to LR tumors. Also enriched in HR gliomas is the gene set for CTLA4 signaling (The Co-Stimulatory Signal During T-cell Activation), a pathway directly relevant to immunotherapy, given that CTLA4 is a primary target for checkpoint inhibition. The enrichment of CTLA4 pathway is driven by the upregulation (HR vs. LR) of genes coding for T cell surface molecules (CTLA4, CD28, ICOS, and the T cell receptor genes), intracellular tyrosine kinases crucial to T cell proliferation (LCK, ITK), as well as proteins on the surface or antigen-presenting cells (CD86, CD80, HLA-DRB1). The enrichment of inflammatory and neutrophil-recruiting IL17 Signaling Pathway is supported by the elevated expression of the cytokines IL6, IL8, and CSF3. The presence of granulocytes around HR tumors is supported by the elevated level of granulocyte surface molecules (ITGAM/CD11B, ITGB2/CD18, SELL/L-selectin), and the stimulating cytokines (IL8, CSF3, IL1A, TNF). Also likely to be more prominent around HR glioma cells are dendritic cells, needed for the stimulation of lymphocytes. The gene set DC (Dendritic cells in regulating TH1 and TH2 Development) acquired high ES due to the upregulation of IL10, CSF2, CD2, CD7, CD33, and CD40. The upregulation of complement components C7, C1S, C1QA, C2 explains why the gene set Classic (Classical Complement Pathway) is enhanced in HR relative eto LR glioma. The activation of B cells around HR gliomas is also likely as indicated by the enrichment of the gene set ASBCELL, with most of its component genes (IL10, CD28, CD80, FASLG, FAS, CD40, HLA-DRB-1, CD40LG) over-expressed in HR compared to LR glioma. 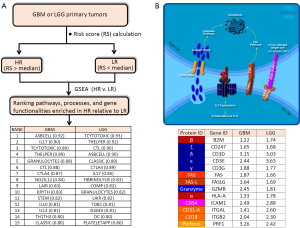 Figure 1 (A) A scheme to identify the molecular pathways and functionalities associated with elevated Risk Score (Cheng et al., 2016) in GBM and LGG. The top 15 Biocarta pathways (the ones exhibiting highest Enrichment Scores) for each cohort are mostly immune-related; (B) one of the pathways predicted to be upregulated in high risk (HR) relative to low risk (LR) GBM or LGG is the CTL pathway (cytotoxic lymphocyte mediated immune response against target cells), accessible at http://cgap.nci.nih.gov/Pathways/BioCarta_Pathways. Detailed descriptions of all the Biocarta pathways can be found at http://software.broadinstitute.org/gsea/msigdb/genesets.jsp. The inset table shows that many of the genes involved in the CTL pathway are upregulated in HR relative to LR cases (the numbers shown represent fold-change, calculated using Gene-E from Broad Institute). *, the original Biocarta figure for the CTL pathway does not include the text “or cancer cell”, which was added to emphasize that the antigen presenting cell may also be a cancer cell (e.g., glioma cell). Permission to use and modify the figure was granted by Biocarta.

What we illustrated here is that in glioma (GBM or LGG), molecular pathways pertaining to immune infiltration (e.g., CD4+ lymphocytes, Dendritic cells, Granulocytes, inflammation) may tend to be more pronounced among tumors with higher RS (9) (and lower overall survival). In GBMs, higher RS is also associated with the mesenchymal molecular subtype. In an earlier clinical study involving 23 GBM patients, Prins and colleagues have shown that tumor samples exhibiting mesenchymal molecular signature, indeed have higher population of both CD3+ and CD8+ lymphocytes (11), though others are of the opinion that increased tumor infiltration of CD3+ and CD8+ cells correlates with prolonged patient survival (12), and high level of CD4+ tumor infiltrating lymphocytes combined with low CD8+ tumor infiltrating lymphocytes is reported to be associated with unfavorable prognosis (13). Such studies also led to another important observation, that mesenchymal (thus more highly infiltrated) samples were more responsive to dendritic cell vaccination. It is quite plausible that gliomas with higher degree of immune infiltration (thus higher RS) may also respond more positively to checkpoint inhibitors such as the anti-CTLA4 ipilimumab and the anti-PD1 nivolumab and pembrolizumab. Ongoing clinical trials of these drugs against glioma include: NCT02311920 (phase I; ipilimumab and/or nivolumab in combination with temozolomide against newly diagnosed GBM or gliosarcoma), NCT02337491 (phase II; pembrolizumab with or without bevacizumab against recurrent GBM), NCT02017717 (phase III; effectiveness and safety of nivolumab compared to bevacizumab and of nivolumab with or without ipilimumab in GBM) [see (14), or clinicaltrials.gov]. It is worth noting that the fold-change (HR vs. LR) for CTLA4 is 1.6 and 1.7 for GBM and LGG, respectively, while the fold-change (HR vs. LR) for PD1 is 1.6 and 2.4 for GBM and LGG, respectively.

Provenance and Peer Review: This article was commissioned and reviewed by the Section Editor Ning Huang (Department of Neurosurgery, The Second Affiliated Hospital of Chongqing Medical University, Chongqing, China).

Conflicts of Interest: All authors have completed the ICMJE uniform disclosure form (available at http://dx.doi.org/10.21037/tcr.2016.10.69). The authors have no conflicts of interest to declare.