In the past decade, there has been particular excitement for the inclusion of immunotherapy approaches for the treatment of cancer, beyond conventional chemotherapy, radiotherapy and targeted therapies (1). Immunotherapy approaches are now designed mainly to overcome tumor immune evasion mechanisms and allow targeting of neoplastic cells by antitumor immune responses (1). The importance of both innate and adaptive immune responses against tumor growth has been supported by evidence from spontaneous and carcinogen-induced tumorigenesis in vivo models (2). Early studies showed that interferon gamma (IFNγ) and perforin play crucial roles in recognition and elimination of tumors cells in vivo (2,3). Additionally, mice with defective development or function of CD8+ cytotoxic T lymphocytes (CTLs), CD4+ Th1 helper T cells, natural killer (NK) cells, and/or NK1.1(+) T (NKT) cells have higher incidence and develop tumors earlier than immunocompetent control mice (2-4). However, this can also lead to the immunoselection of weakly immunogenic tumor cells that are less susceptible to immunosurveillance and present selective advantages to survive and grow in an immunocompetent host, as experimentally demonstrated in transplantation in vivo models (2,3).

The concept of cancer immunoediting is a dynamic process composed of three distinct stages: elimination, equilibrium, and escape (5). Elimination is the stage at which the hosts innate and adaptive immunity act to eliminate the developing tumor, possibly through detection of tumor antigens, stress ligands, damage-associated molecular pattern molecules (DAMPs), and “danger signals” such as Type I IFNs (5). However, sometimes, few low immunogenic tumor cells are capable of resisting this initial cancer immunosurveillance phase, and may enter into the equilibrium phase that is mediated solely by the adaptive immune system, including the responses of CD4+ and CD8+ T cells, IFNγ, and interleukin-12 (5,6). At this stage, tumor cells remain dormant, and often undetected, for an undetermined period of time (5-7). These cells can either remain latent or eventually resume growth, entering the escape phase. Potential mechanisms behind this tumor immune escape include the loss of tumor antigens, the secretion of immunosuppressive cytokines and other factors, and the development of an immunosuppressive tumor microenvironment through the recruitment of inflammatory immunosuppressive cells, such as regulatory T (Treg) cells and myeloid-derived suppressor cells (5,8). There is accumulating evidence that tumor progression, metastasis, and even development of drug resistance, rely on the support of macrophages and stromal cells attracted to tumor sites (8,9). For example, bone-marrow-derived mesenchymal stem/stromal cells were shown to be stimulated by breast cancer cells to produce the chemokine CCL5/RANTES, which in turn promotes the migration, invasion and metastasis of the malignant breast cells (10). In another study, mesenchymal stromal cells (MSCs) activated by platinum-based chemotherapy were found to induce resistance to several chemotherapeutic agents through the secretion of two unique fatty acids (11).

Over the past decade, there has been accumulating evidence that evasion of immune recognition and interaction with the microenvironment are important hallmarks of tumorigenesis and key elements for the development of cancer immunotherapy approaches (12). Although naturally occurring MSCs play pro-tumorigenic effects under certain microenvironmental conditions, their immunologic profile is characterized by the expression of very low levels of surface antigens, which prevents their rejection by host immune responses (13,14). Additionally, MSCs are easily grown in culture and can be genetically manipulated to selectively produce potent immunoregulatory factors (13,14). These characteristics, together with their homing capacities, makes these cells a promising tool for the development of novel anti-cancer treatments (13,14). Currently, MSCs are being tested in clinical trials for the treatment of several diseases, such as diabetes, organ transplantation, hematological, autoimmune, graft-versus-host, inflammatory, cardiovascular, and neurological diseases, and liver, kidney, lung, bone and cartilage injuries (13). Given their promising potential use in the clinic and their ability to migrate towards tumor sites (15), MSCs have been engineered to produce type I IFNs (16-18).

Type I IFNs are considered potent antitumor cytokines, but are of limited use in clinical oncology, primarily because high doses are required to elicit antitumor effects, which also lead to undesired side effects and toxicities (19). MSCs-producing type I IFNs were reported to deliver the desired cytokines at the appropriate levels into the tumor microenvironment, reducing the risk of IFN-mediated cytotoxicity in other organs. Additionally, these cells reduced tumor growth and metastasis in vivo (16-18). Previously, MSCs were shown to secrete multiple chemokines and inducible nitric oxide synthase (iNOS) in response to high levels of IFNγ and either TNFα, IL-1α or IL-1β, attracting T cells into their vicinity. Under these conditions, elevated nitric oxide (NO) production by MSCs inhibits T cell function (20). On the other hand, in the presence of low levels of inflammatory cytokines, NO production by MSCs is decreased, leading to stimulation, rather than suppression, of T cell immune responses (21). Additionally, iNOS−/− MSCs were shown to promote anti-tumor immunity in an in vivo mouse model for malignant melanoma (21).

Given this niche-dependent differential behavior of MSCs, Shou et al. (22) sought to determine the mechanisms of the antitumor effects exerted by MSCs-producing IFNα. Using the B16 mouse melanoma model, they found that IFNα acts synergistically with MSCs against tumor proliferation (22). Remarkably, MSCs primed with IFNα for 24 h prior to intramuscular co-injection with B16F0 melanoma cells in C57BL/6 mice suppressed tumor growth in vivo, whereas control MSCs slightly increased tumor growth (22). Interestingly, IFNα inhibited IFNγ and TNFα-induced iNOS expression in MSCs, but not production of other cytokines and chemokines that are responsible for attracting immune cells into the tumor microenvironment (22). IFNα was also shown to significantly diminish NO production by IFNγ and TNFα-stimulated MSCs, which could explain the IFNα-mediated reversal of the immunosuppressive effects of MSCs (22). These results are consistent with the high plasticity of MSCs and easiness for their molecular manipulation that may make them suitable candidates for clinical applications.

Type I IFNs bind to the type I IFN receptor (IFNAR) composed of the IFNAR1 and IFNAR2 subunits, whereas IFNγ binds to the type II IFN receptor (IFNGR) composed of two ligand binding IFNGR1 chains and two signal-transducing IFNGR2 chains (23,24). Each of these subunits of the IFN receptors is associated with a member of the Janus activated kinase (JAK) family (23,24). IFNAR1 is bound to TYK2, IFNAR2 and IFNGR1 are both associated with JAK1, and IFNGR2 is associated with JAK2. JAKs regulate tyrosine phosphorylation of the cytoplasmic domains of the receptor subunits creating docking sites for signal transducer and activator of transcription (STAT) proteins (23,24). STAT proteins are then phosphorylated by JAKs and form STAT-DNA binding complexes, which translocate into the nucleus and bind specific promoter elements of interferon-stimulated genes (ISGs), regulating their transcription (23,24). Engagement of IFNAR, but not IFNGR, leads to the formation of IFN-stimulated gene factor 3 (ISGF3) complexes composed by STAT1, STAT2, and IRF9, which bind and control IFN-stimulated response elements (ISRE) in the promoter regions of several ISGs (23,24). In contrast, type II IFN signaling triggers the formation of STAT1:STAT1, and STAT3:STAT3 homodimers and STAT1:STAT3 heterodimers that bind IFNγ activation site (GAS) elements present in the promoter of specific ISGs (24). Moreover, it has been shown that type I and type II IFN biological responses are differently affected in mice expressing cooperativity-deficient STAT1 (25). IFNγ-induced transcription of ISGs, production of NO, and antibacterial responses are defective in cooperativity-deficient STAT1 mice, whereas IFNα-mediated transcription and biological responses were intact (25). These results support the idea that STAT1-cooperative DNA binding is crucial for IFNγ-mediated effects, but not for type I IFN-dependent responses (25). Shou et al. (22) demonstrate that IFNα suppresses iNOS expression in MSCs stimulated with IFNγ and TNFα by promoting the switch from STAT1 homodimers that bind GAS elements in the promoter region of iNOS gene to STAT1:STAT2 heterodimers that form the ISGF3 complex with IRF9 and bind ISRE in the promoter of other ISGs. Thus, in the presence of both IFNα and IFNγ, STAT1:STAT2 heterodimers are preferentially formed and compete over STAT1 homodimers, reducing the overall binding to GAS elements (22). Consequently, iNOS transcription is inhibited resulting in a reduction of NO production by MSCs and in an enhancement of anti-tumorigenic effects (22) (Figure 1). Notably, these IFNα–medicated effects were not observed in macrophages, suggesting that this regulation of iNOS transcription is cell-type specific, possibly due to the involvement of distinct transcription factors and epigenetic events in different cells (22). 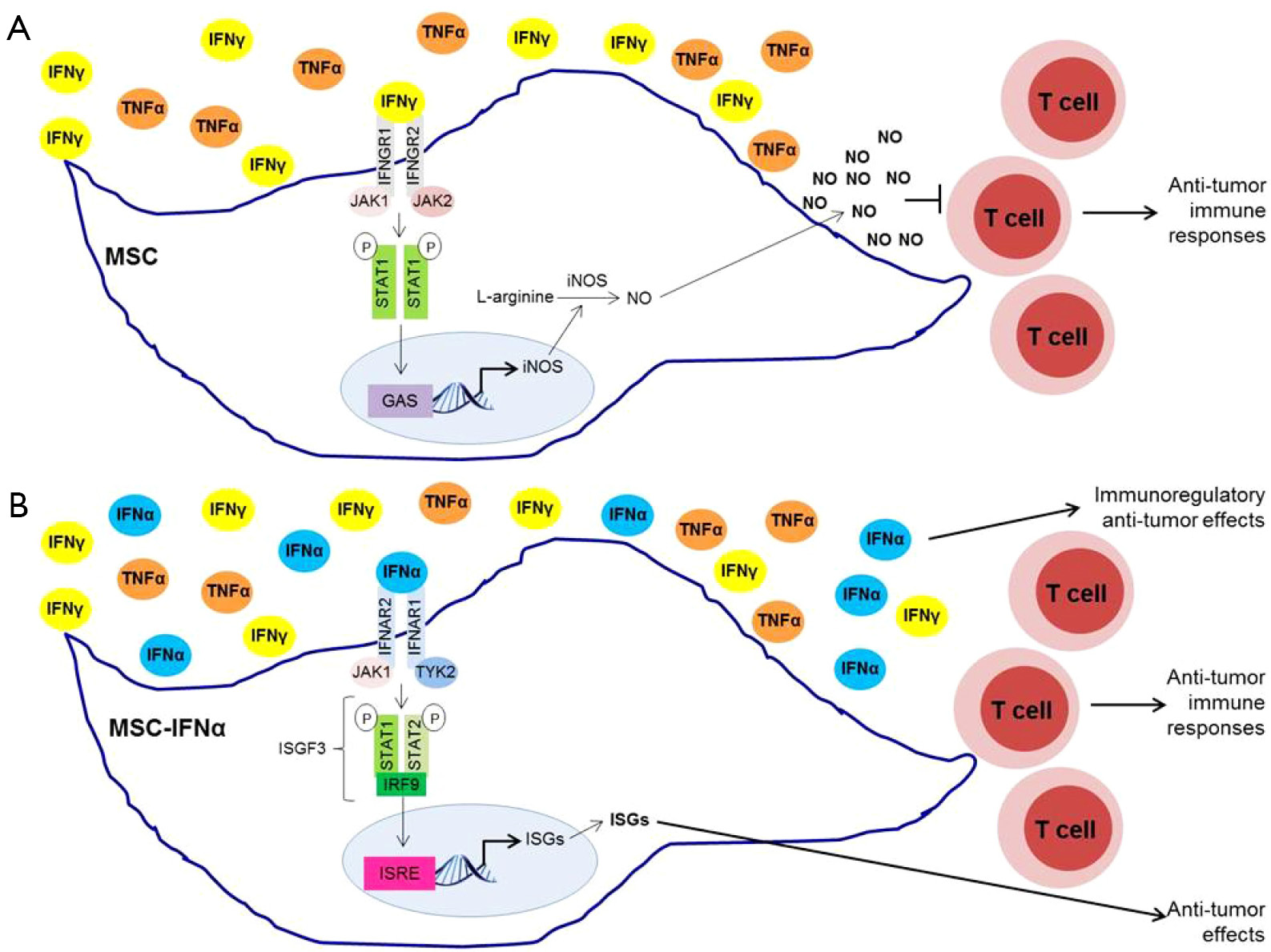 Figure 1 Anti-tumorigenic effects of IFNα-secreting MSCs. (A) MSCs produce chemokines in the presence of high levels of IFNγ and TNFα, attracting T cells to the tumor site. Under these conditions, engagement of IFNGR induces activation and dimerization of STAT1 proteins, which translocate into the nucleus, binding GAS elements in the promoter region of iNOS gene. Translated iNOS converts L-arginine into NO, which is secreted into the tumor microenvironment, inhibiting T cell function. (B) In contrast, under the same conditions, IFNα-secreting MSCs still produce high levels of chemokines, attracting T cells, but not iNOS and NO. In the presence of IFNα, the formation of ISGF3 complexes is favored over STAT1 homodimers, leading to the transcription of ISRE-driven ISGs, thereby potentiating MSCs-IFNα-mediated anti-tumor effects.

Although further studies are required to elucidate how IFNα and IFNγ influence different cellular events in a cell-specific manner, the study of Shou et al. (22) has important implications, as it supports the potential use of MSCs in clinical oncology as an IFNα delivery tool. Additionally, this study highlights the importance of a clear understanding of signal transduction events and pathways activated by different cytokines in different cell types when planning the development of unique immunotherapeutic strategies. Besides the classical JAK-STAT signaling pathway, type I and type II IFNs have been shown to activate other signaling cascades that are required for optimal transcription of ISGs (23,24,26). Moreover, a crosstalk between STAT and mTOR signaling pathways has been observed in different immune and stromal cells (27). Further studies to fully elucidate how IFNs control other pathways to modulate biological responses in MSCs may expand the potential for development of unique immunotherapeutic strategies for the treatment of several malignancies.