In eukaryotic cells, the nucleo-cytoplasmic transport is critical for regulating cell cycle, transcriptional activation, and repression (1). Large molecules such as proteins and RNAs require specific nucleo-cytoplasmic trafficking machinery. There are four main categories of nuclear transport factors: (I) karyopherins (importins or exportins), transport receptors that recognize cargoes for transport which occurs in the beginning of transport; (II) nucleoporins, the proteins of the nuclear pore complex (NPC), serve as the sole gatekeepers regulating the exchange of material between these compartments; (III) the Ran GTPase, together with its regulators control the rate of cargoes in/out of the NPC and the loading/unloading of cargoes; and (IV) specialized factors promoting transport of protein or RNA complexes (1,2).

Transport substrates destined for the nucleus carrying nuclear localization signals (NLSs) or cargoes to be exported from the nucleus carrying nuclear export signals (NESs) are recognized by particular soluble transport receptor proteins. NLS, an amino acid sequence typically consisting of positively charged lysine or arginine, functions as a “tag” on the exposed surface of a protein. NES is a short amino acid sequence which containing hydrophobic residues in a protein. Alterations of nuclear-cytoplasmic transport have been observed in different cancer cells, involving in signal-transduction pathways (2).

In the study recently published in Nature (3), Kim and colleagues found that KRAS-mutant non-small cell lung cancer (NSCLC) cells were selectively sensitive to KPTs, chemical inhibitors of exportin 1 (XPO1), also known as chromosome region maintenance 1 (CRM1). The authors also showed strong mechanistic evidence indicating that NF-κB and FSTL5/YAP1 signaling pathways are critically contributing to the intrinsic resistance in this process. They concluded that XPO1-dependent nuclear and cytoplasmic trafficking would be a druggable liability in KRAS-mutant lung cancers especially when coupled with genomics-guided patient selection. This article reveals the new approach of selectively treating NSCLC patients with KRAS-mutation(s) through targeting XPO1/CRM1.

XPO1/CRM1, one of the well characterized nuclear export receptors, was first identified in the yeast, and is a conserved gene in eukaryotes. XPO1/CRM1 protein plays an essential role in NES-dependent nuclear export (4-6). XPO1/CRM1 protein contains a highly conserved central region involved in RanGTP-dependent NES recognition and a cysteine residue that could be covalently modified by antibiotic leptomycin B (LMB) (7). XPO1/CRM1 overexpression has been identified and is associated with negative prognosis in various tumors, such as cervical, ovarian, and pancreatic cancers (5) (Figure 1). Data from our lab first demonstrated that CRM1 plays critical roles in lung cancer development (8,9). CRM1 is overexpressed in tobacco carcinogen 4-(methylnitrosamino)-1-(3-pyridyl)-1-butanone (NNK)-transformed lung epithelial cells, NNK-induced lung adenocarcinoma, and human lung cancer cells/tissues (10). The relevance of CRM1 in various human neoplasms and its promise as a therapeutic target are evident by its regulation to various cancer related proteins, including tumor suppressor genes, oncogenes, and enzymatic therapeutic targets (Figure 1). 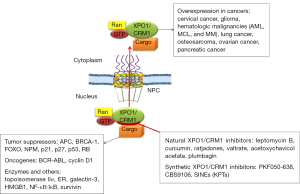 Lung cancer remains the leading cause of cancer deaths worldwide, and NSCLC is the predominant form of lung cancer (about 85% of all lung cancers). The relative survival rate for lung cancer has increased slightly, but lung cancer still remains extremely lethal, with a 5-year survival rate of only about 15% in the United States. Unclear molecular mechanisms and lack of sensitive and specific biomarkers for early diagnosis and molecular therapeutics are the major reasons for the result of unchanged lung cancer incidence, diagnosis, and prognosis.

Although inhibiting XPO1/CRM1 provides a promising new therapeutic approach for cancer treatment including lung cancer, it brings more challenge to incorporate this regimen into the treatment protocol of lung cancer clinic, such as identifying clinically relevant sub-population and the practical usefulness of XPO/CRM1 inhibitor(s). Although KRAS mutations are frequently (30–50%) observed in NSCLC, mostly in adenocarcinoma and undifferentiated large cell carcinoma, and, to a lesser extent, in squamous cell carcinoma (11,12), a lot of accumulating evidence suggests that KRAS mutation may not “behave” as expected as an ideal biomarker of cancer risk, although its undeniable role in carcinogenesis. On the other hand, NSCLC is a heterogeneous disease, with the presence of different clinically relevant molecular signatures besides KRAS mutations. As an example, highly and frequently expressed EGFR in NSCLC has become an important therapeutic target for lung cancer treatment.

Many natural and synthetic XPO1/CRM1 inhibitors have been found and/or developed (Figure 1), their clinical usefulness as a sole or combinative agent for lung cancer treatment demands further investigation. Several studies from our lab showed that blocking CRM1 inhibits lung cancer cell growth and synergistically enhances the efficacy of therapeutic effects if combined with cisplatin, doxorubicin, or epigallocatechin-3-gallate (10,13-15). The newly developed CRM1 inhibitors (5,6,16,17), especially selinexor (KPT-330), open an avenue to offer much translational value. Selinexor has been evaluated and showed to be first-in-class XPO1/CRM1 antagonist and a novel and safe therapeutic in Phase I/II clinical trials in patients with hematological malignancies or solid tumors (16,18,19). The phase I clinical trial for KPT-330 showed that gastrointestinal toxicities were the most common adverse events, which were also reported previously by phase I clinical trial for LMB, an potent inhibitor of XPO1/CRM1. The phase I trial of LMB was unsuccessful due to its side effects, which included some malaise and anorexia (20). These are common side effects for many effective cancer drugs, which may diminish at lower doses when used as a combinative agent. Additionally, LMB has showed a relative higher potency and different functional mechanisms in lung cancer cells compared to other XPO1/CRM1 inhibitors including KPTs. Therefore, in addition to KPTs, the clinical application of LMB as an adjuvant therapy also deserves a thorough re-evaluation.

In conclusion, the results by Kim et al. (3) contribute to our knowledge on the significance of XPO1/CRM1 in combination with mutated-KRAS for lung cancer treatment. The gain could be more meaningful to expand and clarify the mechanistic importance of the specific molecular cargoes in this process and characterize the significance of XPO1/CRM1 in lung carcinogenesis and its specific mechanisms as compared to other cancers so that the results can be eventually translated into the clinical practice.