Considering that, as recently as 10 years ago, physicians caring for patients with advanced lung cancer had only a handful of conventional cytotoxic agents from which to choose, the field’s recent development and competition seem truly remarkable. A prime example of this shifting and crowded landscape is immunotherapy. Since 2015, three different checkpoint inhibitors targeting programmed death 1 (PD-1) or PD-1 ligand (PD-L1) have received U.S. FDA approval, with several others currently in clinical trials. While these drugs may differ by specific target (PD-1 versus PD-L1), antibody species (humanized versus fully human), and IgG subclass (IgG1 versus IgG4), it remains unclear whether there are clinically meaningful differences in efficacy or toxicity between these agents.

The treatment of anaplastic lymphoma kinase (ALK)-positive lung cancer has seen similar developments. Although these cases represent only 3–5% of non-small cell lung cancer (NSCLC), researchers and pharmaceutical companies have devoted intense effort to this disease subset. The field received an initial boost by the rapidity of drug development. Largely because the first-generation ALK inhibitor crizotinib was already under clinical development as a MET inhibitor, the interval between discovery of the ALK target and evidence of a clinically effective drug was a remarkably short 3 years (1-4), compared to 41 years between the discovery of BCR-ABL and approval of imatinib and 26 years between the discovery of epidermal growth factor receptor (EGFR) and approval of erlotinib (4). For ALK-positive lung cancer, the pace of development has not slowed. Within 3–5 years, so-called second-generation ALK inhibitors such as ceritinib and alectinib, both of which have clear activity in crizotinib-resistant cases, were available. By contrast, it took more than a decade to develop and approve a late-generation EGFR inhibitor that had meaningful efficacy in erlotinib- and gefitinib-resistant cases (5).

This time period also saw increased understanding of the heterogeneous and complex science of crizotinib resistance in ALK-positive lung cancer. Broadly, mechanisms can be characterized as pharmacologic or biologic. Pharmacologic reasons may include patient non-adherence, reduced absorption, drug interactions, and most importantly inadequate blood-brain barrier penetration. Indeed, up to 40% of progression on crizotinib occurs in the central nervous system (6). Biologic mechanisms include bypass tracks with alternate oncogenes such as EGFR and V-Ki-ras2 Kirsten rat sarcoma viral oncogene homolog (KRAS) (35% of cases) (7,8), ALK gene copy number gain (20% of cases) (9), and ALK resistance mutations (35% of cases). To date, more than a dozen ALK resistance mutations have been identified, including gatekeepers analogous to T790M in EGFR mutant NSCLC (10) and T315I in chronic myeloid leukemia, which reduce crizotinib binding and enhance ATP affinity (8,11-14). A potential explanation for why this secondary mutational landscape is more complex than that of EGFR (which is dominated by exon 20 T790M) is that EGFR resistance mutations appear to convey a selective growth disadvantage (8,15) whereas ALK mutations may increase proliferation (8).

Continuing this trend, in a recently published phase 1/2 trial, Gettinger and colleagues show that the potent oral ALK inhibitor brigatinib has comparable efficacy to other late-generation ALK inhibitors but a distinct toxicity profile (21). In preclinical models, brigatinib has a broader spectrum of activity than ceritinib and alectinib, including not only ALK resistance mutations but also ROS1 fusions and mutant EGFR (22). The trial enrolled a total of 137 patients in a phase 1 dose escalation cohort (N=66) and five disease- and molecularly-defined phase 2 cohorts (N=69). Although multiple molecular diagnostic techniques for diagnosis of ALK positivity, including next generation sequencing and ALK protein expression by immunohistochemistry (23), in addition to fluorescent in situ hybridization (FISH), are now widely accepted in this trial, enrollment into ALK cohorts required demonstration of ALK gene fusion by FISH. Treatment-related adverse events were predominantly grade 1–2 and included nausea, fatigue, and diarrhea. Grade 3–4 events included increased lipase concentration, hypertension, and most notably pulmonary toxicity, including a 4% rate of fatal events. Radiographically, these cases featured linear or ground glass opacities. In the phase 2 trial, two dosing regimens were initially studied: 90 mg orally daily and 180 mg orally daily. Due to the emergence of pulmonary toxicity within 48 hours of treatment initiation in the 180 mg cohort, the schedule was modified to include a 7-day lead-in of 90 mg daily. Overall, 14% of patients required dose reductions.

Brigatinib demonstrated an efficacy profile expected for contemporary late-generation ALK inhibitors. Among the eight crizotinib-naïve ALK-rearranged cases, all responded [median progression-free survival (PFS) not reached]. Response rate was 74% for crizotinib-treated cases (median PFS 14.5 months). Intracranial response rate was 50%. Median intracranial PFS was 15.6 months for all assessable patients and 22.3 months for assessable patients with no prior brain radiotherapy. Activity was also noted in ROS1-positive NSCLC, as well as other ALK-rearranged malignancies including inflammatory myofibroblastic tumor and neuroendocrine tumor. Despite encouraging preclinical data, only 5% of EGFR-mutant NSCLC cases had an objective response.

These results lead to as many questions as they answer. Are second-generation ALK inhibitors best used as initial treatment or following crizotinib failure? It would seem that reserving second-generation ALK inhibitors for post-crizotinib failure would yield the greatest overall period of disease control. However, first-line use of drugs such as ceritinib or alectinib may have greater PFS than the overall combined PFS when they follow crizotinib (18,24). Which cases of ALK-positive brain metastases may be treated medically, and which are best approached initially with resection or radiation therapy? In this trial, enrollment of previously untreated brain metastases was limited to those that were neurologically stable and not requiring escalating steroid doses or anticonvulsants. Could brigatinib use be extended to those patients with symptomatic intracranial disease? At what point should disease progression on an ALK inhibitor be addressed with a change in systemic therapy, and when can local treatments be employed to prolong disease control? Small series have demonstrated that surgical resection or stereotactic ablative radiation in cases of oligo-progression, with continuation of the initial systemic targeted therapy, may extend disease control for several months (25). Such an approach is particularly effective against intracranial progression, presumably because it may represent failure of drug delivery rather than emergence of systemic resistance. Perhaps the most relevant to the trial under discussion: which second-generation ALK inhibitor has greatest efficacy? Which has the least toxicity?

While it may be difficult to distinguish the clinical efficacy of the various PD-1/PD-L1 inhibitors from one another, it has become clear that there are sufficient distinguishing characteristics among ALK inhibitors that, at least in some cases, their selection may be tailored to individual cases (see Table 1). Importantly, non-ALK activity may differ substantially. Crizotinib and brigatinib have efficacy against ROS1-positive NSCLC, but alectinib does not. Unique among clinically available ALK inhibitors, crizotinib also has activity against NSCLC harboring tyrosine-protein kinase Met (cMET) exon 14 mutations (29,30). Activity also differs across the spectrum of secondary ALK resistance mutations. Indeed, some rare cases of molecular resistance to late-generation ALK inhibitors regain sensitivity to crizotinib (31). Realistically, there are too many mutations and too many drugs for clinicians to remember these associations. Awareness of and access to these data are critical to optimal patient care. Similarly, physicians must thoroughly understand each drug’s monitoring requirements and toxicity profile. Crizotinib may cause hypotension, while brigatinib may cause hypertension. Ceritinib may cause diarrhea, while alectinib may cause constipation. The visual changes associated with crizotinib may be striking. However, they do not impact visual acuity and resolve spontaneously in most cases despite continued drug administration. Oncologists unfamiliar with this clinical pattern may inappropriately reduce or discontinue dosing. Brigatinib pulmonary toxicity suggests that combinations with immune checkpoint inhibitors be approached with caution. 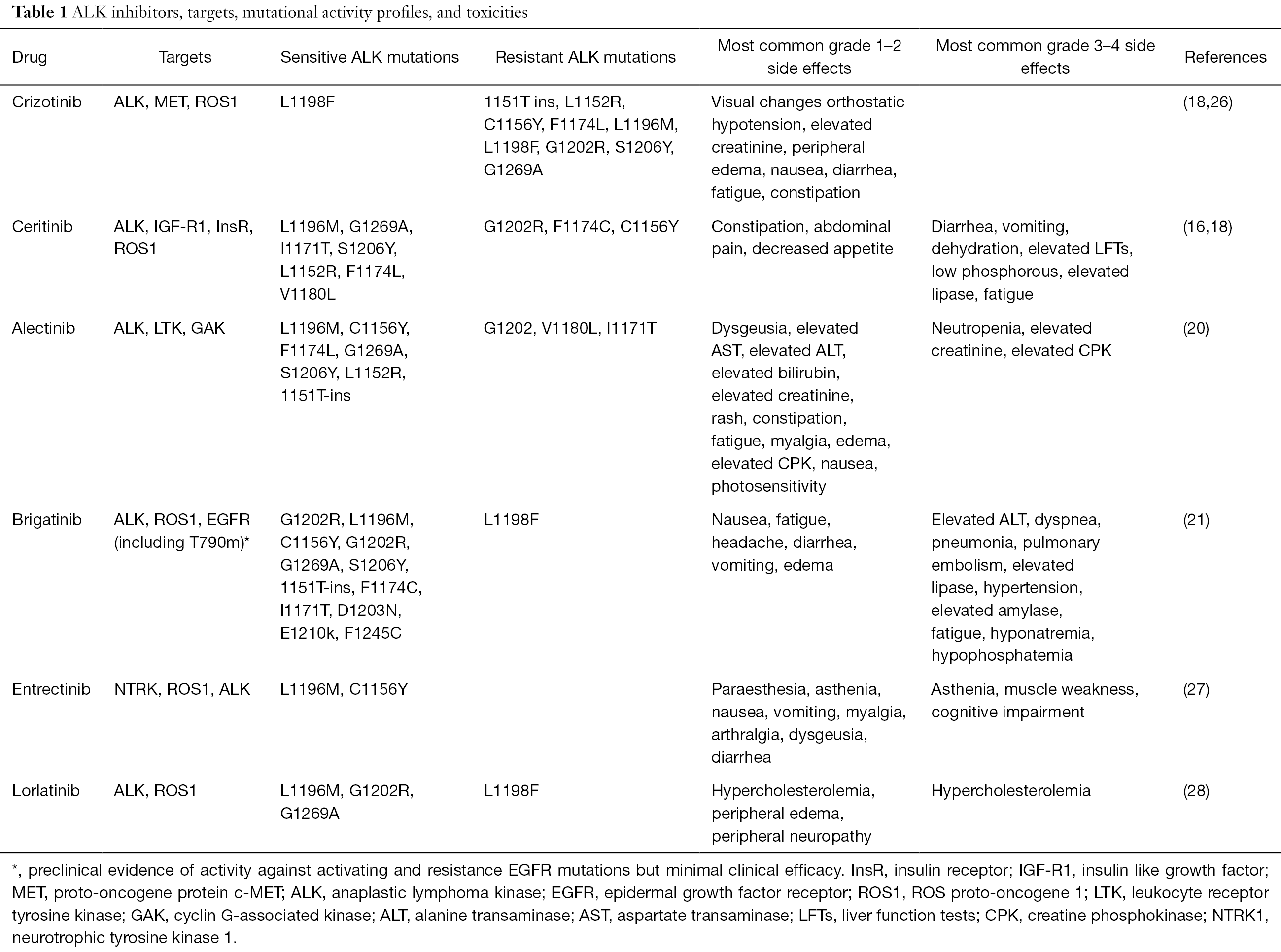 While the addition of brigatinib strengthens our anti-ALK armamentarium, it represents an incremental rather than revolutionary advance. ALK inhibitors and other molecularly targeted therapies requiring daily administration convey chronic toxicities that may rarely be severe but frequently impact quality of life. And clinical outcomes remain suboptimal. We continue to measure survival in intervals of several months. Particularly given the relatively young age of many ALK-positive patients cancer, in 2017 a diagnosis of advanced ALK-rearranged NSCLC remains tragic, with decades of life lost. Let us hope that forthcoming discoveries can truly change that.

Funding: This article is funded in part by a National Cancer Institute Midcareer Investigator Award in Patient-Oriented Research (K24CA201543-01) (to DE Gerber).