The metastatic niche in the liver: tilling the soil for pancreatic cancer progression

Pancreatic ductal adenocarcinoma (PDAC), the fourth leading cause of cancer-related death, has a poor overall survival rate with less than 7% of patients surviving for longer than 5 years after diagnosis (1), largely due to the lack of effective screening methods and therapeutic options. In fact, compared to other cancer entities that have benefited from significant improvements in screening and therapy, PDAC is predicted to become the second most lethal cancer by 2030 (2).

Despite this rather dismal outlook for pancreatic cancer, the field of cancer therapy as a whole has been positively changing over the last 5 years (3). Almost 14 years after the introduction of Gemcitabine as the standard of care for the treatment of PDAC, new chemotherapeutic options now promise an increase in the overall survival of PDAC patients. New first line palliative therapies for stage III and IV cancer such as FOLFIRINOX (4) or gemcitabine combined with nab-paclitaxel (5) are already used in daily practice, and the number of second line palliative therapies, like OFF (6) or nanoliposomal irinotecan combined with 5FU (7), are increasing. Likewise, there is a shift in intensifying adjuvant therapy by using Gemcitabine in combination with capecitabine (8), and the results of the recent APACT trial suggest a potential benefit of adding Nab-paclitaxel to Gemcitabine in the adjuvant setting (9).

While these data are quite promising, most patients still present with a metastatic disease at the time of diagnosis with little to no hope for cure. Early detection of the disease would undoubtedly increase the number of tumors diagnosed at an early stage, thus increasing the rate of resections in curative intent that currently can only be offered to a small minority of PDAC patients (10); however, thus far no screening tools or methods have been developed to achieve such a goal. Additionally, 63% of patients that receive a resection for curative intent will eventually develop metastatic disease, local recurrence, or both months or years following surgical intervention, and only 22% of patients survive without tumor recurrence after surgery with adjuvant therapy (11). Thus understanding the mechanisms that are involved in the metastatic process is pivotal in order to improve the survival of both patients undergoing surgical resection and patients with locally advanced disease.

The liver is the main venous drainage point of the mesenteric organs and thus the most common site of pancreatic cancer metastasis. While its anatomical situation is important, many other factors also promote metastatic spread to the liver. For example, the properties of the metastatic cell(s) that promotes metastases and the factors that support the implantation of this cell(s) in the liver are likely equally as important. Regarding the latter, among the key and most prominent cellular players that promote the formation of the “metastatic niche” in the liver are immune cells, such as natural killer cells (NK), T-cells, Kupffer cells (tissue-resident macrophages), tissue infiltrating monocytes/macrophages and dendritic cells (12). Additionally non-immune cells such as stellate cells have also been shown to play an important role in the regulation of the tumor microenvironment, and in the maintenance of cancer stem cells (13). Soluble factors also promote the crosstalk between tumor cells and the surrounding tissue, and important secreted factors including transforming growth factor beta (TGF-β) and the chemokine stromal cell-derived factor-1 (SDF-1) have been shown to be important for cancer cell intravasation and migration to the liver. TGF-β can act on tumor cells as well as on stromal cells. In cancer cells, TGF-β has been shown to induce epithelial-to-mesenchymal transition (EMT), thus promoting invasion (14). The upregulated expression of SDF-1 in metastatic target organs such as the liver plays an importing role for the “homing” of metastatic tumor cells, mediated by the SDF-1 receptor CXCR4, which is expressed on metastatic subpopulations of cancer (stem) cells (15).

Based on detailed analyses of soluble serum factors in cancer-bearing patients and experimental mice, a new signaling crosstalk has been proposed in recent years. Based on the fact that certain serum factors were shown to be altered in mice bearing malignant precursor lesions in the pancreas [called pancreatic intraepithelial neoplasia (PanIN)], the hypothesis of “crosstalk between the premalignant lesion and the future metastatic organ” was born (Figure 1). Two soluble serum factors have been identified to prepare the metastatic niche in the liver already during the early stages of PDAC development: cancer-cell-derived exosomes and tissue inhibitor of metalloproteinases-1 (TIMP1). Glypican-1 (GPC1) containing exosomes were identified in PanIN-bearing mice and in the serum of PDAC patients (16). Importantly, the level of these exosomes correlated with tumor burden before and after tumor resection, and the level of cancer-cell-derived exosomes correlated with the survival of these patients. In addition, pancreas-derived exosomes containing macrophage migration inhibitory factor (MIF) were shown to be taken up by Kupffer cells to stimulate hepatic stellate cells to produce fibronectin by secretion of TGF-β. These factors prepared the metastatic niche by arresting bone marrow-derived macrophages in the liver. Blocking of MIF-containing exosomes prevented niche formation and pancreatic cancer metastasis in mice (17). 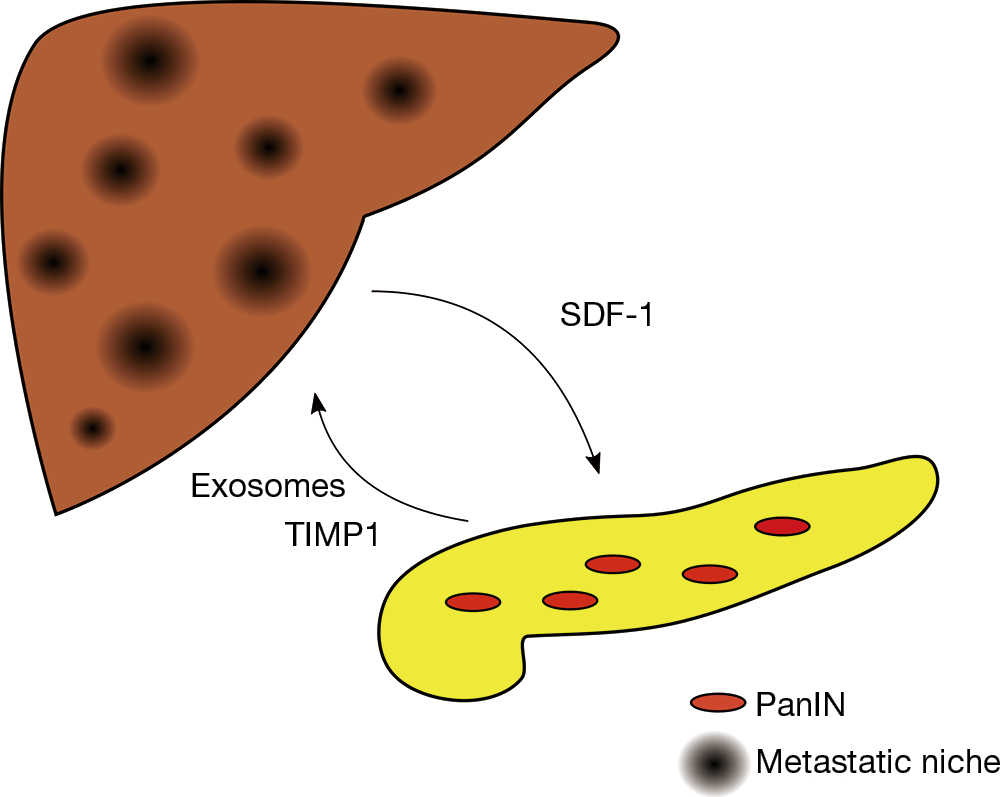 The second factor that has been shown to prepare the hepatic metastatic niche during PDAC development is TIMP1. While this molecule was initially described as a protease inhibitor (18), studies have ascribed specific biological activities to TIMP1 that are independent of metalloproteinase activity. For example, TIMP1 was reported to promote cell growth in different cell lines (19). Interestingly, a study by Jung et al. showed that the main binding partner of TIMP1 on the cell surface is CD63 (20). In a study by Seubert et al., increasing TIMP1 levels in mice led to an increase in tumor cell homing to the liver (21), and livers “primed” with high serum levels of TIMP1 were shown to produce SDF-1, fibronectin, and TGF-β. Furthermore, an enrichment of hepatic neutrophils was also observed. These neutrophils are recruited along the SDF-1/CXCR4 axis that is used by CXCR4-expressing tumor cells to invade the liver and other metastatic sites rich in SDF-1. As we have demonstrated before, this mechanism of metastasis can be abolished by blocking CXCR4, either using the small molecule AMD3100 or a specific inhibitory antibody (15). In a recent study Grünwald et al. shed more light on how pancreatic tumors prepare the metastatic niche in the liver already in the early stages of tumor formation: TIMP1 activates hepatic stellate cells via CD63 binding, and upon this activation HSCs produce endogenous TIMP1 and SDF-1 (22). Again, neutrophils are attracted to the liver, which in addition to other cell types, help prepare the metastatic niche. Accordingly, serum TIMP1 levels were shown to be elevated in patients with PDAC, highlighting an association between TIMP1 and PDAC patient survival (23).

The question still remains, “Will these improvements in our understanding of the mechanisms promoting the formation of the (hepatic) metastatic niche lead to a therapeutic improvement of our present clinical scenarios?” More than 50% of PDAC patients are determined to be at the metastatic stage at the time of diagnosis, precluding them from curative surgery, and approximately 78% of the patients that initially present with resectable disease will develop metastasis, local recurrence of the tumor, or will succumb to the tumor during the following months (11), suggesting that metastatic spread already occurred before surgery. Only case series are available evaluating neoadjuvant chemotherapeutic intervention for locally advanced unresectable tumors with FOLFIRINOX or Gemcitabine combined with Nab-paclitaxel, and the results thus far are disappointing as only very few locally advanced tumors are down-graded sufficiently to convert them into surgically resectable (24).

There is no doubt that patients who present with a locally advanced unresectable tumor would indeed greatly benefit from therapies that protect against metastatic spread until neoadjuvant therapies can sufficiently reduce tumors to a size permitting surgical resection. So while we continue to develop methods and systems to improve early tumor detection, identify groups at high risk, and improve our ability to effectively reduce the primary tumor mass to allow for curative resection, we should simultaneously step up research efforts focused on metastasis prevention, which would complement these aforementioned key objectives and add a new armament to the arsenal of weapons available to fight pancreatic cancer.

Funding: PC Hermann is supported by a Max Eder Fellowship of the German Cancer Aid [111746], by the Hector Foundation Cancer Research Grant (M.65.1), and Baustein Grants of the University Ulm [PC Hermann (LSBN0097) and A Hann (LSBR.0035)]. B Sainz Jr is supported by a Rámon y Cajal Merit Award from the Ministerio de Economía y Competitividad, Spain, a Clinic and Laboratory Integration Program (CLIP) grant from the Cancer Research Institute, NY, NY, USA (B Sainz Jr) and a Conquer Cancer Now Award from the Concern Foundation, LA, CA, USA (B Sainz Jr).