A number of studies have proposed that mammalian spermatozoa are guided within the oviduct towards the fertilization site by thermotaxis. Thermotaxis relies on a temperature gradient within the oviduct originated by a drop of temperature occurring at the utero-tubal junction during ovulation (1,2). This temperature gradient allows capacitated rabbit, bull, mouse and human spermatozoa to orientate their swim away from the utero-tubal junction, towards the warmer temperature, where the oocyte awaits (3-5). Based on empirical proofs, Bahat et al. (2012) (6) determined that spermatozoa can sense temperature changes as little as 0.0006 °C and change the direction of swimming towards the warmer temperature. This discovery leads to the intriguing questions of what is the cellular machinery conferring such extraordinary sensitivity to the spermatozoa.

The first proposed mechanism for sperm thermotaxis involved phospholipase C (PLC) pathway and calcium influxes towards the cytoplasm that in turn affects flagellar bending (7). Later, the model was expanded incorporating multiple opsins as possible thermosensors and another signaling pathway involving the phosphodiesterase (PDE) and Adenylyl cyclase (AC) (Figure 1) (3). This model suggests that both pathways modulate intracytoplasmic calcium levels for a fine tune control of the flagellar bending. The involvement of various sensors and signaling pathways could explain the extraordinary sensitivity of the system, as the thermal-sensitivity of each of the sensors could overlap and the effects generated by the activation of different components of one pathway can be counteracted by the other. In particular, the involvement of multiple calcium channels coupled to each of the pathways is expected to allow fine-tuned control over calcium fluxes. However, until now only TRPC3 (3) and IP3 receptor (7) have been shown to participate in sperm thermotaxis by controlling, respectively, the entrance of Ca+ through the plasma membrane and its release from the internal Ca+ storage towards the cytoplasm. Interestingly, CatSper, the specific and the main Ca+ channel of the mammalian spermatozoa has been revealed not to be involved on the thermotactic response of the spermatozoa (3). Thus, additional ion channels participating on this response are likely waiting to be discovered. 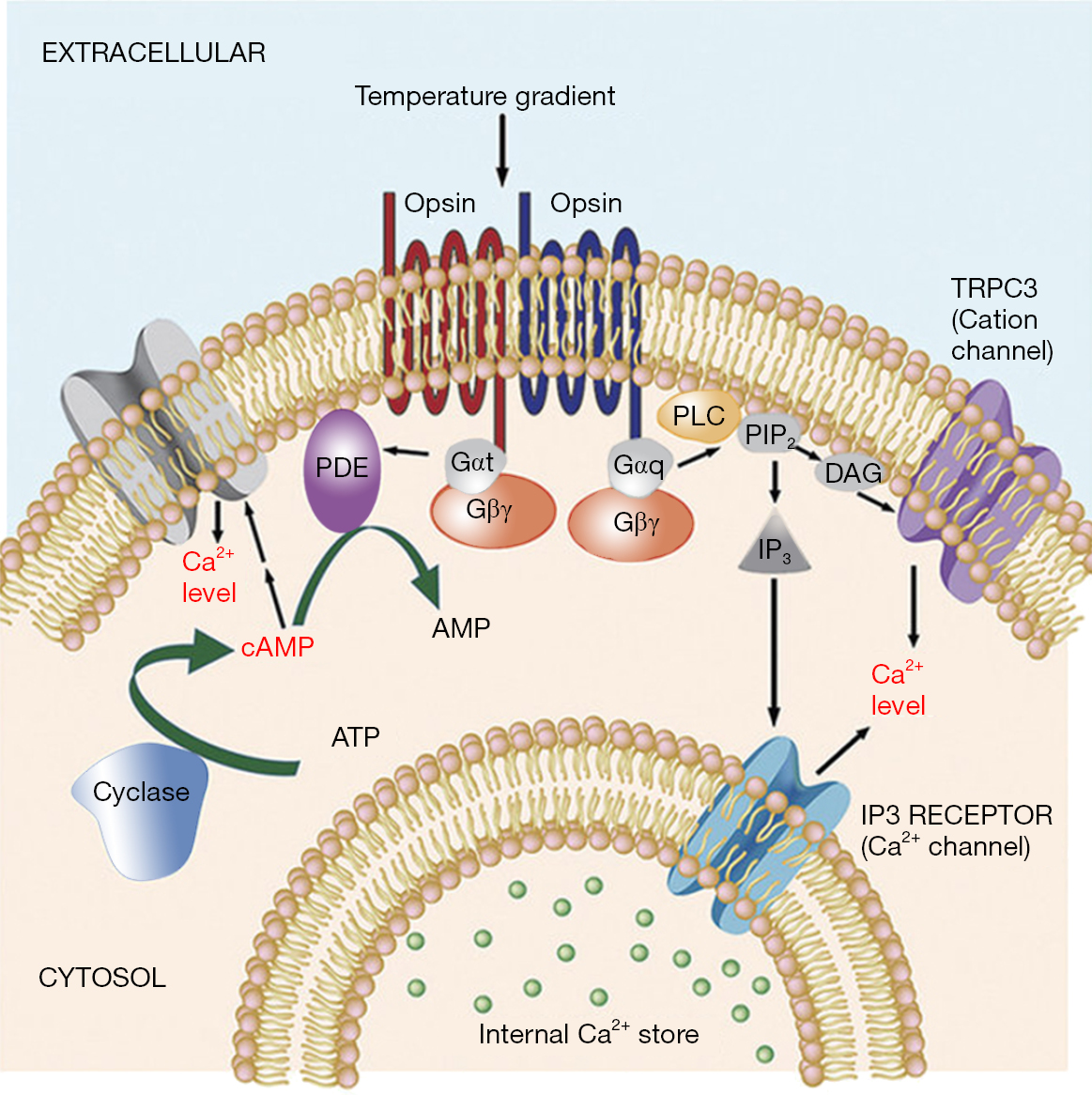 In December 2016 issue of Plos One, De Toni et al. (8) addressed the involvement of transient receptor potential vanilloid receptor (TRPV1) in mammalian sperm thermotaxis. The transient receptor potential (TRP) channels is a family composed by more than 30 members in which 6 have been found to be temperature sensitive for heat and cold (9). Within this family, TRPV1 is expressed in human spermatozoa, functioning in calcium trafficking towards the cytoplasm (10), which makes it a strong candidate for functioning in sperm thermotaxis as well. The results shown by De Toni el al. strongly suggest the presence of TRPV1 as mRNA and protein (as analyzed by RTPCR and Western blot) in the testes and in the ejaculated human spermatozoa. Immunocytochemical assay using a polyclonal rabbit anti-TRPV1 antibody detects TRPV1 in both Sertoli and germ-line cells within the testicle. The same assay, localizes TRPV1 in the principal piece, midpiece and acrosome in mature spermatozoa. These results enter in conflict with a previous publication showing an opposite distribution in human spermatozoa. Francavilla et al. (10), using another anti-TRPV1 antibody, observed that TPRV1 was only present in the postacrosomal region of the human spermatozoa. Unfortunately none of the studies have employed the mouse KO model for the target protein to validate their antibodies and unspecific staining could cause any of the staining observed. Thus, future work should clarify this important issue demonstrating the presence and localization of TRPV1 in human spermatozoa.

The evidences for the involvement of TRPV1 in the thermotactic response of human spermatozoa (8) are obtained by a validated thermotaxis assay based on a temperature gradient from 31 to 37 °C in the range of the sperm response (6,11). The authors applied this assay to analyze the relative amount of TRPV1 present in the sperm subpopulation that migrates towards the warmer temperature, using immunostaining and flow cytometry and reporting a significant enrichment in TRPV1 signal in those spermatozoa migrated by thermotaxis. This enrichment was especially relevant in the principal piece and mid-piece of the spermatozoa. Unfortunately, as discussed above, the presence and distribution of TRPV1 is in dispute so these results have to be carefully considered. Moreover, whether the staining is truly specific or not, the observed enrichment of TRPV1 in the migrated spermatozoa do not prove a direct role of this channel in the thermotactic response. Several publications have shown that TRPV1 is involved in the capacitation process of the spermatozoa modulated by cannabinoid signaling in bull, boar, mouse and human spermatozoa (10,12-15). Knowing that only capacitated spermatozoa acquire the ability to migrate within a temperature gradient (4,6), the observed enrichment of TRPV1 in the migrated spermatozoa may just reflect a higher proportion of capacitated spermatozoa in the migrated population compared to the non-migrated. In any of the cases, being cautious about the specificity of the antibody used, the results are very interesting, suggesting the involvement of TRPV1 in one of the physiological processes operating in human spermatozoa.

De Toni et al. (8) also validated a functional pharmacological assay by proving the migration of spermatozoa within a gradient of capsaicin (CPS), a TRPV1 agonist, towards the higher concentration. Furthermore, this migration was prevented by preincubation with capsazepine (CPZ), a TRPV1 antagonist, or with a rabbit polyclonal antibody against TRPV1. Although these results are straight forward and might indeed indicate TRPV1 involvement in sperm chemotaxis there are also few considerations for a correct interpretation. The sperm specific CatSper channel has been proven to lead the chemotactic response of the spermatozoa and to react promiscuously to a number of chemicals of different nature (16). Thus, the observed response provoked by CPS might have been due to a chemotactic response mediated by CatSper activation rather than by TRPV1. In fact, De Toni et al. (8) show that CPS provoked an increase in the percentage of hyperactivated motility, a motility mode that has been shown to be triggered through CatSper channel (17). Blockage of CatSper channel with its specific antagonist NNC 55-0396 (18) could clarify these result in future work. In addition, the possible interference with other cellular processes, such capacitation, provoked by the blockage of TRPV1 with either CPS or the polyclonal rabbit antibody could lead in an indirect reduction of the thermotactic response of the spermatozoa.

Calcium influxes provoked by TRPV1 activation were also proved by De Toni et al. (8) in response to CPS and the specificity was demonstrated by the blockage of the Ca+ influx using CPZ or the polyclonal rabbit-anti TRPV1 antibody. Furthermore, authors show higher intracellular Ca+ levels in spermatozoa selected by thermotaxis. With the reserves mentioned above, these results are in concordance with those of Bahat et al. (7) proving the involvement of both extracellular Ca+ and intracellularly stored Ca+ on sperm thermotaxis. Finally De Toni et al. (8) show that both CPZ and the polyclonal rabbit-anti TRPV1 antibody partially inhibited the thermotactic response, possibly by impairing the swift in motility patterns characteristic of the thermotactic sperm subpopulation. It is difficult to conceive that the extraordinarily temperature sensitivity of the spermatozoa is regulated by a single channel such as TRPV1 (3). Accordingly, De Toni et al. (8) were not able to fully inhibit the thermotactic response by blocking TRPV1. This result could suggest the involvement of additional channels such IP3receptors and TRPC3 already shown to be involved in sperm thermotaxis (3,7). As a matter of fact it is possible that TRPV1 participates downstream the signaling pathway proposed earlier (3) where the thermosensors are the opsins signaling through PDE/AC and PLC (Figure 1). Accordingly, Diacyl-glycerol, one of the products of the reaction catalyzed by PLC, potentiates TRPV1 activity (19). KO models could be used to unequivocally prove the role of a particular protein in sperm termotaxis, however, to date Rhodopsin remain the only gene whose involvement in thermotaxis has been proved by this approach (3).

Although the overall view of the results published by De Toni el al. (8) in Plos One points towards the involvement of TRPV1 in sperm thermotaxis, there are several aspects that should be clarified in following up investigations to verify whether TRPV1 is directly involved in thermotaxis or it is involved in concomitant processes such as capacitation or acrosome reaction. The involvement of several intracellular signaling pathways and channels in thermotaxis, including TRPV1, could explain the extraordinary temperature sensitivity of mammalian spermatozoa.