Can we efficiently and safely combine a pan-class I phosphatidylinositol-3-kinase inhibitor with paclitaxel in metastatic breast cancer?

Despite all therapeutic advances, patients with advanced and metastatic breast cancer (MBC) remain incurable in most cases. The majority of these patients progress after one to two years on first line systemic chemotherapy or endocrine therapy (1,2). Hence, there is a crucial need for more efficient and less toxic therapies in the first line setting and beyond to delay the time to progression and to improve outcomes.

The phosphatidylinositol-3-kinase (PI3K)/Akt/mammalian target of rapamycin (mTOR) signaling pathway is altered in the majority of cancers including frequent mutation and/or amplification of the genes encoding for the PI3K catalytic subunit p110α (PI3KCA) and mutation and/or inactivation of the phosphatase and tensin homolog (PTEN) (3). Although, frequently overlooked, mutations/amplifications in other key members of the PIK3CA pathway, including the protein kinase B family (AKT1-3) (4,5), exist. PI3KCA mutations induce cell proliferation and tumor growth in BC and are present in approximately 30% to 40% of BC patients depending on tumor phenotype (6). Over the last decade, the PI3K pathway has been the interest of many researchers. Several PI3K inhibitors were developed at different levels of the pathway in an attempt to improve prognoses in the metastatic and ultimately the adjuvant setting. Figure 1 illustrates the main intracellular levels of the pathway and where inhibitors of the pathway are being tested. 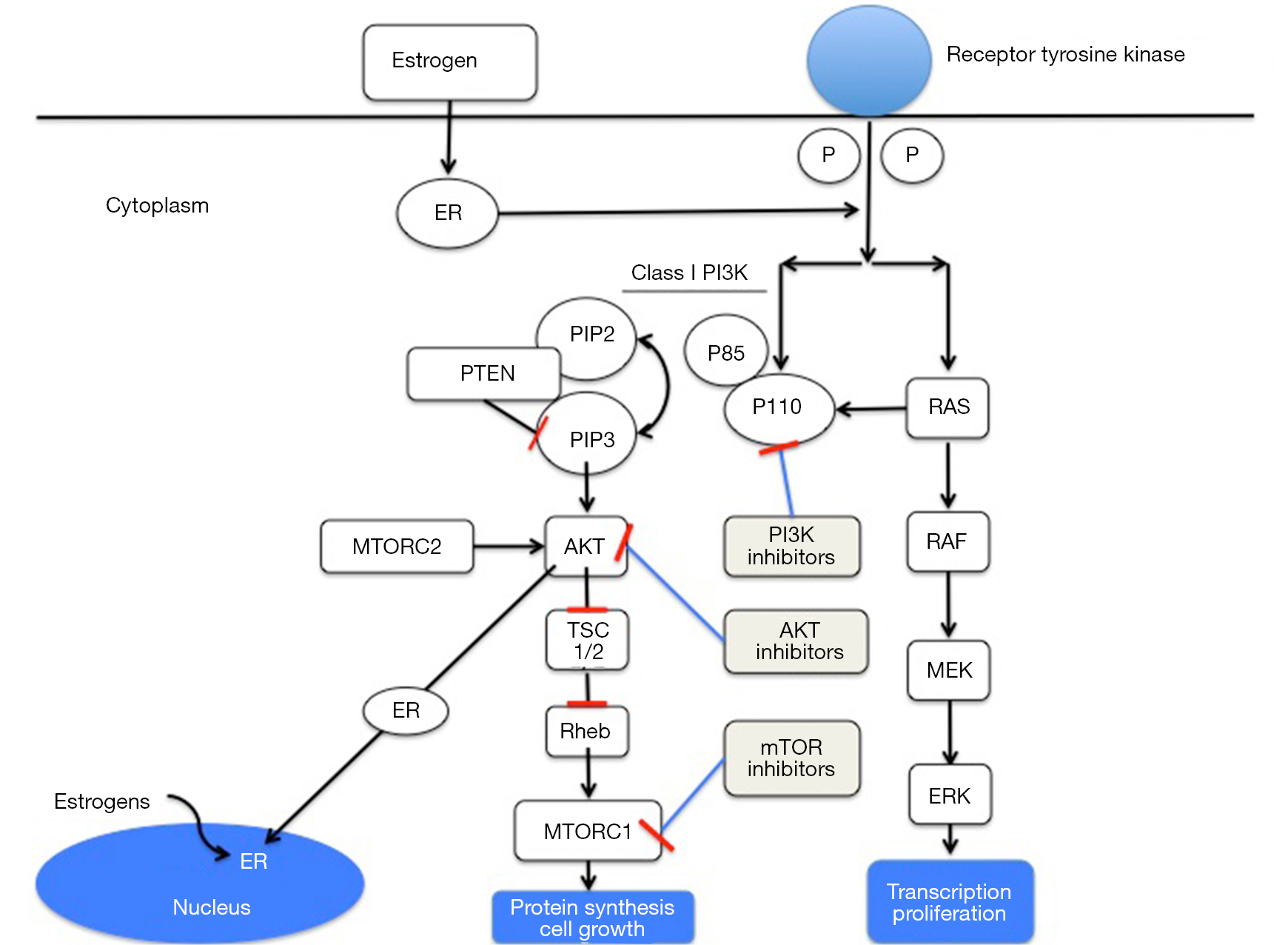 In the BELLE-4 trial (7), Martin et al. evaluated whether the addition of buparlisib [a pan inhibitor of class I PI3K isoforms (α, β, γ, δ)) to paclitaxel improved Progression Free Survival (PFS) and response rates (RR) in human epidermal growth factor receptor 2-negative (HER2-) MBC patients with no prior chemotherapy in the advanced setting. The study showed no statistically significant improvement in PFS or RR between the 2 arms neither in the whole population nor in the subgroup of patients with an identified PI3K pathway activation. Median PFS with buparlisib vs. placebo was 8.0 vs. 9.2 months with a hazard ratio (HR) of 1.18 (95% CI, 0.82–1.68) in the whole population. Patients with triple negative disease tended to have shorter median PFS with buparlisib vs. placebo (5.5 vs. 9.3 months; HR 1.86, 95% CI, 0.91–3.79) compared to the Hormone Receptor (+) group (9.2 vs. 9.2 months; HR 1.00 (95% CI 0.66–1.52) but these subsets did not differ significantly from the overall group. The addition of the PI3KCA inhibitor was also associated with increased toxicity and more treatment interruptions. The most common side effects leading to treatment interruption were skin and gastrointestinal toxicity, as well as psychiatric disorders. Subsequently, this phase II trial with an adaptive design was stopped for futility and the planned phase III trial was not initiated. In a preplanned biomarker study, PI3K pathway activation was defined as a PI3KCA mutation and/or mutation/loss of PTEN expression and was detected on fresh/archival biopsy tissue during screening.

There could be several reasons why the primary endpoints of the BELLE-4 study were not met: (I) a lack of synergism between the chemotherapy (paclitaxel) and the PI3KCA inhibitor in a chemotherapy-naïve population with no acquired resistance to therapy; (II) the PI3KCA mutation detected mainly on primary tumors and not in the metastatic setting; (III) incomplete assessment of molecular alterations in the PI3KCA signaling pathway; (IV) a heterogeneous population enrolled in the trial including Estrogen Receptor (ER) positive (+) and ER negative (−) patients that might have diluted the results; (V) the presence of subsequent escape pathways involving proteins such as KRAS or MEK/ERK that may have been activated by the PI3K pathway inhibition, leading to resistance (8,9).

Similarly, the PI3K/Akt/mTOR pathway plays a role in the resistance to anti-HER2 therapy in HER2-overexpressing BC (e.g., trastuzumab). Several trials showed a benefit when the pathway was inhibited in patients who were considered resistant to trastuzumab (13).

As for the subgroup of patients with no HER2-overexpression similar to the population enrolled in BELLE-4, evidence from the literature suggests that the activation of the PI3K pathway could play a role in resistance to paclitaxel (14). Consequently, the study was designed with the hypothesis that the addition of buparlisib to paclitaxel would delay disease progression. However, it is important to note that patients enrolled in the BELLE-4 study were chemotherapy-naïve in the advanced setting. In theory, these patients did not have an acquired resistance to systemic therapy and this could explain why the patients did not benefit from the addition of buparlisib to paclitaxel, a chemotherapy agent with known efficacy in that setting (15).

A further reason that PIK3CA pathway activated patients experienced no additional benefit from buparlisib in the current study may be that the PI3KCA/PTEN analysis was performed solely on tumor tissue, predominantly from the diagnostic rather than metastatic tumor. Contrarily, in the BELLE-2 and 3 studies, the mutation was also detected on circulating tumor DNA using patients’ blood samples (10,11). In these studies, the PFS benefit was not consistent between tumor-based and circulating DNA-based PI3KCA mutations. No PFS benefit was seen in wild-type patients based on primary tissue in the BELLE-3 trial and similarly no benefit in mutated patients based on archival tumors was seen in the BELLE-2 trial. Interestingly, a 21% discrepancy in frequency of mutations detected in the tumors, vs those detected via circulating tumor DNA was reported in the BELLE-2 study. The mutations detected by circulating tumor DNA were “hot spot mutations (activating)” and are therefore most relevant. In the BELLE-4 study the PI3K pathway activation status was mainly determined in archival tissue specimens that may not have accurately reflected current tumor status. Evidence suggests that tumor mutation status can change due to disease progression or exposure to prior treatments. Newer techniques, such as circulating tumor DNA analysis, may be essential to accurately identify current PI3K pathway-activated disease and provide more conclusive results (16).

Strategies for molecular stratification within clinical trials are challenging and can fail for multiple reasons including lack of demonstrable drug activity, poor clinical trial design and poor molecular stratification design. Within BELLE-4, the reasons for failure to demonstrate activity within a predefined sub-group are likely multifactorial and include: (I) failure of busparlisib to demonstrate clinical efficacy in the main trial—such that either the effect postulated in the molecularly altered sub-strata needed to be modest or that a significant benefit for patients with molecularly “positive” (PIK3CA/PTEN altered) tumors would need to be offset by a negative effect for patients without such alterations and/or (II) incomplete assessment of molecular alterations in the PIK3CA signaling pathway or of related alterations. Whilst PIK3CA mutations are amongst the most common in BC, alterations in this pathway are not confined to PIK3CA/PTEN. Approximately 5% of ER (+) BCs harbor AKT1 mutations (5), and gene duplications in PIK3CA and AKTs are also documented (3). Incomplete characterization of molecular alterations throughout signaling pathways hampers many studies seeking to identify interactions between targeted therapeutics and the molecular composition of treated tumors.

Another factor that might have contributed in diluting the treatment efficacy was the MBC phenotype permitted in the BELLE-4 study. Martin et al. recognized in their discussion that the ER (−) subgroup behaves differently than Hormone Receptor (+) patients and might benefit less from this combination therapy as it was reported. Triple negative BC phenotype is associated with a lower incidence of PI3KCA mutations and more PTEN loss (17). Consequently, inhibiting the PI3KCA might not be as efficient as in Hormone Receptor (+) BC patients. Furthermore, in the triple negative phenotype, the high number of mutations and copy number changes of genes responsible for cell cycle arrest might limit the efficacy of single agents PI3K inhibitors (17). This does not seem to explain the lack of benefit seen in the BELLE-4 study, as in a subgroup analysis, the Hormone Receptor (+) patients did not derive a meaningful benefit either. Moreover, another similar study (PEGGY study) (18) assessed another pan PI3K inhibitor (pictilisib) with paclitaxel only in ER (+) patients and no PFS benefit was seen. It is noteworthy to mention that in both studies, a higher incidence of toxicities (rash, fatigue, psychiatric disorders, increased liver enzymes) was reported with the combination arm and more dose modifications and interruptions were made subsequently. This could explain a lack of consistent pharmacodynamic activity. Therefore, it is still not clear whether a PI3K inhibitor can exert a synergistic effect on paclitaxel if a dose high enough to sustain PI3K pathway inhibition with no reduction in paclitaxel exposure and duration could be achieved.

The therapeutic efficacy of single-agent PI3K pathway inhibitors is likely limited by feedback regulations among its pathway components and crosstalk with other signaling pathways. Several pathways such the Receptor tyrosine kinase and ERK, can be activated and upregulated following the PI3K pathway inhibition, leading to a limited efficacy. There are ongoing efforts to investigate predictors of response and mechanisms of treatment resistance. A good example would be the mTOR inhibitors (e.g., everolimus) that were tested in ER (+) BC patients. An improvement in PFS only and not Overall Survival was shown in the BOLERO-2 study and one of the explanations is that these drugs only inhibit the mTORComplex1 (mTORC1) and not the mTORC2 leading to a feedback upregulation of Akt activity (12,19). Furthermore, the PI3KCA mutation was not predictive of treatment response in that study and only archival tumor specimens were obtained to detect the mutation; another potential explanation of the lack of benefit of these drugs in BOLERO-2 and the predictive value of the mutation as a valid biomarker (20).

Table 1 summarizes the most relevant phase II and III trials assessing the pan PI3KCA inhibitors in BC.

An analogy could be made between the PI3K pathway inhibitors and the aromatase inhibitors and the way they evolved over the years. Going back to the 1980s when first and second generations of aromatase inhibitors were used, toxicity and the inconvenience of administration (e.g., intramuscular injections) were the main concern with these agents despite their efficacy. Aminoglutethimide, a first-generation aromatase inhibitor, affected several adrenal steroid pathways producing lethargy, ataxia, vertigo and sleepiness (soporific actions) as well as antitumor response (25). First and second generation agents were initially used with some effectiveness but in the second line setting after tamoxifen (26). Then third generation aromatase inhibitors were discovered and found to cause more than 98% aromatase inhibition (27) without affecting other steroid pathways. They rapidly became the new standard treatment in MBC and subsequently early BC. Unlike first and second-generation drugs, they have a highly targeted inhibition of the aromatase pathway leading to significantly fewer endocrine-related side effects and better tolerance. Somewhat similarly with the PI3K inhibitors, the biomarker of response is not clearly identified and validated and their mechanism of action is not completely elucidated. Ongoing trials are currently testing new PI3K inhibitors that selectively inhibit the alpha catalytic subunit [e.g., SOLAR-1 phase 3 trial (28)] with the rationale of decreasing toxicity and dose reduction/delay and increasing compliance. We will eagerly be waiting for these results to see if a valid biomarker can be identified and if these drugs have truly a clinical benefit in BC patients based on their mechanism of action and preclinical as well as early promising clinical data (29).

We believe that patients’ selection is important for these agents as not all BC type rely on the same isoform (p110) for cell growth. While p110α is critical for PIK3CA-mutant BC, p110β appears to be particularly important for those with loss of PTEN. Consequently, we need to identify which subgroup of patients will benefit the most from a specific drug inhibiting a particular pathway.

Our take home messages for clinicians and researchers are that large correlative studies with banking of sufficient tumor samples for mutation analysis are needed to identify biomarkers that will guide the management of a malignancy as heterogeneous and complex as BC. Strategies that combine PI3K pathway inhibitors (PI3KCA inhibitors with/without mTOR inhibitors) with inhibitors against Receptors of tyrosine kinase (RTKs), or inhibitors against MEK, MYC, PARP, or STAT3 pathways, or agents that activate autophagy and apoptosis machineries, are being explored in an attempt to improve BC outcomes.