Will PI3K-targeted therapies for cancer become a reality?

In a recent issue of Annals of Oncology, Vuylsteke and colleagues presented the interim analysis of phase II PEGGY study on the use of pictilisib [a pan-phosphoinositide-3-kinase (PI3K) inhibitor] plus paclitaxel in hormone receptor positive human epidermal receptor 2 (HER2) negative (ER+/HER2−) locally advanced or metastatic breast cancer (1). This clinical trial is one among the many clinical trials to report clinical benefits and toxicity associated with PI3K-targeted therapies.

The PI3K-Akt-mTOR pathway is a major signaling pathway in pathophysiology of breast cancer. PI3K binds to phosphorylated tyrosine on a variety of receptor tyrosine kinases, including epidermal growth factor receptor (EGFR), insulin-like growth factor 1 receptor (IGF1R), insulin receptor, and HER2, leading to their activation and downstream signaling (2). Mechanisms leading to constitutive/aberrant activation of the PI3K pathway in cancer include (I) the mutation and/or amplification of PIK3CA, the gene encoding the α-catalytic subunit of the kinase (p110α); (II) the loss of expression of the PTEN phosphatase that reverses PI3K action; (III) the activation downstream of oncogenic receptor tyrosine kinases; and (IV) the activating mutation/amplification/translocation of Akt isoforms (AKT1, 2, and 3), kinases that mediate downstream signaling. A hyperactive PI3K pathway increases cell proliferation, migration, invasion, metabolism, angiogenesis, and resistance to chemotherapy through activated anti-apoptotic machinery. Although PI3K pathway was considered as a therapeutic target even before genomic era, interest on this pathway skyrocketed after discovery of frequent mutations/amplification in PIK3CA subunit in many different cancer types (Figure 1). Breast cancer field took the lead because of high frequency mutations and our previous work demonstrating intimate link between estrogen receptor (ER) and PI3K signaling (4). Somatic mutations have been identified in PIK3CA (36%), PIK3R1 (3%), PTEN (3%) and AKT1 (2%) genes in the pathway (5). Activating mutations in the catalytic PI3-kinase subunit PIK3CA occur in 36% of breast cancers overall and are especially prevalent in luminal-ER+ and HER2-amplified breast cancers (range, 29–45%) (6). PIK3CA amplification is more common in basal-like breast cancers (6).

Figure 1 cBioportal data (3) showing frequency of PIK3CA mutation/amplification/deletion in various cancers. Only those cancers with >10% aberration frequency are shown.

Encouraged by compelling preclinical data supporting the role of mutant PIK3CA in breast cancer, several drugs targeting PI3K were developed in the last few years. Pan-PI3K inhibitors [such as pictilisib (GDC-0941), XL147, buparlisib (BKM120), and the irreversible PX-866] target all p110 isoforms (9). Because of its narrower activity and broader specificity, this class of drugs may be better suited to treat tumors regardless of a PIK3CA mutation such as the triple-negative breast cancer. Phase I trials with buparlisib (BKM120) and XL-147 showed that treatment partially inhibited PI3K as measured by levels of p-S6 and P-AKT in patients’ skin or tumors, and by 2-deoxy-2-[18F]fluoro-D-glucose uptake measured by positron emission tomography (FDG-PET) (10). The adverse-event profiles of pan-PI3K inhibitors have been primarily mild to moderate and manageable with supportive medications. Dose-limiting toxic effects reported with multiple agents include hyperglycemia, maculopapular rash, gastrointestinal intolerance (anorexia, nausea, vomiting, dyspepsia, diarrhea), and stomatitis. Although some of these are “off-target” effects, others may be related to target engagement and directly related to mechanisms of action, such as hyperglycemia, which is more commonly seen upon more sustained inhibition of p110α. Hyperglycemia is expected with this class of drugs because of the need for AKT activity for insulin action (11). In the case of sustained inhibition of p110δ, lymphopenia is common, since the δ isozyme is highly expressed in lymphocytes. Interestingly, buparlisib (BKM120) can cross the blood-brain barrier, potentially inhibiting PI3K in the central nervous system (12,13). In phase I clinical trials, some patients treated with buparlisib developed mood alterations (anxiety, irritability, or depression) likely resulting from inhibition of PI3K in the central nervous system (10,14,15).

Recent focus has been on isoform-specific PI3K inhibitors to avoid the side effects of pan-PI3K inhibitors. Specific inhibitors of p110α [e.g., alpelisib (BYL719) and MLN1117] and p110β-sparing inhibitors [e.g., taselisib (GDC-0032)] were designed to work better against PIK3CA-mutant tumors. p110δ is highly expressed in lymphocytes. Therefore, p110δ inhibitors [e.g., idelalisib (CAL-101)] were initially developed in hematologic malignancies. Idelalisib was, in fact, the first PI3K inhibitor to get approved for the treatment of relapsed chronic lymphocytic leukemia.

Both pan-PI3K inhibitors and isoform-specific PI3K inhibitors are currently in different phases of clinical development (9), alone or in combination, in both solid tumors and hematologic malignancies (Table 1 for partial list). The rationale for the use of PI3K inhibitors in hormone receptor positive breast cancer came from preclinical evidence with ER+/PI3K-mutant breast cancer cells and xenografts suggesting that simultaneous inhibition of PI3K and ER exerts synergistic antitumor activity (16,17). The first reported clinical trial of a PI3K inhibitor combined with endocrine therapy was a phase Ib study of buparlisib with the aromatase inhibitor letrozole in postmenopausal patients with ER+ metastatic breast cancer (14). The combination was safe with reversible toxicities. The clinical benefit rate (lack of progression ≥6 months) among all patients treated at the maximum tolerated dose (100 mg/day) was 31%. Of note, PIK3CA mutation status did not predict clinical activity. Buparlisib is now in two ongoing phase III trials, in combination with fulvestrant or placebo, in postmenopausal ER+/HER2– metastatic breast cancer refractory to aromatase inhibitors (BELLE-2; ClinicalTrials.gov NCT01610284) and refractory to aromatase inhibitors and everolimus (BELLE-3; ClinicalTrials.gov NCT01633060). Initial findings from BELLE-3 suggest clinical benefits with Buparlisib plus endocrine therapy but at the cost of severe adverse events including attempted suicides (15). 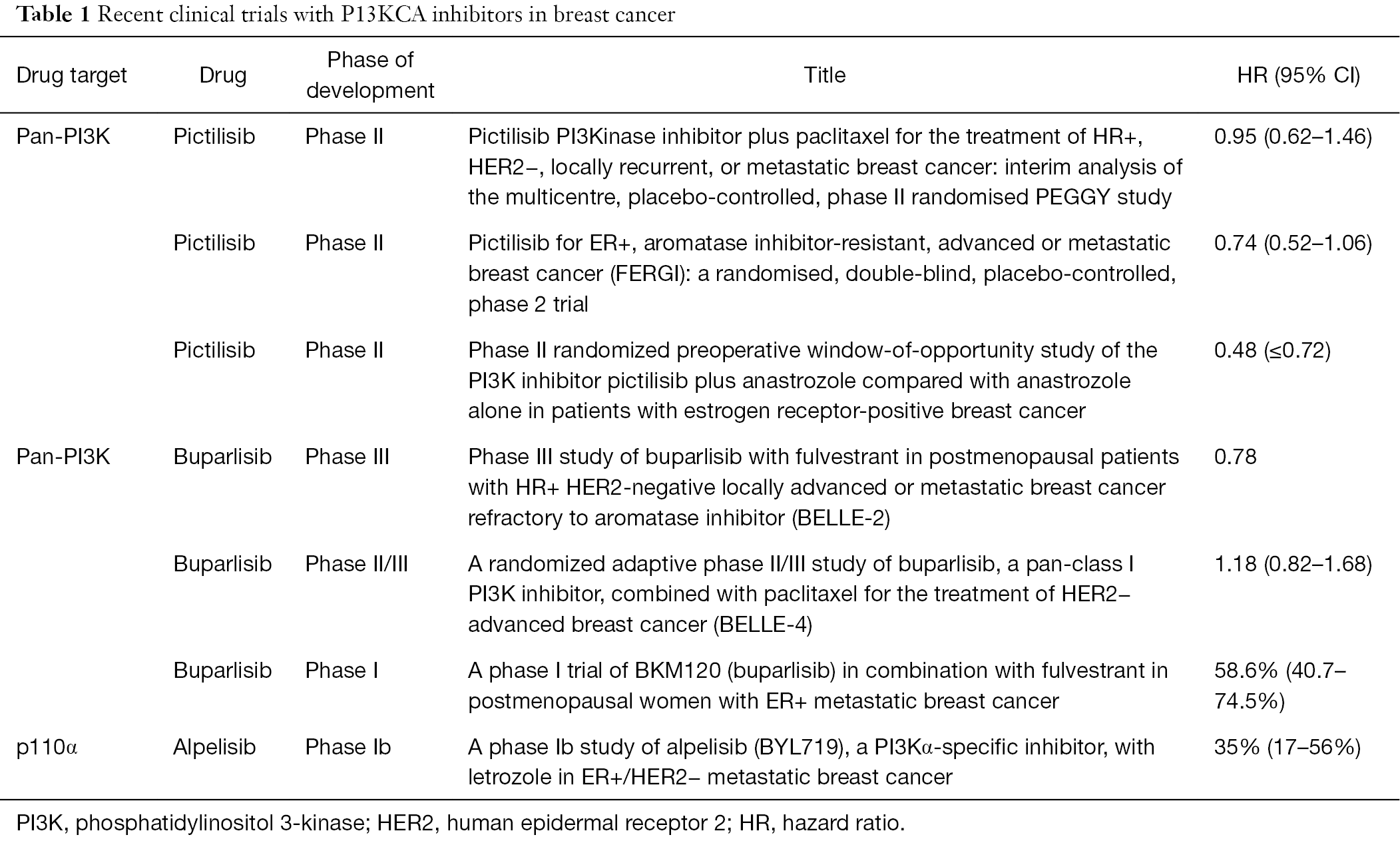 In the PEGGY trial (1), patients with metastatic or locally advanced hormone receptor-positive HER2 negative breast cancer were randomized to receive paclitaxel with or without pictilisib. Pictilisib is a selective orally available pan-inhibitor of class I PI3K family members that inhibits the p110α, p110β, p110δ, and p110γ subunits of PI3K. This trial was based on preclinical studies showing enhanced antitumor activity of pictilisib and docetaxel combination (18,19). Pictilisib has also shown safety and tolerability in phase I trials, both alone and in combination with paclitaxel. The phase I trial of pictilisib in combination with paclitaxel showed a 6% complete response and 17% partial response (20). The PEGGY trial, however, failed to show any benefits of the combination in this Phase II setting. There was no significant progression-free survival (PFS) difference between arms in the intention-to-treat (ITT) population [8.2 vs. 7.2 months, hazard ratio (HR), 0.95; 95% CI: 0.62–1.46; P=0.83] or patients with PIK3CA-mutated tumors (7.3 vs. 5.8 months, HR, 1.06; 95% CI: 0.52–2.12; P=0.88). There was no difference in PFS in the preplanned subgroup analysis. Also, significant adverse events including grade 3 rash and grade 2 pneumonitis were seen in pictilisib arm. Rash was the main cause of study drug dose modification, leading to more drug interruptions (11.0% vs. 1.1%), reductions (14.3% vs. 0%), and withdrawals (2.2% vs. 0%) in the pictilisib arm compared with the placebo arm.

FERGI, a phase II trial of fulvestrant with or without the pan-PI3K inhibitor pictilisib for ER+ metastatic breast cancer refractory to aromatase inhibitors showed that the addition of pictilisib to fulvestrant failed to improve PFS in either PIK3CA-mutant or wild-type breast cancers (21). There has been a trend with this class of drugs towards failing in phase II/III trials after success in preclinical and phase I studies. Buparlisib is the other sister drug in the same class which has shown mixed results. While BELLE-4 was a negative trial (22) (the combination of paclitaxel with buparlisib did not show PFS benefits), BELLE-2 has been the only silver lining in this dark cloud. BELLE-2 showed a modest improvement with the use of buparlisib plus fulvestrant in patients with hormone receptor+, HER2− advanced breast cancer (23). It also showed a significant improvement in PFS in tumors that harbored PI3K mutations, which has not been seen in the previous trials with pictilisib. A recent phase I trial with alpelisib, a PI3K p110α specific inhibitor, has shown safety as well as efficacy with letrozole in ER+/HER2− metastatic breast cancer (24).

Several questions arise from the results of the above trials. Are we using wrong combinations or wrong drugs? Is pictilisib not as effective in combination with other drugs? Combining these drugs with chemotherapy is all the more challenging due to added adverse events requiring dose reductions. That may be why the only modest positivity has been seen in combinations with antiestrogens and not chemotherapy. Another reason of failure might be the complexity of the PI3K-AKT-mTOR pathway. Inhibition of this pathway can lead to feedback upregulation of pathways like FOXO3a-HER3, IGF1R, MEK-ERK and other genomic changes causing resistance mechanisms (3,25). Several challenges remain before we can accept this class of drugs. These include exploring mechanisms of resistance, identify the right combination of other targeted drugs to be used with PI3K pathway inhibitors, finding the optimal patient population for which this drug is most effective, exploring potential biomarkers of clinical response and dose-limiting toxicity that prevent achieving drug dose with anti-tumor effects.