Mechanisms of the sperm guidance, an essential aid for meeting the oocyte

In mammals, ejaculated spermatozoa must migrate into the female reproductive tract in order to reach and fertilize the oocyte (Figure 1). The number of spermatozoa that reach the oviductal isthmus (where they attach to oviductal cells and form the sperm reservoir) is small (1,2) and only ~10% of these spermatozoa in humans become capacitated (3) and acquire a state of readiness for fertilizing the oocyte. In addition, the sperm cells have a torturous and long way between the reservoir and the oocyte at the fertilization site (3–5 cm in humans) (2). These facts, together with the tiny dimensions of the gametes in comparison to the tube length make improbable the sperm arrival to the fertilization site and make evident the need for sperm guidance (4). Different guidance mechanisms appear essential for successful sperm arrival to the fertilization site: the short range mechanism such as chemotaxis (swimming up a chemoattractant gradient) (5) and the long range mechanisms such as rheotaxis (swimming against a fluid flow) and thermotaxis (the temperature-oriented cell motility) (Figure 1). 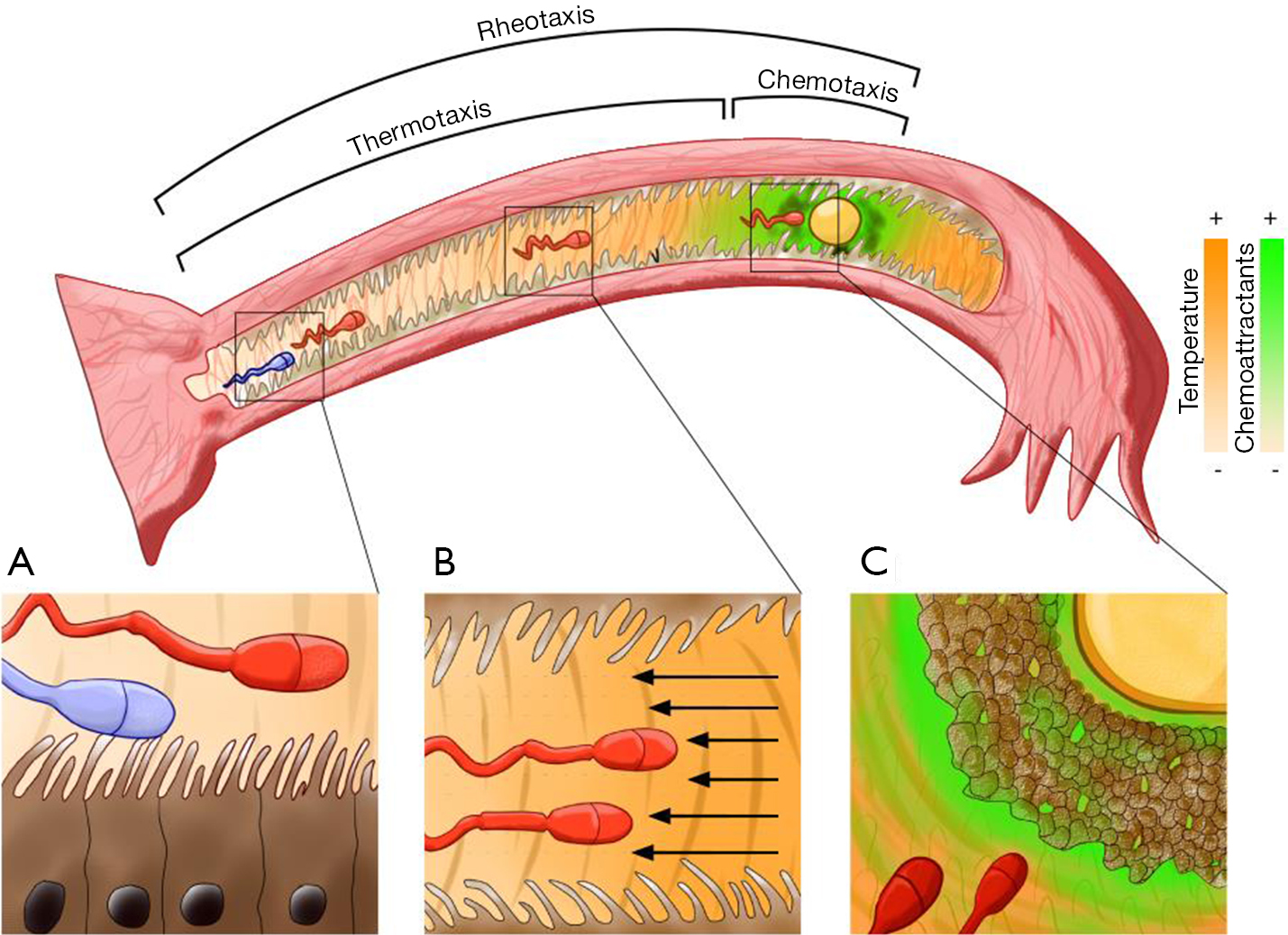 Figure 1 Schematic representation of the sperm travel through the oviduct. Guidance of spermatozoa to the oocyte is mainly conducted by two mechanisms: (I) long range mechanisms such as rheotaxis or thermotaxis, and (II) short range mechanisms like chemotaxis. (A) Once spermatozoa become capacitated in the lower region of the oviduct (isthmus) they are rendered a hyperactivated movement of the flagellum, a higher sensitivity to temperature gradient, and a partial loose of the ability to bind oviductal epithelial cell; (B) hyperactivated movement is essential to counteract the flow of the oviduct that, in time, helps spermatozoa to redirect their way and force them to swim straight; (C) in the upper region of the oviduct (ampulla), certain chemical compounds produced by the cumulus and the oocyte itself guide spermatozoa towards their final destination. (Illustration by Carlos Agustín Alonso, 2017).

As in sperm chemotaxis, only capacitated spermatozoa are thermotactically responsive (9). Additionally, in chemotaxis and thermotaxis, spermatozoa swim up the gradient by modulating the frequency of turns and hyperactivation events, essentially in the direction of the gradient (11,12).

On the other hand, Martínez-López (17) found that mouse sperm possess TRPM8 channel, which is sensible to temperature changes and might be involved in thermotaxis. In addition, TRPM8 may influence the acrosome reaction.

The work of De Toni and collaborators (18), is focused on the study of TRPV1 as a molecular modulator of thermotaxis in human spermatozoa. Transient Receptor Potential Cation Channel or Vanilloid Receptor 1 (TRPV1) is a ligand-gated, nonselective cationic channel that is activated by molecules derived from plants, such as capsaicin, and also by stimuli like heat or protons (19). It has been reported that anandamide (AEA), an endocannabinoid synthesized by sperm and oviductal cells, activates TRPV1 and the ligand-receptor interaction occurs through a cytosolic binding site triggering an increase of intracellular Ca+ concentration and/or activation of protein kinases (20). TRPV1 is expressed in mammalian spermatozoa and its activation is involved in the regulation of sperm oviduct interaction, sperm capacitation and acrosome reaction (21-23). On the other hand, sperm release from the oviductal reservoir depends on Ca+ influx by activation of cannabinoid type 1 receptor and TRPV1 by AEA (22).

The study of De Toni shows the involvement of TRPV1 in thermotaxis through the evaluation of the sperm migration toward a temperature gradient that was reduced by the addition of selective antagonists of TRPV1.

On the other hand, this work demonstrates sperm migration toward a gradient of capsaicin, an active component of chili peppers and a selective agonist of TRPV1, in a concentration dependent manner. This suggests that TRPV1 might be involved in the chemotaxis mechanism. Interestingly, cell migration by thermotaxis or capsaicin gradient is able to select spermatozoa with higher expression of TRPV1. In this work, a possible synergistic or additive effect of capsaicin in the presence of a temperature gradient is not shown. This aspect might be interesting to consider for future works.

Recently, it has been demonstrated that the bovine oviductal fluid contains nanomolar concentrations of AEA which fluctuate during the estrous cycle, with highest levels detected during the peri-ovulatory period (24). In addition, several works support the evidence that spermatozoa are normally exposed to this lipid mediator within the reproductive tract (20). Therefore, the presence of this endocannabinoid in follicular fluids at ovulation, suggests that the mature follicle may contribute to oviductal AEA levels to create an endocannabinoid gradient conducive to the regulation of sperm function. In this sense, AEA (as natural agonist), might mimic the migration effects of capsaicin involving TRPV1 activation, supporting the observations reported by De Toni et al.

It has to be taken into account that the number of stimuli inside the oviduct as well as the responsive mechanisms to gradients, might be greater than the ones studied in this work, and therefore, a partial reversion with the antagonists used is of great value to the understanding of this process.

The study of the molecular bases of thermotaxis could contribute not only to the knowledge of this physiological process but also to the development of advanced therapeutic strategies for treating male infertility. In this sense, recently it has been reported that different thermotaxis response between bull sperm samples may be associated with sperm fertility (15).

The authors thank Carlos Agustin Alonso for his help in Figure 1 design and drawing.