Here we evaluated the prevalence of MET overexpression and explored its efficacy for EGFR-TKIs in EGFR-mutant lung adenocarcinoma patients.

From January 2013 to July 2015, a total of 1,215 patients received EGFR mutation screening at Zhejiang Cancer Hospital. All EGFR mutations were confirmed by ARMS method (Amoy, Xiamen, China). Primary objective was to evaluate the impact of MET overexpression with concurrent EGFR mutation on the efficacy of EGFR-TKIs. And secondary objectives included frequency of concurrent MET overexpression in EGFR-mutant samples, overall survival (OS) and objective response rate (ORR), etc. Inclusion criteria included histologically-confirmed advanced stage, lung adenocarcinoma and a minimal age of 18 years. All EGFR-mutant patients received first-generation EGFR-TKIs. Those dying non-related with lung cancer were excluded. A total of 167 lung adenocarcinoma patients had sufficient samples for immunohistochemistry (IHC) for MET. The present study was approved by the Review Board of Zhejiang Cancer Hospital (IRB-2015-049).

IHC staining for MET overexpression was performed on 5 µm-thick FFPE tissue samples. Monoclonal MET primary antibody (Cell Signaling Technology, Danvers, MA,USA) was diluted with a factor of 1:500. Intensity score was defined as: 0= negative, 1= weak, 2= moderate or 3= strong positive. And the fraction of positive cells per intensity was estimated as a percentage. Four MET diagnostic subgroups were defined as: 3+ (≥50% of tumor cells stained with strong intensity); 2+ (≥50% of tumor cells with moderate or higher staining but <50% with strong intensity); 1+ (≥50% of tumor cells with weak or higher staining but <50% with moderate or higher intensity); or 0 (no staining or <50% tumor cells with any intensity). MET positivity was defined as a score of 2+ or 3+. IHC findings were analyzed by two independent specialists. IHC assay of MET overexpression was performed as previously described (15).

Tumor evaluations were performed every 8 weeks or earlier if there were significant signs of progression. And objective tumor responses were evaluated according to the scheme of Response Evaluation Criteria in Solid Tumors (RECIST 1.1).

Survival analysis was conducted with Kaplan-Meier method and intra-group differences were compared by log-rank test. Progression-free survival (PFS) of EGFR-TKI was defined as time from initiating EGFR-TKI therapy to documented progression or mortality from any cause. Statistical analysis was performed with SPSS 16 software (Chicago, IL, USA). P<0.05 was judged as statistical significance. And the last follow-up time was February 1, 2016.

Among 167 EGFR-mutant patients, there were 95 males and 72 females with a median age of 59 years. All patients were conformed as having the histology of adenocarcinoma. There were 76 prior or current smokers and 91 non-smokers. Their clinical characteristics were summarized in Table 1. 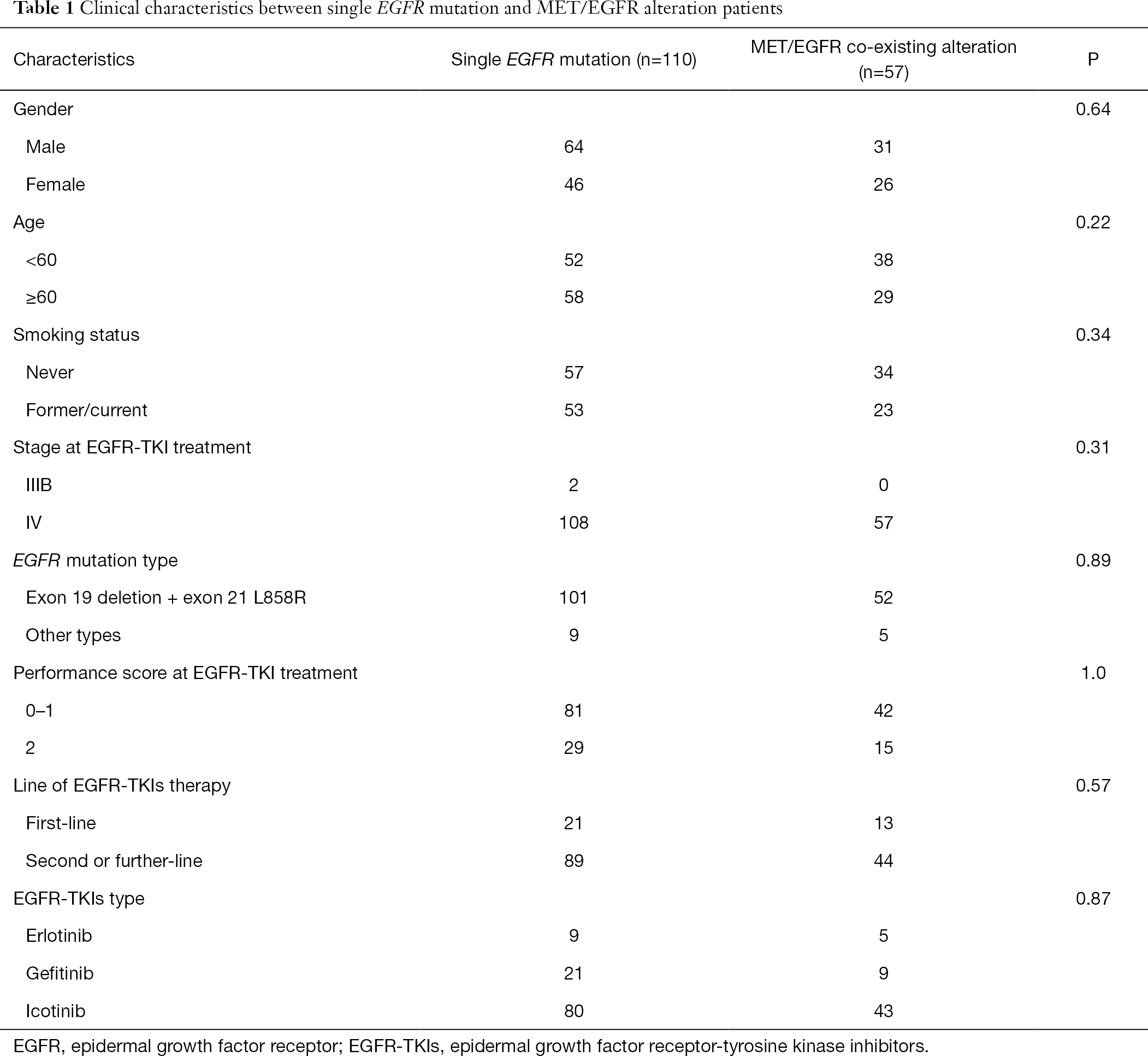 Among them, the mutations included deletion in exon 19 (n=81), L858R in exon 21 (n=72) and others (n=14). Fifty-seven samples were identified as MET positivity, including MET (3+) (n=19) and MET (2+) (n=38). No association existed between age, smoking, gender or EGFR mutation type. The clinical characteristics were compared between MET-positive and negative patients (Table 1). 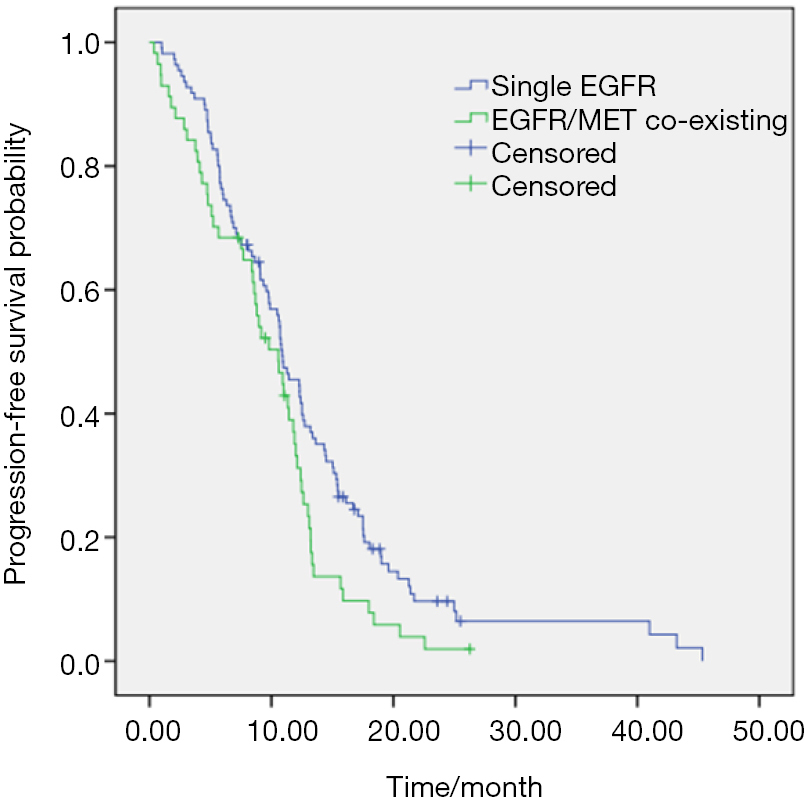 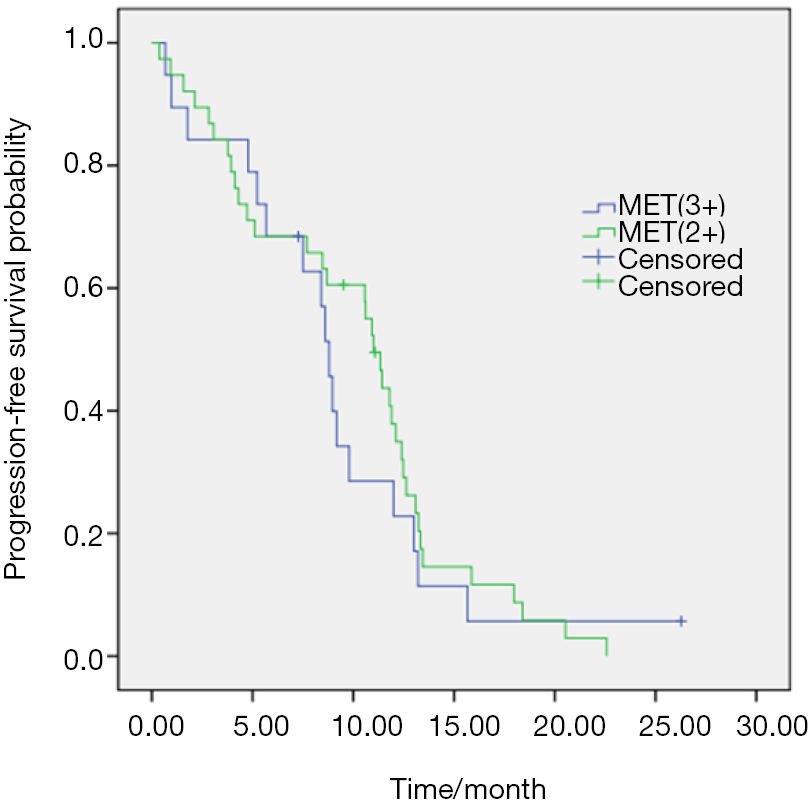 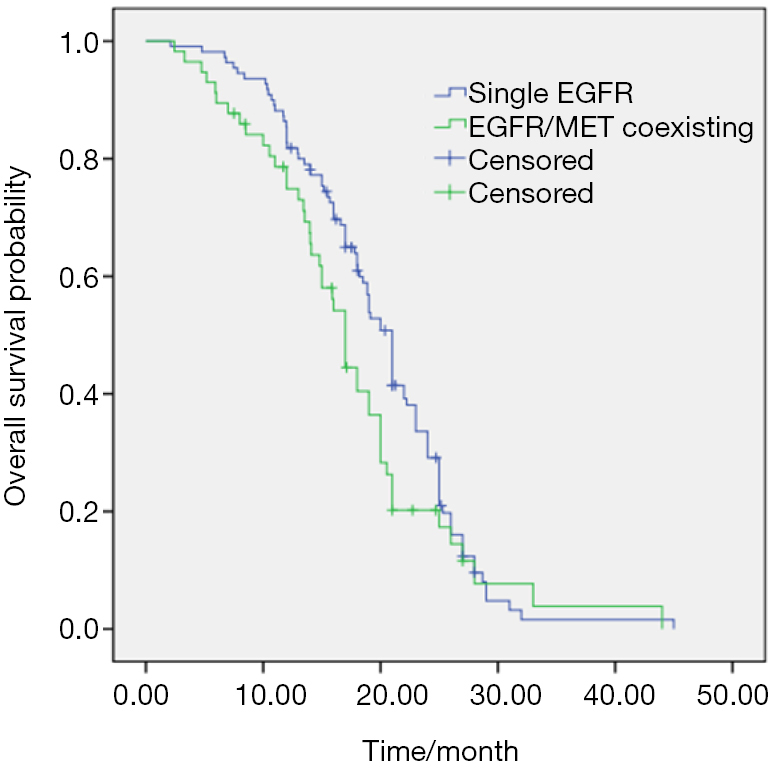 With regards to MET pathway, previous studies focused mostly on amplification and exon mutation since both amplification and exon mutation might be targeted by inhibitors (15,16). As demonstrated by previous studies, the frequency of MET amplification was different between EGFR-TKI-naïve and EGFR-TKI-resistant NSCLC patients. The frequency of MET amplification was 2–3% in EGFR-TKI-naïve samples versus 5–20% in EGFR-TKI-resistant counterparts. As reported in the literature, the frequency of MET overexpression ranged from 20% to 50% (11,17). Antibodies, IHC techniques and evaluation criteria for MET positivity might contribute to frequency discrepancy between different studies (11). Furthermore cut-off values for high MET overexpression might also yield divergent results. In the present study, intensity score method was employed for evaluations. However, the “gold” method of evaluating MET expression must be validated by future multi-center studies.

With concurrent T790M mutation, MET overexpression induced acquired resistance of EGFR-TKIs. The percentages of MET/T790M (+) patients was 6.8% (14/207) and a combined use of EGFR-TKI and MET inhibitor showed a better efficacy in Gou et al. Study (18). Approximately 60–70% patients harboring EGFR mutation were responsive EGFR-TKIs and the range of PFS was 10 to 13 months (2-4). However, around 20% EGFR-mutant patients did not respond well to EGFR-TKIs. And this phenomenon was termed as primary resistance. Coexisting genetic alterations in cancer-driving genes, i.e., KRAS mutations, PTEN loss and BIM polymorphisms, were associated with primary resistance for EGFR-TKIs (19). The role of MET overexpression is currently ill-defined in non-EGFR-TKIs-treated patients. In the present study, concurrent MET and EGFR mutations could lower the clinical efficacy of EGFR-TKIs. Thus MET overexpression may be a factor of primary resistance.

There are some controversies of MET overexpression as a prognostic factor in NSCLC. As compared with MET (−) counterparts, there was a trend of unfavorable OS for MET (+) patients. Positive MET overexpression was an independent unfavorable prognostic factor in EGFR wild-type patients, but not in EGFR-mutant ones (20). Thus MET overexpression might play diverse roles in NSCLC harboring different gene alternations. In the present study, only a trend of OS difference existed between MET positive and negative patients. It was probably due to an imbalance of treatment options after ineffective EGFR-TKIs. And the prognostic value of MET expression should be further validated with future larger series.

There were some inherent limitations. The most prominent shortfall of our study lied in its small sample size and retrospective nature. Secondly, only one antibody and method were used for evaluating MET overexpression so that biases were inevitable. However, our findings are clinically relevant for EGFR-TKIs.

The coexistence of MET overexpression and EGFR mutation might influence the efficacy of EGFR-TKI. Prior to initiating EGFR-TKIs, the status of MET expression should be routinely detected. And future prospective studies with larger sample sizes are required for elucidating the clinical value of MET overexpression in EGFR-mutant patients.

Ethical Statement: The present study was approved by the Review Board of Zhejiang Cancer Hospital (IRB-2015-049) and written informed consent was obtained from all patients.