Hepatocellular carcinoma (HCC) is the fifth most common cancer and the third most common cause of cancer-related deaths worldwide. All the cases (and deaths), 82% are in developing countries and the death rate is the second highest in China because of the high prevalence of chronic hepatitis B virus infection and liver cirrhosis (1,2). HCC usually remains asymptomatic in the early stage. When symptomatic, patients are often at an advanced stage and have lost the opportunity to undergo radical surgery. Although there have been many advances in HCC therapy, such as targeted therapies, liver transplantation, proton therapy, and interventional radiology, the overall patient outcome has not been improved substantially and the 5-year survival rate is 25–39% after surgery (3-8). In addition to the classical histological and molecular markers, the identification of novel HCC targets will enhance our understanding of cancer heterogeneity and facilitate improvement of personalized therapeutic strategies (9). Therefore, it is important to identify a reliable clinical marker for HCC diagnosis and prediction of the clinical outcome.

Long noncoding RNAs (lncRNAs) are novel RNA molecules greater than 200 nucleotides in length that are not translated into proteins. Although these long non-coding transcripts were once considered to be simply transcriptional “noise” or cloning artifacts, recent evidence shows that lncRNAs play important roles in diverse biological processes, such as transcriptional regulation, cell growth, and tumorigenesis (10-14). For example, the overexpression of HOTAIR is associated with poor prognosis in liver (15) and gastrointestinal (16), cancers. A non-protein-coding RNA, UCA1, also increased tumorigenic potential of bladder cancer (17). There is also a relationship between deregulated lncRNAs and HCC (18-20). Unfortunately, the functional role of lncRNAs in HCC remains largely unknown. Recently, a novel lncRNA upstream from the coagulation factor II thrombin receptor (F2R/PAR1) gene, termed NCRUPAR, was identified. NCRUPAR upregulates PAR-1 expression during embryonic growth and might inhibit tumor progression in gastric and colorectal cancer (21-23). However, the clinical and prognostic significance of NCRUPAR expression in HCC has not been reported.

Therefore, this study investigated the expression of NCRUPAR in HCC specimens and adjacent normal tissues and the potential relationship between NCRUPAR expression levels and the clinicopathological factors of patients with HCC. Our data suggest NCRUPAR may be a potential novel biomarker for HCC.

Our cancer center in the Department of Hepato-biliary and Pancreatic Surgery, The First Affiliated Hospital, College of Medicine, Zhejiang University, China, collected 137 samples of HCC tissues compared with paired adjacent non-tumor tissues from 2010 to 2013. Tumor tissues and paired adjacent non-tumorous tissues 5 cm from the edge of the tumor were obtained during surgery. None of the patients received preoperative chemotherapy or radiation therapy. All tissues were preserved in RNA fixer (BioTeke, Beijing, China) at −80 °C until use. The diagnosis of each specimen was confirmed histopathologically. All clinical data were collected by physicians and the researchers were blinded to the clinical data. The study was approved by the Human Research Ethics Committee of The First Affiliated Hospital, College of Medicine, Zhejiang University. Written informed consent was obtained from all subjects.

The expression levels of glyceraldehyde-3-phosphate dehydrogenase (GAPDH) and NCRUPAR were evaluated using real-time qRT-PCR. The primers were as follows: NCRUPAR forward (5'-GAGGCAGTAGAATGGCGTAAACC-3) and reverse (5'-TCTAATGCCCGTCTTTTTGCTC-3); and GAPDH forward (5'-AGAAGGCTGGGGCTCATTTG-3) and reverse (5'-AGGGGCCATCCACAGTCTTC-3) (23). The cDNAs were amplified using an Applied Biosystems 7500-fast PCR machine; the reaction was finished according to the PCR kit instructions. Denaturation was at 94 °C for 5 min and followed by 40 cycles of 95 °C for 30 s, 58 °C for 30 s, and 72 °C for 20s. All experiments were conducted three times and the average was determined. The formula 2−ΔΔCt was used to calculate the differential gene expression (23).

Six HCC cell lines (HepG2, HCCLM3, HUH7, MHCC97H, SK-Hep1 and Hep3B) and one normal liver cell line (QSG-7701), all of which are maintained at our institution, were used in this study. All cells were maintained in a humidified atmosphere containing 5% CO2 at 37 °C and were passaged using standard cell culture techniques.

Expression of NCRUPAR in HCC cell lines and tissues 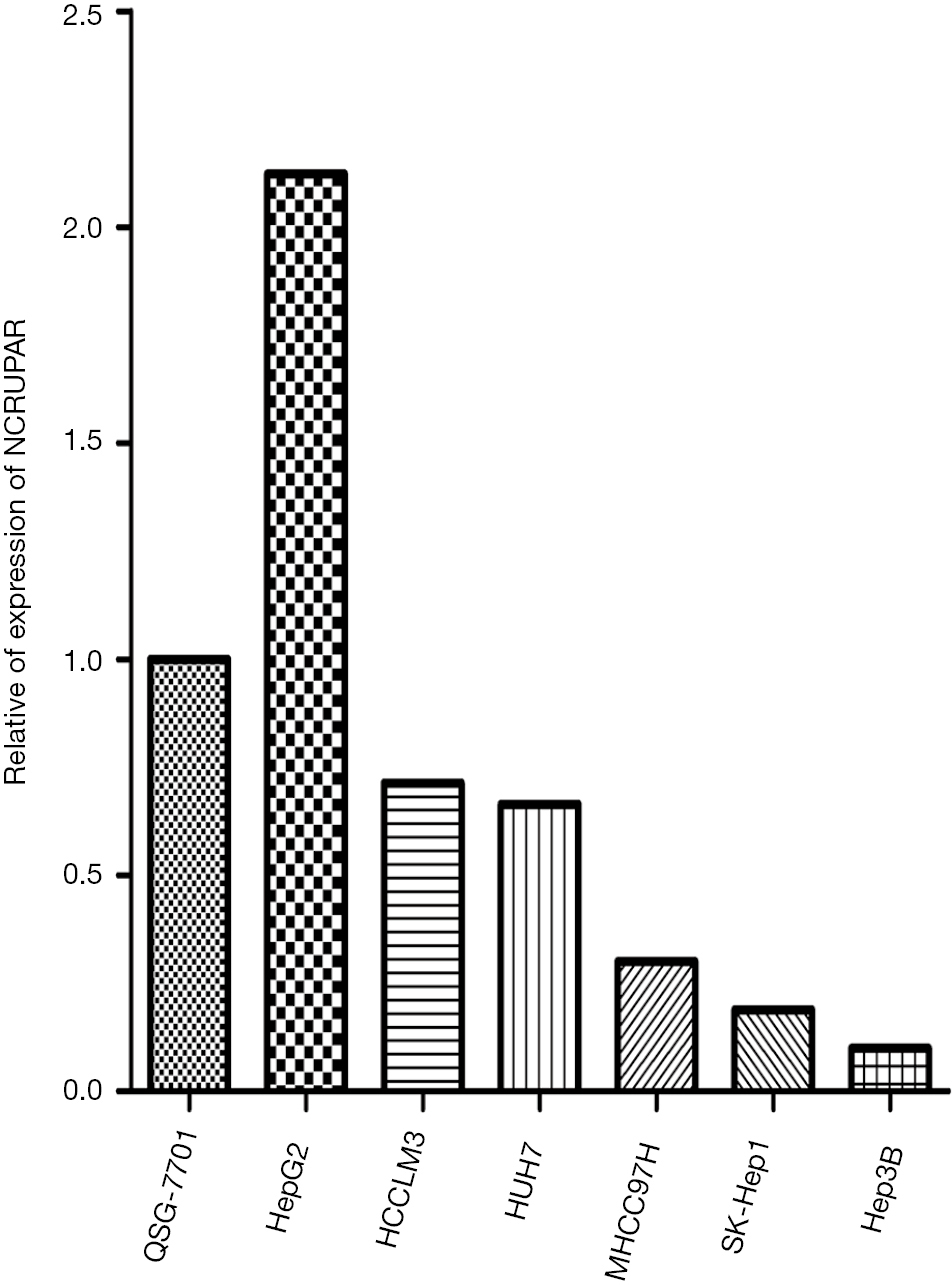 Figure 1 In all 137 tissue pairs, the expression of NCRUPAR is downregulated significantly in tumors compared to adjacent non-cancerous tissues. 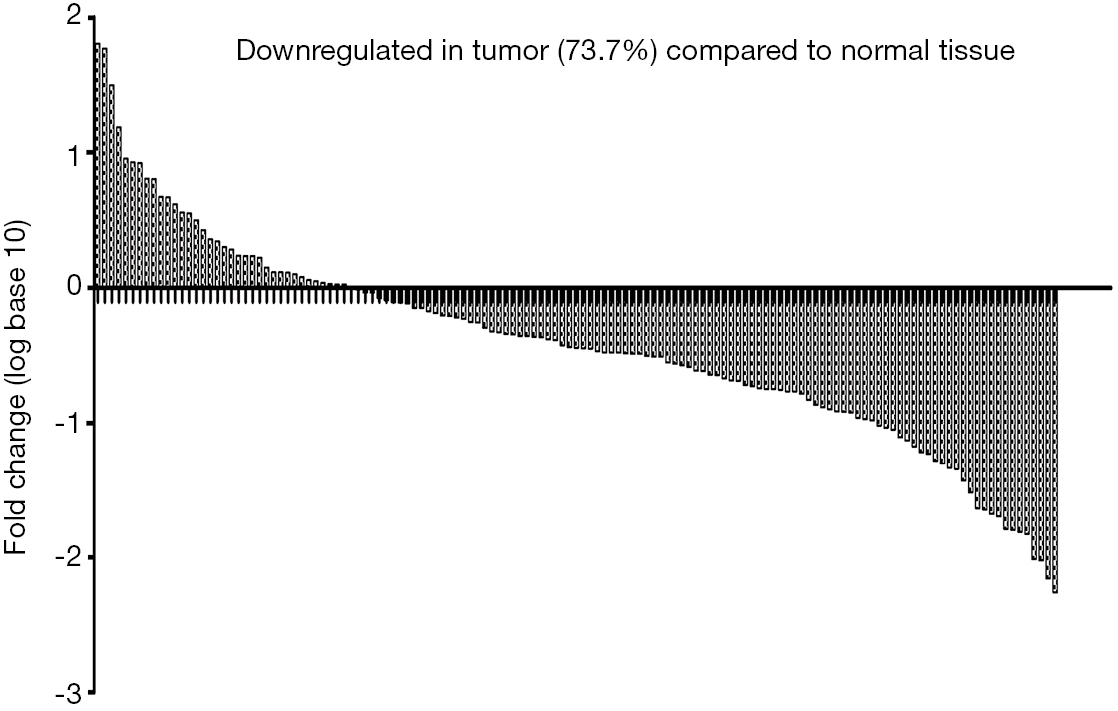 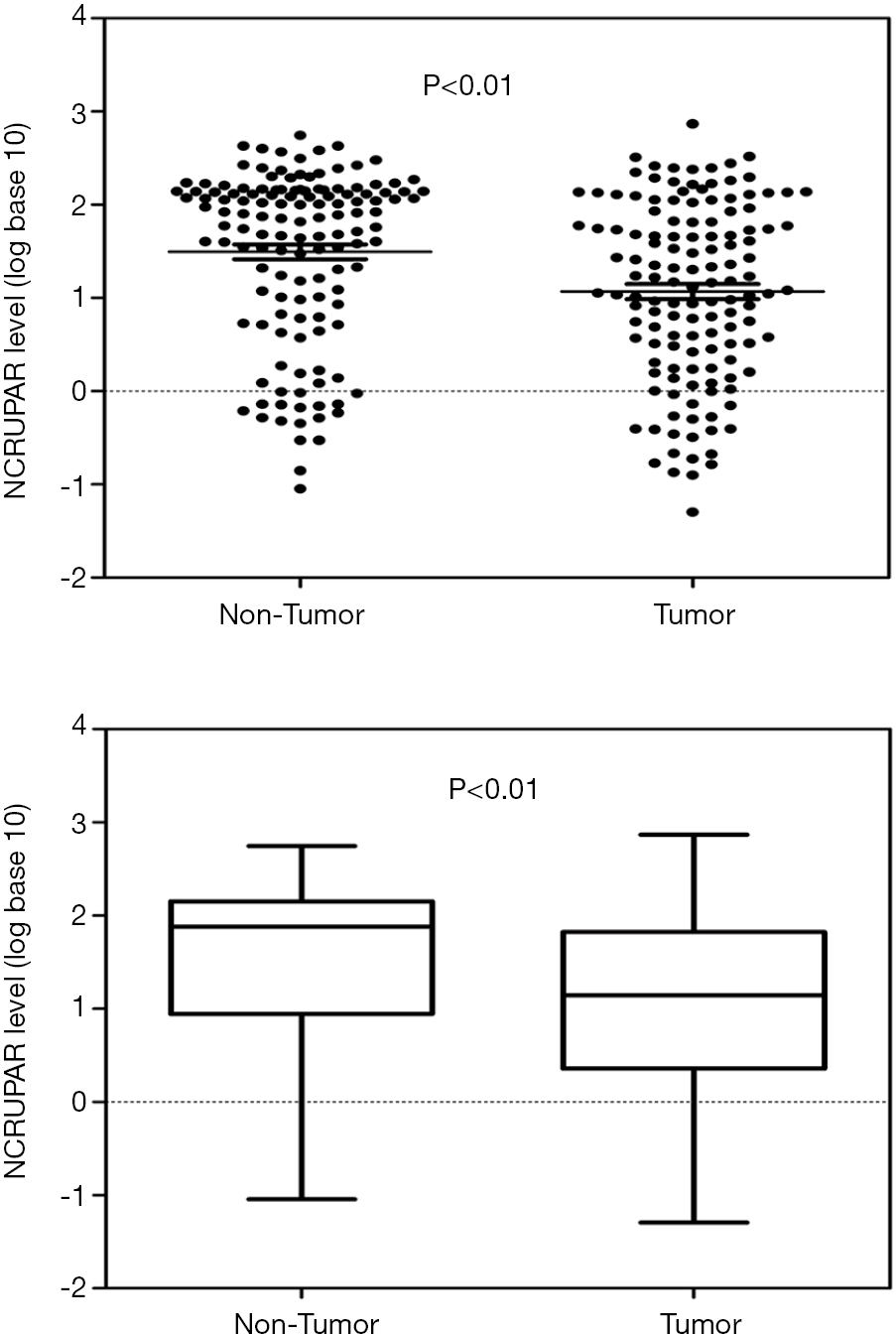 Relationship between NCRUPAR expression and the clinicopathological features of HCC

The relationship with the clinical characteristics was analyzed and the results are shown in Table 1. The NCRUPAR level was associated with cancer distal metastasis (P=0.046), portal vein tumor thrombus (P=0.046) and histopathological grade (P=0.006) However, there was no significant correlation between NCRUPAR expression and other clinicopathological features, such as age, gender, tumor diameter, hepatitis B, liver cirrhosis, clinical stage, or number of tumors and so on. 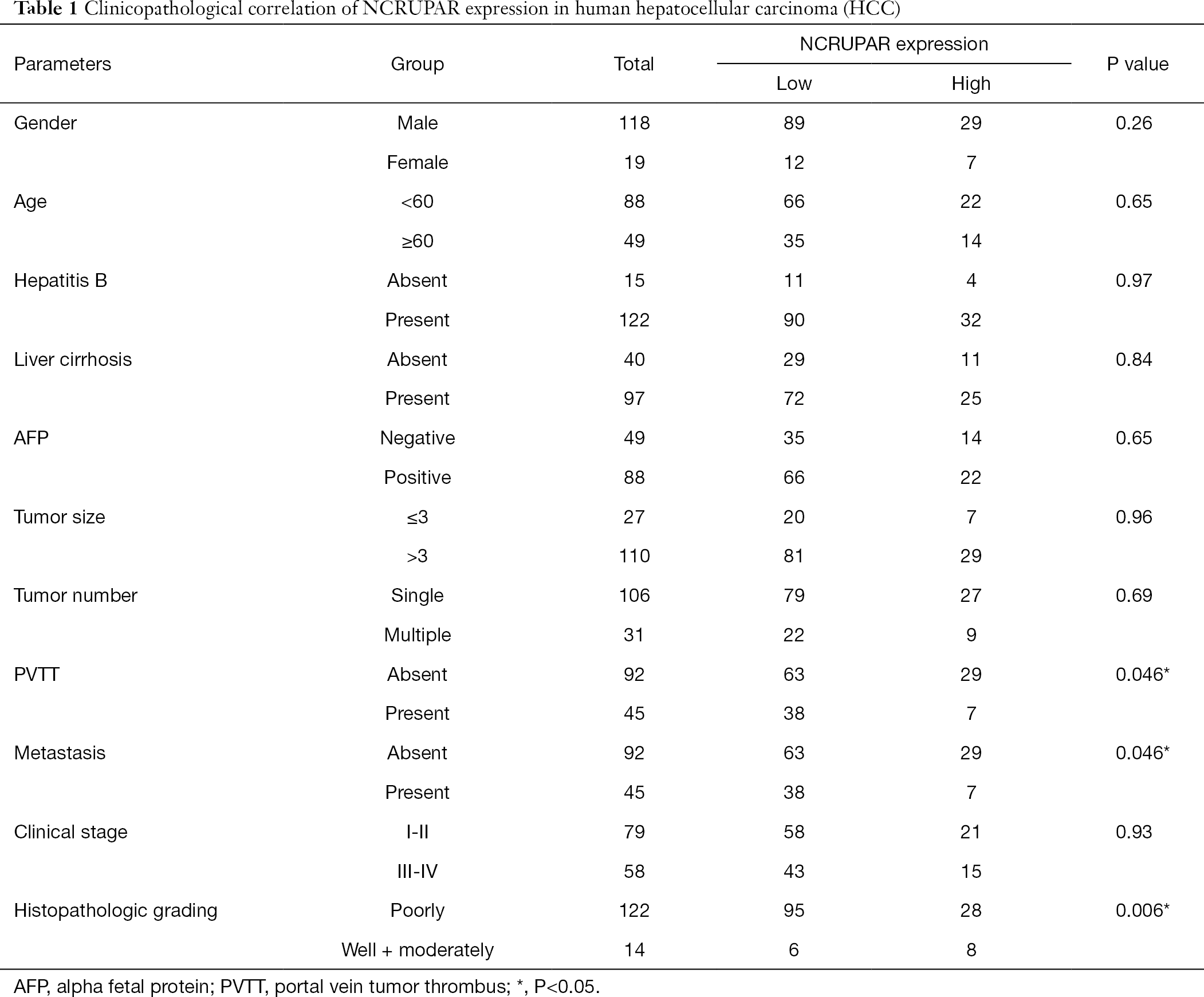 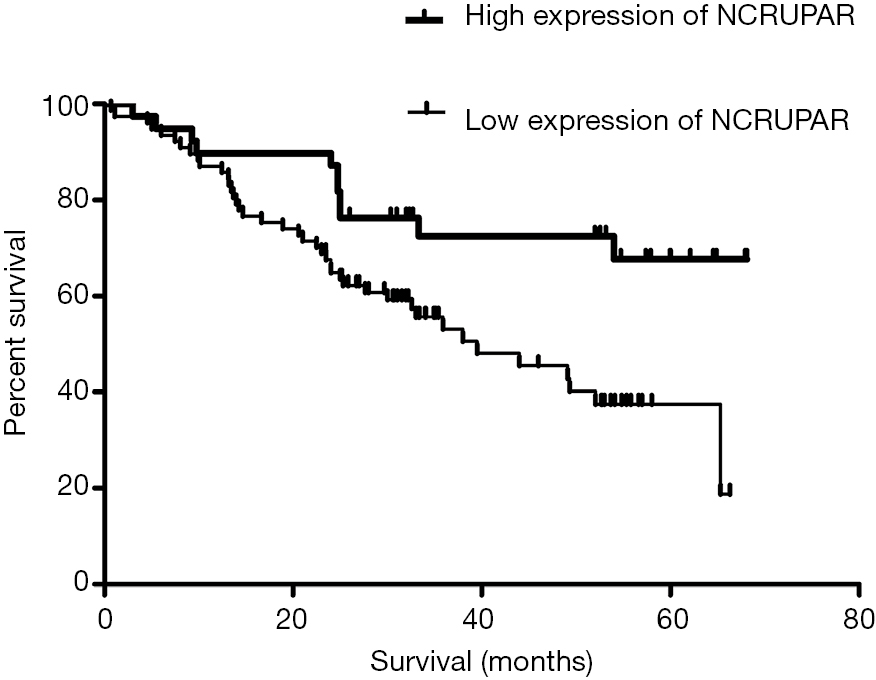 The conventional view of gene regulation in biology has centered on protein-coding genes via the central dogma DNA → mRNA → protein. Although initially thought to be spurious transcriptional noise, the discovery of thousands of long non-coding RNAs (lncRNAs) has changed our view of the complexity of mammalian genomes and transcriptomes and recent evidence suggests that the proverbial ‘dark matter’ of the genome has major roles in cellular development, differentiation, and metabolism (10,12,13,24). Furthermore, accumulating reports of misregulated lncRNA expression across numerous cancer types suggest that aberrant lncRNA expression is a major contributor to tumorigenesis (12). NCRUPAR is a newly discovered long noncoding RNA molecule. Long Liu et al. demonstrated that NCRUPAR was significantly related to lymph node metastasis, distant metastasis, Duck’s stage, differentiation, and TNM stage in colorectal and gastric cancer (22,23).

In this study, we also discovered that the NCRUPAR expression level in five HCC cell lines, HCCLM3, HUH7, MHCC97H, SK-Hep1 and Hep3B, was significantly downregulated compared with a normal liver cell line QSG-7701 (Figure 1). Furthermore, it was downregulated in 73.7% of HCC tissues compared with the paired adjacent normal tissues (Figure 2). The Kaplan-Meier curve analysis showed that NCRUPAR expression were significantly related to overall survival of HCC patients (Figure 4). In summary, these findings imply that NCRUPAR may also acts as a tumor-suppressor lncRNA, which could affect cells phenotypically by promoting tumor-suppressor pathways, and when their function is compromised, cells are prone to develop cancer. In support of this notion, a few new studies have elucidated several examples of ‘tumor-suppressor lncRNAs’, such as LincRNA-p21, GAS5, and CCND1 (25,26).

Hepatocellular carcinoma is a complex, multi-factorial, multi-step disease. The overall survival of patients with HCC is grim because most patients are diagnosed late, when curative treatment is impossible. Clearly, there is a need for novel strategies for the early detection of HCC. Some molecular markers of HCC are important diagnostic and prognostic tools, which can help patient management (24,27,28). However, a clear advantage in the diagnostic use of ncRNA detection versus that of protein-coding RNAs is that in the former the RNA itself is the effector molecule, so its expression levels might be a better indicator of the intrinsic tumor characteristics. It is well known that the poor prognosis and high recurrence rate of HCC are due largely to the high incidence of intrahepatic and extrahepatic metastases (29). There is increasing evidence that lncRNAs play important roles in the invasion and metastasis of HCC (20,30,31). Our results showed that the NCRUPAR expression level was associated with cancer distal metastasis, portal vein tumor thrombus and histopathological grade (Table 1). These close correlations suggest that NCRUPAR is a potential target for gene therapy and could be used as a biomarker for predicting the prognosis of HCC. In addition, NCRUPAR is upstream from the PAR-1 gene and upregulates its expression during embryonic growth (18). However, Long Liu et al. demonstrated that NCRUPAR inhibits gastric and colorectal cancer progression by downregulating PAR-1 (19,20). Kaufmann et al. also demonstrated that the thrombin receptors PAR-1, PAR-3, and PAR-4 are expressed in HCC cell lines and that PAR-1 is involved in regulating hepatoma cell migration (20). To our knowledge, however, no authors have suggested how NCRUPAR regulates the PAR-1 gene in HCC and additional exploratory and validation research is needed to elucidate the functional role of NCRUPAR in HCC.

Our study had several limitations. Further understanding of the molecular mechanisms involving NCRUPAR in human HCC should facilitate the discovery of novel targeted agents and might also lead to the development of new approaches for effective therapy for human HCC. In order to explore the function of the NCRUPAR in vitro, lentivirus encoding the complete NCRUPAR open reading frame (LV-NCRUPAR) and a lentivirus vector encoding green fluorescent protein (LV-GFP), which was used as the control, were constructed, we detect the functional role of NCRUPAR in HCC cell lines, but the results is not well. The main mechanisms of lncRNA function, you know, such as HOTAIR, may serve as a scaffolding base for the coordination of epigenetic or histone-modifying complexes, including Polycomb repressive complexes and LSD1/CoREST and so on. When we constructed the lentivirus that encoding the complete lncRNAs open reading frame, the structures of the lncRNAs that has expressed by the artificially synthesized lentivirus may not be the original three-dimensional structure that exists in the cell and the post-transcriptional modification is also different. That is why most of researchers are only focus on the lncRNAs that highly expressed in the tumors, they can knock down or knock out the lncRNAs and not to overexpress the lncRNAs to research the function and mechanism of the lncRNAs. This can also explain why we cannot get the positive results between LV-NCRUPAR and LV-GFP in the HCC cell lines. Although many important questions remain unanswered, lncRNAs are shedding new light on our understanding of these cancer pathways; the potential roles of lncRNAs in biology and medicine could be tremendous; they might be useful as novel diagnostic and prognostic markers for various cancers. In addition, they might have therapeutic applications, although it will require many years of intensive research before they can be fully deciphered and applied. As more examples of regulation by lncRNA are uncovered, one might predict that the large transcripts will eventually rival small RNAs and proteins in their versatility as regulators of genetic information.

Our results indicated that NCRUPAR was downregulated in HCC and it could function as a potential biomarker in the diagnosis and estimation of the prognosis of HCC.

Ethical Statement: The study was approved by the Human Research Ethics Committee of The First Affiliated Hospital, College of Medicine, Zhejiang University. Written informed consent was obtained from all subjects.