Cirrhosis of liver is an end stage of chronic liver disease whose prevalence is on the rise due mostly to viral hepatitis (particularly Hepatitis B & C), non-alcoholic fatty liver disease (NAFLD) and alcoholism (1). Hepatocellular carcinoma (HCC) is the most common primary cancer of the liver and the fifth most prevalent cancer worldwide, with rising prevalence seen in the United States (2). The major risk factor for the development of HCC is cirrhosis of the liver, with cirrhosis found in more than 80–90% of liver cancer patients (2). The American Association for Study of Liver Disease (AASLD) has recommended surveillance of patients with cirrhosis for HCC using ultrasound (US) of abdomen every 6-month interval as a cost-effective intervention to reduce mortality and improve survival. However, it is widely known that patients with cirrhosis are not being routinely screened, and surveillance rates range around 30–40% (3-5), though rates as low as 1.7–17.4% are seen when surveillance is defined as any imaging of abdomen within 6 months (6-10)

HCC, which is the most prevalent of liver cancers, has an increased incidence in all races in the birth cohort of persons born between 1945–1965 due to higher rates of hepatitis C in this group. The strongest predictor of HCC incidence is hepatitis C virus (HCV) infection, followed by hepatitis B virus (HBV) infection and alcohol related liver disease (11). HCC incidence has increased 2.5-fold, and HCC mortality has tripled since 2001 (12). The 5-year cumulative risk for development of HCC is 5–30% in patients with cirrhosis (2). The key to survival of HCC is early detection. HCC detected early can achieve 5-year survival rates near 50–70% with resection and transplantation vs. 3-year survival of 8% if there are later signs of disease (13).

In a large robust randomized controlled study HCC surveillance (n=18,816) showed clear benefits, the patients in the surveillance arm had a 37% decrease in mortality despite less than optimal adherence to surveillance recommendations (14). Surveillance for HCC is the recommendation by all the major international liver associations including the AASLD in the United States (15), the Asian Pacific Association for the Study of Liver Disease (16), and the European Association for the Study of Liver (17). Most importantly, surveillance of HCC in high risk patients, including patients with cirrhosis, remains the standard of care.

Ultimately, the evaluation of the factors that are associated with surveillance of HCC in patients with cirrhosis is essential to clinical practice. The purpose of this integrative review is to evaluate the current state of the literature and to determine the factors associated with the surveillance of HCC in patients with cirrhosis, in order to understand the underlying variables and design interventions that influence surveillance behavior.

An exhaustive review of the literature was completed to evaluate the factors related to lower rate of HCC surveillance in cirrhotic patients, to better understand the causes. Four electronic databases were searched, CINHAL, SCOPUS, Cochrane and PubMed using search terms cirrhosis, adherence, compliance, HCC, screening and surveillance restricted to articles from the United States since 2005, when the AASLD guidelines were formalized (15). Studies looking at patients from outside of the United States were excluded, as the unique characteristics of the United States insurance markets are not applicable to other countries and insurance and co-pay issues may influence surveillance behaviors. Only studies that considered causes of HCC surveillance in adults with cirrhosis in the outpatient setting were included. Excluded articles were those studies that discussed prevalence without examining cause, guidelines, inpatient studies, studies with patients less than 18 years old, or studies that looked at adherence to variceal surveillance guidelines, alfa-fetoprotein (AFP) surveillance alone, medication or diet adherence. Studies that evaluated patients after 2005 were included, as that is when the first AASLD guidelines recommending surveillance were initially issued (15), and the presence of guidelines should positively influence surveillance behavior. Of note, AASLD surveillance guidelines were established in 2005, recommending HCC surveillance with abdominal US every 6–12 months and subsequently changed in 2011, to recommend abdominal US for HCC surveillance every 6-month interval.

The initial database search identified 3,134 articles (Figure 1). After adjusting for duplicates, eliminating those studies that did not meet inclusion criteria, 21 articles remained. Hand searching references found an additional 7 articles, and all 28 articles were further screened. Seven studies were eliminated for not meeting inclusion criteria, including two studies that were published after 2005, but whose dates of study were before 2005 and thus did not meet inclusion criteria. The 15 publications that remained were evaluated for content, quality and relevance to clinical question. The research design, sample characteristics and factors related to HCC surveillance in patients with cirrhosis were extracted. Secondary evaluation also was done to examine the rate of HCC surveillance in the studies (see Table S1). 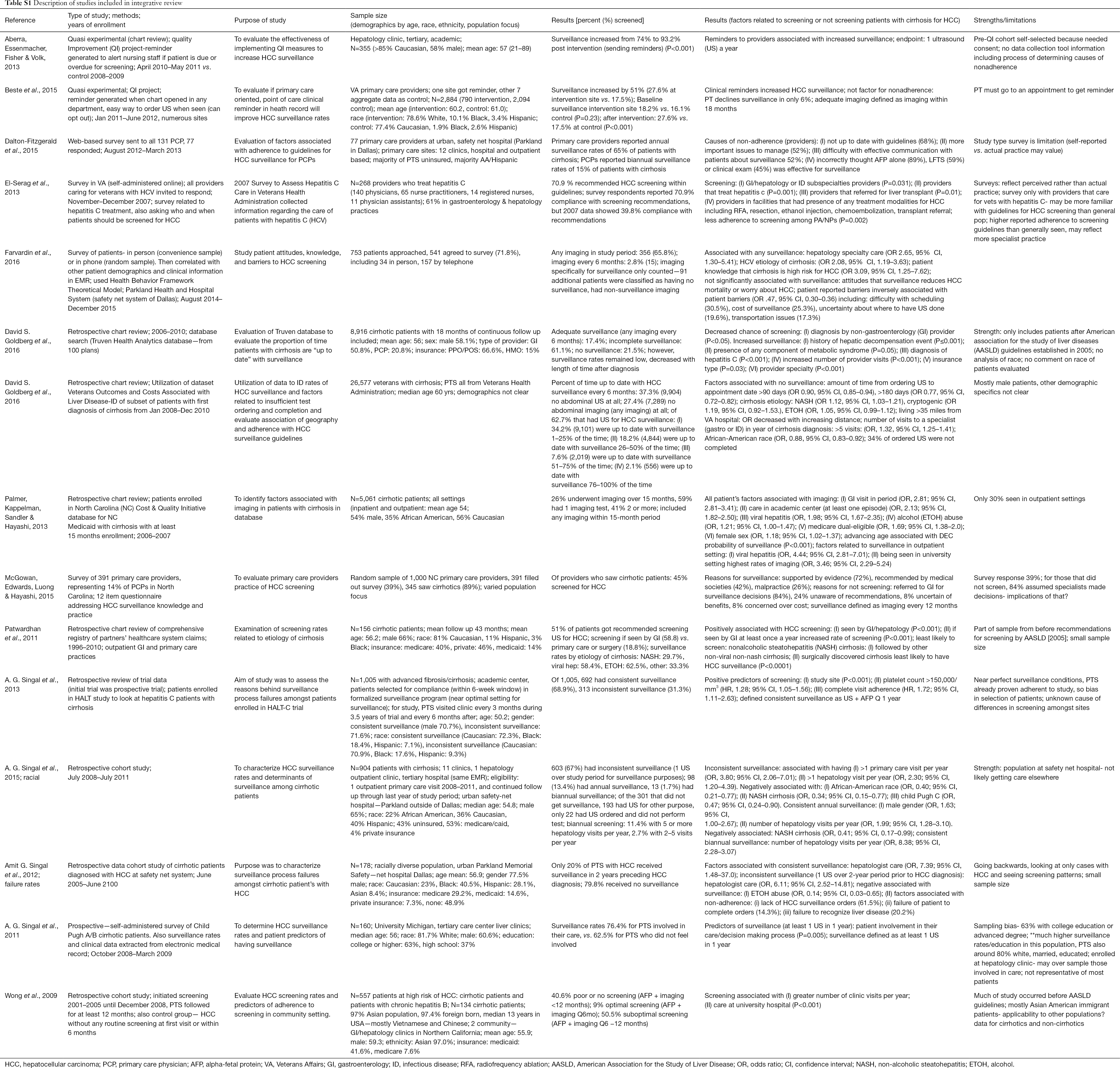 Of the 15 studies selected, 4 were provider surveys, 2 were patient surveys, and 9 were retrospective chart reviews, of which 2 were quality improvement projects. Definitions of surveillance varied among studies, from the current standard of an US of abdomen every 6-month interval, to any imaging done over a patient’s lifetime. Several factors were associated with surveillance for HCC, with provider type, setting of care and number of visits to a specialist provider being the finding most often established. Additional factors were etiology of liver disease, patient and provider related factors. Interventions to improve surveillance behaviors were also discussed. These are reported individually below.

Rates of surveillance for HCC

Rates of surveillance for HCC using any imaging modality completed within a 12-month period were higher with a much wider range, with rates 13.4% to 76.4% (8-10,19-21). Rates of annual surveillance were slightly higher in patients enrolled in a clinical trial with 68.9% of patients having yearly US, and 31.3% having inconsistent adherence; of note, these patients were enrolled in a clinical trial with near perfect surveillance conditions, as patients were selected for compliance (21). Rates were also higher when the population was highly educated (63% with college degree or higher), with surveillance rates up to 76.4%. An outlier study which was a quality improvement program found 74% adherence to annual surveillance which increased to 93.2% post intervention (a reminder system for providers) (22). It is unclear how they achieved that rate, while others fell in the range below 80%. When these three studies are removed, the range falls between 13.4–51% of patients with annual surveillance (8-10,19)

Effect of type of provider, setting and visit frequency

Effect of etiology of cirrhosis on adherence

Two studies directly surveyed patients regarding HCC surveillance facilitators and barriers with different populations—one looked at a predominantly Caucasian, well-educated population (20) and another in an urban safety net hospital (18). These surveys revealed that patient knowledge that cirrhosis was a risk factor for HCC was associated with higher HCC surveillance rates in one patient survey (18) and patient involvement in their care and decision making process was associated with increased surveillance, with surveillance rates increasing from 62.5% in patients who were not involved in their care, to 76.4% in patients involved in their care (20). Presence of patient perceived barriers was negatively associated with HCC surveillance (OR, 0.42; 95% CI, 0.25–0.70)—these included difficulty scheduling imaging (30.5%), costs of surveillance test (25.3%), uncertainty about where to get surveillance tests (19.6%) and difficulty with transportation (17.3%) in one study which utilized patient surveys (18).

Specialist care (gastroenterologist or hepatologist) was strongly associated with increased surveillance rates (5,19,24,26), and this is clearly due to an ability to focus on the liver during visits, without ultimate responsibility to other organ systems. An increase in number of visits to a specialist provider is also closely related to increased HCC surveillance (8-10); after acute issues are resolved, more visits allow for preventative care to be emphasized, including ordering of surveillance tests. Primary care management of cirrhosis was also associated with lower surveillance rates (8). In a primary care environment, where the provider is responsible for the care of all organ systems and care coordination, there may not be a specific awareness of the need to screen for HCC at every 6 months, and even when there is this knowledge, it may not be prioritized. Not all geographic locations have easy availability of gastroenterologists or hepatologist, but in areas where there are ample specialists, it is important to refer cirrhotic patients to them for more consistent surveillance and care.

An interesting finding by Singal (9) was that the failure of providers to recognize liver disease is related to lower surveillance behaviors. Failure to recognize cirrhosis is of course, linked to lower rates of surveillance. NASH cirrhosis was the diagnosis least likely to be screened (9,19), and this may be due to the difficulty diagnosing cirrhosis in this population. This points to the need to increase focus on patients with fatty liver, and identify those patients at greatest risk for NASH and cirrhosis and to follow them appropriately. As NASH overtakes viral hepatitis as the leading cause of cirrhosis in patients, this will prove to be more significant an issue moving forward.

The reasons for non-surveillance of HCC in patients are complex and difficult to ascertain. Though this study showed some clear data related to patient and provider characteristics that affect surveillance behavior, there is not a clear target for intervention. The studies included in this review include retrospective chart reviews and surveys, which each have distinct limitations. Retrospective chart review misses unmeasured confounders, and often has missing data such as imaging tests done and not captured. Surveys depend on self-report and are dependent on response rates, which are low in all included studies. In the one study that sought to validate provider reports against actual data, there was a large discrepancy between reported rates of surveillance and actual surveillance tests performed (26). Furthermore, due to the cross-sectional nature of most studies included in this review, there is limited information about surveillance behaviors over time. Finally, and perhaps most importantly, the surveillance rates are generally low across studies and the reason for this was not clearly identified.

The main finding of this study is that specialist care such as gastroenterologist and/or hepatologist, setting of care, and number of visits to a provider has the greatest influence of surveillance behaviors. However, specialty care is limited in many areas and primary care follows patients with cirrhosis in most cases, with only 20–40% of all cirrhotic patients followed by a specialist (4). Therefore, intervention in terms of increasing knowledge of current guidelines at the level of primary care is clearly warranted to improve surveillance rates. One compelling study pointed to the lack of cirrhosis diagnosis a significant risk factor for lack of surveillance, and increased education related to identification of cirrhotic patients should also be emphasized. Furthermore, the role of cost of healthcare as it affects surveillance behaviors has not been fully studied. In the current healthcare environment in the United States where patients often pay high co-pays and deductibles, this may have a role in surveillance behaviors as well, especially as it influences number of visits to a provider, and uptake of specialist care, which are known to influence surveillance behavior. In cases where providers were prompted to order screening by a reminder, rates were higher, pointing to the idea that organizational supports can influence surveillance rates positively. Finally, surveillance of patients with cirrhosis for HCC is low, irrespective of most factors, and a greater understanding of this phenomenon is clearly needed through further focused study.

The findings from the integrative review point to varied patient, provider and organizational factors that influence whether a patient with cirrhosis is screened for HCC or not. Early detection of HCC is important to improve survival in HCC, and surveillance rates are very low across studies. It is important that we continue to address factors that influence surveillance behaviors in providers to improve these rates of surveillance and ultimately, improve survival in patients with cirrhosis.

The authors thank Dr. Patricia Bruckenthal for her help.