Osteosarcoma (OS), which usually happens in the distal femur and proximal tibia, is one of the most common types of malignant bone tumors in children and adults (1-3). It remains the second leading cause in this age group of tumor-related death(1,4,5). Although the advances of understanding in the molecular and pathological mechanisms, the prognosis of OS is still poor due to its highly invasive (4,6). Because of this, more investigates are necessary for the early diagnosis and targeted therapy of OS.

TTK, which is known as the human monopolar spindle 1 (hMps1/TTK), is a dual serine/ threonine and tyrosine protein kinase (7). In various types of malignant tumors it had been reported that TTK plays an important role in the occurrence and development of tumors, such as triple-negative breast cancer (8,9), hepatocellular carcinoma (7,10), pancreatic cancer (11) and so on. But until now no studies about the role of TTK in OS has been reported.

In the present study, we first analyzed the expression level of TTK in OS through GEO dataset and then verified the results by using IHC. The goal of the study was to clarify whether TTK could offer additional help for the early diagnosis or even targeted therapy of OS.

GEO dataset GSE33382 (Genome-wide gene expression analysis of high-grade osteosarcoma), GSE39262 (Human sarcoma cell lines and untransformed cells), GSE21257 (Genome-wide gene expression profiling on pre-chemotherapy biopsies of osteosarcoma patients who developed metastases within 5 yrs and patients who did not develop metastases within 5 yrs), GSE39055 (mRNA profiling and clinical outcomes in human osteosarcoma), was considered to investigate the expression level of TTK in sarcoma tumor tissue and normal tissue, and to investigate the correlation between TTK expression level and the metastasis, recurrence and survival time of OS.

The TMAs was deparaffined with standard pure xylene for 15 minutes three times at room temperature and hydrated in graded alcohols, phosphate buffer saline (PBS) was used to wash the TMA. Antigen retrieval was performed in boiling citrate buffer (PH 6.0) for 15 minutes. Then TMA was cooled down to room temperature in the buffers. After washing TMA in PBS for 5 minutes three times, 0.3% hydrogen peroxide phosphate-citrate buffer was used to block endogenous peroxidase activity for 10 minutes. Rinsed with PBS for 5minutes, TMA was incubated with primary antibody TTK (Sigma-Aldrich; dilution 1:100) for 12 hours at 4 °C. The TMAs were incubated with Poly-HRP Goat anti-rabbit (Maixin. Bio, FuZhou, China) for 30 minutes. Slides were dyed with diaminobenzidine for 5 minutes. Haematoxylin was used to counterstain the nucleus, followed by dehydration and mounted. Images of TMAs were taken using an Olympus BX40 microscope and CC-12 Soft-Imaging System (Olympus, Tokyo, Japan).

TTK showed both cytoplasmic and membrane expression. The TMAs was analyzed and scored for intensity [0-3] and frequency [0-4]. The intensity was scored as grade [0], negative; grade [1], weak intensity; grade [2], moderate intensity; grade [3], strong intensity. The frequency scores were respectively assigned when 0–25%, 26–50%, 51–75% and 76–100% of the tumor cell were positive. To use statistical analysis, TTK protein intensity and frequency were transformed into a composite expression score (CES) utilizing the formula CES = Intensity × Frequency. The range of CES was from 0 to 12. The CES was scored as negative (0), weak positive (1~4), positive (5~8), strong positive (9~12). All the staining scores were analyzed and determined by two experienced pathologist.

The siRNAs molecules used for suppression of MG-63 and U2-OS cells TTK gene and the negative control siRNA (which does not target any sequence present in the MG-63 and U2-OS cell genomes) were all obtained from RiboBio Co Ltd (Guangzhou, China). Transient transfection of siRNA was carried out with the lipofectamine 2000 regent (Invitrogen, Massachusetts, USA) according to the manufacturer’s instructions.

MG-63 and U2-OS cells were seeded at 1×103/well in 96-well plates in RPMI-1640 medium supplemented with 10% FBS. Twenty-four hours later, the cells were transfected, and proliferation was determined at 0, 24, 48 and 72 h post-transfection using the Cell Counting Kit-8 (CCK-8), according to the manufacturer’s instructions.

Cells were harvested by trypsinization and washed twice with cold phosphate-buffered saline (PBS). Then the cells were resuspended in Annexin-V-binding buffer and then stained with 5 µL of Annexin-VFITC solution and 10 µL of propidium-iodide (PI) solution for 15 min in dark at room temperature. Fluorescence was analyzed on a FACSCantoTM II spectrometer (BD Biosciences, San Jose, CA). Cells stained with FITC/PI were counted as apoptotic cells.

All statistical analyses were performed using the Statistical Package for Social Sciences (SPSS) version 20.0 software. The data was downloaded from GEO dataset and the differences were analyzed. TTK expression was compared with t-test. Probability values <0.05 were considered statistically significant.

Figure 1 Analysis of TTK expression in GEO dataset. TTK expression in osteoblast tissue was lower than that in osteosarcoma tissue (A, P<0.05), as well as in their cell lines (B, P<0.05). And the higher expression of TTK was related to recurrence (C, P<0.05), metastasis (D, P<0.05) and short survival period (E, P<0.05). TTK, tyrosine protein kinase.

Analysis of TTK expression in TMAs

Figure 2 Analysis of TTK expression in TMAs. Represent images of IHC staining for TTK protein of TMAs (A, ×40 magnification). A zoomed in ×200 magnification of a small area of the same section in the top right corner was showed the staining details. IHC index (intensity ×% tumor cells) was showed that there was statistically significance between normal tissue and tumor. ***, P<0.001. (B, OS and normal, t=−8.414, P<0.001). OS, osteosarcoma; TTK, tyrosine protein kinase; TMA, tissue microarray.

MG-63 and U2-OS cells stably transfected with TTK siRNA (named as MG-63/siTTK and U2-OS/siTTK). Control MG-63 and U2-OS cells were transfected with nonsense siRNA (named as MG-63/siCTRL and U2-OS/siCTRL). Western blot (Figure 3A,B) revealed that the expression of TTK protein was significantly reduced in MG-63/siTTK and U2-OS/siTTK cells relative to control cells. When TTK was suppressed, the proliferation of MG-63 cells inhibited in a time-dependent manner compared with the control cells (Figure 3C).

Figure 3 TTK expression and cell proliferation in TTK suppressing cell lines. The expression of TTK protein was significantly reduced in TTK suppressing cells relative to control cells (A and B). The proliferation of MG-63/siTTK and U2-OS/siTTK cells inhibited in a time-dependent manner compared with the control MG-63 and U2-OS cells (C). TTK, tyrosine protein kinase; OS, osteosarcoma.

Analysis of the results of transwell chamber assay and flow cytometry

Figure 4 Analysis of the results of transwell chamber assay. In both MG-63/siTTK and U2-OS/siTTK cells the migration was significantly reduced than in MG-63 (A, P<0.05) and U2-OS cells (B, P<0.05). TTK, tyrosine protein kinase; OS, osteosarcoma.

Figure 5 Analysis of the results of flow cytometry. The proportion of apoptotic cells of MG-63/siTTK and U2-OS/siTTK cells was significantly higher than that of MG-63 (A, P<0.05) and U2-OS cells (B, P<0.05). TTK, tyrosine protein kinase; OS, osteosarcoma.

In order to explore the pathway behind, using Western blot we detected the expression of MAPK signal pathway related proteins, including p-ERK, T-ERK, p-P38, T-P38, p-JNK, T-JNK. The results revealed that after TTK suppressing, the expression of these genes were all decreased significantly (Figure 6). 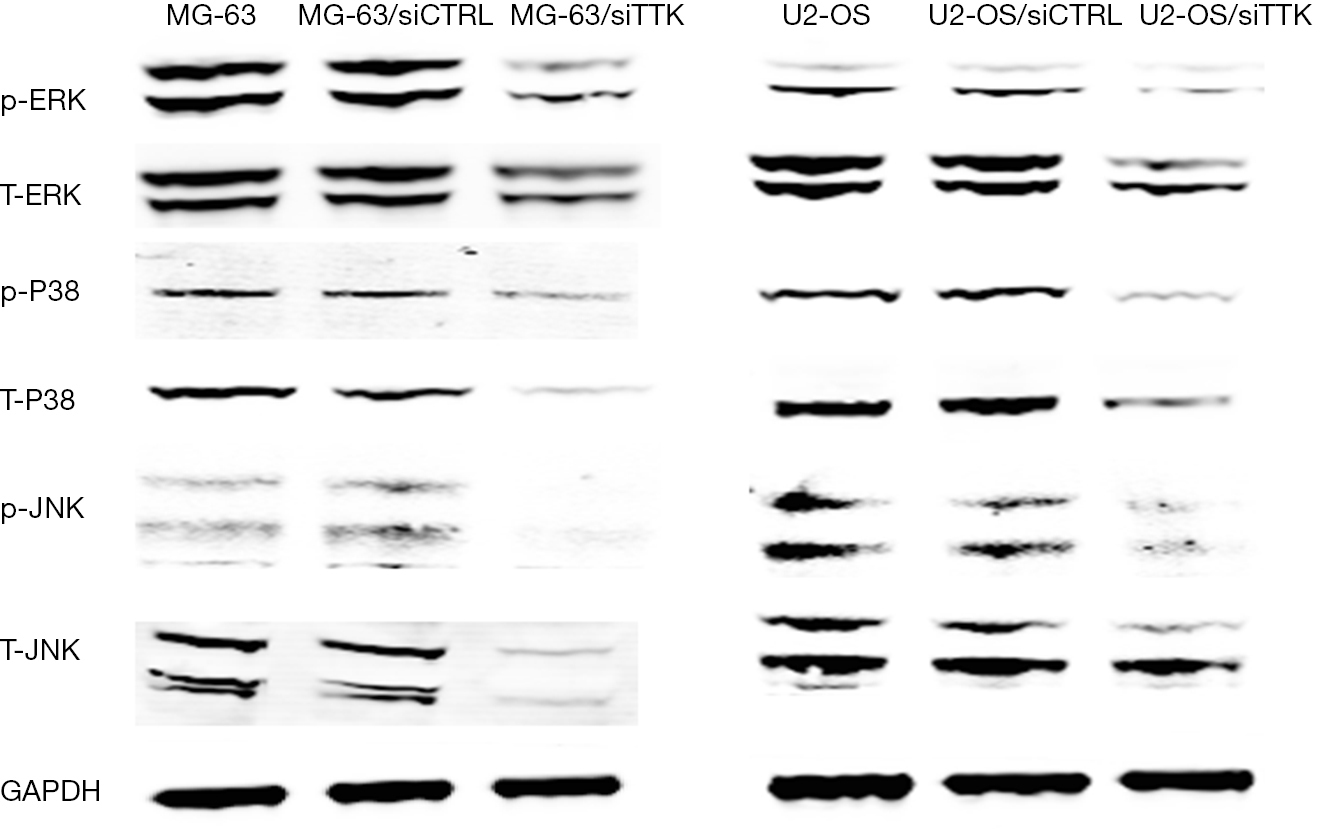 OS has been studied for many years, but still a highly malignant bone tumor that affect children and young adolescents with poor clinical outcomes (12). Recently it has been reported that the 5-year survival rate of OS is approximately 70% owe to the radical surgery and chemotherapy (2,13), but it remains unsatisfactory particularly of the metastasis which usually occur in the lung (12,14-16). About 40–50% of OS occur pulmonary metastasis and the 5-year survival rate is just 28% in such patients (17,18). Because of this, the study was designed to investigate the role of TTK in OS and the goal was to clarify whether TTK could offer additional help in the early diagnosis of OS or even be molecular targeted therapy.

Several studies have revealed that TTK was related to various kinds of human malignant tumors and always showed higher gene expression in tumor tissue than normal tissue, which was correspond with the results we observed in the present study (19). However there has few studies about the relation between OS and TTK which was more be investigated on hepatocellular carcinoma, triple-negative breast cancer or gastric/colorectal cancers (7,8,10,20).

Kaistha et al. (11) investigated the role of TTK in pancreatic cancer cells and reported that TTK function was vital for cell proliferation which was significantly attenuated after TTK knockdown. From it we suspect that high TTK expression could also promote the tumorigenesis of OS.

By using GEO dataset we have analyzed the TTK expression in sarcoma, it showed that TTK expression in sarcoma was significantly higher than normal tissue. And then the result of IHC had verified it. In order to explore the internal mechanism, we conducted cell experiments. The results revealed that in TTK suppressing cells the proliferation and migration were decreased with apoptosis increased. The mechanism may be related to MAPK signal pathway.

In a study about TTK gene in gastric/colorectal cancers, authors analyzed the mutation of TTK and revealed that frameshift mutations of TTK contribute to occurrence and development of tumors with high microsatellite instability (20). The mechanisms may also exist in OS and promote the tumorigenesis.

In addition, a few studies clarified that TTK could be a new approach of molecular targeting treatment in some other tumors, such as liver carcinoma, triple-negative breast cancer and so on. In a report about liver cancer, soft agar colony formation, cell growth and resistance to sorafenib were restrained following TTK knockdown(10). And in the present study, it had been verified by the results of cell experiment.

Furthermore, Maia et al. (9) used a well-defined mouse model represented human triple negative breast cancer and revealed that, the combination of inhibition of the spindle assembly checkpoint kinase TTK with a therapeutic dose of docetaxel could significantly slow tumor growth and increase survival rate. The results of an experiment about orally available Mps1 (TTK) kinase inhibitors also verified the anti-tumor effect (21). However, the internal mechanism should further be investigated in OS.

In a word, the present study revealed that TTK expression in OS was significantly higher than in normal tissue, it may offer additional help for the early diagnosis or even therapeutic target of OS. And the applicability and mechanisms need further investigation.

Ethical Statement: It was not required because what we used were two independent TMAs (Alenabio Biotechnology Co., LTD, Xi’an, China).