Myoepithelial carcinomas are rare malignant tumors arising from myoepithelial cells. It was first described in the salivary glands, and accounts for approximately 1% of all salivary gland tumors (1-5); however, it can also occur in the breast, upper aerodigestive tract, skin, and soft tissue (6-11). Due to its rarity, myoepithelial carcinoma is not well reported and understood, and is usually reported along with myoepithelioma, its more commonly diagnosed benign counterpart. To our knowledge, the largest series for myoepithelial carcinoma published in the English literature included only 40 cases (12), and most literature on myoepithelial carcinoma are individual case reports or small case series (13). There have been no reports with sufficient sample sizes that could enable the analysis of demographics and clinical risk factors which influence its incidence and pattern of occurrence. The lack of such knowledge certainly hampers the understanding of the disease as well as the development of proper diagnostic and treatment techniques. In the present study, therefore, we aimed to determine how age, gender, ethnicity, and the primary tumor location influence the incidence, by analyzing an extensive, population-based sample of both adult and pediatric myoepithelial carcinoma.

The SEER database was used to select all myoepithelial carcinoma cases from 18 regional cancer registries in the U.S. from 1973 through 2012. All cases of myoepithelial carcinoma diagnosis (ICD-O-3 histology codes 8982) were selected from the registry, and the primary tumor locations were determined by site codes ICD-O-3/WHO 2008.

Age-adjusted incidence rates were determined using the SEER*Stat 8.2.1 program. Differences in the incidence rates between the 2 genders, 3 races, and various tumor locations with the highest frequency (tumor location distinguished by site codes ICD-O-3/WHO 2008) were then compared using a 95% confidence interval (CI). A chi-square test was used to investigate the associations between age, gender, and tumor location by SPSS Version 21.

The age-adjusted rates of disease incidence were determined and analyzed using 95% CIs for a combined incidence rate, which was an estimate for the entire population over the past decade, while Joinpoint analyses were performed using the Joinpoint Regression Program (Version 4.2.0.2, NCI, NIH, USA) to ascertain the annual percentage changes and substantial changes in incidence, respectively. 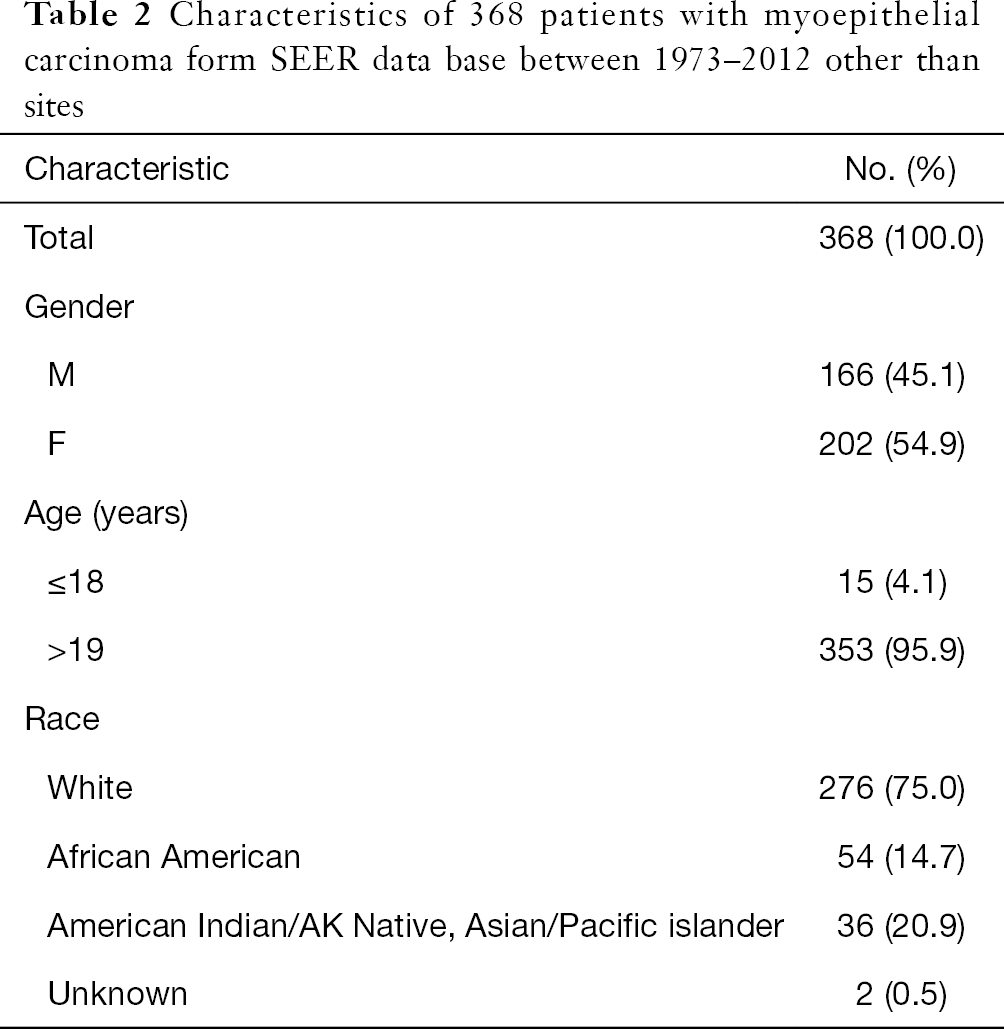 Across all age groups, the oral cavity/pharynx were the most common sites of occurrence, followed by breast, soft tissue (including heart), respiratory system, and skin. Age-adjusted incidences (per 100,000 person-years) based on gender, ethnicity, five tumor locations with the highest frequency distinguished by site codes ICD-O-3/WHO 2008 are detailed in Table 3. The incidence was significantly higher (P<0.001) in oral cavity/pharynx as compared to the other four sites, but did not differ significantly with respect to gender or ethnicity (P=0.302 and P=0.119, respectively). 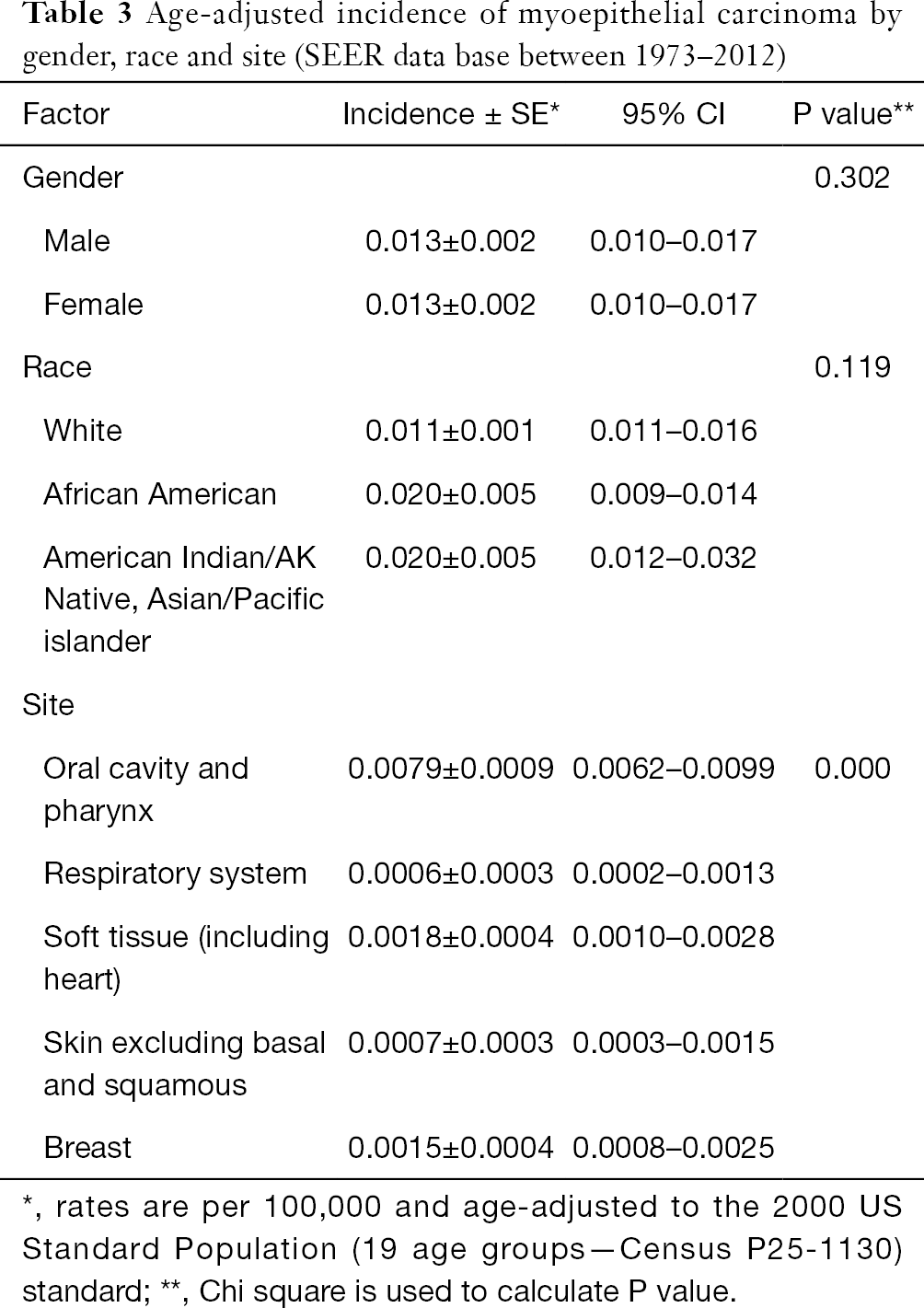 Subsets of 15 children/adolescents and 327 adult myoepithelial carcinoma were classified by site code into oral cavity/pharynx, respiratory system, soft tissue (including heart), breast, and skin in Table 4. Chi-square analysis that compared age versus disease site showed a statistically significant difference in primary location between adult and pediatric/adolescent patients (P<0.0001). Children/adolescents were significantly more likely to develop myoepithelial carcinoma in the soft tissues, including heart, whereas adult more commonly had oral cavity/pharynx. 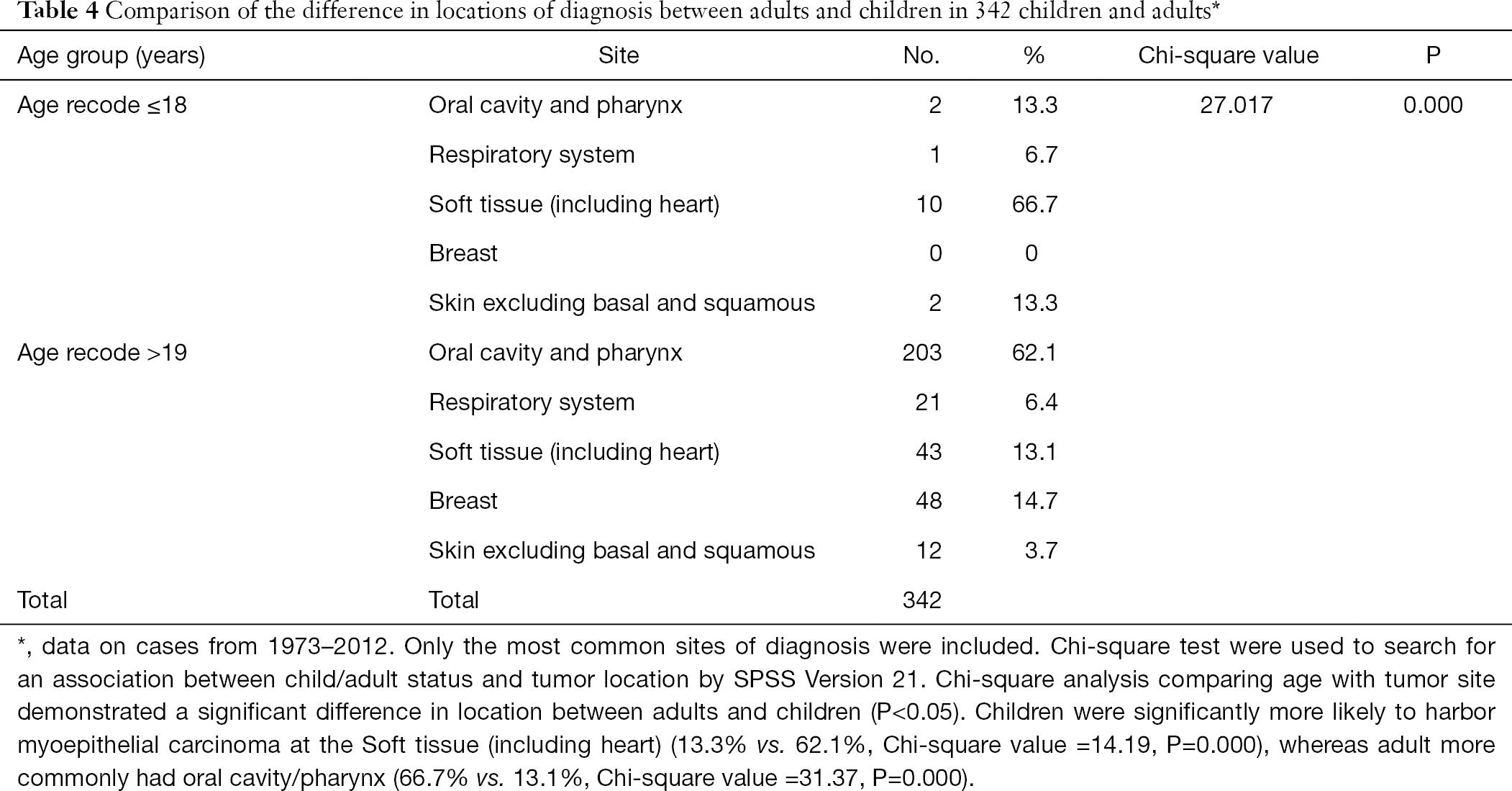 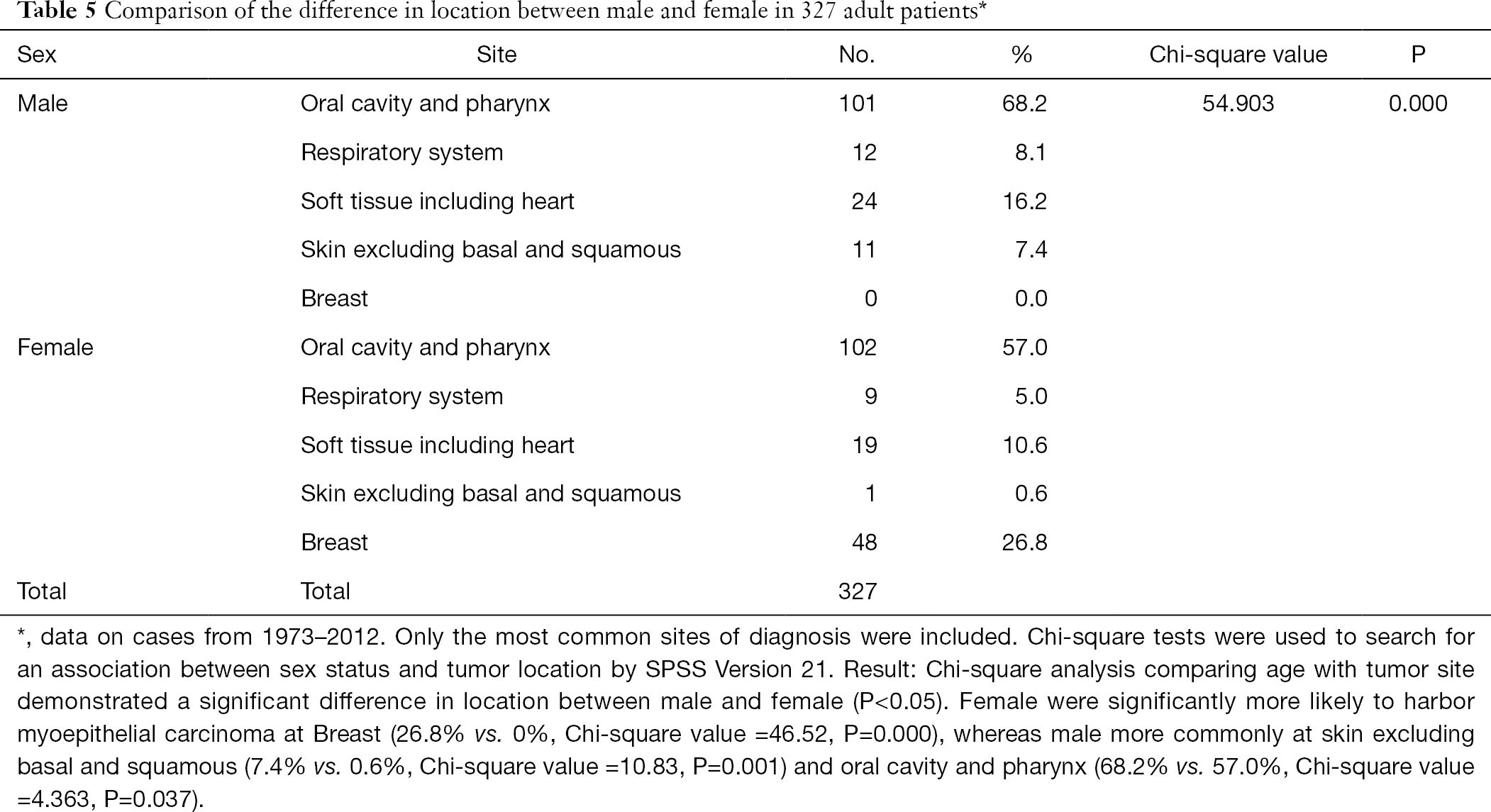 Joinpoint analysis of the entire cohort of patients showed no significant changes in any single year (Figure 2), although we observed a trend of increasing in incidence in both genders. In female patients, the incidence per 100,000 person-years in 2000 and 2012 were 0.007 and 0.025, respectively, and there were no observed percentage changes of statistical significance in annual incidence. However, Joinpoint analysis of male patients showed significant changes in age-adjusted incidence over time. The incidence per 100,000 person-years in 2000 and 2012 were 0.009 vs. 0.058, with an APC (annual percentage change) of 10.8 (P<0.05) in males. 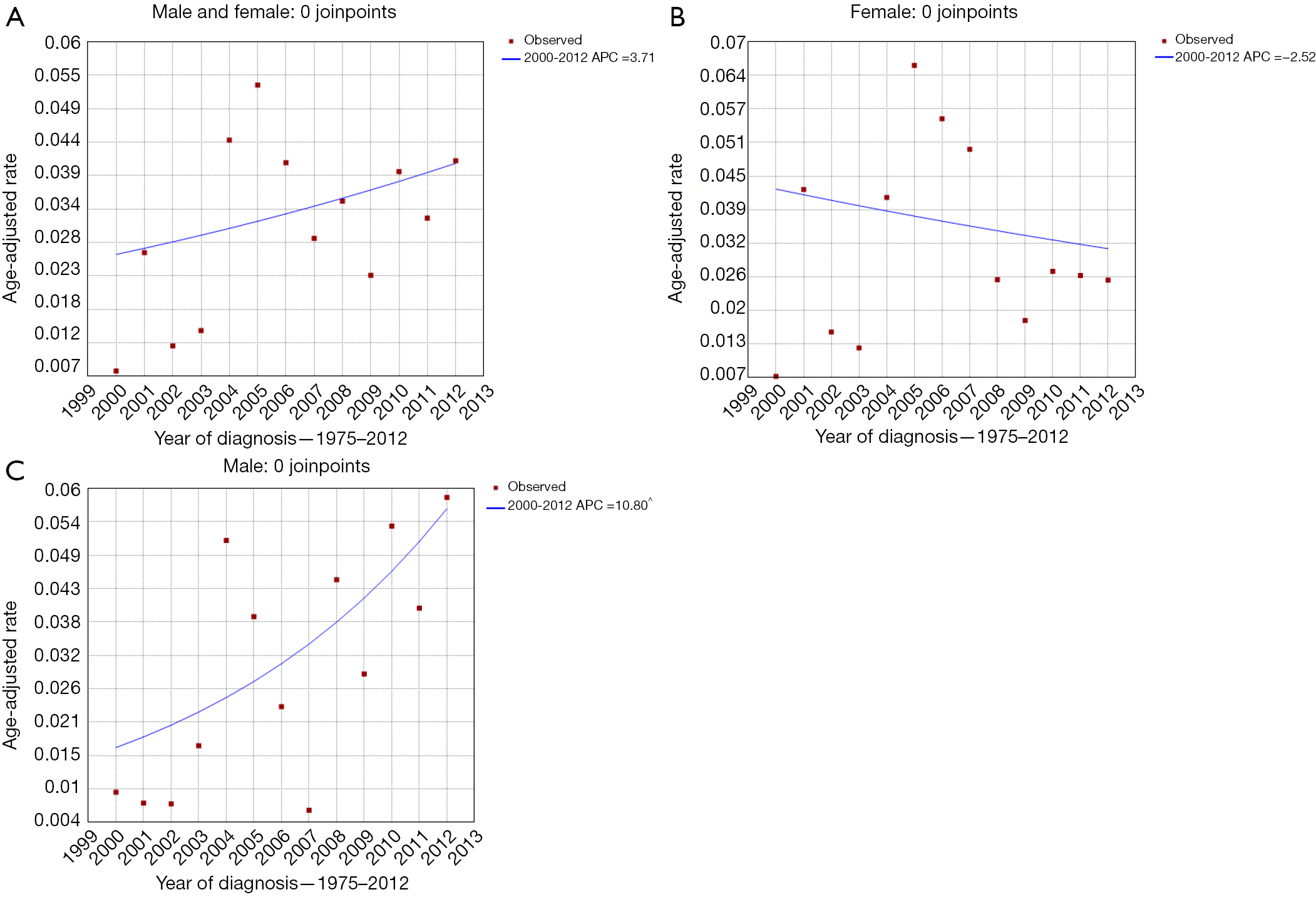 Figure 2 Scatterplots showing age-adjusted incidence trends from 2000 to 2012. There are no significant changes in incidence over time and no sharp changes at any single year among all patients (A) or female(C), but the incidence rises significantly among male (B). APC, annual percentage change.

Myoepithelial cells are typically located between the epithelial cells and the basal lamina of acini and ducts of salivary glands, sweat glands, and breasts. Thus myoepithelial neoplasms are more commonly arise in parotid gland (48–75%), followed by minor salivary glands (reported sites include the palate, cheek, gum, nasal cavity, maxillary sinus, nasopharynx, infratemporal fossa, oral cavity, base of tongue, supraglottic larynx), and the submandibular gland. It comprises approximately 1% of all salivary gland carcinomas (11). Occasionally, cases have been reported in the sublingual gland (18-29). Myoepithelial carcinomas diagnosed in other parts of the body are exceedingly rare.

Due to the rarity of myoepithelial carcinoma, its growth patterns, biological behavior, survival data and prognostic factors are largely unknown. The lack of knowledge on the incidence and biological properties of the condition certainly hamper further investigation for the more optimal management of the disease. Therefore, we conducted this study with an aim to describe the basic clinical patterns of the disease occurrence including the most common pathogenic locations, age, differences between adult versus children and male versus female using the SEER.

In our study, 368 patients were collected from the SEER database in 22 different sites over 40 years (Table 1). This is the largest population-based myoepithelial carcinoma distribution study with largest numbers of tumor sites, validating and improving the information described in previous small series or case reports of myoepithelial carcinoma. Across all age groups, oral cavity/pharynx were the most common locations of origin, followed by breast, soft tissue (including heart), respiratory system, and skin where myoepithelial cells are typically located.

Results from previously published series suggested that median age of diagnosis of myoepithelial carcinoma was 60 years (30,31). We had found, similarly, that the median age at diagnosis of all patients was 72 in our series, and the mean age was 52. The age range of 60–69 had the highest frequency for myoepithelial carcinoma in oral cavity and pharynx.

Myoepithelial carcinoma is commonly reported with its benign counterpart, myoepithelioma, in pediatric series; however, it is usually not well represented in most publications. Several authors concluded that they are more aggressive in the pediatric population than in adult patients as half of the cases developed distant metastasis and 43% succumbed from disease progression (8). Because of this apparent difference in biology, patients were stratified by age at the time of their initial diagnosis into children/adolescents (≤18 years) and adults (>19 years) in our study. Only 15 children/adolescents were identified in the database between 1973–2012. Further, we found that adults, particularly males, more commonly had oral cavity/pharynx, which may be induced by more frequent consumption of tobacco and alcohol in adults compared to children, whereas children were more likely to harbor disease arising in soft tissues (including heart), which was highly consistent with the previous reports for myoepithelial carcinoma in children (32,33).

Different single-institution series of myoepithelial carcinoma have showed variability in sex distribution, from equal sex distribution (1:1) to female predominance (4:1) (18,20,22). Our results indicated that the incidence did not differ significantly with respect to sex. Approximately 45% of the patients were male, and 55% were female. The fact that female patients were more likely to harbor myoepithelial carcinoma in the breast as compared to male is not difficult to understand. On the other hand, why the condition occurred more commonly in the skin and oral cavity/pharynx in male patients is perplexing. We speculate that the more frequent use of tobacco and alcohol in males than in females could be the cause of such difference. However, the interesting finding, that the incidence of myoepithelial carcinoma remained stable for females, but demonstrated a trend of increase in male in our series was also puzzling, as the use of tobacco in males has been on a decreasing trend in the U.S. in the past several decades. The underlying mechanism for the increasing trend of myoepithelial carcinoma in males remains unknown. Among all the ethnic groups in the U.S., the predominant race was White as compared to other races including African American, American Indian/Alaskan Native, and Asian as expected because of the overall racial compositions of U.S., no difference in incidence were demonstrated by race of the patients.

Ideally, the analysis of a rare event, such as myoepithelial carcinoma, should be analyzed from a more complete dataset that is gathered over an effective period of time and is further subjected to variability from different suppliers of data. However, changes in the diagnostic criteria in the past few decades can also result in the under-reporting of myoepithelial carcinoma cases in the SEER registry. The diagnostic process is typically done locally and information including immunohistochemistry or electron microscopic confirmation of the diagnosis is not always available. Even with complete information, definite pathological criteria of myoepithelial carcinoma are not always well delineated. Although we tried to analyze the data collected between 1973–2012, the missing details, especially those in the earlier years, make it difficult to accurately analyze the trend of the disease over a longer period of time. As a result, we could only get the trend of incidence patterns over the last decade. Despite all of the aforementioned limitations, this series is the largest study to analyze the incidence patterns of patients with myoepithelial carcinoma and may prove useful in providing insight and directing future investigations on patient outcomes.

This SEER analysis is the largest observational study that examines the associations of age at diagnosis, gender, ethnicity, and primary tumor location and correlates with the incidence of myoepithelial carcinoma. The incidence was higher in oral cavity/pharynx than other sites, but did not differ in overall incidence with respect to gender or ethnicity. The median age of diagnosis was 70 years. In addition, our study demonstrated that the overall incidence of myoepithelial carcinoma seems to have increased over the last decade. Such an observation is largely driven by the male patient population. Understanding these incidence patterns with respect to the location of the disease and age may facilitate in the advancement our understanding of the biology of myoepithelial carcinoma and its management.

Ethical Statement: This article does not contain any studies with human participants performed by any of the authors.