RIPK1-TRAF2 interplay on the TNF/NF-κB signaling, cell death, and cancer development in the liver

Hepatocellular carcinoma (HCC) is one of the most common causes of cancer-related death worldwide, with an estimated 782,000 new cases and 745,000 deaths in 2012 (1). According to the SEER Cancer Statistic Review (2), the prognosis of liver cancer patients is still poor with 5-year survival rate of 17.5%, and incidents of new cases have been rising each year at ~3% on average over the last 10 years. The prominent factors associated with HCC include chronic infection of hepatitis viruses (HVB, HVC), chronic alcohol consumption, non-alcoholic steatohepatitis, and exposure to hepatotoxins (3). Chronic liver damage following inflammation and cell death, accompanied by regenerative processes, is a feature of HCC development (3), suggesting that understanding the molecular machinery involved in cell death and regeneration in the liver may help identify molecular mechanisms of HCC.

Receptor-interacting protein kinase 1 (RIPK1), a member of the receptor-interacting serine/threonine kinase family, has pivotal roles in inflammatory signaling and activation of multiple cell death pathways (4). The physiological functions of RIPK1 are well documented in inflammatory signaling; however, its role in cell death and HCC development accompanied by liver inflammation remains unclear. RIPK1-mediated signaling is activated upon binding of tumor necrosis factor (TNF) secreted by macrophages and other immune-inflammatory cells to the TNF receptor 1 (TNFR1) (5). Subsequently, TNFR1 recruits a membrane-associated complex I containing TNFR1-associated death domain protein (TRADD), RIPK1, and TNFR-associated factor 2 (TRAF2) (6). In this complex, RIPK1 functions as a scaffold by rapidly being polyubiquitinated, and this linear ubiquitination chain serves as a binding site to NF-κB essential modulator (NEMO), which activates NF-κB signaling following phosphorylation of IκB (Figure 1). Meanwhile, disassembly of the complex I through activation of deubiquitylation enzymes (A20, CYLD) and subsequent deubiquitination of RIPK1 occurs to reform complex IIa and IIb (6,8,9). Complex IIa, consisting of FADD, caspase-8, and RIPK1, mediates apoptosis in a manner dependent on the kinase activity of RIPK1. RIPK1 kinase activity also plays a role in the activation of necroptosis by binding with RIPK3 as a complex IIb (Figure 1). To better understand the role of RIPK1-mediated signaling in HCC genesis, it is imperative to distinguish the dual functions of RIPK1 (as a scaffold and a kinase) in hepatocytes. TRAF2, which binds with RIPK1 to form complex I and is stabilized by RIPK1 in mouse embryonic fibroblasts (MEFs) (10), also plays a crucial role in mediating multiple pathways including NF-κB, JNK, and TNFR1-induced apoptosis pathways (11). However, detailed mechanisms of how TRAF2 regulates these pathways in hepatocytes and its contribution to HCC development have not been investigated. 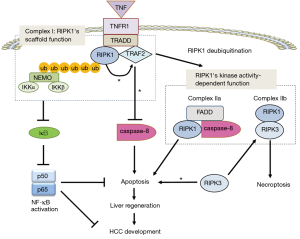 In the recent issue of Cancer Cell, Schneider et al. (7) address the in vivo physiological functions of RIPK1 and TRAF2 using liver parenchymal cell (LPC)-specific knockout mice for RIPK1 (RIPK1LPC-KO), as well as TRAF2 (TRAF2LPC-KO), since mice deficient for RIPK1 and TRAF2 die soon after birth due to systemic inflammation (12,13). RIPK1LPC-KO mice have normal liver function without spontaneous HCC development; however, upon LPS administration, RIPK1LPC-KO mice show dramatic induction of apoptosis and liver damage with normal response to NF-κB, as compared with wild-type mice (Table 1). TRAF2 LPC-KO mice also do not spontaneously develop HCC but show slight increase in NF-κB activity, apoptosis, and liver damage (Table 1). On the other hand, double knockout mice for RIPK1LPC-KO/TRAF2LPC-KO and TRAF2LPC-KO/IKKβLPC-KO spontaneously show apoptosis and damage in the liver with HCC development; NF-κB activation by TNF stimulation in primary hepatocytes from these mice is impaired (Table 1). Moreover, concomitant deletion of caspase-8 completely rescues liver damage observed in RIPK1LPC-KO mice, as well as spontaneous liver damage and HCC development in RIPK1LPC-KO/TRAF2LPC-KO mice (Table 1). They additionally show that loss of RIPK1 promotes ubiquitination and degradation of TRAF2 in mouse hepatocytes in a manner independent of kinase activity of RIPK1 using primary cells from mice lacking the kinase activity of RIPK1 (RIPK1KD). These results indicate that RIPK1’s scaffold function is required for stabilization of TRAF2 and that RIPK1 collaborates with TRAF2 for preventing caspase-8-mediated apoptosis and HCC development in mice. 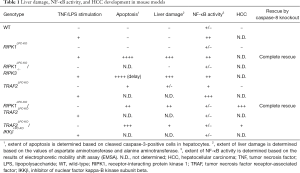 As mentioned above, polyubiquitinated RIPK1 is shown to activate NF-κB via NEMO-IKK-IκB signaling. Their findings also suggest another scaffold function of RIPK1 in which RIPK1 stabilizes TRAF2 in hepatocytes, thereby inhibiting caspase-8-mediated apoptosis and liver damage (7). Intriguingly, deubiquitinated RIPK1, in turn, forms a complex IIa with FADD and caspase-8 to induce apoptosis or a complex IIb with RIPK3 to induce necroptosis (14-16) (Figure 1).

To further understand functional association between RIPK1 and TRAF2 and the involvement of NF-κB signaling in spontaneous HCC genesis, Schneider et al. (7) investigate liver damage and HCC development in RIPK1LPC-KO/TRAF2LPC-KO and TRAF2LPC-KO/IKKβLPC-KO mice, in comparison with those in TRAF2LPC-KO mice. Both RIPK1LPC-KO/TRAF2LPC-KO and TRAF2LPC-KO/IKKβLPC-KO mice spontaneously develop liver damage and HCC with impaired NF-κB activity; whereas, TRAF2LPC-KO mice, which show functional NF-κB activity and slightly increased apoptosis/damage in the liver, fail to develop HCC. These results might imply that RIKP1 and IKKβ have anti-apoptotic or liver protective functions other than NF-κB regulation. Data may also suggest that impaired NF-κB function accelerates liver damage and HCC genesis induced by loss of TRAF2; however, it is unclear how exactly impaired NF-κB function contributes toward spontaneous HCC development. Luedde et al. (18) previously show that NEMOLPC-KO mice with impaired NF-κB function spontaneously develop HCC following nonalcoholic steatohepatitis; whereas, IKKβLPC-KO mice which also have impaired NF-κB function fail to develop steatohepatitis and HCC. Furthermore, complete deletion of NF-κB by knocking out all the subunits of NF-κB in mice (NF-κBLPC-KO) does not induce HCC (15). Thus, loss of NF-κB alone does not induce HCC; however, loss of NF-κB could collaborate with other genetic alterations toward liver damage and spontaneous HCC development. In contrast to the aforementioned possible tumor suppressive role of NF-κB in HCC genesis, pro-carcinogenetic function of NF-κB is demonstrated in a model of inflammation-associated HCC, in which concomitant deletion of IKKβ abolishes spontaneous HCC development observed in Mdr2−/− mice (19). Thus, contributions of NF-κB to HCC development are controversial and depend on physiological settings or cellular contexts.

The clinical relevance of RIPK1 and TRAF2 to human HCC progression is also demonstrated in this paper (7). Low expression of RIPK1 and/or TRAF2 has strong correlation with worse prognosis in patients with HCC; however, detailed analyses of apoptosis and NF-κB activity in tumors warrant further investigation. The mechanisms behind reduced expression of RIPK1 and TRAF2 in human HCC also remain to be elucidated. Since expression levels of RIPK1 and TRAF2 vary among cancer types (20), it would be important to inquire whether RIPK1 and/or TRAF2 inhibit apoptosis and tumor progression in other cancer types. At present, there is no strategy that can prevent development of HCC resulting from liver inflammation, apoptosis, and regeneration. Further molecular analyses underlying liver damage and HCC development would help identify novel targets for HCC therapy.

We thank Atul Ranjan, Alejandro Parrales, and Elizabeth Thoenen for editing the manuscript and helpful discussion.

Provenance and Peer Review: This article was commissioned and reviewed by the Section Editor Bo Zhai (Department of Hepatobiliary Surgery, The Fourth Hospital of Harbin Medical University, Harbin, China).

Conflicts of Interest: Both authors have completed the ICMJE uniform disclosure form (available at http://dx.doi.org/10.21037/tcr.2017.04.01). The authors have no conflicts of interest to declare.