ALK positive accounts for around 5% of NSCLC patients, most frequently young, adenocarcinoma histology, never or light smokers (2). In this trial, ALK-rearrangement was determined centrally by the VENTANA anti-ALK (D5F3) immunohistochemistry assay. Other accepted detection techniques include fluorescence in situ hybridization (FISH), reverse transcription PCR (RT-PCR) and next generation sequencing (NGS) methodologies as nCounter (3).

Crizotinib was the first ALK inhibitor to receive US Food and Drug Administration approval for untreated ALK positive patients through the demonstration of its superiority against standard platinum-based chemotherapy in terms of progression-free survival (PROFILE 1014 study: 10.9 vs. 7.0 months) (4). However, most patients treated with crizotinib ultimately progress, with the CNS being a common site of progression. The activation of early resistance mechanisms and lack of penetration through the blood-brain barrier are the most accepted explanations for that.

Ceritinib is a second generation oral small-molecule tyrosine kinase inhibitor active against ALK, ROS protoncogene 1 (ROS1) and insulin-like growth factor 1 receptor (IGF-1R). Its main characteristics are: high ALK inhibitory potency in enzymatic assays (20× compared to crizotinib) and its ability to cross through the blood-brain barrier in animal models. This is particularly important given that SNC metastatic spreading is frequent in ALK rearranged NSCLC at the moment of diagnosis (5) (around 30% of the patients included in this trial presented with brain metastases at enrollment) and as an important mechanism of resistance to crizotinib previously mentioned.

The ASCEND program has thoroughly evaluated the safety and activity of ceritinib in different settings and has consistently shown that ceritinib 750 mg/day has a durable antitumor effect in pre-treated ALK rearranged NSCLC patients (6-8). ASCEND-4 is the first trial to evaluate ceritinib in untreated ALK positive NSCLC patients compared to standard platinum chemotherapy. The results published in this paper demonstrate a clinically meaningful superiority of ceritinib against chemotherapy and Soria and colleagues state that ceritinib could be considered the new standard first line treatment for ALK positive NSCLC patients. In detail, median progression-free survival was 16.6 months (95% CI, 12.6–27.2) in the ceritinib group and 8.1 months (95% CI, 5.8–11.1 months) in the chemotherapy group. Ceritinib superiority was even more noticeable in patients without baseline brain metastases: in this subgroup the median progression-free survival was 26.3 months (95% CI, 15.4–27.7) vs. 8.3 months (95% CI, 6.0–13.7). In addition, ceritinib showed a high overall intracranial response rate of 72.7%, an intracranial clinical benefit rate of 86.4% at 24 weeks, and a median duration of intracranial response of 16.6 months (95% CI, 8.1 to not estimable), although the subgroup of patients with measurable brain disease was small. These data suggest that ceritinib is not only able to induce brain metastases response, but delay or prevent SNC progression in a more effective way than chemotherapy and, most probably, crizotinib.

One of the main caveats of ceritinib is that the starting dose of 750 mg/day on an empty stomach is associated with a high frequency of gastrointestinal toxicity that affected the majority of patients (85% diarrhea, 69% nausea, 65% vomiting). Although this toxicity was mostly grade 1 or 2, it lead to dose adjustment or interruption of the drug in as much as 28% of the patients. Despite the extensive previous dose finding research, this trial reveals the need for readjusting the dose of ceritinib in real life patients. In that regard, Soria et al. suggest that a reduced dose of 450 mg/day with food significantly reduces gastrointestinal toxicity, without reducing exposure to the drug, thus paving the way for further development of this schedule.

Other second generation ALK inhibitors are in development in the clinical setting and their results will have to be compared with those of ceritinib in order to understand its role in NSCLC ALK positive patients’ management. The main features to be evaluated are ALK inhibitory potency, SNC activity, activity against ALK resistant mutations, other receptors’ inhibition and toxicity profile. Alectinib, brigatinib and lorlatinib have an increasing amount of clinical data, but there are more candidates on the way, such as entrectinib, ensartinib, belizatinib and TPX005, among others.

Of particular interest is the fact that almost one third of the rebiopsies of patients progressing to crizotinib present resistant mutations in the ALK receptor (9,10). This adaptive mechanism of resistance is very similar to that seen in EGFR mutant patients treated with first-generation EGFR inhibitors, and clinicians should know these resistance profiles, in order to decide which ALK inhibitor to use. The efficacy of different ALK inhibitors to determine resistance mutations is summarized in Table 1. 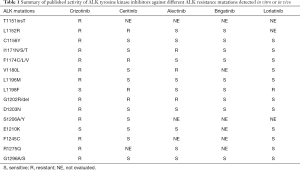 Cabozantinib is an orally available tyrosine kinase inhibitor that is active against several receptors, including RET, ROS1, MET, VEGF2, AXL, KIT and TIE-2. It is currently approved by the US Food and Drug Administration for the treatment of metastatic medullary thyroid carcinoma harboring RET mutations or chromosomal rearrangements leading to RET gene fusions.

Neal and colleagues hypothesized that MET expression measured by immunohistochemistry could act as a valuable biomarker for cabozantinib activity, however, they found no correlation in its study population.

At this point, an increasing amount of preclinical data suggests that RET gene fusions could be an actionable target in patients with NSCLC, mirroring thyroid carcinoma, and two recent publications have evaluated the activity of cabozantinib in this setting. In the first, Alexander Drilon and colleagues gave 26 patients with RET fusion-positive NSCLC 60 mg of cabozantinib per day (12). The second paper by Gautschi et al. was not a prospective clinical trial, but the retrospective results of an international registry describing real-life use of RET inhibitors (including cabozantinib) in RET fusion positive NSCLC patients (13). Table 2 summarizes the efficacy results of both papers, along with both cabozantinib containing arms from Neil’s trial.

Table 2 Comparison of activity data reported by Neal in cabozantinib containing arms with the results of Drilon and Gautschi in RET fusion positive patients.
Full table

Intriguingly, while overall response rates seem higher in the two RET enriched samples of patients (Gautschi 37% and Drilon 28% compared to 11% on Neil’s cabozantinib arm), PFS (3.6 vs. 5.5 vs. 4.3) and OS (4.9 vs. 9.9 vs. 9.2) are very similar for every group, regardless of RET positive enrichment. Gautschi’s group argue that the weak RET inhibitory activity of cabozantinib and other available multikinase drugs is responsible for the limited clinical benefits obtained by the patients and propose further research with more potent targeted agents for the RET fusion positive population. In addition, more detailed knowledge of the biology of RET driven NSCLC tumors is warranted, including the clinical meaning of different fusion variants and the adaptive resistance mechanisms, like RET mutations or the potential cross-talks, with alternative pathways leading to inhibition escape.

In this regard, AXL has become one of cabozantinib’s most promising targets, since preclinical evidence suggests that this receptor is highly involved in epithelial-mesenchymal transition programs activated in tumor cells as a mechanism of resistance to different drugs, such as erlotinib (14). As an example of the growing interest in this pathway, a phase 1/2 clinical trial is ongoing to test the combination of S49076, an AXL and MET inhibitor, plus gefitinib, in EGFR mutant patients that have progressed on first line EGFR inhibitors and that do not harbor the T790M gatekeeper mutation in the rebiopsy at the moment of progression (EudraCT 2015-002646-31).

The studies of Soria and colleagues and Neal and colleagues report practice-changing evidence that lung cancer oncologists should quickly incorporate: the first one establishes ceritinib as the most powerful treatment available today against previously untreated ALK positive NSCLC; the second one confirms the lack of efficacy of Erlotinib treatment for EGFR wt NSCLC patients and supports further research of cabozantinib combinations for NSCLC cancer treatment.

Thanks to Stephanie Davis for her editorial assistance.

Conflicts of Interest: Both authors have completed the ICMJE uniform disclosure form (available at http://dx.doi.org/10.21037/tcr.2017.05.33). The authors have no conflicts of interest to declare.