According to the current concept, a typical tumor contains “driver gene” mutations that establish a growth advantage to the tumor cell (1). It was proposed that one of the first mutations must have either a mutation that introduces a selective growth advantage to a normal cell (1) or one of the first mutations results in genomic instability, thus, increasing the chance for the accumulation of further mutations (2). Recent data indicate that metabolic reprogramming by (somatic) mutations of key metabolic genes promotes cancer growth (3). In this context metabolic adaptations upon aging need to be considered as hallmark of cancer (4). Since the landmark discovery of cancer-specific enhancement of glycolysis with concurrent small respiration (5), abnormalities in mitochondrial functions as a key phenomenon of the metabolic peculiarities of cancer cells has been postulated. Otto Warburg assumed that the accumulation of lactate in cancer tissue is the result of enhanced anaerobic glycolysis and dysfunctional mitochondrial respiration. This assumption was lately challenged by still controversial findings of a reduced conversion of phosphoenolpyruvate to pyruvate by the less active, cancer-specific isoform pyruvate kinase 2 (PKM2) (6), which might limit the production of ATP from glycolysis, but boosts the accumulation of intermediate products like nucleic acids and phospholipids for cancer cell growth (7). Nevertheless, Otto Warburg was prophetic in his view on the role of metabolism for cancer. Recent work highlights alterations of mitochondria-associated genes to play an essentially role in the metabolic reprogramming in cancer cells that play a supportive, if not causative role in tumorigenesis (8). The latter hypothesis was stressed by a recent work where mitochondria/cytosolic transfer from a cancer cell into a somatic cell turned the latter one to a cancer cell as well (9). While the interpretation of this work is complex, mitochondrial metabolic and signal functions that undergo a cancer-specific transformation (4) involving mitochondria-endoplasmic reticulum (ER) settings (10,11) are known to be essential to meet the enhanced energy demand of a cancer cell. The study “MICU1 drives glycolysis and chemoresistance in ovarian cancer” by Chakraborty et al. recently published in Nature Communications (12) describes important new findings supporting the current hypothesis on mechanistic/functional mitochondrial adaptations to be crucial for cancer cell development. Importantly this work points to a crucial role of mitochondrial calcium uptake 1 (MICU1), the gatekeeper of mitochondrial Ca2+ uniport (MCU) (13), for glycolysis and chemoresistance in ovarian cancer. Notably, this work considerably fuels current hypothesis on the importance of mitochondrial Ca2+ uptake for cancer cell survival and growth (10,11,14) and points to adaptations in mitochondrial Ca2+ as a hallmark in the adjustment of mitochondrial activity in cancer cells.

All about mitochondrial calcium? 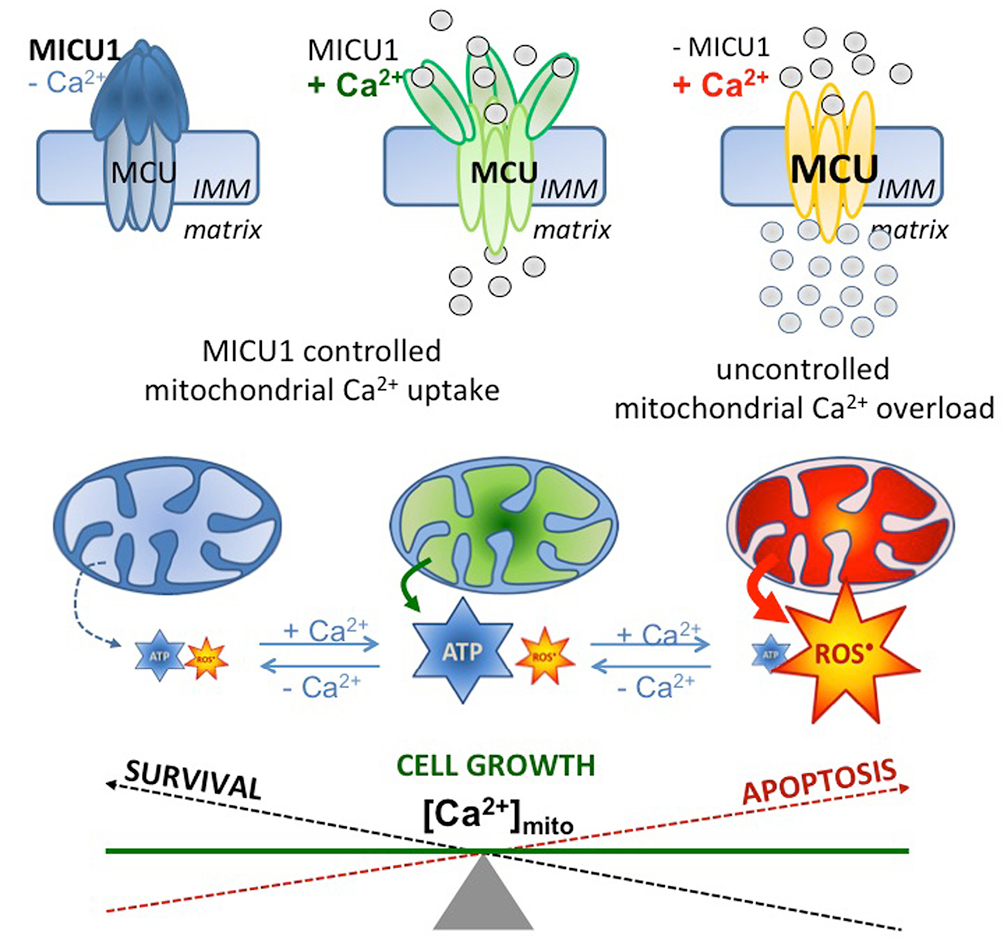 Accordingly, there is a large body of evidence that mitochondrial Ca2+ is of utmost importance for (cancer) cells homeostasis, functions, growth, migration, and, ultimately, survival. The contribution of Chakraborty et al. convincingly demonstrates that besides cancer cell survival, their glycolytic activity and chemoresistance are also critically associated with mitochondrial Ca2+ uptake (12).

Mitochondrial Ca2+ uptake in cancer: the balance between energy and death

This incomplete list illustrates the flexibility of cancer cells to address the issue of keeping the balance between enough mitochondrial Ca2+ uptake to meet the cell’s ATP demand while to avoid mitochondrial Ca2+ overload in order to stay clear from the initiation of apoptotic processes that ultimately would cause cancer cell death.

Many authors including Chakraborty et al. (12,26) have indicated the potential of targeting mitochondrial Ca2+ uptake to fight against cancer growth. In this regard, three approaches appear most promising to be effective to introduce mitochondrial Ca2+ overload leading to apoptotic cancer cell death:

While controlled mitochondrial Ca2+ uptake promotes cancer cell growth, the adequate transfer of Ca2+ into mitochondria is also of utmost importance for the proper functioning of somatic cells and tissues. Therefore, future work essentially needs to be aimed on the identification of cancer specificities in mitochondrial Ca2+ handling that can be therapeutically targeted to selectively fight cancer cells without affecting non-cancerous cells.

Funding: The authors are supported by the Doctoral College “Metabolic and Cardiovascular Disease” at the Medical University of Graz that was funded by the FWF (W 1226-B18, DKplus Metabolic and Cardiovascular Disease), the PhD program Molecular Medicine (MOLMED) at the Medical University of Graz, the FWF (P 28529-B27) and by Nikon Austria within the Nikon-Center of Excellence, Graz. Microscopic equipment is part of the Nikon-Center of Excellence, Graz that is supported by the Austrian infrastructure program 2013/2014, Nikon Austria Inc., and BioTechMed, Graz.