Morphine, when used for treating patients with acute pancreatitis, could be more risky than previously suspected

Acute pancreatitis (AP) refers to an inflammatory disease of the pancreas. AP typically develops as a consequence of gallstones migration or a moderate to considerable chronic alcohol drinking. The majority of the attacks of AP do not lead to complications, and most people recover completely with simple medical attention. Mild AP typically resolves with supportive care, which requires only monitoring, drugs for decreasing pain, and infusion of intravenous fluids and electrolytes. However, a little proportion of patients, developing a severe AP, has a more serious illness that requires intensive medical attention. This is because severe AP is associated with high morbidity and mortality due essentially to the multisystem organ failure and the development of secondary infection of the necrotic tissue that occurs as a consequence of the intestinal flora translocation. This is why people with severe AP must be closely monitored in an intensive care unit.

When not fatal, attacks of AP show a self-limiting course followed by complete tissue regeneration. This is because pancreatic acinar cells are able to defend themselves against cellular injury, to inhibiting further progression of the disease, in part by activating an acute phase reaction characterized by a massive but reversible changing in pancreatic gene expression (1). In fact, whereas the acute phase response genes and some stress genes are up-regulated, genes coding for secretory enzymes as well as markers of differentiation were simultaneously down-regulated (2). Multiple cell types participate in the process of exocrine pancreas repair and regeneration which is starting almost instantaneously from the point of injury. Importantly, the cells involved in pancreas regeneration include not only the acinar cell, but also epithelial cells of the ducts, inflammatory cells such as neutrophils, macrophages and lymphocytes, and pancreatic stellate cells responsible of the transitory fibrogenesis. The pancreatic regeneration occurs as a consequence of a coordinate activation of several signaling pathways involved in both cell growth and differentiation. The most relevant are Wnt/β-catenin, affecting growth rather than differentiation during regeneration; Notch, Hedgehog and Hippo signaling pathways that are involved in suppressing chronic inflammation and maintaining acinar identity; and the epidermal growth factor receptor (EGFR) signaling, which is participating to the persistent acinar-ductal transdifferentiation.

The chief symptom of AP is the abdominal pain that is typically reported in the epigastric region or right upper quadrant which in the majority of the patients it is radiating into the upper back or right shoulder. AP generally causes an intense and continuous pain, and consequently, it requires an effective treatment. Opioids, principally morphine, could be a suitable choice in the treatment of AP pain. When compared with other analgesic possibilities, morphine could decrease the necessity of additional analgesia, which could be a real clinical advantage. However, during the last years, the utilization of opioids for the treatment of patients with AP was only partially useful because opioid, especially morphine, were from long time considered to cause dysfunction of the sphincter of Oddi when systemically administered (3,4). Nonetheless, several studies, including sophisticated meta-analysis, suggest that morphine has no demonstrated significantly negative effect on the course of AP (5-9). In this context, whether or not morphine has a harmful effect on the evolution of AP remains still controversial in the clinic.

In a recent work Barlass and collaborators report a nice study performed in mice in which they extensively analyzed the consequences of morphine administration during the AP evolution (10). In this study it is clearly found that treatment with morphine of mice with an experimentally induced AP exacerbates the severity of the disease with an increased pancreatic necrosis and neutrophilic infiltration in the pancreas and lung. Unexpectedly, authors report that morphine treatment also increased AP-induced gut permeabilisation with bacterial translocation and dissemination into the studied organs (i.e., mesenteric lymph nodes, liver and lung). Finally, but not less important, morphine treatment delayed macrophage infiltration, expression of some cytokines and chemokines by the pancreatic tissue as well as pancreatic regeneration (Figure 1). Said in other words authors provide strong evidences that morphine treatment worsens the severity of AP and delays resolution and regeneration, at least in experimental AP induced in mice. 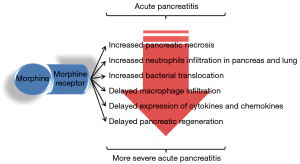 The report of Barlass and collaborators (10) is opening on several unsuspected effects of the treatment with morphine on AP evolution that should be considered in the further clinical studies. Although, there are presently no evidences in increasing the risk of AP complications or development of more grave clinical events between using opioids or other analgesic possibilities, future research must emphasizes on the design of clinical trials with higher included patients and the measurement of relevant consequences for decision-making, such as the number of participants showing reductions in pain intensity, development of single or multisystem organ failure and pancreatic regeneration. Finally, longitudinal clinical trials are also needed to determine the increasing risk of development of AP complications and adverse events related to the use of morphine.

Conflicts of Interest: Both authors have completed the ICMJE uniform disclosure form (available at http://dx.doi.org/10.21037/tcr.2017.09.05). The authors have no conflicts of interest to declare.