Glioblastoma is a high-grade tumor of the central nervous system (CNS). Prognosis for patients diagnosed with this deadly cancer is poor, with a 5-year-survival rate of 9.8% (1). Affected patients often present with generalized CNS symptoms that worsen over time including headaches and seizures. Contrast-enhanced magnetic resonance imaging (MRI) is performed to confirm the presence of an abnormal mass, but a proper diagnosis requires analysis of a tumor sample by a pathologist. This sample can be obtained through biopsy or at the time of surgical resection. Pathologists grade glial derived tumors according to the WHO classification system (2), with glioblastoma being the highest grade (WHO grade IV). Glioblastomas can be primary, appearing in the absence of a precursor lesion, or secondary, progressing from lower grade glial tumors.

All eligible patients will have their glioblastoma surgically resected with the goal of removing as much of the malignancy as possible while preserving neurological function. Observational studies have shown that extent of resection is a prognostic factor, and that a more complete resection confers an improved prognosis (3). Despite the clear benefits of surgery, glioblastoma is an infiltrative tumor and at the time of diagnosis cancer cells have often spread from the primary lesion and into the adjacent brain tissue. Adjuvant radiation followed by temozolomide chemotherapy is given as the standard of care with the goal of eradicating this residual disease. Addition of radiation to surgical resection prolongs overall survival (OS) in glioblastoma patients (4). Patients typically receive involved field radiation therapy (IFRT). Unlike whole brain radiation therapy (WBRT), IFRT irradiates only the tumor site and a 2-cm margin of surrounding brain tissue. The addition of alkylating agent temozolomide to radiation further prolongs survival (1,5). Molecular alterations with prognostic and predictive value have been identified in glioblastoma tumors. Methylation of the O6-methylguanine-DNA methyltransferase (MGMT) promoter correlates with an overall better prognosis (6). The MGMT gene encodes a DNA-repair protein that removes alkyl groups from the O6 position of guanine. Epigenetic silencing of this gene leads to increased DNA damage following treatment with alkylating chemotherapy (7) such as temozolomide.

Despite the survival benefits associated with adjuvant use of radiation and temozolomide, almost all patients will eventually relapse. Single cell sequencing has revealed extensive intratumoral heterogeneity within individual glioblastoma tumors (8). Glioblastoma tumors contain a population of cells capable of self-renewal and known as cancer stem cells (CSCs). There is data suggesting that glioblastoma CSCs are responsible for tumor relapse (9), and they are highly resistant to both chemotherapy and radiation. Relapsed glioblastoma patients can be treated with reoperation and re-irradiation, but these interventions have significant risks and are ultimately palliative. As systemic therapy for relapsed glioblastoma, patients currently have the option of receiving bevacizumab, nitrosoureas, or a rechallenge with temozolomide. Bevacizumab, a humanized monoclonal antibody targeting VEGF-A, is associated with a wide variety of toxicities and has not demonstrated an ability to improve OS in this setting (10,11). Nitrosourea based chemotherapy and temozolomide rechallenge are also associated with significant toxicities and do not dramatically extend survival. Clearly there is a significant shortage of therapies that are both nontoxic and efficacious for patients with relapsed glioblastoma.

Preclinical activity of ONC201 in glioblastoma

ONC201 is the first member of the imipridone class of small molecules (12,13). The compound is currently being tested in phase II clinical trials of patients with hematological malignancies and solid tumors (14,15). ONC201 was discovered in a phenotypic screen for compounds that could transcriptionally induce the TNF-related apoptosis inducing ligand (TRAIL) gene in colon cancer cells, independent of p53 status (16,17). ONC201 has since then demonstrated the ability to potently and selectively induce growth arrest and apoptosis in many different tumor types, with limited or no toxicity to normal cells (16,18-20). The integrated stress response (ISR) is important in the pro-apoptotic effects of ONC201, with transcription factors ATF4 and CHOP involved in upregulation of TRAIL receptor DR5 (21,22). ONC201 has also demonstrated single agent efficacy in eliminating CSCs in colorectal, glioblastoma and prostate cancer models (23,24). The binding target of ONC201 was unknown until recent computational studies predicted antagonism of dopamine receptors. In vitro binding studies have confirmed the compound to be direct competitive antagonist of D2-like receptors dopamine receptors DRD2 and DRD3 with a binding affinity (Ki) of 3 μM (25).

The earliest preclinical studies conducted with ONC201 showed signs of efficacy against glioblastomas (Figure 1). ONC201 upregulates TRAIL and induces apoptosis in several glioblastoma cell lines, including those resistant to standard of care therapy temozolomide. In addition, ONC201 shows potent cytotoxicity in bevacizumab, temozolomide, and radiation resistant glioblastoma patient samples. More recently, the compound was shown to inhibit the growth of glioblastoma CSC cells in 3D neurosphere cultures, established from freshly isolated human glioblastoma tumors. Most importantly, studies in glioblastoma mouse models have shown that ONC201 crosses the blood brain barrier and inhibits tumor growth (16). The first-in-human trial of ONC201 determined the recommended phase II dose (RP2D) to be 625 mg, orally administered every three weeks. This dose was well tolerated and biologically active. Within hours of ONC201 treatment, levels of caspase-cleaved keratin 18 and prolactin (a marker of DRD2 antagonism) were increased in patient serum. Several treated patients showed radiographic regression of metastatic disease as well as prolonged stable disease (15). Together, these preclinical and clinical data indicate that ONC201 is an exciting and novel candidate therapy that merits clinical evaluation in patients with glioblastoma. 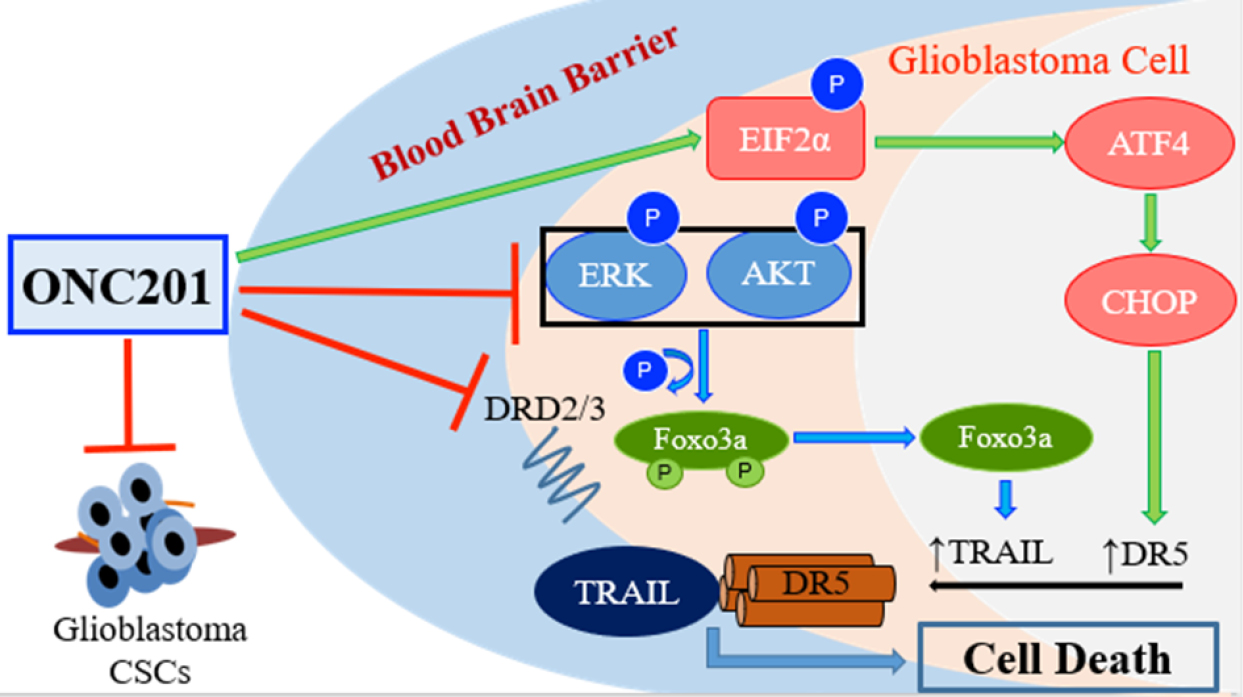 Figure 1 Mechanism of action of ONC201 in glioblastoma. Small molecule ONC201 crosses the blood brain barrier and exerts it effects against glioblastoma bulk tumor cells and cancer stem cell-like (CSC) cells. ONC201 antagonizes dopamine receptors DRD2 and DRD3. The link between dopamine receptor antagonism by ONC201 and the downstream cell death signaling pathways perturbed by ONC201 is continuing to be unraveled. ONC201 dually inhibits phosphorylation of Akt and ERK, leading to the dephosphorylation of transcription factor FOXO3A. Dephosphorylated FOXO3A translocates into the nucleus where it activates transcription of its target genes, including pro-apoptotic death receptor ligand TNF-related apoptosis inducing ligand (TRAIL). ONC201 also activates the integrated stress response (ISR) through stimulation of EIF2α kinases. Phosphorylation of EIF2α leads to induction of transcription factors ATF4 and CHOP, which then increase DR5 expression. The combined upregulation of the ligand TRAIL and its surface receptor DR5 by ONC201 ultimately triggers cancer cell death.

Clinical activity of ONC201 in glioblastoma

In a recently published article (26), Arrillaga-Romany et al. describe the results of a phase II clinical trial of imipridone compound ONC201 in patients with recurrent bevacizumab-naïve glioblastoma. For the preliminary futility analysis, they enrolled seventeen patients with progressive or recurrent glioblastoma and a history of treatment with surgery, radiation, and temozolomide. The median age of the patients was 57 years old and the median time from initial diagnosis to enrollment was 17 months. ONC201 was given once every 3 weeks (21-day cycle) as an oral capsule and was continued until tumor progression. The progression free survival at 6 months (PFS6) was 11.8%, and two patients remained on therapy for greater than 11 months. The median OS of patients enrolled in the trial was 41.6 weeks, with the OS at 6 months (OS6) being 71%.

A 22-year-old female patient with a recurrent secondary glioblastoma achieved a partial response as measured by the RANO criteria (27). This patient’s tumor had a histone H3.3 K27M mutation, a mutation that is present with a high frequency in pediatric glioblastomas. Patients with mutant H3.3 have a poorer OS than those with the wild-type form of the protein (28). The patient’s response was sustained for greater than 6 months, an exciting observation given the dismal prognosis for recurrent glioblastoma. The authors include the patient’s contrast-enhanced MRI scans which show a dramatic reduction in the size of two intracranial lesions from baseline following treatment with 12 cycles of ONC201. Despite one incident of grade III neutropenia and a grade II allergic reaction, the compound was tolerated well overall. This is in agreement with observations about its safety made in the first-in-human trial (15). A biomarker of D2-like dopamine receptor antagonism, prolactin, increased in the serum of the patients in the study.

The results of this study are encouraging, as ONC201 showed preliminary signs of efficacy in patients with an aggressive, treatment-resistant subset of glioblastomas. ONC201 deserves further investigation in a larger cohort of patients with this deadly disease. The ONC201-glioblastoma clinical trial is continuing with an expansion cohort at Massachusetts General Hospital (MGH). There are other open trials of ONC201 in solid tumors (including at Fox Chase Cancer Center and the Cancer Institute of New Jersey) that allow enrollment of patients with glioblastoma. It will be interesting to follow the development of ONC201 in this type of tumor as progression free and OS data accumulate in a larger cohort of patients.

Conflicts of Interest: WS El-Deiry has ownership interest (including patents) in Oncoceutics. The other authors have no conflicts of interest to declare.