IDH mutational status and the immune system in gliomas: a tale of two tumors?

Gliomas are the most common type of primary brain tumor and include glioblastoma (GBM), which is the most lethal form of the disease, and remains a significant, unmet clinical need (1). Contrary to conventional notions of central nervous system immune-privilege, there is indeed extensive cross-talk between the immune system and tumors in the brain. Several successful immune therapies are either in development or have received recent approval from the Food and Drug Administration across a broad array of cancers (Table 1). However, the results for immune therapy against solid tumors in the brain have been less dramatic to date.

A recent manuscript by Berghoff and colleagues offers one reason why certain patients with glioma may not respond as well to immune-based treatment. By segregating gliomas into distinct molecular classes based primarily on the mutational status of isocitrate dehydrogenase 1 and 2 genes (IDH1/2), it was demonstrated that gliomas characterized by wild-type IDH (IDH-wt) displayed a greater number of tumor-infiltrating lymphocytes (TILs) and elevated expression of the immunosuppressive molecule programmed death ligand 1 (PD-L1) when compared to their IDH mutant (IDH-mut) counterparts. This association was recapitulated at the gene expression level by data derived from The Cancer Genome Atlas (TCGA). Although not demonstrated explicitly, one extrapolation the authors suggest is that IDH-wt gliomas may in fact be more “immunologically active” than IDH-mut gliomas and thus more easily targeted by PD-1/PD-L1 checkpoint blockade. That is to say, elevated levels of PD-L1 expression found in IDH-wt glioma, while perhaps associated with baseline immune suppression, may provide a prime opportunity for therapeutic intervention in these tumors.

These observations by Berghoff and colleagues are especially relevant in light of recent FDA approval of several antibody therapies targeting the PD-1/PD-L1 pathway. The results should also be considered in the context of the 2017 randomized CheckMate-143 Phase 3 trial (NCT02017717) for GBM, which unfortunately failed to demonstrate improved survival in patients treated with the PD-1 inhibitor nivolumab versus bevacizumab (2). Additional studies will be needed to investigate why this therapeutic approach, which has had proven benefit in several other tumor types, is meeting with less favorable efficacy for patients with GBM. As previously suggested, patient stratification using genetic markers such as IDH and PD-1/PD-L1 expression may help identify optimal responders to certain immune-based treatments. Towards this end, one limitation of CheckMate-143 is that the patient population was almost assuredly predominantly IDH-wt (IDH mutations are only found in the great minority, approximately 12%, of GBM) (3), making it difficult to adequately power any retrospective effort to determine response to therapy as a function of IDH mutational status in this cohort. Furthermore, regardless of the apparent association between IDH mutations and PD-L1 expression, the true relationship—if any—between level of PD-L1 expression and response to PD-1/PD-L1 blockade in GBM is still ill-defined.

In any case, mounting evidence certainly suggests that mutations in IDH may play a broad role in glioma-associated immune suppression. Metabolically speaking, neomorphic activity of the mutated enzyme results in the accumulation of a molecule, R-2-hydroxyglutarate (R-2HG), which in turn has been implicated in epigenetic dysregulation through DNA hypermethylation (4). This activity ultimately promotes the global repression of several genes, including those involved in eliciting cellular antitumor immune responses (5-7). Consistent with observations made by Berghoff and colleagues, one preclinical mouse model also demonstrated a link between IDH-mut glioma and decreased intratumoral T-cell infiltration. Interestingly, treatment with a specific inhibitor of mutant IDH1 in this model restored cellular immune deficits and enhanced efficacy of an antitumor vaccine (6). Other studies have proposed that mutations in IDH might also serve as effective immune epitopes for antitumor immune therapy (8). The utility of modulating mutant IDH1 metabolic activity in the setting of a vaccine directly targeting the mutation is unknown.

Considering the evidence, there does appear to be mild discordance surrounding the overall relationship between IDH-mut glioma and immune suppression; IDH-mut glioma has been associated with immune suppression in preclinical models, but also with decreased expression of the immune suppressive ligand PD-L1 in human studies. Thus, IDH-mut gliomas possess opposing characteristics that would seem to both abrogate or conversely tolerate antitumor immune responses. Notwithstanding, one might consider that the immune-suppressive metabolic activity of mutant IDH may in fact be agnostic to the independent and profound immune-suppressive properties observed in IDH-wt glioma (9). That is to say, mutations in IDH, while certainly having some mechanistic significance in epigenetic regulation, may even more importantly serve as a genetic marker that delineates biologically divergent tumors, each with distinct immunological milieus.

Indeed, since its discovery in GBM (10), the mutational status of the IDH gene has dramatically altered the way malignant gliomas are classified and treated. This is reflected in the 2016 World Health Organization Classification of Tumors of the Central Nervous System (CNS WHO), wherein molecular parameters such as IDH were, for the first time, used to establish brain tumor diagnoses (11). IDH-mut and IDH-wt glioma currently represent the first and most important distinction in stratifying glial tumors overall. While IDH-wt gliomas are characterized by heterogeneity and a rapid growth rate, IDH-mut gliomas define tumors that have a substantial survival benefit following aggressive surgery or chemotherapy (Table 2) (12,13). There is currently no conclusive evidence that the enzymatic activity of the mutant protein accounts for these changes. In fact, growing literature supports that the stark differences between these tumors (i.e., IDH-mut and IDH-wt) may simply reflect two distinct pathologies, which until recently had been classified together based on histological grading alone. 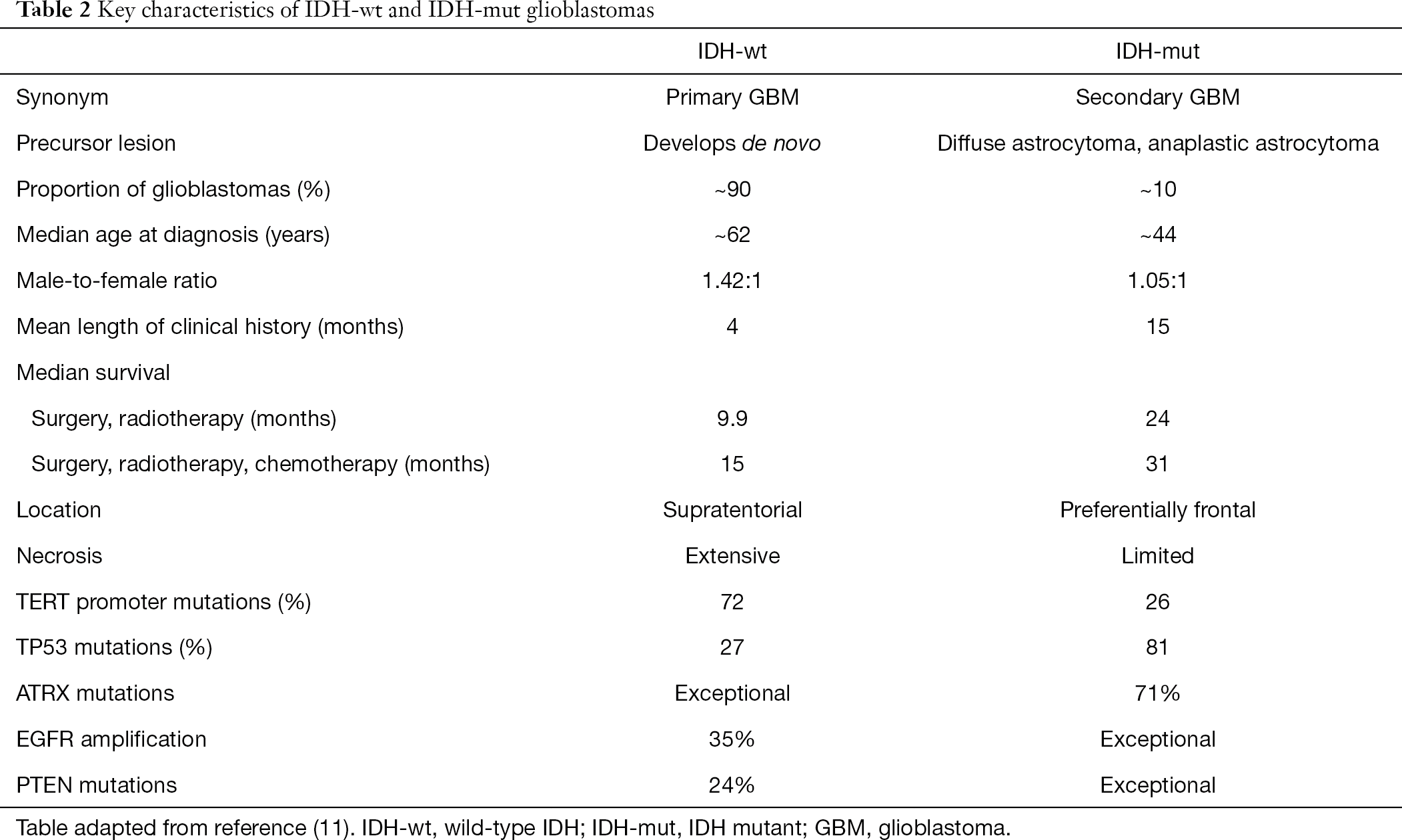 Nonetheless, the question remains whether immunological differences between IDH-mut and IDH-wt gliomas exist primarily due to downstream effects of neomorphic function, or instead reflect inherent variability between disparate tumors; most likely the observed changes reflect a combination of both factors. Additional studies will be needed to determine whether mutations in IDH definitively stratify patients for therapy such as antibody-based immune checkpoint blockade, and if these effects can be predicted by levels of cognate ligand expression or through a better understanding of other emerging mechanisms of IDH-mediated immune suppression. Several outstanding questions remain about the two types of tumor discussed herein, and the impact that IDH may have on basic subsets of well-characterized immune infiltrates. For example, what is the association between IDH mutations and myeloid-derived suppressor cells, macrophages, or microglia? Will there be any influence on regulatory T cells or other aspects of tumor microenvironment driving glioma progression? Given the relative dearth of IDH mutations in GBM, perhaps these questions may be best approached in models of low-grade glioma. Finally, future considerations may also address whether genetic markers such as IDH correlate with access of drugs such as large antibodies to the brain, and in parallel whether such therapies act systemically or require penetration through the blood-brain barrier to treat tumors in the CNS.