Previous studies have reported that the use of radiotherapy (RT) following breast conserving surgery (BCS) had similar clinical outcomes when compared with that of mastectomy (1,2). The Early Breast Cancer Trialists’ Collaborative Group (EBCTCG), which performed a meta-analysis of 10,801 breast cancer patients’ data obtained from 17 randomized trials comparing RT with no RT after BCS, revealed that RT decreased the risk of locoregional and distant recurrences at 10 years, from 35.0% to 19.3%, and subsequently resulted in an increased survival of 3.8% at 15 years. RT also resulted in an absolute recurrence reduction of 15.4% (10 years, no RT vs. RT; 31.0% vs. 15.6%, P<0.00001), as well as an absolute mortality reduction of 3.3% (15 years, no RT vs. RT; 20.5% vs. 17.2%, P=0.005) in patients with lymph node (LN)-negative status (3). When analyzing the variables of clinicopathological features associated with recurrence in LN-negative patients, the authors demonstrated that the 10-year recurrence was approximately 10% after RT even in patients with T1 lesions or low-grade histology (3). These findings indicate that further investigations of potential markers associated with the radio resistance in LN-negative patients with early-stage breast cancer are warranted.

Although the EBCTCG study revealed that most patients with LN-negative early breast cancer benefited from RT owing to the decreased recurrence risk and modality, a substantial proportion of patients, including elderly women with T1 and estrogen receptor (ER)-positive invasive breast cancer who were treated with tamoxifen, did not develop local recurrence in the absence of RT (4). Chesney et al. (5) in an attempt to clarify the question of whether the effect of tamoxifen was equivalent to RT in elderly women with early breast cancer, reviewed four randomized trials that compared the administration of RT plus tamoxifen and tamoxifen alone in 2,387 women aged ≥70 years with T1-T2N0 breast cancer. They showed that RT significantly decreased local recurrence of breast [at 5 years, relative risk (RR), 0.18; 95% CI, 0.10–0.34] and minimally reduced axillary LN recurrence (RR, 0.28; 95% CI, 0.10–0.81) (6-9). However, the distant recurrence and overall survival (OS) were not significantly different between these two groups in these patients’ women (6-9). At 10 years of follow-up, the Toronto/British Columbia trial showed that adjuvant RT resulted in a risk ratio of 0.40 for breast recurrence (95% CI, 0.12–1.25) with 2.9% and 7.5% recurrence being observed from the total number of patients in the RT plus tamoxifen (4 of 135 cases) and tamoxifen alone groups (9 of 120 cases), respectively (8). These findings indicate that RT can be omitted in several elderly women with early-stage breast cancer (T1-T2N0) who received adjuvant endocrine therapy, after evaluating the benefits of RT mediated reduction of recurrence against its side effects.

Based on genes expression profiles and their association with prognosis, breast cancer can be classified into different molecular subtypes (10,11). After using immunohistochemistry and fluorescence in situ hybridization (FISH) techniques to assess the expression patterns of ER, progesterone receptor (PR), and human epidermal growth factor receptor 2 (HER2), the heterogeneity of breast diseases was categorized as follows: luminal A/B [hormone receptor (HR)+/HER2−, HR+, ER+, and/or PR+], luminal HER2 (HR+/HER2+), HER2 (HR−/HER2+), and triple-negative (HR−/HER2−) (12-15). After examining the Ki-67 index, in addition to ER, PR, and HER2 status, Cheang et al. proposed an immunohistochemical classifier, defining the luminal A subtype as HR+/HER2− with low Ki-67 levels (Ki-67 index <14%), and the luminal B subtype as HR+/HER2− with high Ki-67 levels (Ki-67 index ≥14%) (13,15).

To assess whether RT can be omitted after BCS in specific elderly patients with low-risk early-stage breast cancer, Liu et al. analyzed the ER, PR, HER2, CK5/6, epidermal growth factor receptor, and Ki-67 markers in tissue microarray (TMA) comprising of 501 cases obtained from the prospective Toronto/British Columbia trial (16). In their study, patients were divided into six molecular subtypes according to the expression patterns of the aforementioned six markers as follows: luminal A (n=265), luminal B (n=165), and the high-risk [luminal HER2 (n=22), HER2 enriched (n=13), basal-like (n=30), and triple-negative non-basal (n=6)]. Liu et al. showed that the 10-year ipsilateral breast tumor recurrence (IBTR) rates for luminal A, luminal B, and the high-risk subtypes were 5.2%, 10.5% and 21.3% (P<0.001), respectively (16). Following RT, the IBTR rate for the high-risk subtype was significantly decreased [hazard ratio (HR), 0.13] than both the luminal A (HR, 0.40) and luminal B (HR, 0.51) subtypes (16) (Figure 1). 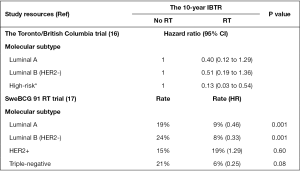 Recently, a 15-year follow-up by the Swedish Breast Cancer Group randomized trial (SweBCG 91 RT) involving 1,187 women with post-BCS T1-2N0M0 breast cancer randomized into whole breast RT or observation (stage II, all received adjuvant systemic therapy) groups revealed patients who received RT following BCS demonstrated lower IBTR (11.5% vs. 23.9%, P<0.001) and better recurrence-free survival (60.4% vs. 51.7%, P=0.0013) than those treated with only BCS (18). However, the OS was not significantly different between the two groups (RT vs. observation groups: 71.1% vs. 68.4%; P=0.68) (18). Furthermore, they also noted that clinicopathological features, such as grade, tumor size, and ER status, could not be used to identify whether patients could be omitted from undergoing RT (18). To further assess whether molecular subtypes of breast cancer were associated with radiosensitivity, Sjöström et al. correlated IBTR and breast cancer death (BCD) with the expression of ER, PR, HER2, and Ki-67 in TMA from 1,003 patients who had been enrolled in the SweBCG 91 RT trial (17). They showed that when compared with the observation group, RT significantly reduced the IBTR within 10 years of follow-up in cases of luminal A subtype (9% vs. 19%, P=0.001), luminal B subtype (9% vs. 19%, P=0.001), and triple-negative subtype (9% vs. 19%, P=0.001); in contrast, the IBTR for the HER2 subtype was not different between the RT (19%) and the observation (15%, P=0.6) groups (Figure 1) (17). Regarding the association between RT and BCD, only triple-negative tumors benefited from RT (HR, 0.35, P=0.06) (17). However, in triple-negative tumor and HER2 subtypes, the number of unbalanced cases and those detected by screening, age, tumor size, menopausal status, and adjuvant treatment with or without RT may influence the effect of RT in decreasing recurrence of breast cancer (17). For example, patients with HER2-positive breast cancer subtypes (45 cases from SweBCG 91 RT trial), had a relatively favorable prognosis despite not being treated with RT (17). The molecular analyses of several patients obtained from the SweBCG 91 RT have demonstrated that luminal A, luminal B, and triple-negative breast tumors are more sensitive to radiation, whereas HER2-positive tumors are relatively radio resistant.

Regarding the benefit of RT on the luminal A subtypes, Sjöström et al. showed that RT reduced the IBTR from 20% to 6% at 10 years in the low-risk group (ER-positive, N0, and age ≥65 years) (17), whereas Liu et al. showed that the 10-year IBTR for RT plus tamoxifen and tamoxifen only in the low-risk group (age >60 years, T1, and grade 1 or 2) was 1.3% and 5%, respectively (16) (Figure 1). The difference in the RT effect on IBTR between the two studies may be explained by the rare administration of tamoxifen (around 5% of the patients received tamoxifen) in the study by Sjöström et al. (17) when compared to all the patients receiving tamoxifen in Liu et al. (16) study, since adjuvant endocrine therapy may also facilitate decreased risk of recurrence (6-9,19). In addition, the decreased number of events of IBTR in clinical low-risk luminal A subtypes may also have attributed to decreasing the benefit from RT in the study by Liu et al. (16). These findings indicate that adjuvant endocrine treatment, such as tamoxifen and aromatase inhibitors, may be considered as an alternative to RT in elderly women with clinical low-risk luminal A-like breast tumors. On the other hand, RT should be considered as an alternative therapy to decrease the risk of breast cancer recurrence in elderly women whose clinical low-risk luminal A subtype breast tumors are either unsuitable for or unable to tolerate endocrine therapy.

Based on the results from the studies established by Liu et al. (16) and Sjöström et al. (17), as well as from retrospective studies, we speculated that among women with T1-2N0 breast cancer (1), the luminal A breast cancer subtype seems to be associated with radiosensitivity in high-risk patients (age ≤65 years, grade 2 to 3) and those not treated with endocrine therapy (2), and triple-negative breast cancer seems to be highly benefited from RT. However, further studies investigating the association between luminal A and triple-negative breast cancer subtypes and radiosensitivity are warranted. Indeed, there are several ongoing prospective trials assessing whether RT can be omitted in the clinical low-risk luminal A breast cancer subtype to prevent effects on OS. For example, a prospective, single-arm clinical trial by the Ontario Clinical Oncology Group, is assessing whether the local recurrence is less than 5% in women with 55 years of age or older, with pT1N0, grade 1 to 2, and luminal A breast cancer subtype who received BCS and endocrine therapy without RT (Clinicaltrials.gov identifier NCT01791829). To avoid potential under-treatment in women with T1-2N0 and triple-negative breast cancer, a prospective clinical trial is needed to assess the effect of regional lymph nodal irradiation plus whole breast RT in post-BCS patients or RT in post-mastectomy patients.

Funding: This study was supported by research grants MOST 104-2314-B-002-152-MY3 from the Ministry of Science and Technology, Taiwan.

Conflicts of Interest: Both authors have completed the ICMJE uniform disclosure form (available at http://dx.doi.org/10.21037/tcr.2017.11.09). The authors have no conflicts of interest to declare.