Precision cancer medicine using molecular targeted therapies is a cornerstone for cancer therapy during the last two decades. However, the drug resistance regardless of primary or acquired one is still a big hurdle which should be overcome to improve cancer therapy and its outcomes. In this regard, lung cancer is a prototype. Although it is the leading cause of cancer death worldwide, fortunately, treatment for lung cancer has improved dramatically owing to advance of molecular targeted therapies and immunotherapeutic agents (1). Notwithstanding the advances, KRAS mutations are still troublesome. Actually, they have been known well for a long time as a common known oncogenic driver in lung cancer, accounting for approximately 30% of cases. But, unlike EGFR and ALK inhibitors, known as of their great successes. attempts to targeting KRAS mutations have failed due to issues related to structural characteristics and downstream signal pathway diversity, leading that KRAS mutation is yet known “undruggable” target (2). KRAS mutations leads to ongoing provocation of the two downstream pathways, RAF/MEK/ERK/RSK and PI3K/AKT/mTOR pathways and induces tumorigenesis via continuous oncogenic activation (3). Indeed, the two pathways have already been known to have profound effects on the regulation of apoptosis by the post-translational phosphorylation of apoptotic regulatory molecules including forkhead box transcription factor class O (FOXO), glycogen synthase kinase 3 (GSK3), Bcl-2-associated death promoter (BAD) and caspase-9, associated with tumorigenesis and drug resistance (4).

The simultaneous activation of PI3K/AKT/mTOR and RAF/MEK/ERK/RSK signaling explains why single-pathway inhibition among the two pathways is not efficient, suggesting the rationale for the need of inhibition of both pathways. Although a number of research teams still remain focusing on developing inhibitors directly targeting KRAS (5,6), more widely accepted strategy, however, is dual-targeting the two downstream components of RAS signaling, RAF/MEK/ERK/RSK and PI3K/AKT/mTOR pathways. In addition, tumors harboring a different KRAS mutation show diverse or different responses to inhibitors targeting major downstream molecules, MEK, PI3K, RAF, ERK, AKT, etc. For example, although in preclinical studies various tumor types harboring a KRAS mutation including non-small cell lung cancer (NSCLC) respond well to PI3K inhibitors (7), blocking PI3K/AKT/mTOR pathway is not sufficient or even intrinsically resistant in cancer patients. A number of researches have proved that PI3K inhibitor resistance begins via beta-catenin (8) and RSK activation, and induces bypass activation of downstream components of the RAF/MEK/ERK/RSK pathway (9). MEK inhibition also showed good effects in KRAS-mutant NSCLC (10) and BRAF-mutant melanoma (11), but a part of patients did not benefit from MEK inhibition because of intrinsic resistance as well. The representative mechanism of intrinsic MEK inhibitor resistance was EGFR and PI3K/AKT bypass activations (12).

Many efforts have been tried to overcome intrinsic resistance to either PI3K or MEK inhibitors using combination strategies in KRAS-mutant tumors. Dual targeting both MEK and PI3K to simultaneously inhibit the both RAF/MEK/ERK/RSK and PI3K/AKT/mTOR pathways showed a potent anticancer effect in vitro and in vivo in NSCLC harboring KRAS mutations (13). However, unfortunately, in recent clinical phase I/II studies, the combination blocking both PI3K/AKT/mTOR and RAF/MEK/ERK/RSK pathways was not or poorly tolerated in patients with multiple myeloma and solid tumors due to its toxicities such as diarrhea, rash, fatigue, vomiting, and so on (14). In addition, in another recent phase I/Ib and II studies of combination of trametinib, MEK inhibitor and either omipalisib, PI3K inhibitor or afuresertib, AKT inhibitor was also poorly tolerated as well (15). In addition to the toxicities, combinations do not seem to translate into better clinical outcomes with low disease control rates of about 20% (14). Due to limitation of combination treatments using already exiting agents, a novel combination treatment using HSP90 inhibitors was interestingly suggested instead of combinations directly targeting both PI3K and MEK (16,17). Combinations of HSP90 inhibitor showed good anti-cancer effect in NSCLC harboring diverse KRAS mutations, which seemed to effectively overcome intrinsic PI3K inhibitor (17) or MEK inhibitor (16) resistance with less toxicity compare with previous combination treatment. However, these approaches should be evaluated and proved in clinical trials.

Galectin-3 is an endogenous lectin and ubiquitously expressed in various mammalian tissues and associated with the following cell biological progresses: cell adhesion, cell activation, cell growth, differentiation, cell cycle, and apoptosis (18). In addition, a number of past researches showed that galectin-3 has been proved to be involved in inflammation, fibrosis and heart disease as well as cancer (18). It has an affinity for beta-galactosides and it cause antimicrobial activity against bacteria and fungi. This affinity regulates the binding between Gal-3 and many glycoproteins or glycolipids in the cell membrane components, such as integrins, including integrin αvβ3 (19), epidermal growth factor receptor and transforming growth factor beta receptor. This well-known ligand of Gal-3 present that Gal-3 has a crucial role in tumor progression. Therefore, since 2005, Gal-3 has been identified as a novel therapeutic target in various cancers due to the unique structure and various interaction properties of the molecule (20). Actually, the diverse changes in cellular localization of galectin-3 have been reported in various tumors and variable galectin-3 expression can affect cancer cell growth and differentiation, chemo-attraction, apoptosis, immunosuppression, angiogenesis, adhesion, invasion and metastasis (21). In particular, this protein encourages tumor transformation and enhances the tumor adhesion and metastatic spreading of tumor. It can also regulate immune activities and supports evasion of tumor from the immune system as well as promote angiogenesis. In 2017, it is coming into spotlight as potent novel target for treatment KRAS-mutant tumor with integrin αvβ3 (22). Integrin αvβ3 is a type of integrin that is a receptor for vitronectin, consisting of two components, integrin alpha V and integrin beta 3 (CD61). Furthermore, it is a receptor for phagocytosis on macrophages or dendritic cells (23). According to this research group, the binding between galectin-3 and integrin αvβ3 drives KRAS addiction via micropinocytosis for nutrient uptake in lung cancer harboring KRAS mutations (Figure 1). In addition, they found that this KRAS addiction counteracts the effects of oxidative stress and make this tumor maintain low mitochondrial reactive oxygen levels. Indeed, it has been spotlighted as potent target for intractable cancer in earnest from 2014 to overcome EGFR-TKI resistance, in which galectin-3 bound to integrin αvβ3, induced acquired EGFR-TKI resistance via NF-kB activation and so it was suggested as the combination treatment strategy of NF-kB inhibitor with EGFR-TKI (24). Recently, Gal-3 inhibitor, RN1, showed good effect in pancreatic cancer cells (25) and they also showed that another Gal-3 inhibitor, GCS-100, has dramatic ant-cancer effect in KRAS-mutant tumor cells and patient-derived xenograft (PDX) tumor model expressing integrin αvβ3. This inhibitor not only prevents the tumor cells from engulfing nutrients via micropinocytosis but also increases reactive oxygen species (ROS) levels in 3D culture, xenograft model and PDX tumor model (22). 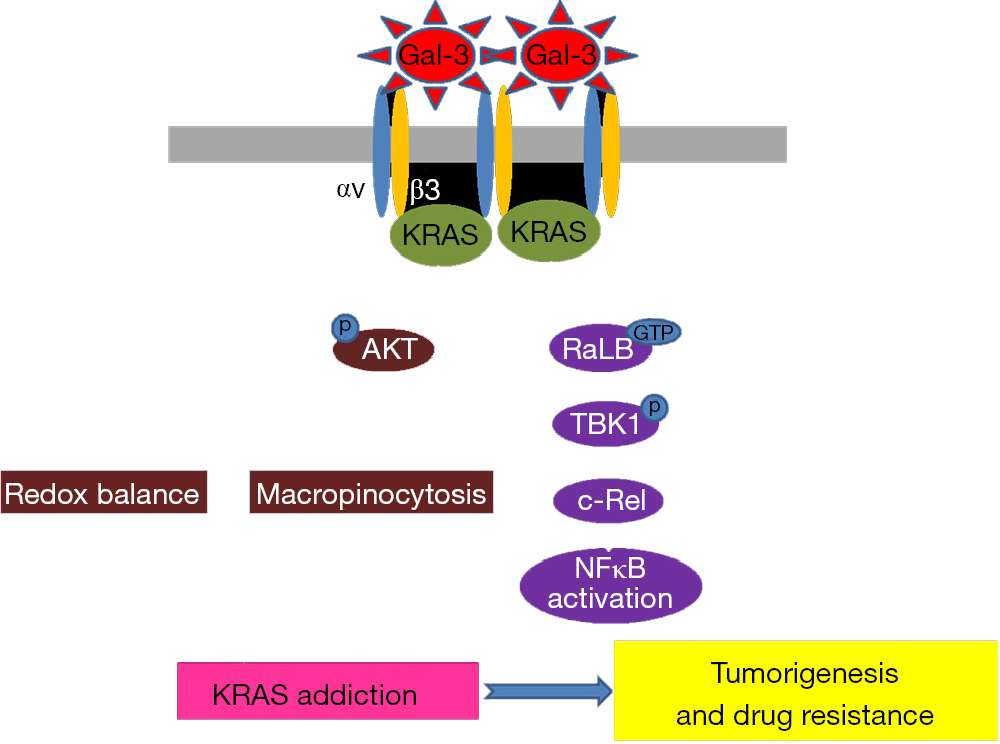 In conclusion, KRAS mutant is known as undruggable and one of the overcoming strategies is combination treatment using blocking molecules in both downstream pathways of KRAS. However, there are still many hurdles targeting KRAS mutations. In this respect, inhibition of interaction between Gal-3 and integrin αvβ3, upstream molecules, is a simple but novel and can be a promising therapeutic strategy for KRAS mutant cancers patients.