Adrenocortical carcinoma (ACC) is an aggressive and extremely rare malignancy with an estimated incidence of 0.7–2.0 cases/million/population/year (1).

The mainstay of treatment is surgery, however the majority of radically resected patients are destined to relapse, often with distant metastases (2,3). On these bases, there is a strong rationale for the use of adjuvant therapy in ACC patients. Mitotane is the only drug approved by international pharmaceutical agencies for treatment of advanced ACC (1), but its use in adjuvant setting remains a matter of debate. The reason is that no data on randomized prospective studies, testing the efficacy of adjuvant mitotane, have been published up to now. Therefore, the evidence is based on retrospective studies, the most important of which is a relatively large retrospective case-control study reporting that patients treated with adjuvant mitotane had a significantly longer recurrence-free survival (RFS) and overall survival (OS), compared with two independent groups of patients left untreated after surgery (4). Recently, the same group has updated the follow-up of these cohorts of patients with almost 10 years of additional observation, confirming that adjuvant mitotane treatment is associated with a significant benefit in terms of RFS regardless of the hormone secretory status (5).

Notwithstanding the limited evidence, adjuvant mitotane therapy was recommended by a panel of international experts in radically resected ACC patients with moderate/high risk of relapse (6) and it was included as a possible option in currently available international guidelines (7).

In this scenario, an accurate risk stratification is of paramount importance in order to select patients that deserve to be addressed to adjuvant therapy and avoid a toxic therapy in those who have a consistent chance of cure with surgery only.

The power of these parameters, taken together, in predicting the outcome of every single patient, however, is limited and new prognostic factors are needed. Several molecular markers like matrix metalloproteinase type 2 (14), glucose transporter GLUT1 (15), BUB1B and PINK1 (16) have been identified to be associated with patient prognosis, but none of them is yet validated. The transcription factor steroidogenic factor-1 (SF-1), that is currently adopted in the diagnosis of ACC, has been demonstrated to have a crucial role in the development of adrenal glands and in the control of steroidogenesis. The results of a cooperative study showed that strong SF-1 immunostaining in primary ACC significantly correlated with poor survival. Similar results were obtained in an independent cohort using RNA analysis (17).

A recent paper by Sbiera et al. (18), identified VAV2, a guanine nucleotide exchange factor (GEF) for small GTPases of the Rho family, as a new prognostic factor in ACC. VAV2 in ACC was previously shown to be induced by SF-1 overexpression and has an essential role in driving tumor cell invasion (19).

VAV2 expression directly correlated with Ki67 labelling index (LI) and both markers were independently associated with PFS and OS after adjustment for age, sex and disease stage in multivariate analysis.

Are these data relevant for clinical practice? In this study, ACC patients with low VAV2 and low Ki67 expression were undoubtedly at limited risk of disease recurrence or death, however the proportion of patients in this subgroup with disease recurrence or death after 5 years was about 35%. This suggests that VAV2 and Ki67 alone are unable to identify a patient subset with very low chance of recurrence that are potentially candidate to be followed up only without the need of any adjuvant therapies. We believe that VAV2 should be combined with additional prognostic markers, in order to demonstrate whether it can be helpful for a definition of a subset with a very good prognosis.

For better understanding the biological significance of VAV2 in ACC it is helpful to discuss the role of this marker in other malignancies.

The Rho family GTPases are attracting the interest of researchers, since they are critical regulators of cellular functions that play important roles in cancer progression (20). Nearly all Rho GTPases act as molecular switches that cycle between GDP-bound (inactive) and GTP-bound (active) forms (Figure 1). 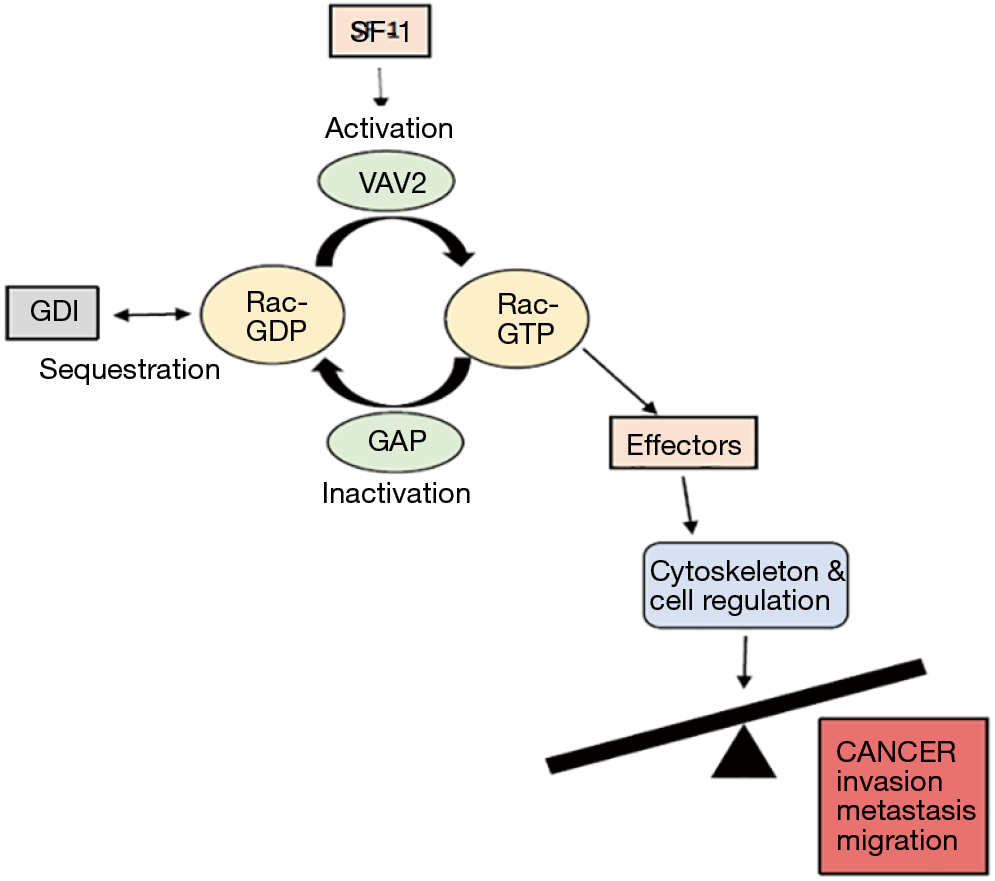 Figure 1 Steroid factor 1/VAV2 axis in adrenocortical carcinoma (ACC). RhoGTPases are involved in regulatory pathways as organizers of the cytoskeleton and regulators of cell growth. Their activation is promoted by guanine nucleotide exchange factors GEFs (like VAV2) through facilitating the exchange from GDP to GTP. On the other hand, GTPase-activating proteins (GAP) inactivate Rho proteins by accelerating their intrinsic rate of GTP hydrolysis. SF-1 can activate VAV2 leading to the activation of downstream effectors that mediate ACC proliferation, survival, invasion and metastasis.

Activation is promoted by GEF (like VAV2) responsible for GDP dissociation, thereby facilitating the exchange for GTP. On the other hand, GTPase-activating proteins (GAP) inactivate Rho proteins by accelerating their intrinsic rate of GTP hydrolysis (Figure 1).

Several Rho GEFs have been found to be mutated or aberrantly expressed in human cancer, among them VAV2 is ectopically expressed in the human ovarian tumor cell line SK-OV-3.ip, human breast cancer, head and neck squamous cell carcinoma (HNSCC) and lung cancer (21). In breast cancer, VAV2 was shown to activate the prolactin receptor that contributes to the progression and motility of the tumor (22). In HNSCC cells, VAV2 is one of the mechanisms underlying the elevated activity of Rac1 and facilitating increased invasion (23).

The known mechanism of VAV2 activation in cancer consists in the phosphorylation of regulatory tyrosine residues by either transmembrane or cytosolic oncogenic kinases (24). In HNSCC, as example, VAV2 is significantly enhanced by the stimulation of the epidermal growth factor receptor (EGFR) (23). SF-1 is instead a VAV2 stimulator in ACC.

Since SF-1 has a pivotal role in the stimulation of both steroidogenesis and cell proliferation, as previously mentioned, is VAV2 stimulation a mechanism by which SF-1 enhances ACC aggressiveness?

This is in our opinion an important question in order to understand the role of SF-1 on the biology of ACC. If the answer is yes then the prognostic role of SF-1 could potentially disappear after adjusting for VAV2 expression. The authors did not do this analysis in their paper and in our opinion this issue should be explored in the future.

In conclusion, VAV2 is a promising new independent prognostic factor for ACC but the data provided up to now are insufficient to recommend VAV2 as a new prognostic marker and the results obtained by Sbiera et al. (18) deserve validation. The combination with Ki67 could allow a better definition of a patient subset with good prognosis, but the patient subset with both low VAV2 expression and low Ki67 LI in the Sbiera et al. study still maintain a relevant risk of relapse and death and can potentially benefit from adjuvant mitotane.

Finally, Rac hyperactivation was found to be associated with resistance of malignancy to chemotherapeutic agents, such as cisplatin (25), that is commonly used in ACC, and molecular target therapies (20). This pathway is also involved in the suppression of antitumor immune response (20). All these data suggest that the VAV2/rac1 axis, beside its prognostic role, could be a negative predictive factor of efficacy of antineoplastic therapies and a potential new attractive therapeutic target.

We gratefully acknowledge the support and generosity of FIRM Onlus Foundation, Cremona, Italy.