Because of advances in cancer management, life expectancy of patients suffering from a malignant disease is getting longer (1-3). Simultaneously, chances of developing distant metastases increase as well. The skeletal system is the third most frequent site of cancer metastases after lung and liver (4). Approximately one third of all cancer patients develop bone metastases (5). Concerning the distribution of sites of bone metastases, almost 50% of these are located within the spinal column of which 60% to 80% are situated in the thoracic spine, 15% to 30% in lumbar spine, and less than 10% in cervical spine (4).

Presence of bone metastases expose the patient to a risk of various complications related to these, e.g., pain, fractures, neurological dysfunctions and thus reduced quality of life.

At present, external radiotherapy is considered as one of the most widely used treatment options regardless of the radiation technique applied (4). Another therapeutic option is the surgery which may consist of different approaches. Concerning the spinal column impairment, techniques such as laminectomy, vertebroplasty or kyphoplasty are available. These were reported to be as efficient in pain relief as radiotherapy (6), however there was no improvement in life expectancy observed after the surgery alone (7). On the other hand, in some cases, such as in spinal cord compression induced by metastatic vertebra, irradiation alone does not provide immediate vertebra stabilization and only delayed pain relief is observed (8).

For this reason, the treatment approach combining surgery and radiotherapy seems as an effective alternative for patients with bone metastases. Various methods of post-operative irradiation are possible. However, they may still take certain time because of a required hospitalization and/or delay resulting from a following post-operative external radiotherapy.

Very recently, a novel treatment approach called Kypho-IORT was developed by a German team (9,10) combining a relatively less invasive surgery (kyphoplasty) and intraoperative radiotherapy (IORT) that consists of a single radiation dose delivered directly into the vertebra body, i.e., to the seat of metastasis. Indeed, the study of Schneider et al. investigated the number of patients who could potentially undergo an IORT during kyphoplasty (10). They evaluated CT images of patients who presented for irradiation of spinal cord metastases. A total number of 897 vertebral bodies have been evaluated by radiation oncologists and surgeons in order to classify them into groups regarding the applicability of Kypho-IORT. Finally, 23-34% of all patients eligible for percutaneous spinal radiotherapy for vertebral metastases could be considered as candidates for the Kypho-IORT.

Since this technique depends on the transpedicular approach, only vertebrae inferior to the third thoracic are eligible for such treatment. Regarding the other indications that should be respected these are the following: osteolytic metastatic lesion, vertebra with a risk of fracture or already developed fracture. The situations that do not permit the Kypho-IORT are a presence of spinal cord compression and/or cortical break of the posterior vertebra wall.

The Intrabeam® system is the device used for dose delivery during the IORT. It represents a miniature 50 keV X-ray source that consists of an electron gun, accelerating unit, two pairs of bending magnets, and a gold target. Various forms of applicators are available at present, e.g., spherical, flat, etc. For the purpose of Kypho-IORT, a special needle applicator has been designed. According to the form of applicator chosen, an Intrabeam® system may be applied in different clinical indications such as early-stage breast cancer in women, malignant skin lesions, etc.

The Regional University Hospital in Brest, France, possesses an Intrabeam® device since April 2011. Up to this day, already 65 female patients were treated using this intraoperative radiation system with spherical applicators for an early-stage breast cancer. As for Kypho-IORT, two patients were already treated by this novel combined treatment. In this paper, we introduce these two cases of our very first experiences with Kypho-IORT at our institution.

A 63-year old female patient with a stage IV adenocarcinoma of right inferior pulmonary lobe with pleural effusion and brain metastases presented a bone metastasis of lumbar vertebra L4. She has already been irradiated for her brain metastases by a whole brain radiotherapy (30 Gy in 10 fractions). Subsequently, different chemotherapy regimens were introduced. First, she received nine cures of cisplatine-pemetrexed (Alimta®). Because of the disease progression, a second line therapy by erlotinib (Tarceva®) was proposed. Finally, because of continuing disease progression the third line treatment by docetaxel (Taxotere®) was proposed.

This patient, whose Karnofsky index was 70%, suffered for an intense lumbar vertebra pain with a visual analogue scale (VAS) score of 7/10. A continuous morphine intake was required for pain relief. Bisphosphonate treatment has never been introduced into the management of this patient. No neurological symptoms were present throughout the whole pain management. In order not to interrupt docetaxel regimen, a Kypho-IORT was proposed for this patient. Computed tomography (CT) and magnetic resonance imaging (MRI) showed presence of a lytic lesion of L4 vertebra with an early cortical break of the posterior wall without spinal cord compression as seen in Figure 1.

Figure 1 Axial (A) and sagittal (B) magnetic resonance imaging (MRI) images of metastatic lesion of L4 vertebra three weeks before the Kypho-IORT.

The Kypho-IORT procedure itself was performed according to a standard scheme as already described by Wenz et al. (9). Patient was operated under general anaesthesia in a dedicated operating room with leaded walls. A bipedicular approach was chosen using metallic sleeves (5 mm inner diameter and 6 cm length) to guide the X-ray source Intrabeam® (Carl Zeiss Surgical, Oberkochen, Germany). The position of both guiding sleeves was verified by biplanar X-rays. If this was correct, a needle applicator was placed in the tube of the miniatrure X-ray generator and inserted carefully through one of these sleeves according to the lateralization of the metastatic lesion. Outer diameter of the needle applicator was 4.4 mm.

A total dose of 8 Gy in 5 mm distance from the applicator surface was delivered during approximately 93 seconds. This dose corresponds to a dose of 8 Gy at 8 mm distance from isocenter which is placed at the tip of the X-ray source. In order to take the characteristics of the needle applicator in consideration, transfer values needed to be taken into account. Thus the dose finally prescribed corresponds to 5.8 Gy to be delivered in 8 mm distance to the isocenter. Once the irradiation was over, the device was removed from the vertebra and a kyphoplasty ballon (KyphX, Kyphon Inc, Sunnyvale) was inserted and inflated inside. After the deflation, it was removed and polymethylmethacrylate (PMMA) cement (KyphX, Kyphon Inc, Sunnyvale) was injected through both transpedicular approaches. Two and 1.5 mL of PMMA cement were injected to the left and right approach respectively. Finally, the sleeves were extracted and skin closure performed by a simple skin suture. The whole procedure lasted for two hours and 35 minutes in our conditions.

Forty eight hours after the Kypho-IORT, a control X-rays diagnostics was performed to verify the absence of possible post-operative complications, e.g., cement leakage. As shown in Figure 2, in this patient, satisfying X-ray results were obtained without any signs of cement leakage. 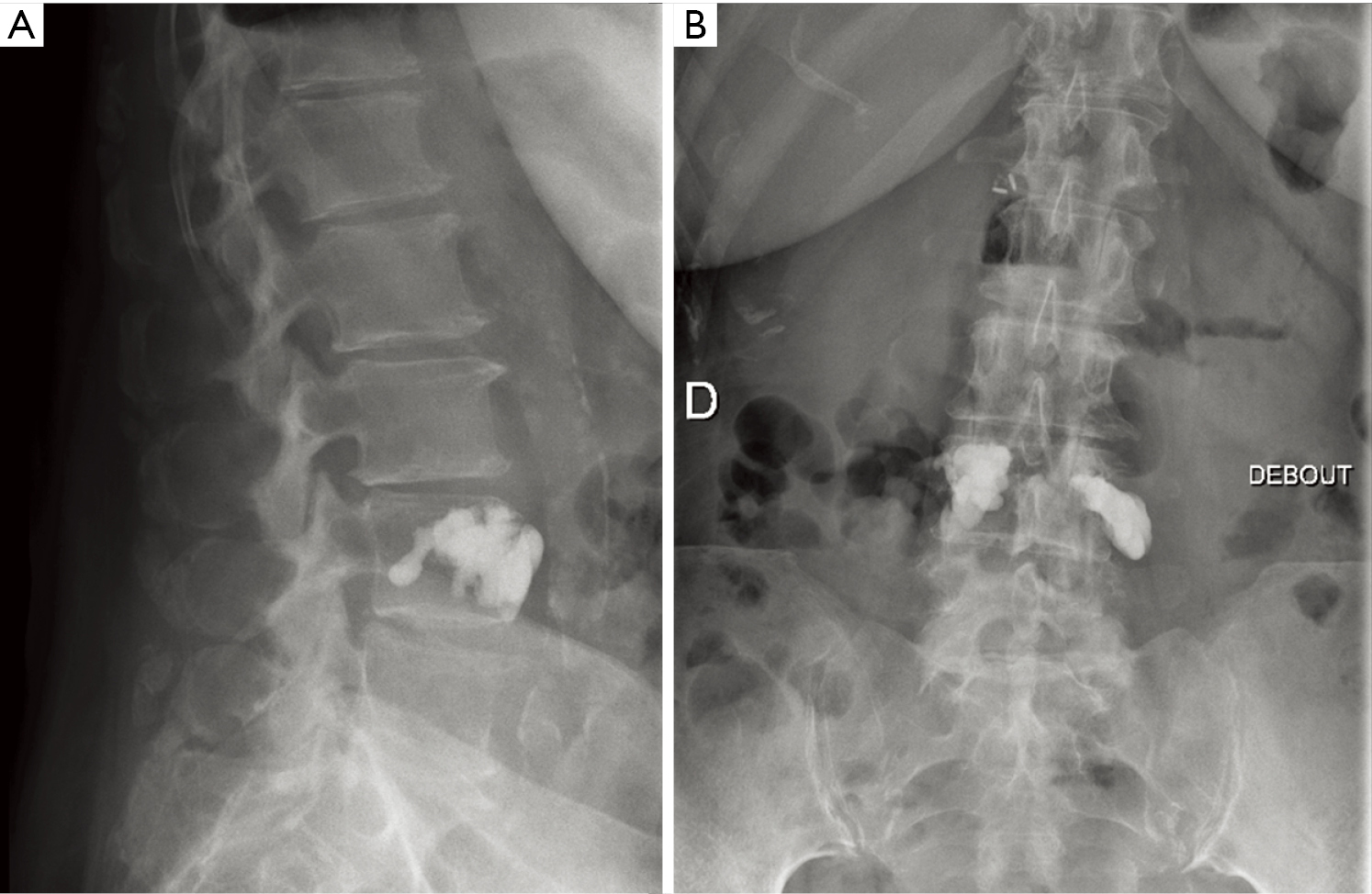 Figure 2 Lateral (A) and posteroanterior (B) view of X-ray control preformed 48 hours after the Kypho-IORT.

The patient was discharged from the hospital 24 hours after the procedure and her immediate post-operative VAS score was 3/10. Morphine intake could be decreased already one week after the treatment and she continued with her docetaxel therapy without any further delay.

At 5-month follow up she was still painless, no radiological progression was observed with the treated L4 vertebra. Otherwise, liver metastases appeared later on.

A 76-year-old female patient with history of ductal invasive right breast carcinoma (grade 2, hormone receptors expression, ErbB-2 negative) was consulted for persisting pain in lumbar region. In 2003, the initial breast tumour diagnosis was done. She underwent a breast conserving surgery followed by an external whole breast irradiation and hormonal therapy by inhibitors of aromatase during five years. Meanwhile, in 2004, an endometrial cancer of stage I was detected and surgery was the only treatment performed. In December 2012, first painful bone metastases were discovered and the patient received an analgesic external radiotherapy to the L4, L5, and sacrum region (30 Gy in 10 fractions). The radiotherapy was followed by reintroduction of inhibitors of aromatase, letrozole (Femara®). Despite this irradiation, the patient continued to suffer from an intensive lumbar pain and thus a new CT was performed. This showed a presence of mixed osteoblastic and osteolytic lesion of L2 vertebra (see Figure 3). The clinical patient’s Karnofsky index was 70% and her VAS score was 8-9/10 requiring high doses of oxycodone intake. No neurological symptoms were noticed. Four months before Kypho-IORT the patient was given one injection of bisphosphonates (pamidronate of sodium) because of symptomatic hypercalcemia. This treatment was continued later on using a different molecule. 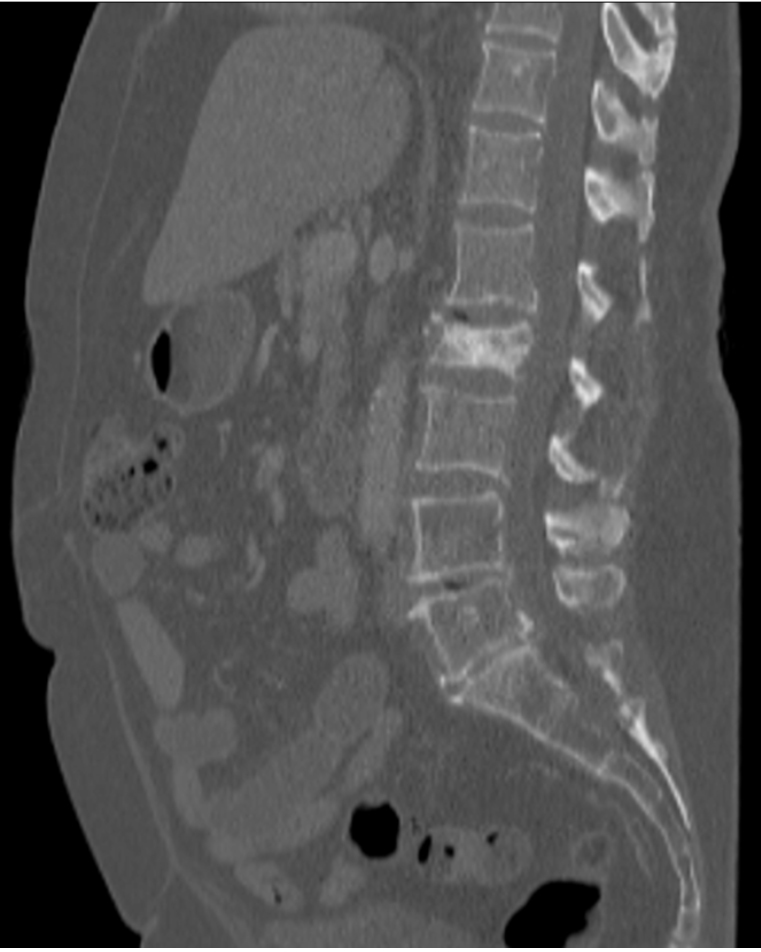 This patient was eligible for Kypho-IORT. The treatment procedure was performed as described in the case report 1. The volumes of the PMMA cement corresponded to 2 mL through the left pedicular approach and 1.5 mL through the right one. The whole procedure lasted for 2 hours and 15 minutes. The control X-ray examination done 48 hours after the surgery has revealed an anterior cement leakage as demonstrated in Figure 4. This did not induce any particular symptomatic complications for the patient, though. She could be discharged from hospitalization 24 hours after the surgery with an improved clinical status and a pain evaluated to VAS score of 3/10. The doses of oxycodone could almost immediately be reduced by half. 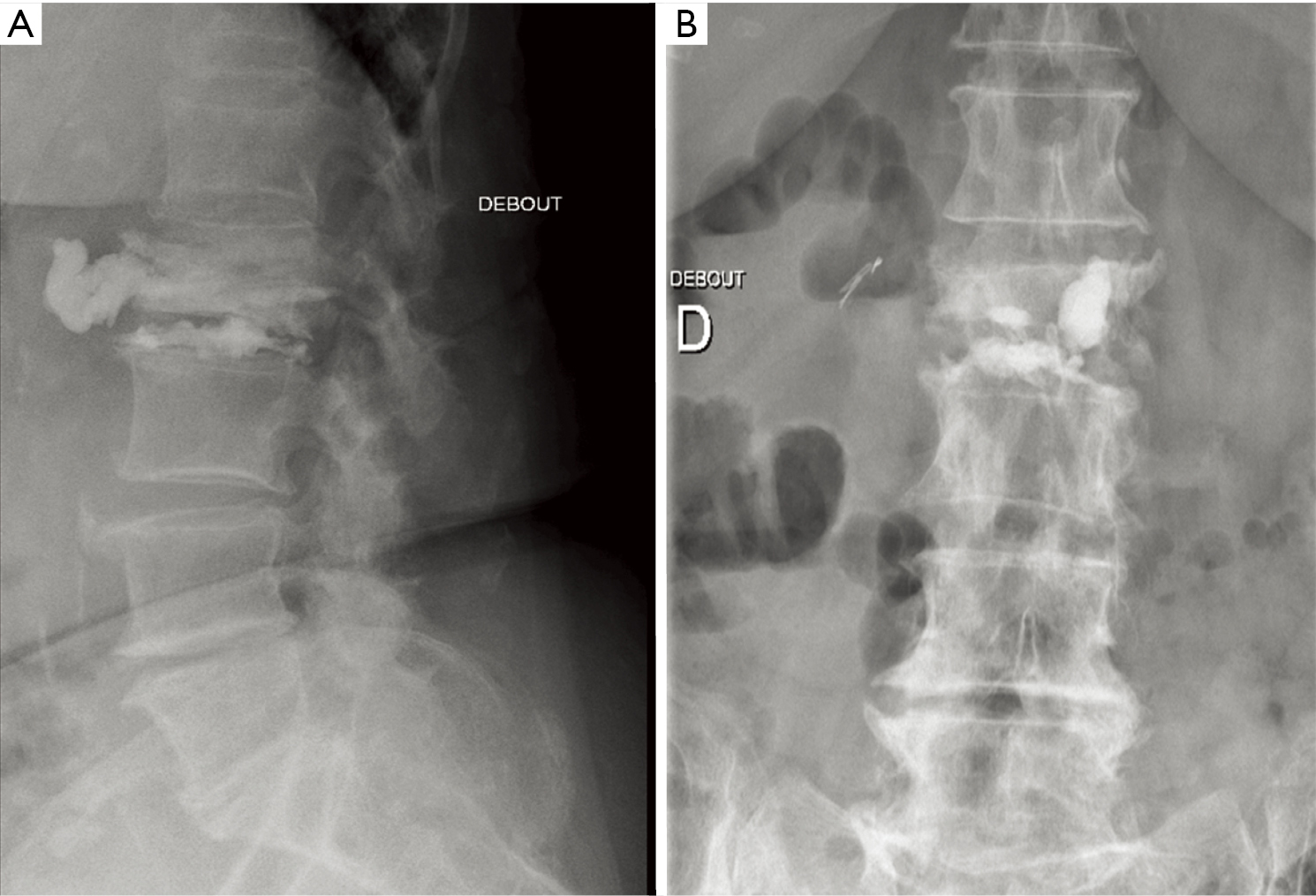 Figure 4 Lateral (A) and posteroanterior (B) view of X-ray control preformed 48 hours after the Kypho-IORT.

At 1-month follow up, the patient was still painless within the treated region. However, other distant bone metastases appeared in ribs. A treatment by bisphosphonate (denosumab) was introduced at that moment.

Metastatic cancer reduces the patient life expectancy and thus a palliative, e.g., analgesic, treatment should be performed at the same time as short and effective as possible in order to reduce the hospitalization time of these patients. At present, bone metastases management is still of a great interest since these appear during the course of a cancer disease in almost every third oncological patient. Majority of bone metastases are developed within the spinal column. Depending on the bone metastasis site the treatment approaches may vary. One of the most effective therapies remains surgery, e.g., percutaneous vertebroplasty or kyphoplasty. This one allows an immediate stabilization of vertebra, and pain relief (11-13). However, in order to sterilize the metastatic disease inside the vertebra a further irradiation is required. For this purpose, a novel intraoperative irradiation, Kypho-IORT, using Intrabeam® system has been established. It permits a delivery of unique high radiation dose intraoperatively into the vertebra body prior to performance of a kyphoplasty. This will thus reduce the number of visits in radiotherapy center and ensure a better quality of life. Another advantage of Kypho-IORT is the small radiation impact on the spinal cord because of a steep dose gradient in the vertebral body. Indeed, according to the study of Schneider et al. (10), estimated maximum dose in spinal cord was 3.8 Gy if the total prescribed dose into the vertebra was 8 Gy.

At present, only vertebrae below third thoracic are eligible of Kypho-IORT because of transpedicular approach requirement. Cervical pedicles are too small and the vertebral arteries are in close proximity (14).

According to the possible complications, a cement leakage has been already described within the literature. It may lead to several severe complications such as symptomatic pulmonary cement embolism. Rates of the leakage remain however low (15).

Several studies have demonstrated that there may be a reduced stabilizing potential of single-dose radiotherapy because of a reduced recalcification process especially for fractures. However, the accurate biological impact as well as long-term efficacy of this treatment needs to be yet explored.

Meanwhile, Kypho-IORT seems to be a feasible treatment technique for vertebra metastases with relatively satisfying outcomes regarding the pain relief in patients treated to this day. Still, it requires a well trained and organized staff and further clinical experience.

Ethical Statement: Written informed consent was obtained from all patients and is available for review by the Editor-in-Chief of this journal.