Esophageal cancer (EC) is the eighth most serious malignancy that affects human health (1), and the majority of first time patients are diagnosed with advanced esophageal carcinoma. One investigation into this issue discovered that 455,800 new esophageal cancer cases and 400,200 deaths occurred in 2012 worldwide, while the incidence of esophageal cancer varied internationally by more than 21-fold (2); eastern Asia, and eastern and southern Africa have the highest ratio and West Africa has the lowest ratio. Although treatment is improving, the prognosis of esophageal cancer is still poor, and the 5-year overall survival (OS) rate is about 15–34% (3,4). Preoperative chemoradiation (CRT) is still the most popular treatment model (5,6). Squamous cell carcinoma (SCC) and adenocarcinoma (AC) are the two main histological subtypes of EC (7). It has become clear that there are geographic variations in the histological subtypes of EC, with esophageal AC being more prevalent in many of the more developed countries, and esophageal SCC predominating in eastern Asia and Africa (8,9).

In this study, we have collected more RCTs to clarify the OS of preoperative CRT versus SA, while using progression-free survival (PFS) and disease-free survival (DFS) to measure the quality of patients’ life with esophageal cancer. Meanwhile, we have also compared the effectiveness and safety between different histology types of esophageal cancer, and used indirect comparison methods to compare SCC and AC in preoperative CRT.

RCTs with preoperative CRT for esophageal cancer published in PubMed, Cochrane Library, Embase and Web of Science between January 1990 and December 2017 were identified through a systematic search. The search strategy of PubMed was as follows in Figure S1.

Supplementary search strategy of PubMed was as follows in Figure S2.

The following criteria were used for study inclusion: (I) RCTs that compared preoperative CRT with SA; (II) no previous treatment; (III) esophageal or gastro-esophageal junction cancer (no matter what kind of histology); (IV) for studies with overlapping patients, the most recent or completed study was chosen. The exclusion criteria were as follows: (I) papers without any relevant outcomes that could be extracted for analysis; (II) papers that were not published in English or Chinese; and (III) case reports, abstracts, conference reports, reviews and reports of experiments.

First, two independent reviewers (WJ Ma and QN Zhang) read the title and abstract to determine which articles needed to be read in full. Second, the full text was downloaded. Finally, the articled was checked for inclusion according to the inclusion criteria described above. If reviewers could not reach consensus about an article, it was discussed with or decided by a third reader (XH Wang).

For each included study, the following information was extracted using a standard form: first author, year of publication, country, chemotherapy schedule, radiotherapy schedule, sequence, pathology, and the total sample of the experimental group and the control group.

The primary outcome was the hazard ratio (HR) and 95% confidence interval (95% CI) of OS. Some data were calculated from the data given in the original research. Secondary outcomes were PFS and DFS.

Evaluation of heterogeneity and publication bias

The heterogeneity assumption was evaluated with a chi-square-based Q-test. A P value ≥0.10 for the Q-test indicated a lack of heterogeneity among studies and thus a fixed-effect model was then used, otherwise a random-effect model was performed. Begg’s and Egger’s test were performed to explore publication bias when applicable (the number of included studies no less than 10 for 1 outcome).

A total of 1,450 published studies were identified. Among them, 16 systematic reviews were adopted, and finally, 15 studies, published from 1994 to 2015, comprising 2,250 patients, were selected for the primary analysis (Figure 1). Nine studies are about SCC alone, one RCT is about AC, and the remaining 6 studies include both patients with esophageal AC and SCC (Table 1). 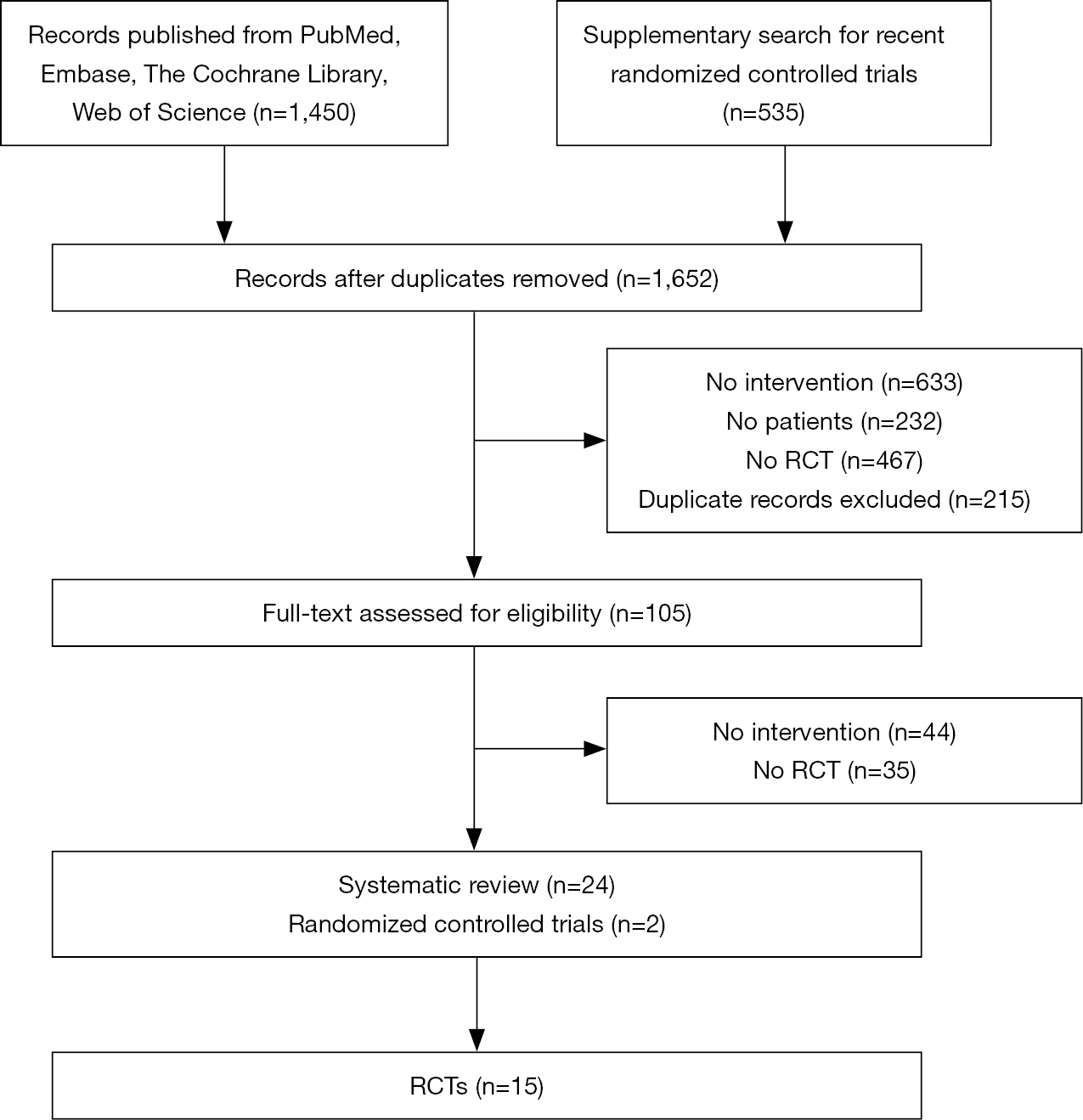 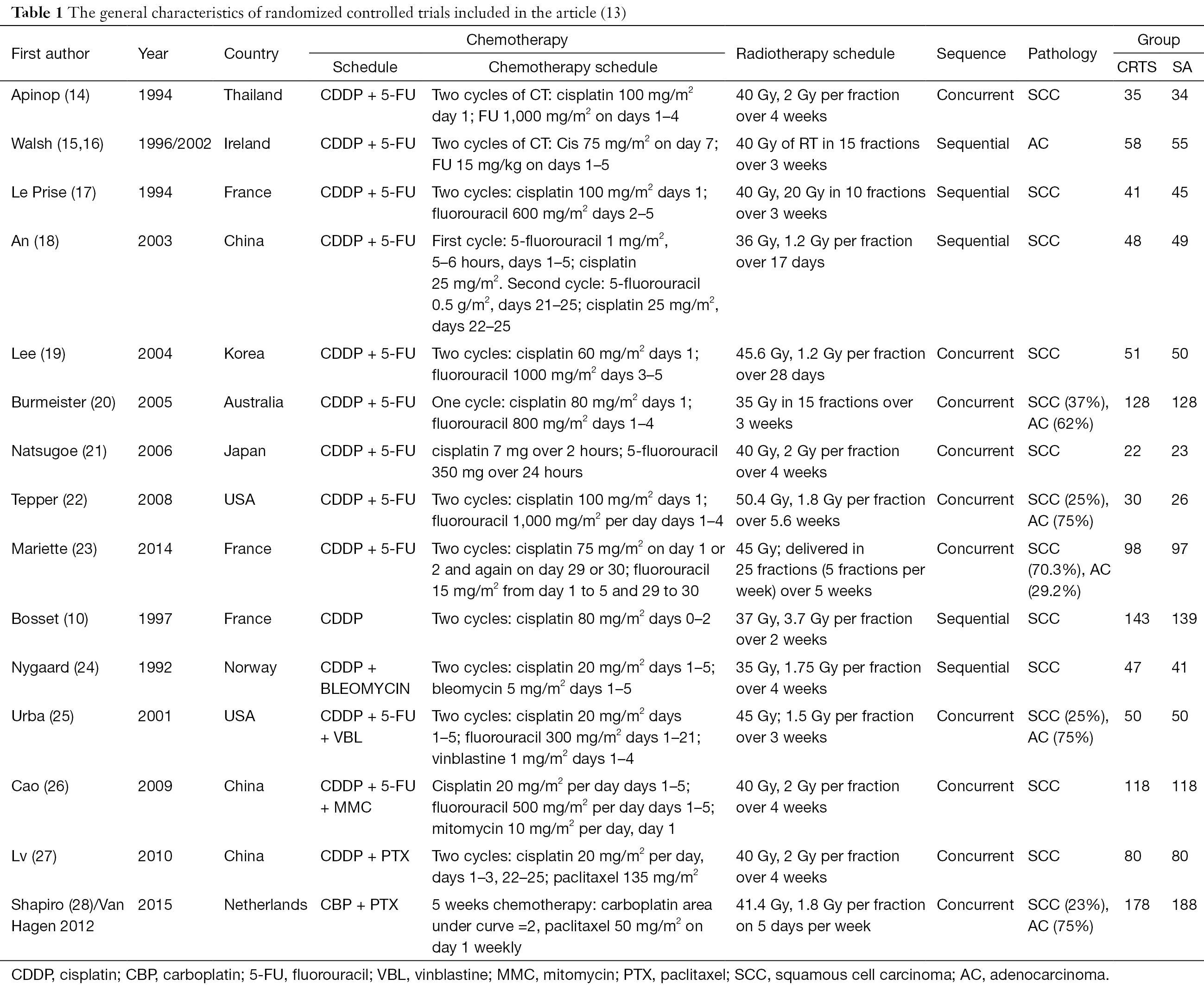 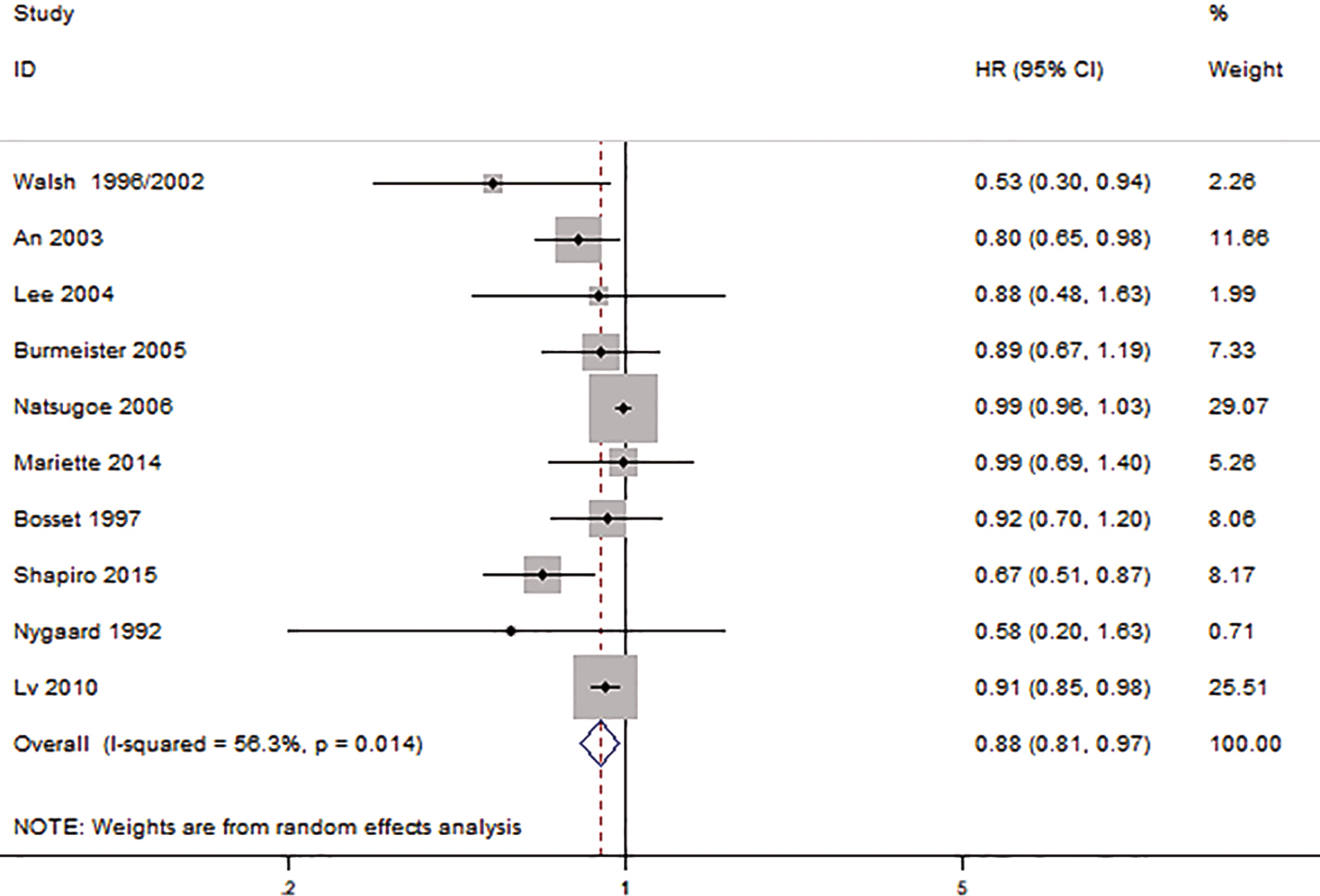 Figure 2 Forest plot of overall survival outcomes (CRTS vs. SA). Hazard ratios (HR) are shown with 95 percent confidence intervals (95% CIs). Weights (represented by the size of square plotted for each study) are from random-effect analysis. P=0.007.

OS based on histology 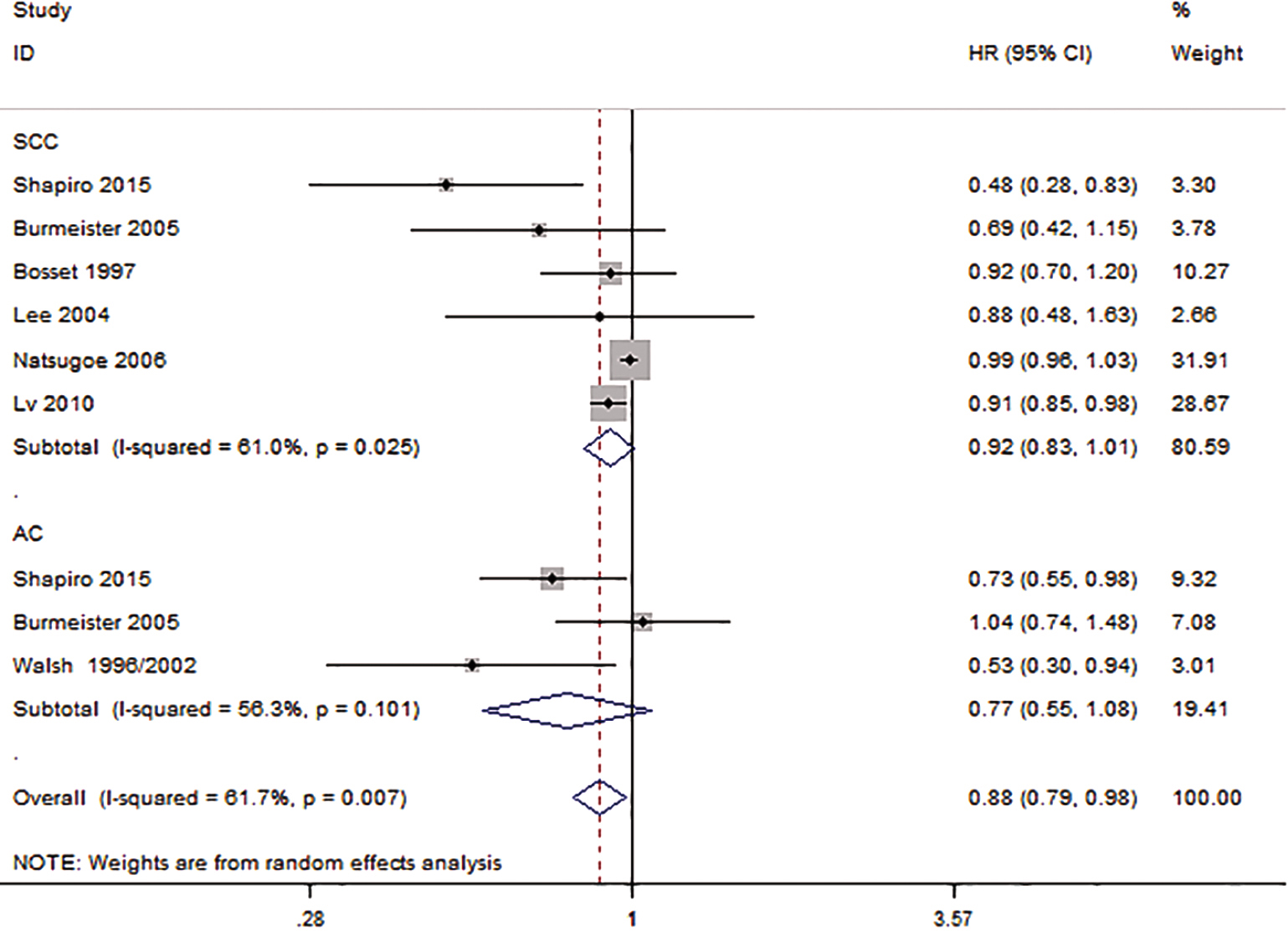 Two studies reported the HR of PFS, with the overall HR of 0.71 (0.59–0.86, P=0.007), and a statistically significant difference in the HR between those treated with preoperative CRT and SA (Figure 4). There was either no or low statistical heterogeneity among the studies (I2=35.1%, P=0.215). A fixed-effect model was subsequently selected. 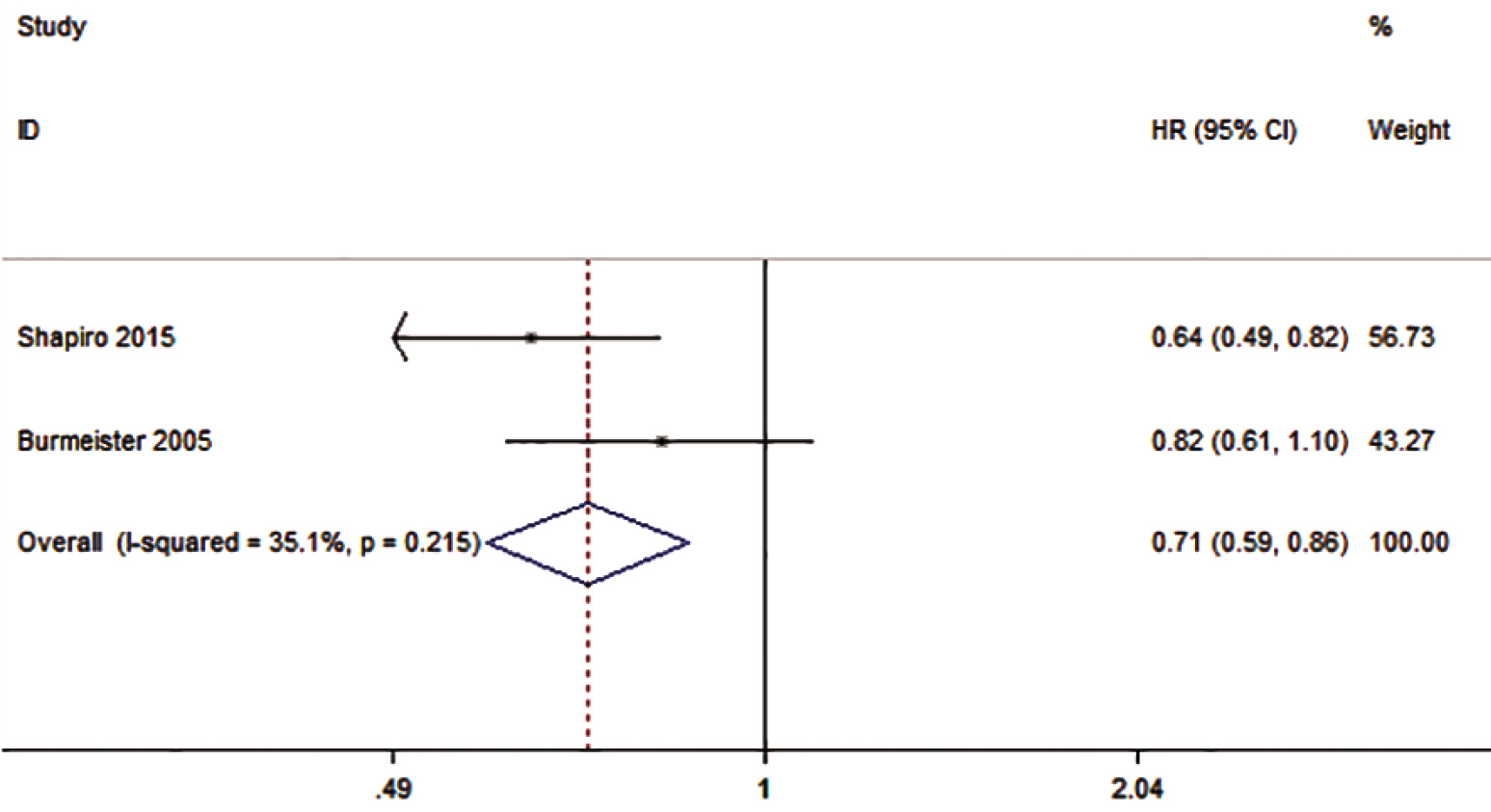 PFS outcomes based on SCC and AC 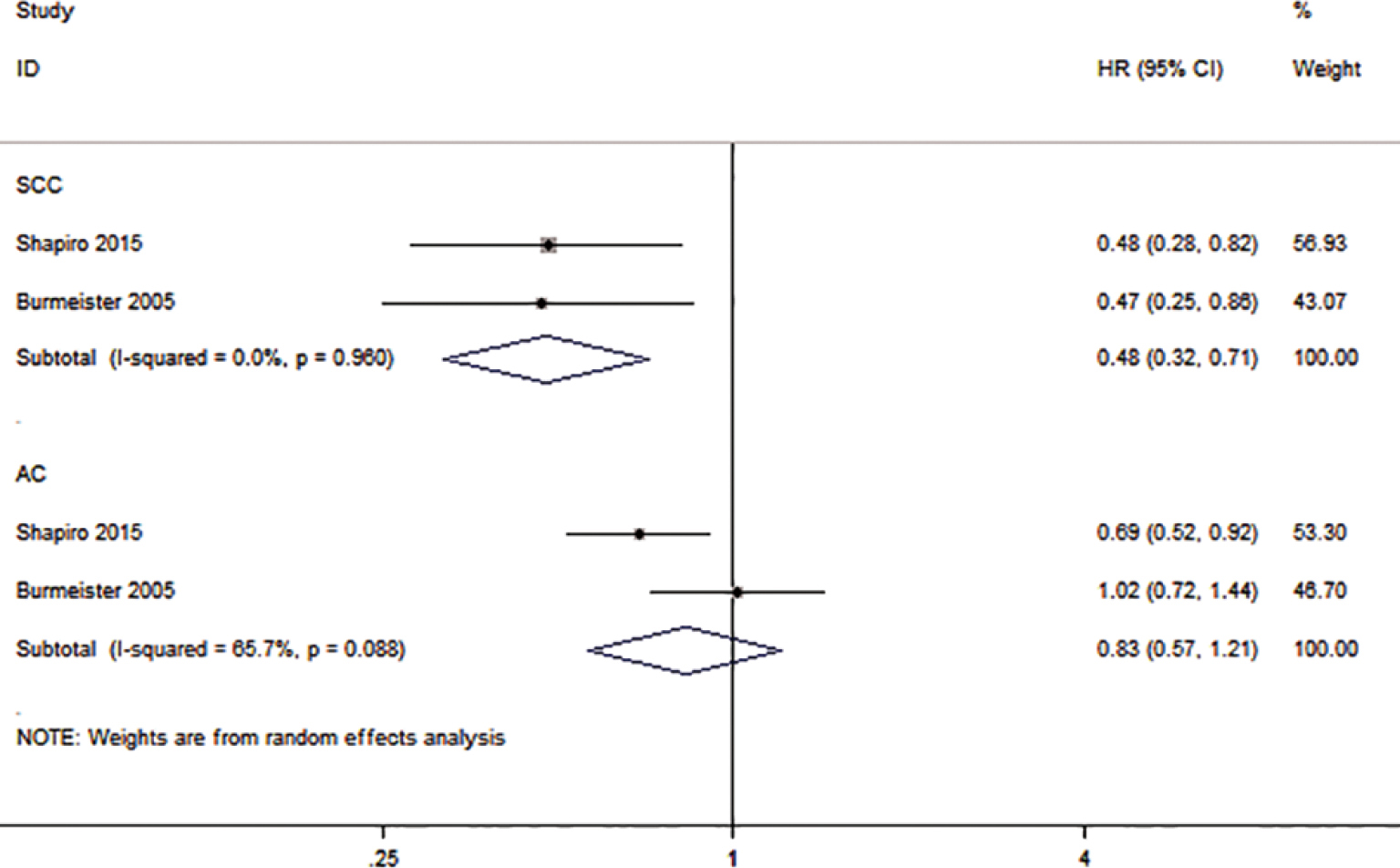 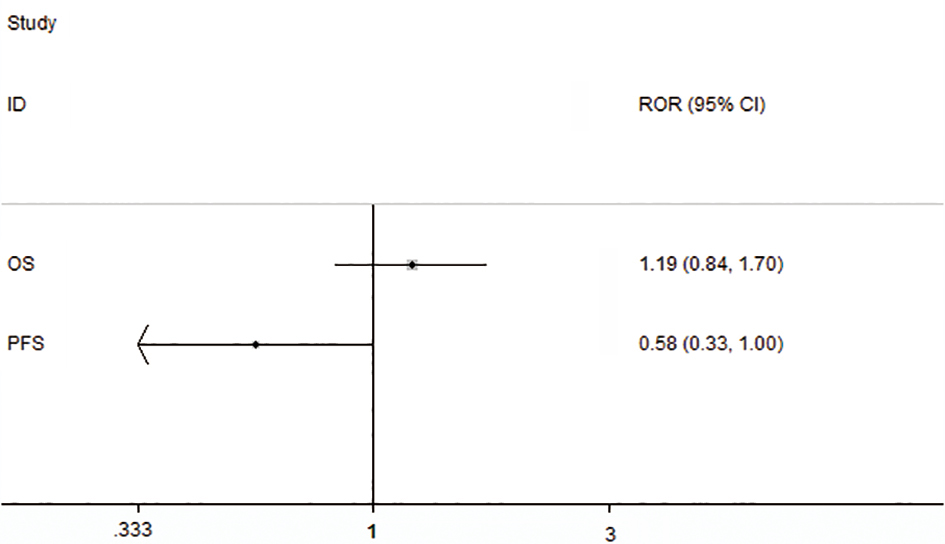 Two studies reported the HR of DFS. The overall HR of DFS was 0.78 (0.64–0.96, P=0.018), and there was a statistically significant difference in the HR of DFS between those treated with preoperative CRT compared with SA (Figure 7). The results also show that there was no or low statistical heterogeneity among the studies (I2=29.8%, P=0.233). 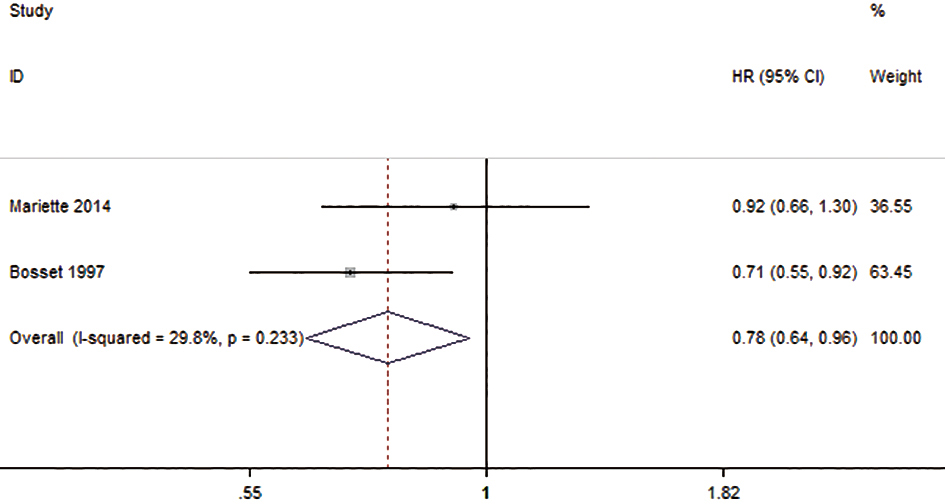 Esophageal cancer is an aggressive disease with poor prognosis, and is currently treated with CRT after surgery as a standard procedure (29). In this meta-analysis, we used HR and 95% CI to measure the survival outcomes. We observed that preoperative CRT could improve the OS, PFS and DFS compared with SA. We also conducted subgroup analyses of the histological types of esophageal cancer to reduce the heterogeneity of the article. The subgroup results show that there was no significant difference between preoperative CRT and SA in the OS for esophageal SCC and AC. However, with the subgroup of PFS results indicating that preoperative CRT is more effective for esophageal SCC. And the indirect compare results also confirmed it. Finally, we conducted a meta-analysis of DFS, with the results also showing that the preoperative CRT could improve the DFS.

The treatment of preoperative CRT for esophageal cancer is still controversial. Greer et al. and other researchers believe that the preoperative CRT and SA show no difference in the efficacy of esophageal cancer’s treatment (30,31). On the other hand, Sjoquist et al. proposed that the effect of preoperative CRT was better than SA for esophageal cancer (3,32). We have screened 15 RCTs from different databases appearing between 1994 and 2015. Compared with previous meta-analyses, our study has a large sample size, a wider range of studies, and a higher degree of confidence. This article complements the previously included meta-analyses articles with new RCTs. Among these studies, van Hagen et al.’s (33) and Shapiro et al.’s (28) research designs were identical, but their follow-up time and outcome measures were different. The reason why our article included the Shapiro study (28) was because not only was it recently published, but also because it contained the outcome index PFS that we needed. The van Hagen article (33), however, only contained the OS.

Our meta-analysis shows that the results of preoperative CRT for OS, and PFS and DFS, were all better than SA with esophageal cancer. Meanwhile, the subgroup analyses showed that there was no significant difference between SCC and AC in OS, but the PFS subgroup did demonstrate that the SCC had a better effect compared with AC. The results also showed that there was some heterogeneity in the groups. We performed a sensitivity analysis and subgroup analysis but did not reduce the heterogeneity. Possible sources of these heterogeneities might have originated from the fact that Shapiro’s studies included both esophageal cancer and cancer at the junction, while Walsh et al.’s (15) and Burmeister et al.’s (20) studies included only patients with esophageal cancer. Second, different doses of chemotherapy and radiotherapy in addition to different treatment time might have contributed to the heterogeneity. Finally, the orders of CRT were different: Walsh used sequential CRT, while Shapiro et al. (28) and Burmeister et al. (20) both used concurrent CRT.

Compared with SA, a preoperative CRT significantly improved the PFS for patients with esophageal SCC. However, there was no clear effect on patients with esophageal AC. The RCTs included in this paper are also divided into two different groups. One group considered preoperative CRT to be clinically relevant to both SCC and AC subtypes, while the other group considered preoperative CRT to have a significant correlation with SCC, but no significant correlation to AC. This may be related to the difference in chemotherapy cycles, radiotherapy doses, and tumor location of patients in these two trial types.

Our study has some limitations. First, although 4 medical English-language databases were searched, inevitably there were relevant studies that might have been missed. Second, this article only includes articles in Chinese and English, which greatly limits the number of included trials.

The authors would like to thank Kehu Yang (Evidence Based Medicine Center of Lanzhou University) for the support given to the methodology.