Targeted therapy has brought significant changes and great benefits to metastatic renal cell carcinoma (mRCC) patients. Different from Western targeting therapy, sunitinib and sorafenib are recommend as first-line treatment by Chinese guidelines on the management of RCC (1) and these two agents are the most widely used first-line targeted drug for mRCC in China (2). The median survival time of patients with mRCC is improved, and the goal is to achieve better long-term survival (3). However, most patients with mRCC will develop to secondary drug resistance after targeted therapy of about 6 to 12 months (4). Therefore, to find pretreatment clinical markers that can effectively predict the prognosis of targeted therapies and can accurately identify patients who will benefit are important research directions for target therapy of mRCC. Although several prognostic models such as the International Metastatic Renal Cell Carcinoma Database Consortium (IMDC) model (5) and Memorial Sloan-Kettering Cancer Center (MSKCC) model (6) were well designed to better appropriate management decisions in patients with mRCC receiving targeted therapy, more nutritional and inflammatory markers are being added to make the traditional prognostic model more accurate recently.

Systemic inflammation is closely related to the development of the tumor (7). There are many clinical hematological indicators which could reflect body inflammation levels. Routine laboratory inflammation indexes such as CRP (8), albumin (9) were proved to be important prognostic indicators for mRCC patients receiving target therapy. Recently, some new combined indexes like neutrophil to lymphocyte ratio (NLR) (10), platelet to lymphocyte ratio (PLR) (11,12), prognostic nutritional index (PNI) (13) were also found to be effective prognostic biomarkers. Fibrinogen is a kind of glycoprotein which is synthesized and secreted by the liver, and it is a common and important blood coagulation test index in clinic. Similarly, fibrinogen is also highly expressed in different tumors and closely related to tumor activity (14). High fibrinogen level was proved to be a risk factor in non-mRCC (15) and localized upper tract urothelial carcinoma (16). And for mRCC patients treated by interleukin-2, high fibrinogen levels were also found to be independently associated with the tumor responses and survival outcomes (17). However, the prognostic evidence of fibrinogen in mRCC patients treated with targeted therapy remains elusive.

Thus, in this study, we conducted a large retrospective study to analyze the prognostic role of fibrinogen in metastatic RCC patients receiving target therapy and added fibrinogen to IMDC model to prove its prognostic efficiency.

The electronic medical records and laboratory data of mRCC patients from March 2006 to December 2016 at the Department of Urology in Renji Hospital affiliated to Shanghai Jiao Tong University School of Medicine were analyzed retrospectively. Ethical ratification was authorized by the clinical research ethics committee of Renji Hospital. This study involved patients who was confirmed as renal cell cancer with metastasis histologically or cytologically and received first-line targeted treatment of sunitinib or sorafenib. The blood routine, liver and kidney function and fibrinogen of whom were recorded within one to two weeks before targeted treatment. Patients who did not conform to the above criteria and who with incomplete clinical medical records or follow-up data were excluded from this study.

Sorafenib was taken 400 mg BID orally in cycles of 4 weeks and sunitinib was taken 50 mg QD orally for the first 4 weeks in a 6-week cycle (4-week on, 2-week off-4/2 schedule). Dose adjustments, including dose increase or dose reduction will be based on adverse events experienced by the individual patient. After the target treatment began, the patients were followed up monthly and the imaging examination was reviewed every 2–3 months until the patient was lost to follow up or died. Progression-free survival (PFS) was defined as the time from onset of target therapy to first documentation of objective tumor progression or the last visiting day recorded if the disease did not progress. overall survival (OS) was defined as the time from date of onset of target therapy to date of death due to any cause or the last visiting day recorded if the patients were alive.

All analyses were performed using the SPSS version 22.0 (IBM Corp., Armonk, NY, USA) and R (R version 3.4.3). Pearson’s Chi-squared test was used to compared categorical variables. Receiver operating curve (ROC) analysis was used to determine the best cutoff point of plasma fibrinogen levels to separate patients’ survival outcomes. The optimal threshold of fibrinogen value was determined on the ROC curve with a maximum Youden index. Kaplan-Meier method was used to describe survival curve and log-rank test was used to compare the PFS and OS. Cox regression analysis and Cox’s proportional hazard model was used to calculate prognostic value of different variables. C-index and ROC analysis were used to estimate predictive ability of survival outcomes. All statistical tests were two-sided, and the level of significant P was <0.05. The C-index was built based on training set with the R package “survival”.

A total of 318 cases of mRCC who treated with targeted therapy were retrospectively retrieved from medical records. Of these patients, 164 patients were complied with our inclusion criteria and included in this study. The clinical characteristics were shown in Table 1. ROC analysis to determine the cutoff point of fibrinogen was shown in Figure 1 and the best cutoff value of fibrinogen was 2.940 g/L. Ninety-four patients constituted low fibrinogen group (<2.940 g/L) and 70 patients constituted high fibrinogen (≥2.940 g/L) groups. Our final cohort included 122 men (74.4%) and 42 women (25.6%). Median age was 60 years (24–82 years). Of them, 7 patients Furman grade could not be found in the database. Seventy-four (45.1%) patients belonged favorable IMDC group, 64 (39.0%) belonged intermediate IMDC group and 26 (15.9%) belonged poor IMDC group. Sorafenib was administered as first-line therapy in 101 (61.6%) patients whereas sunitinib was 63 (38.4%). 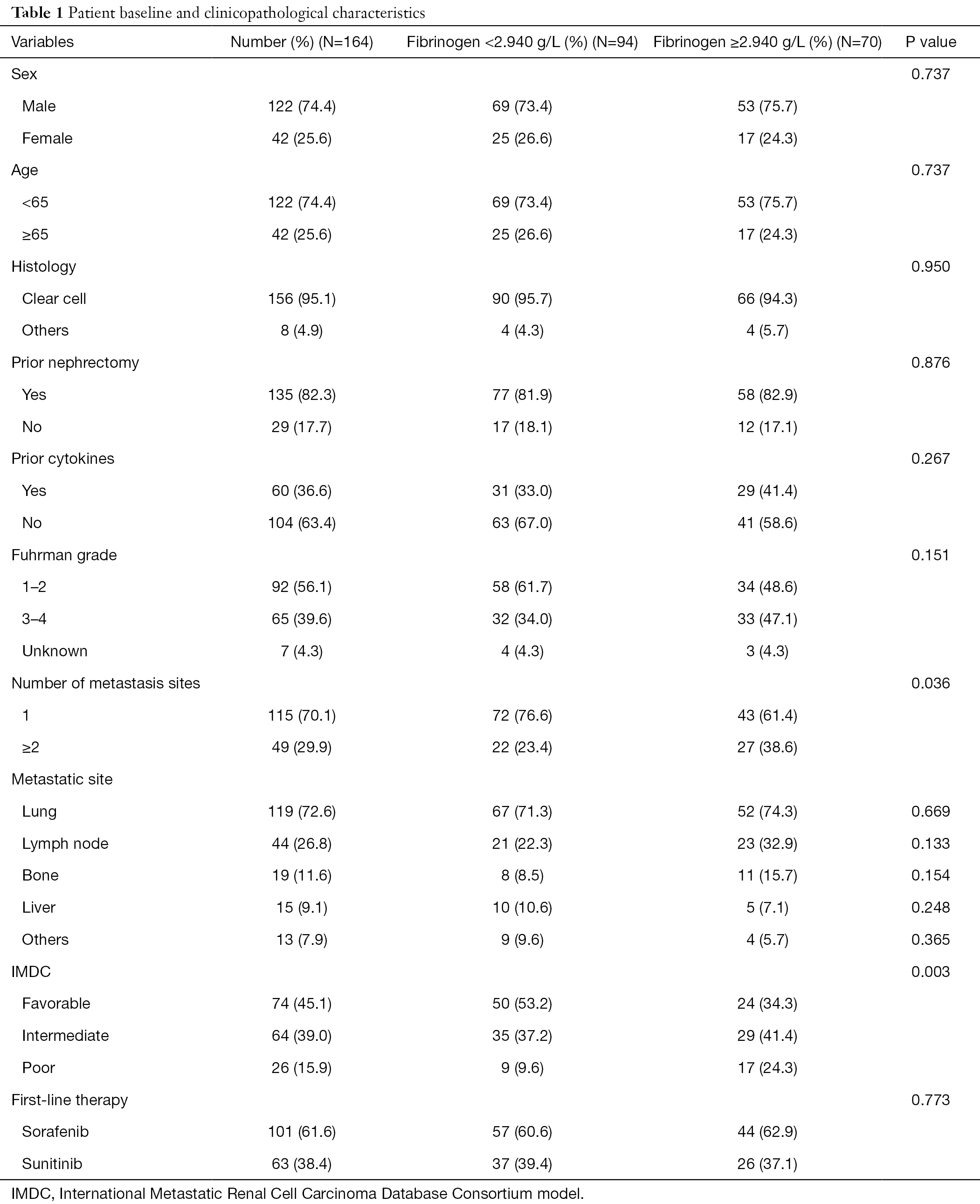 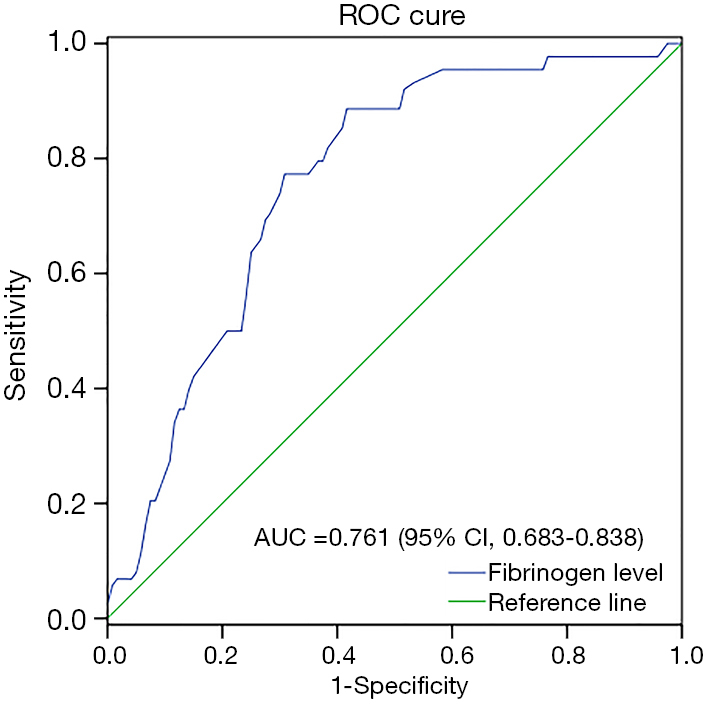 Correlation between fibrinogen and clinical and pathological characteristics

The median (range) pretreatment plasma fibrinogen level was 2.76 (1.98–4.56) g/L. No significant difference was found in sex, age, histology, prior cytokines therapy or nephrectomy, Fuhrman grade and the kind of first-line targeted agents between two groups. In the high fibrinogen level group, there were more patients with ≥2 metastasis sites (38.6% vs. 23.4%, P=0.036) and more patients with poorer IMDC risk grade (P=0.003). 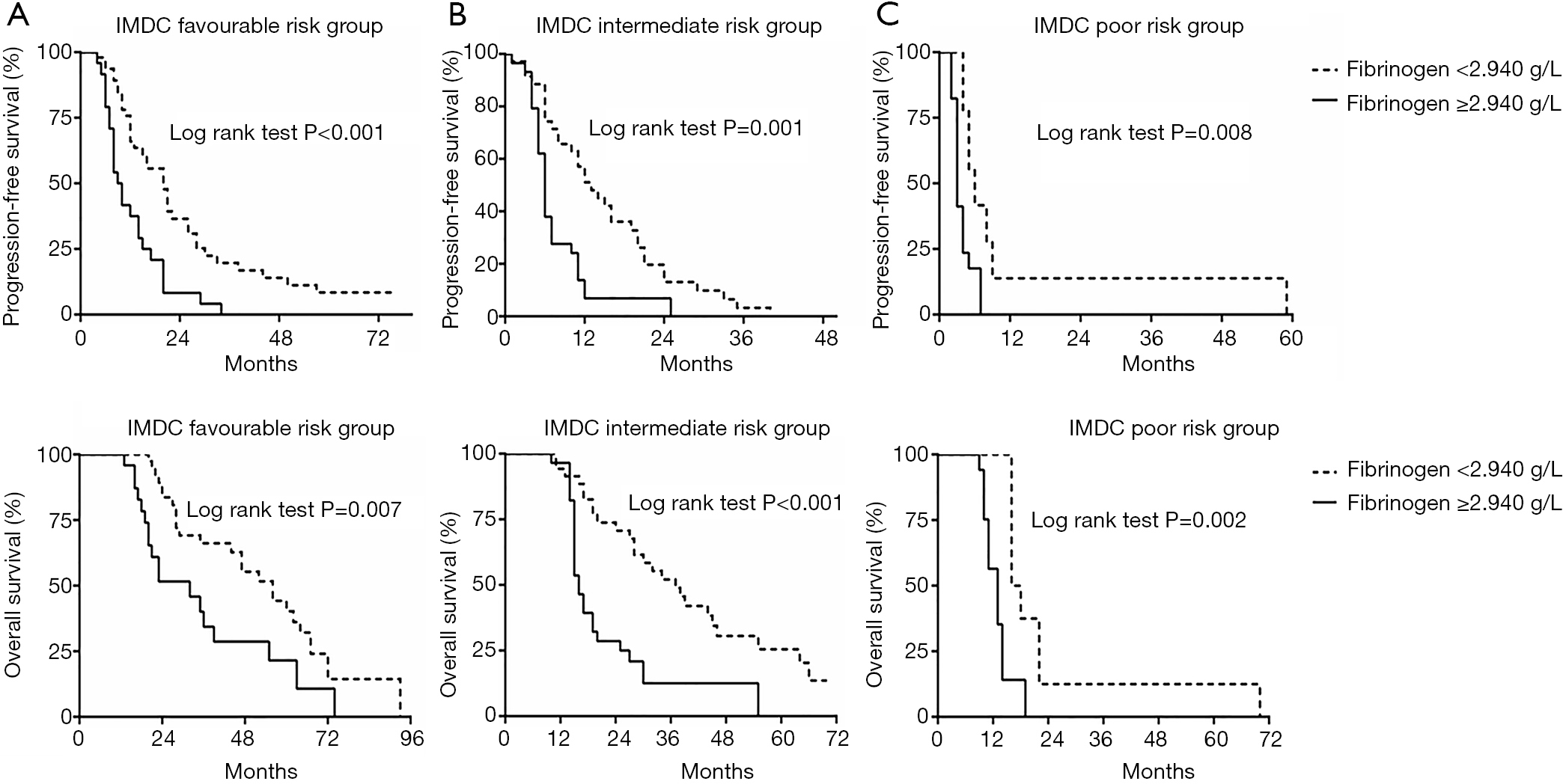 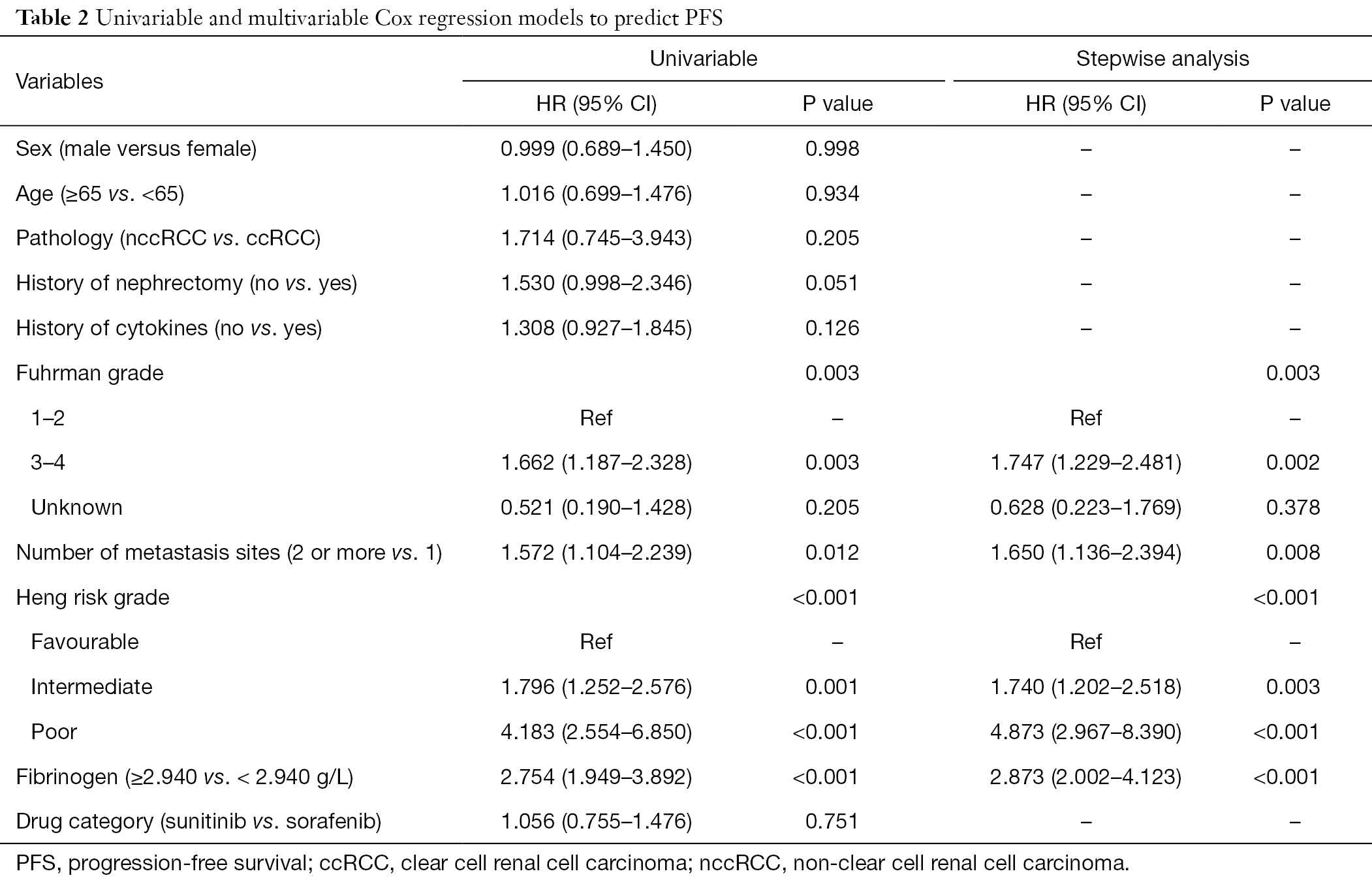 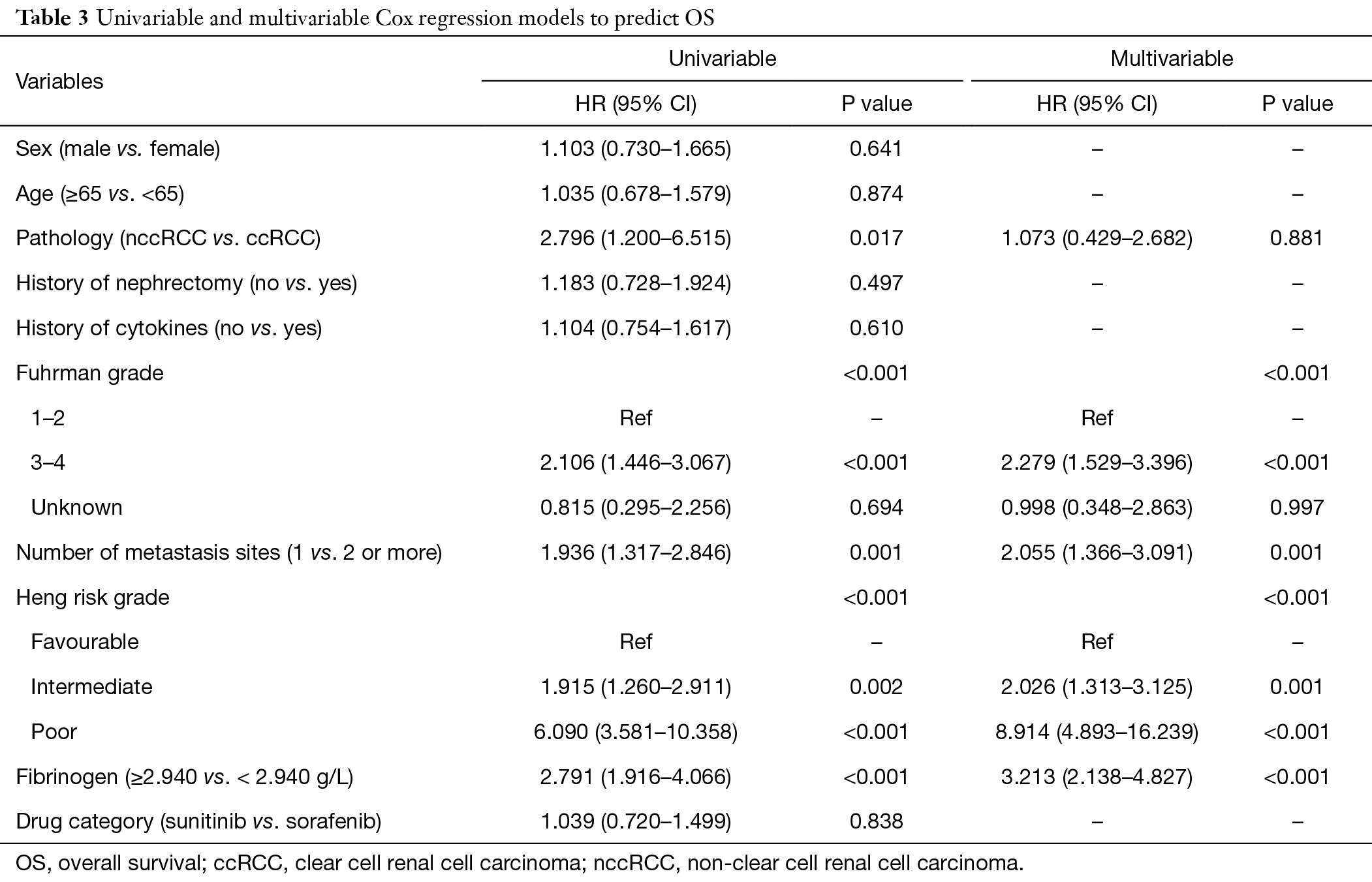 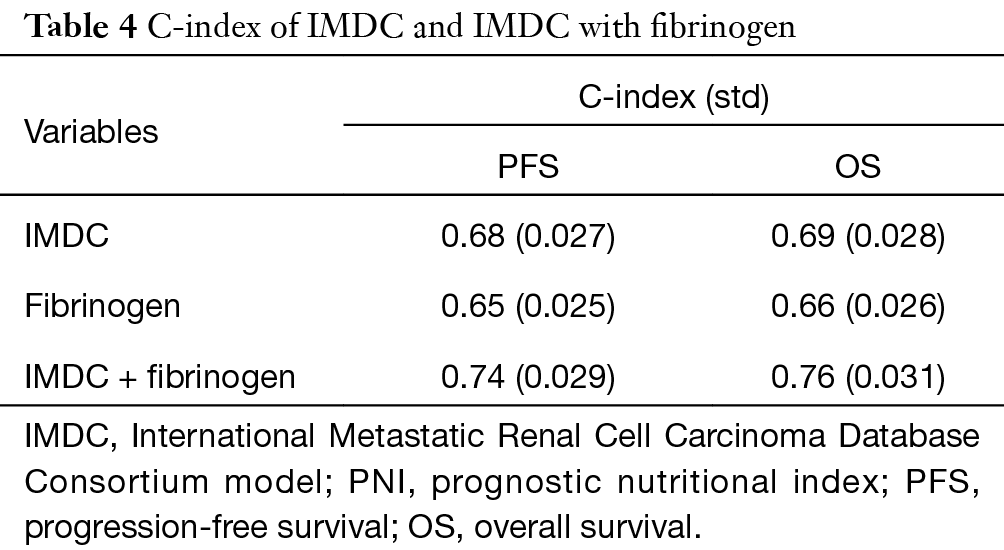 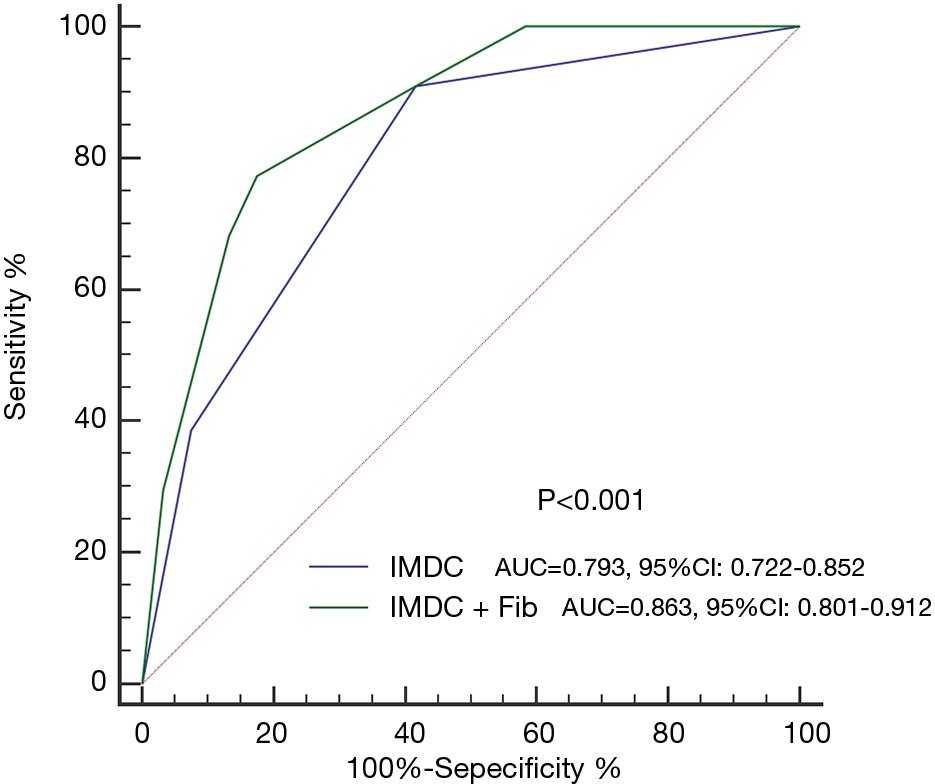 Several established prognostic models are used to predict the clinical outcomes of mRCC. According to the IMDC model, pretreatment anemia, thrombocytosis, neutrophilia, KPS and time from diagnosis to first-line targeted therapy are prognostic factors for mRCC. Moreover, system inflammation markers like CRP (8), NLR (10) an PLR (11) represent new independent survival outcomes predictors of mRCC patients. Fibrinogen was also proved to be a prominent prognostic indicator in different cancers such as hepatocellular carcinoma (18), esophageal squamous cell carcinoma (19) and localized renal cell carcinoma (20). Tsimafeyeu et al. (17) have compared OS time between two groups of mRCC patients with and without hypercoagulability then found that hypercoagulability was an independent risk factor for mRCC. However, they have not analyzed the fibrinogen level separately. The number of patients was limited in their study and they have not specifically included patients who receive targeted therapy. Therefore, the potential prognostic significance of fibrinogen is still limited in target treatment of mRCC. New biomarker for prognosis is important since they would guide clinical judgment and treatment for individual patient. To the best of our knowledge, this work is the first to demonstrate the prognostic value of pretreatment plasma fibrinogen level in mRCC patients receiving target therapy. Finally, we found that fibrinogen could accurately predict the clinical outcomes of mRCC and increase the accuracy of prognostic prediction of IMDC model.

Systemic inflammation is an important risk factor for tumor progression. The change of plasma fibrinogen is associated with abnormal coagulation and inflammation of the body (20). Renal cell carcinoma cells may activate the coagulation cascade, and thus increase the plasma fibrinogen level and promote the hematogenous metastasis (20). Fibrinogen can be synthesized endogenously through the tumor cell and it can regulate the growth of cancer cells by binding to VEGF, FGF-2 and PDGF (21). In addition, VEGF can also conversely stimulate the endothelial cells, activate the coagulation cascade, and increase the fibrinogen level (22). Blocking the VEGF and PDGF signaling pathways may reverse the physiological processes of VHL gene function and thus inhibit tumor growth, which is the rationale for anti-angiogenic therapy for mRCC (23). Thus, on one hand, high plasma fibrinogen might be related to the progress of renal cancer, and on the other hand it is related to drug resistance of target therapy.

As to clinic-pathological parameters, the higher clinical stages of multiple tumors were reported to be accompanied with an increased plasma fibrinogen level (24-26). Du et al. (27) found that a higher plasma fibrinogen level was significantly correlated to higher Fuhrman grade, pathologic T stage and larger tumor diameter in non-mRCC. Further, Pichler et al. (15) and Obata et al. (20) found it also predicts worse survival endpoints in localized renal cell carcinoma. In mRCC, we also found that the proportion of patients with more metastatic sites in the high fibrinogen level group was higher than the low group (P=0.036). Clinical studies suggest that hypercoagulability is common in the blood of patients with malignant tumors and it can accelerate the metastasis of tumor then ultimately affect the prognosis of patients (14), which was consistent with our research. More metastatic sites might mean a higher plasma fibrinogen level. We also found that there were more patients with poorer IMDC risk patients in high fibrinogen group. In order to better compare the fibrinogen level with the basic IMDC model and eliminate this interference, we separately analyzed the survival curves of the high and low fibrinogen level in each subgroup of IMDC. The results showed that both the PFS and the OS in the high plasma fibrinogen level group were significantly lower than the low fibrinogen group whether in favorable, intermediate or poor risk IMDC group. Similarly, in multifactor analysis, except other interfering factors, fibrinogen remained an independent risk factor for survival outcomes.

At present, the commonly used prognostic models like IMDC show good accuracy and applicability in clinical application of targeted therapy in mRCC (4). With further research on the mechanism of inflammation, tumor occurrence and development, and new-found prognostic factors of mRCC, more accurate and adaptable prognosis models for target treatment of mRCC are expected to be developed and applied. In this work, we found that adding fibrinogen to base model was able to raise the predictive accuracy. The C-index of IMDC for FPS and OS was 0.68 and 0.69, and the AUC was 0.793. After adding fibrinogen to it, predictive accuracy increased to 0.74 and 0.76. AUC could also be improved to 0.863. Fibrinogen is easy to assess and could be routinely measured before target therapy. Addition of fibrinogen can help predict the prognosis of clinical more accurately, and further to help scientifically develop the next target treatment strategy.

This study had several limitations. Firstly, this is a single-center retrospective study. Despite we have analyzed the data which were strictly included according to criteria, some confounding and bias were still inevitable. Secondly, different patients would choose different second- or third-line treatment which might have significant inference on OS time. Thus, Future researches are recommended to study the prognostic role of plasma fibrinogen level, reveal its underlying mechanisms and improve predictive accuracy of traditional model in order to a better guide for targeted therapy in mRCC.

This study showed basal plasma fibrinogen status could be used as an independent prognostic parameter for the PFS and OS of patients with mRCC receiving target therapy. It could also be an important complement to the traditional prognostic model. Monitoring the fibrinogen status is not only an effective measure to detect coagulation status, but also play an important role in controlling the development and predicting prognosis of target treatment in mRCC.

Funding: This study was supported by grant number SFGG201442 from Qiqihar Science and Technology Plan Project, 81472378 from National Natural Science Foundation of China, PYXJS16-008 from the Incubating Program for Clinical Research and Innovation of Renji Hospital and 16CR3062B from the Shen Kang - 3 years action plan program.