Ovarian cancer starts as a single tumor, then mutates to a heterogeneous complex disease that is composed of different types of tumors (1). It remains the most fatal disease in women reproductive system. Even if the disease is in the early stages, early detection is sometimes difficult. Although the standard approved chemotherapy treatments for ovarian epithelial, fallopian, and peritoneal cancers are bevacizumab (Avastin), Alkeran (Melphalan), Bevacizumab, Carboplatin, Cisplatin and Olaparib (Lynparza) in a single or in a combination form, sometimes show undesirable drug resistance after the initial promising treatment. Therefore, the development of new drugs is required to enhance the drug pharmacological activity and to reduce the drug’s side effects based on reliable protein biomarkers. This will effectively help in ovarian cancer early detection and treatment. Kim et al. and others have stated that HSP27, and HER2 are both reliable cancer biomarkers (2-7).

HSP27 is a low molecular weight protein (27 kDa), which is expressed in all eukaryotic cells. It plays a role in normal cell proliferation, differentiation, invasion, metastasis, and death. HSP27 exists in two forms: either as a large oligomer for chaperon intrinsic functions or as a small oligomer that binds to the microfilaments to stabilize them as extrinsic functions Figure 1A (6,8). It is also known to assist the correct folding of the misfolded proteins to the correct chain structure (9,10). In addition, HSP27 prevents apoptosis through inhibition of apoptotic protein release from the mitochondria. It is a group of polypeptides, which work when the cell is subjected to stressful conditions such as an increase in temperature or pressure, or when the cell is faced with some toxic compounds such as chemotherapy drugs (11). Stress induces an increase of expression and phosphorylation of HSP27. HSP27 interacts with many proteins to stabilize them and prevents a variety of chemotherapy drugs from causing cancer cell death (12). Thus, clinically HSP27 displays drug resistance to chemotherapy treatment in some types of cancers, and there have been reports stating that high HSP27 expression is associated with poor patient survival rates (2,4-6). In addition, HSP27 over-expression was found in a number of malignant cancer types such as prostate, breast, pancreatic, and ovarian cancers (13). Further, HSP27 is over-expressed in a late stage ovarian malignant tumor more than the early stage of the benign tumor. Although the cellular role of HSP27 in cancers is not yet completely understood, HSP27 is potentially a good molecular target for cancer therapy (5,6). 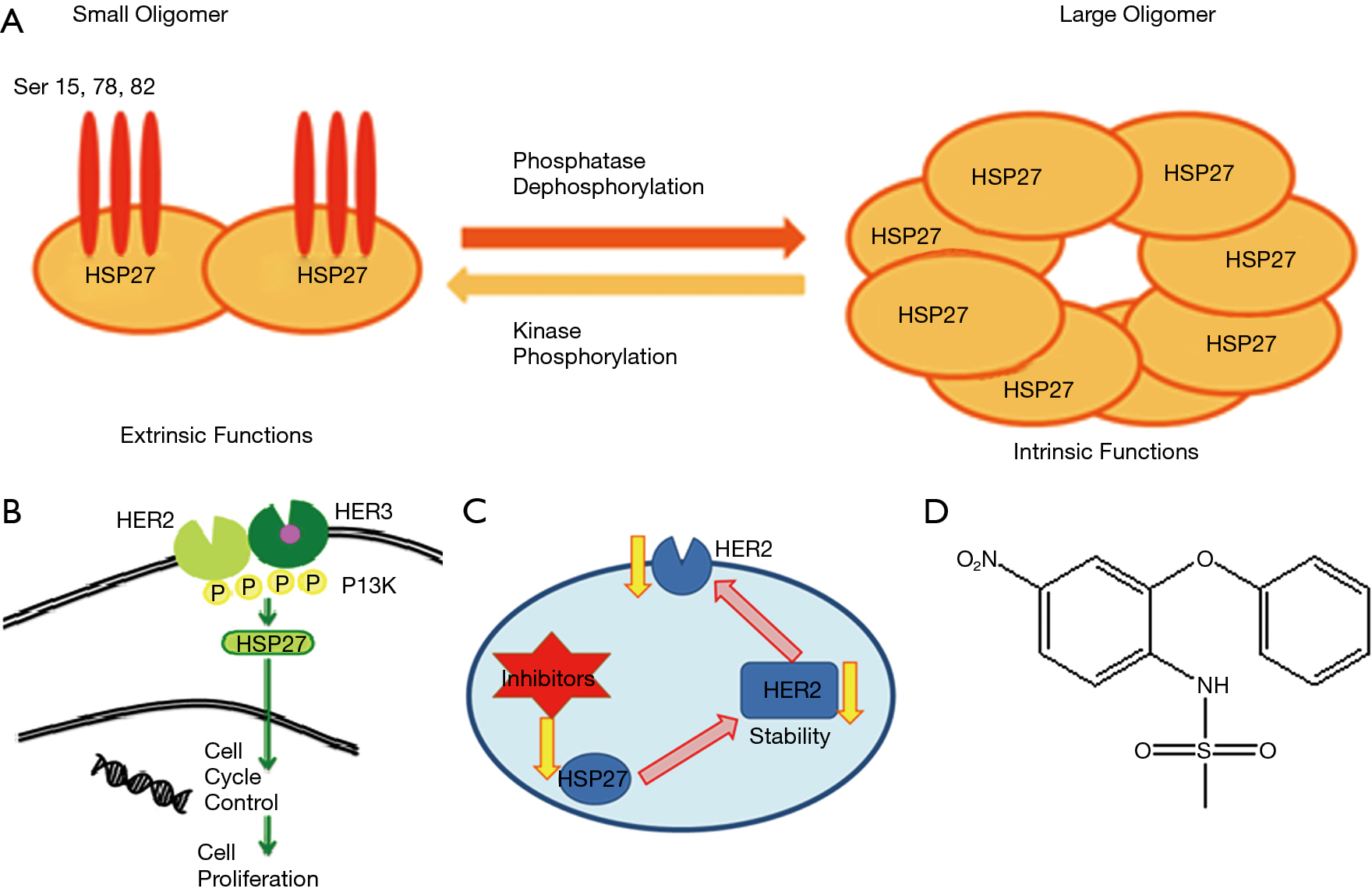 HER2, on the other hand is a trans-membrane protein tyrosine kinase receptor, which regulates cell survival, proliferation, differentiation, and migration. Over-expression or mutation of HER2 is associated with a malignant phenotype in many cancers, including ovarian cancer (14,15). This protein forms a dimer by binding to another family member growth factor receptor in the cell membrane, which activates downstream signaling pathway through kinase phosphorylation; then this process activates HSP27 protein’s function, which is important for the cell cycle check points Figure 1B (5). Studies have shown that HSP27 expression is directly proportional to HER2 expression up/down regulation and both are regulated through MAPK phosphorylation pathway (14,16-18). There are many drugs of monoclonal antibodies that target HER2, the common drug used being trastuzumab (Herceptin). It is a humanized recombinant monoclonal antibody, which is used clinically to treat patients with HER2 positive (5,19,20). HER2 over-expression cell lines were down-regulated after treatment with herceptin such as SKBR3 breast cancer cell line (2). However, the majority of patients that initially respond to herceptin begin to progress again within one year (20). In addition, HSP27 has been recognized to reduce cellular herceptin’s ability by direct binding to HER2 and increasing its stability (18,21). HER2 over-expression ovarian cancer is more resistant to the chemotherapy drugs including taxol, which leads to aggressive progression in ovarian cancer (19,20).

HSP27 and HER2 interactions’ complex often increases the protein stability and up regulated HSP27 protein expression levels, which have been reported in HER2 positive breast tumors Figure 1C (21,22). In order to overcome the barrier of chemotherapy drug resistance, nimesulide drug was used as a starting material to synthesize a series of compounds for the inhibition of HSP27 function (23-25). Nimesulide is a non-steroidal, anti-inflammatory drug, and is characterized by analgesic, antipyretic, and anti-proliferation properties Figure 1D.

The main aim of this study is to find HER2 over-expression ovarian cancer cell line (OVCAR3, SKOV3, & HEY1B) using western blot assay, followed by the screening and evaluation of the potent anticancer agents’ activities using the standard MTT assay designed to assess the cell proliferation after HSP27 suppression. It is worth noting that our goal is to target dual proteins through HER2 pathway Figure 1C (26-29).

The cells were maintained in RPMI1640 medium containing 10% FBS, and 10 mL penicillin-streptomycin and 100 µL ciprofloxacin. FBS was deactivated for 30 min in a 37 °C water bath before use. Cell cultures were grown at 37 °C, in a humidified atmosphere of 5% CO2 incubator.

Confluent ovarian cancer cells dishes (OVCAR3-SKOV3-HEY1B) were washed with PBS and the cells were harvested by scraper. This was followed by re-suspension of the cells with PBS and then centrifuging the collected sample at 3,500 g. The supernatant were then removed and the collected cell pellets were lysed by mixing them with RIPA, PI, and EDTA 100 µL. The cells were then vortexed and centrifuged for 60 minutes at 16,500 g. Each cell line proteins were boiled with (2×) loading buffer for 5 min and then normalized and electrophoresed on a 10% SDS-polyacrylamide gel. The gel containing the proteins was transferred to nitrocellulose membrane followed by blocking of the non-specific proteins with 5% NFDM in PBST. The membranes were rinsed three times for five minutes with PBST (0.1% Tween 20). Then, the membrane was incubated with the primary antibody (target-HER2) for one hour (rabbit 1:1,000 dilution). Next, the membranes were washed three times with PBST for 10 minutes each and incubated with the secondary antibody (anti rabbit-HRP conjugated secondary antibody 1:1,000 dilution) for one hour. Similar steps repeated for the membrane incubated with HSP27 (rabbit 1:500 dilution) followed by one-hour incubation with the secondary antibody. Then, the membrane was again washed with PBST three times for 10 minutes each to be prepared for the visualization of the bands by chemiluminescence substrate. B-actin (1:1,000 dilution) was used as housekeeping control.

MTT assay was performed by monitoring the reduction of yellow MTT (3-(4,5-Dimethylthiazol-2-yl)-2,5-diphenyl tetrazolium bromide) to violet color product. After culturing the cells in the 2D monolayer cell culture, cells were harvested and then seeded with RPMI1640 medium into 96-well, and incubated overnight. Then, cells were treated with different concentrations of anticancer agents in four replicates each and incubated for 72 hr. DMSO control wells received concentrations equal to those in the drug-treated cell wells. The cell viability was determined by MTT reagent the popular metabolic dye 100 µL of 0.5 mg/mL in fresh medium, added after the removal of the old medium and the cells were incubated for 1 hr. Supernatants were removed from the wells and 100 µL DMSO were added on the reduced MTT dye. The final absorbance measurement was determined using a plate reader at 570 nm and the values were normalized to controls.

Western-blot analysis was performed as described previously. Cell lysates were collected from all three cancer cell lines to examine HER2 over-expression cell line. From the visualized bands, we found that SKOV3 cell line is highly expressing HER2 protein more than OVCAR3 and HEY1B cell lines Figure 2. Therefore, SKOV3 carcinoma cells, which express high HER2, treated with the potent selective compounds BM 1, 5, 8, 11, 13, 14, 15, 16, 17 at 1 µM concentration Figure 3. The anticancer agents showed potent reduction in HER2 expression compared with the DMSO control band. In depth, SKOV3 cells’ bands treated with the compounds BM 11, 13, 14, 15, 16, and 17 were much more potent than BM1, 5, and 8 in reducing HER2 protein expression. 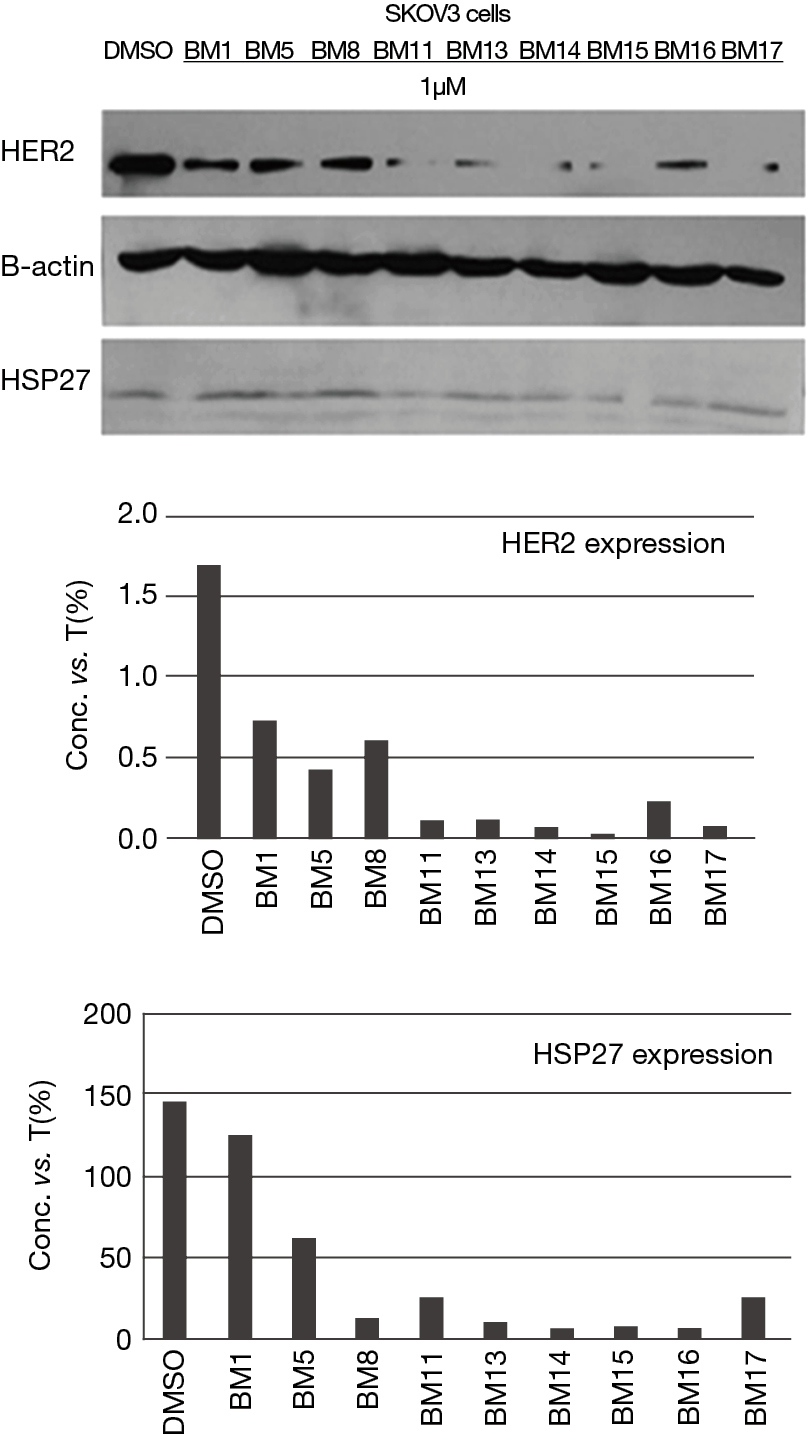 HSP27 inhibitors were examined for their potency and selectivity on cell growth inhibition with SKOV3, OVCAR3 & HEY1B ovarian cancer cell lines using MTT assay. The IC50 values for each anti-cancer agent were summarized in Table 1. The data revealed that SKOV3 cell growth inhibition ranged from 0.010 to 0.039 µM. While, OVCAR3 cell line showed cell growth inhibition ranges from 0.052 to 5.989 µM. Also, HEY1B cell growth inhibition ranged from 0.013 to 208.8 µM. The data analysis showed that our agents have potent anti-cancer activity and almost all of the agents showed activity with SKOV3 cell line but some of the agents have potential only towards OVCAR3, and others only towards HEY1B cell line. However, the anticancer agents BM 1, 5, 8, 11, 13, 14, 15, 16, 17 had the potential towards both OVCAR3 and HEY1B cell lines, and selectively towards SKOV3 cell line, which is highly adapted cell growth inhibition Figure 3. Further in depth, analysis of the data revealed that BM 11, 13, 14, 15, 16 &17 were more potent compounds when treated with SKOV3, than BM 1, 5 and 8. This potency is related to the presence of the shared propyl side chain in the chemical structure Figure 4A. Further, in comparing the most potent compounds BM13 and BM17 (IC50 values and structures), their strengths related to the methoxy substituent on the benzene ring Figure 4B. In sum, all agents showed potent anticancer activity Figure 4C,D. 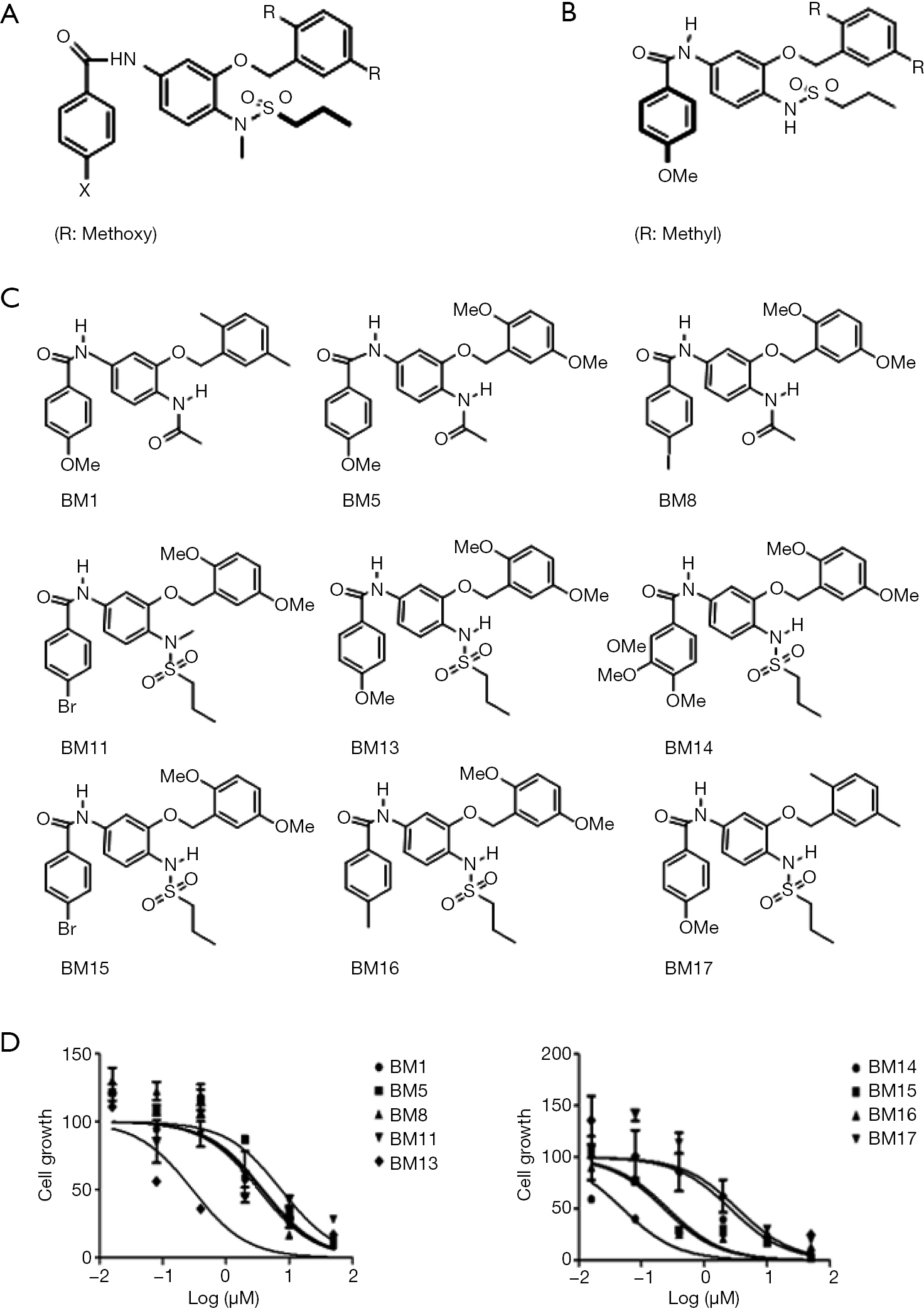 HSP27 and HER2 over-expression in ovarian carcinoma is still a matter of debate. Our anticancer agents were synthesized to target HSP27 protein function and decrease HER2 receptor’s stability through HER2 pathway. Interestingly, western blot assay data showed parallel results to the MTT assay’s data. Western blot analysis revealed that HER2 over-expression cell line is SKOV3 cell line, and the synthesized agents showed great anticancer activity towards it. In conclusion, suppression of HSP27 by anti-cancer agents reduced its function and decreased HER2 stability through HER2 pathway found in SKOV3 cells. The MTT assay data also revealed that SKOV3 cell line adapted cell growth inhibition more than OVCAR3 and HEY1B cell lines. Overall, our findings indicated that down regulation of HSP27 in SKOV3 cells lead to reduction of HER2 stability. These preliminary data indicated that we can synthesize novel anti-cancer agents, which are effective in targeting two proteins in cancer rather than operating only on a single protein.

Thanks due to Dr. Bin Su and Aimin Zhou, Cleveland State University, for providing ovarian cancer cell lines and the instruments. Also, research facilities provided by Chemistry Department, Kuwait University are gratefully acknowledged especially: instrument project no: GS01/03 and No: GS01/05, and No: GS02/01.

Funding: This project was supported by Kuwait University grant (ZS06/17).