Prostate cancer (PCa) is a common malignant tumor with an estimated 161,360 newly diagnosed patients in United States in 2017. It is also the third leading cause of cancer deaths among men, accounting for 8% of the total amount with an estimated 26,730 deaths (1). It is well known that a localized PCa can be treated with a radical prostatectomy (RP) or radical radiotherapy treatments, but it is estimated that approximately 20% of the PCa patients who undergo RP will experience disease recurrence, ending with an incurable metastasis which is responsible for more than 70% of the PCa deaths (2). Therefore, it is important to identify the population at a high-risk of developing a PCa recurrent metastasis after RP therapy.

Multiple genes participate in tumor metastasis; it has multiple steps and a complicated biological process (3,4). Although many genes have been widely confirmed to be associated with a metastasis of PCa, the predictive potential of using these genes is limited and uncertain (5-7). In addition, the tumor microenvironment varies significantly in every patient who receives treatment management when compared with the untreated cases. This difference may greatly affect the evaluation of the gene associations with a prognostic outcome (8-10). Thus, it is urgently necessary to use the appropriate genetic combination for predicting the metastasis risk for PCa patients after a radical surgery in order to manage the timely corresponding treatment. The Decipher (GC) test (11), which analyzed the expression of 22 genes, indicated that there was a significant association between the patient’s GC score and the chance of a clinical metastasis. However, the candidate gene selection was based on the comparison between 359 training and 186 validating cases in the microarray dataset, which may have had race or individual variations that could have caused bias.

In this study, we selected 10 candidate genes based on the microarray dataset of two single-patient derived tumor lines, which had simple characteristics except for the metastasis potential (12). PCa patients who underwent a radical surgery in the MSKCC (13) cohort were enrolled to evaluate the predictive performance of a single gene by way of the receiver operating characteristic (ROC) curve. Multivariate logistic regression analysis and the combined ROC curves were used to compare the metastatic prediction capability and efficiency between the candidate gene combinations and the single genes.

The candidate gene expressions from the LTL-313B and LTL-313H datasheets underwent a log transformation to approximate normality using the Z-score, and the fold change (FC). 1/FC was used to compare differences between the gene expression with the cut-off point set at 1.5. There were 1998 up-regulated and 1738 down-regulated genes left after the comparison. An overlapping of the data for the difference in expression with the clinical PCa patient’s cohort was performed to narrow the choice down, and we discovered 33 and 21 candidates for future investigation. Based on a literature search and analysis, 10 unreported candidate genes were introduced into our study.

The quantitative variables are presented as the mean and standard deviation (SD). An analysis of covariance (ANCOVA) was used to compare the expression between different groups with various features and prognoses in the MSKCC PCa cohort. ROC analyses were performed to evaluate the predictive potential of single genes and combinations of genes by analyzing the area under the curve (AUC) for each sample. Multivariate logistic regression was used to investigate the independent risk gene, and a Bonferroni correction was used for multiple comparisons among the 10 genes. Gene microarray data was normalized with Z-score transformation using a formula in Excel. Other statistics were analyzed using the SPSS (22.0 version) software package. Statistical significance was set at P<0.05.

Based on the microarray data from the PDX model LTL-313B and LTL-313H datasets, 10 candidate genes, which included 3 up-regulated and 7 down-regulated candidates in the high-metastatic tumor line, were selected for future analysis. The expression of the candidate genes in the two tumor lines is shown in the Table 1.

The MSKCC PCa patient cohort was used to evaluate the predictive potential of the candidates, and the clinical characteristic of all enrolled patients is shown in Table 2. 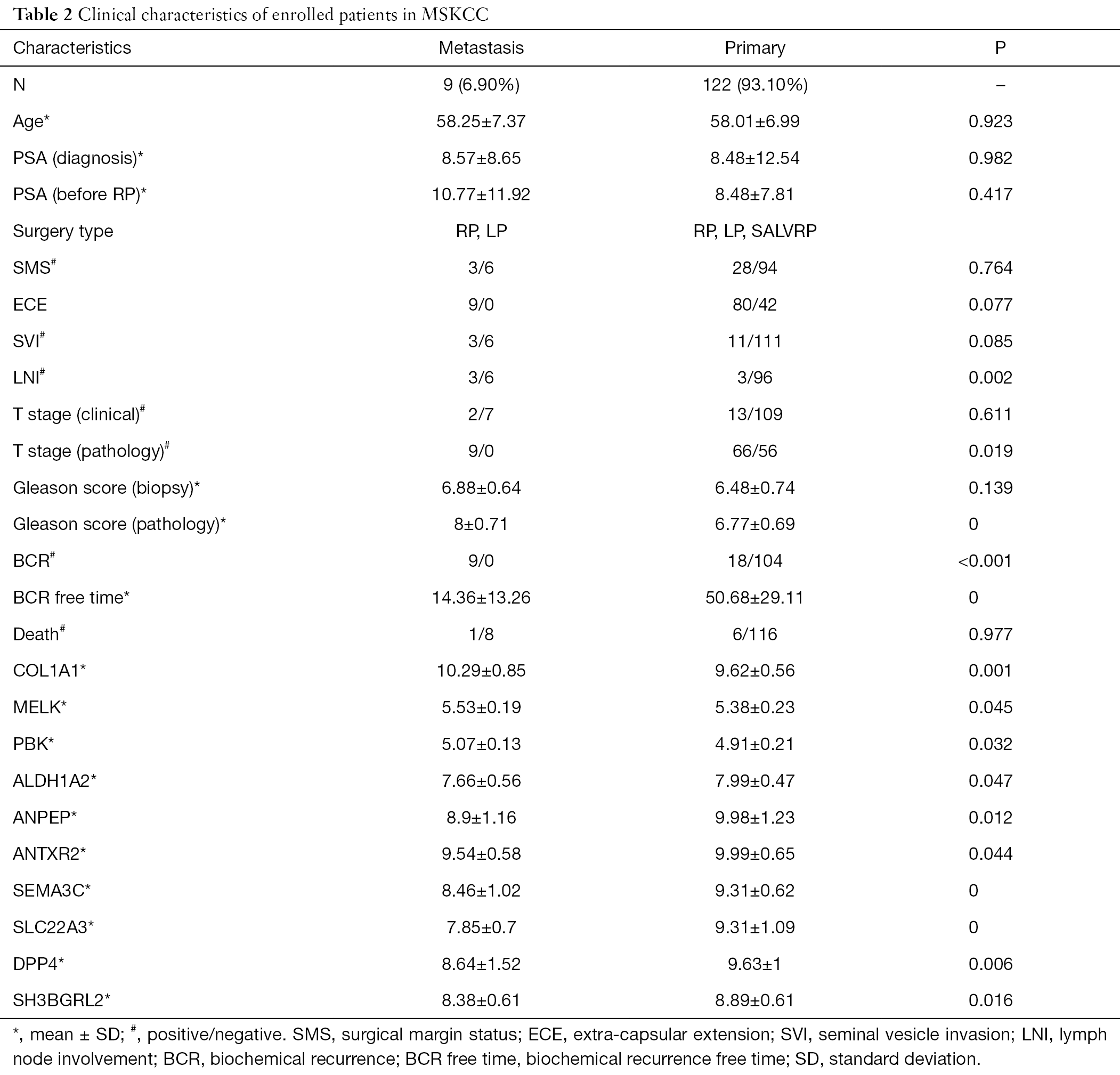 An analysis of variance (ANOVA) was performed to explore the association of clinical features and prognosis with the selected genes among the primary patient cohort who underwent radical surgery. It showed that the up/down-expressed candidate genes were significantly associated with the PCa metastasis, and some were also related to BCR, death (Table 3) as well as the PSA, Gleason score, SMS, ECE, SVI, and LNI (data not shown). 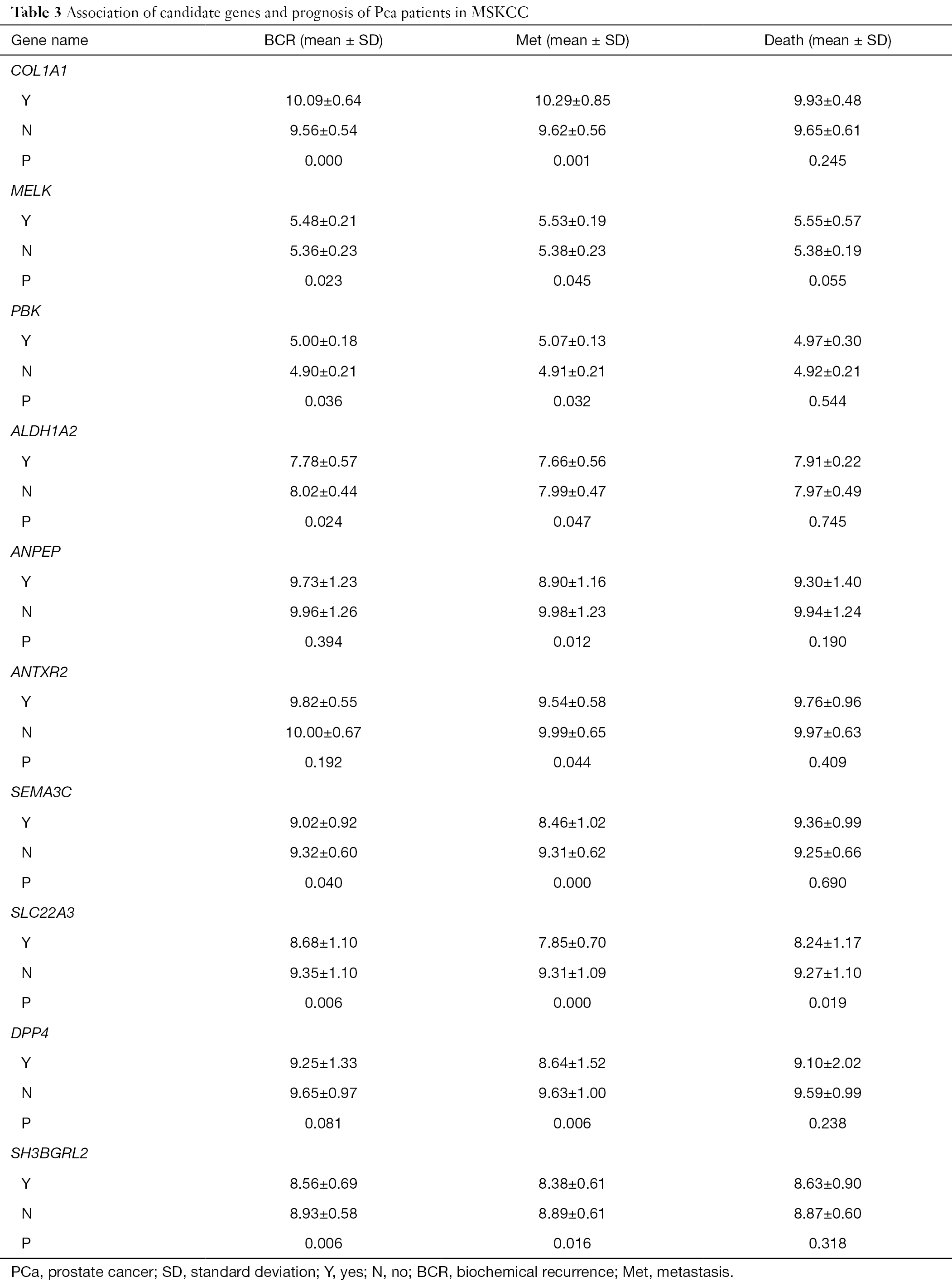 The predicative value of the single candidate gene was assessed using ROC curves. SLC22A3 had the highest AUC of 0.862, with sensitivity of 100.00% and specificity of 71.31% among the selected genes, whereas the AUC of the remaining candidates was distributed from 0.661 to 0.765 (Figure 1).

Figure 1 ROC curve of single candidate genes. SLC22A3 had the highest AUC of 0.862, with sensitivity of 100.00% and specificity of 71.31% among the selected genes, whereas the AUC of the remaining candidates was distributed from 0.661 to 0.765. ROC, receiver operating characteristic; AUC, area under curve; cut off value, the optimal threshold; Youden index, sensitivity + specificity − 1.

As shown in Table 4, multivariate logistic regression analysis was conducted to investigate the independent predictive genes. It was found that three candidates may associate with the metastasis of Pca (COL1A1, SEMA3C, SLC22A3,). However, a Bonferroni correction was performed as shown in Table 5, and the difference did not reach statistical significance among the three genes.

According to the combined predictive rate, the combination ROC curve was performed. The AUC of the combination group (AUC =0.972, sensitivity =100.00% and specificity =90.16%) was significantly higher than any candidate gene alone (P<0.05), which is illustrated in Figure 2 and Table 6.

The metastasis of PCa after RP therapy is associated with various clinical risk factors, such as tumor stage, Gleason score, SMS, LNI, as well as others (14). Due to the biological heterogeneity of PCa, it is complicated and too easily affected to use clinical factors alone as predictors for the postoperative PCa patient. It is known that all biological behavior of the tumor is accompanied by complicated genetic changes; thus, it is feasible to combine the biomarker genes to improve predictive efficiency and accuracy.

The prediction of a PCa metastasis for patients who undergo a radical cystectomy (RC) by way of a gene microarray dataset is part of precision medicine (15). The purpose for precision medicine is to identify molecular alterations in the individual cancer patients, such as the copy number alterations (CNAs), gene mutations or fusions and protein expression, to predict disease risk, and to provide optimal therapeutic options (16-18). Compared with the “one size fits all” approach, precision medicine would predict a personalized prognosis for malignant patients and tailor an individual adjuvant treatment according to their gene map landmark. Dai et al. (19) constructed an integrated diagnostic network and provided a gene panel of reasonable size to investigate the pivotal genes and the primarily hallmarks to offer novel diagnostic markers or therapeutic targets for breast cancer patients. The “Oncotype DX” system, which is based on a quantitative RT-PCR, has 21-gene signatures, and has been successfully developed to be commercially available (20). The system predicts the likelihood of a breast cancer recurrence, and helps physicians to identify the potential risk for the patient, who can obtain benefits from additional adjuvant chemotherapy before hormonal therapy. In addition, the “Oncotype DX” also has a 12-gene signature system which can be used in the application of determining the risk of a relapse for colorectal cancer patients (21). Moreover, molecular precision medicine is also used in other tumor types, such as pancreatic cancer (22), lung cancer (23,24), and hematological cancer (25).

For PCa, Hieronymus et al. (26) analyzed the genome-wide CNAs of PCa patients and found an average CNA burden of 5%. In addition, they also reported that the CNA burden was associated with BCR in adapted multivariate models. The Oncotype DX system in PCa, named the genomic prostate score (GPS) (27), assessed the RNA expression of 12 cancer-related genes (and five reference genes), which was significantly associated with disease risk. Cullen et al. (27) investigated 431 PCa patients and found the time to BCR to be closely related with the GPS in both the univariate and multivariate analyses. In addition, Cuzick et al. (28) constructed a cell-cycle progression score (also known as Prolaris) and predicted which were the high risk patients with BCR and DSS by analyzing a set of 46 genes. Obviously, it is useful and effective to apply a gene combination panel as a prognostic predictor for PCa. Several prognosis predictive systems for PCa have been applied in clinical practice, but no research regarding the relationship of CNAs and metastasis after PR has been looked into.

In our current study, 10 candidate genes were selected according to the genetically distinct LTL-313B and LTL-313H datasheets, which may reduce the bias from different individuals. The predicative values of all selected genes were distributed from 0.661 to 0.862. Based on multivariate logistic regression analysis, three genes (COL1A1, SEMA3C and SLC22A3) may associate with the metastasis of PCa, but there was no significant statistical difference based on the Bonferroni adjustment. However, The AUC of the gene combination was 0.972 with a sensitivity of 100.00% and specificity of 90.16%, which was significantly better than any candidate alone (P<0.05).

Overall, our research supports the application for the molecular prediction for PCa patients who underwent RP to aid in the selection of optimal treatment. The strength of this study was the candidate gene selection approach. The candidate genes were chosen from the paired PDX model tumor lines with different metastatic potentials, which were derived from a single PCa patient. It excluded the individual (different PCa patients) and tissue noises (primary and metastatic lesions) (29). However, there were several limitations in our study. First, retrospective research has inherent limitations. Second, the total and metastatic populations were relatively small. Finally, our observations need to be validated in a Chinese PCa patient cohort. Thus, future multi-center and large population research needs to be conducted to confirm our conclusions.

In summary, our findings suggest that the genomic microarray tests could assist in the determination of metastasis in high-risk PCa patients following a radical operation, and could help urologists to determine which optimal treatment approaches would benefit the prognosis of the PCa patient.

Funding: This study was supported by the National Natural Science Foundation of China (NSFC) (No. 81702534) and the Science and Technology Fund of Tianjin Provincial Commission of Health and Family Planning (No. 16KG156).

Ethical Statement: The study was approved by the Institute Research Medical Ethics Committee of the Tianjin medical union center (No. 2018-B02). Informed consent was not required according to our research in the study.