Pancreatic cancer is one of the mostly diagnosed aggressive malignancy around the world, with poor long-term prognosis (1,2). Pancreatic carcinoma patients are often in the advanced stage and unresectable at the time of diagnose, due to the difficulties in early diagnosis. Fewer treatment options would be feasible for them. By the latest report, pancreatic adenocarcinoma is the third cause of cancer-induced death around the world, with 5-year overall survival (OS) rate of 8%, while the survival is relative better in the localized cases with the rate of 32% (1). These patients with unresectable tumor lesions located in the celiac axis and the superior mesenteric artery without evidence of distant metastasis are diagnosed with locally advanced pancreatic cancer (LAPC). Patients with LAPC account for approximately 30% of all the cases of pancreatic carcinoma (3), with a median survival time (MST) of less than 10 months (4).

The front-line therapy options for LAPC patients are chemotherapy and radiotherapy, by which survival benefit is limited, complications and adverse events are frequency. Although some newer chemotherapy regimens like gemcitabine plus nab-paclitaxel (5), dasatinib plus gemcitabine (6), FOLFOX-6 (7,8) or FOLFIRINOX (9-11) appear and have shown a substantial survival benefit in patients with LAPC, the long-term prognosis is still poor and the heterogeneity between these studies is significant (12). Therefore, an optimal treatment for LAPC patients should provide survival benefit, alleviate pain, improve quality of life, but not cause severe compactions.

High intensity focused ultrasound (HIFU) is an emerging noninvasive ablation procedure which can ablate various solid tumors including LAPC. It can focus ultrasound energy on the target lesions and induces tumor coagulation necrosis by thermal effect (13). Several clinical trials of HIFU palliative therapy for pancreatic carcinoma cases have provided promising results (14,15). HIFU monotherapy (16-21) or in combination with systemic chemotherapy (22,23) was both proved to be able to relieve pain, and might bring an additional survival benefit with rare severe adverse events.

We designed a retrospective observational study, including the large number of patients with unresectable LAPC to date. The aim of this study was to assess the clinical benefit and safety of HIFU treatment for LAPC cases on local tumor response, quality of life and symptom intensity, in particular on relief of cancer-related pain.

The study was approved by the ethics committee of Nanjing First Hospital, and was done in accordance with the Declaration of Helsinki. Each patient signed a document of informed consent.

HIFU was performed using HIFUINT-9000 system (Shanghai A&S Sci-Tec Co., LTD, Shanghai, China), which is a US-guided device (22). Firstly, tumor location, size and morphological characteristic is identified by b-mode sonography, CT, or MRI, in the meantime, the influence of tumor on adjacent organs and blood vessels is also evaluated. Next, the detecting head of this system will complete the re-localization of the therapy area. Finally, the ablation energy focus is controlled to move along with a three-dimensional axis orderly until to cover the target lesions. The main HIFU parameters of treatment in this study were the following: input power, 5–10 kW/cm2; therapy depth, 2–15 cm; practice-focused sphere, 3 mm × 3 mm × 8 mm; unit transmit time (t1):intermission time (t2) =1:2; and HIFU times at each lesion, 8–10 times. All of the parameters can be varied depending on the depth of tumor.

The primary outcome of this study was tumor response rate. The secondary endpoints were OS, including 12-month survival rates, and safety. Tumor assessments were done with a CT or MRI scan at baseline, 1, 3, 6 and 12 months after HIFU treatment. Response was determined according to the response evaluation criteria in solid tumors (RECIST v1.1) (24). Adverse events were recorded, and the severity was graded in accordance with the CTCAE, version 4 (25).

The data are presented as the mean ± SD for normally distributed data or medians for non-normally distributed data. OS analyses of patients were conducted by Kaplan-Meier method. For more detailed descriptions of the survival, stratified analyses by the characteristics of cases were also performed. Potential clinic pathologic factors for influencing the OS rates were evaluated by log-rank test (univariate analysis) and then Cox proportional hazards model (multivariate analysis). All the data analyses were performed by STATA 12.0 software (College Station, TX, USA). P value <0.05 indicated statistically significant.

Forty-six patients were finally enrolled in our study. The cases were consisted with 30 males and 16 females, with median age of 64 years (58–86 years). Median Karnofsky Performance Status (KPS) was 70, in which 37 cases ≥60 and 9 cases <60. Numerical rating scale (NRS) was commonly scored from 4 to 6 for majority cases (26/46), followed by a score interval of 1 to 3. A majority (36/46) of the tumors were located in the head of pancreas, and the most patients (31/46) were diagnosed as IV stage pancreatic cancer. Per-HIFU treatment, 4 patients received surgery, 28 cases received chemotherapy, including gemcitabine, cisplatin, and paclitaxel (GCP), docetaxel and cisplatin (DP), gemcitabine and cisplatin (GP), FOLFIRINOX, etc. Nineteen patients received targeted therapy (apatinib, endostar, or bevacizumab), and 10 received radiotherapy. The details of baseline characteristics of patients and tumors were described in Table 1. 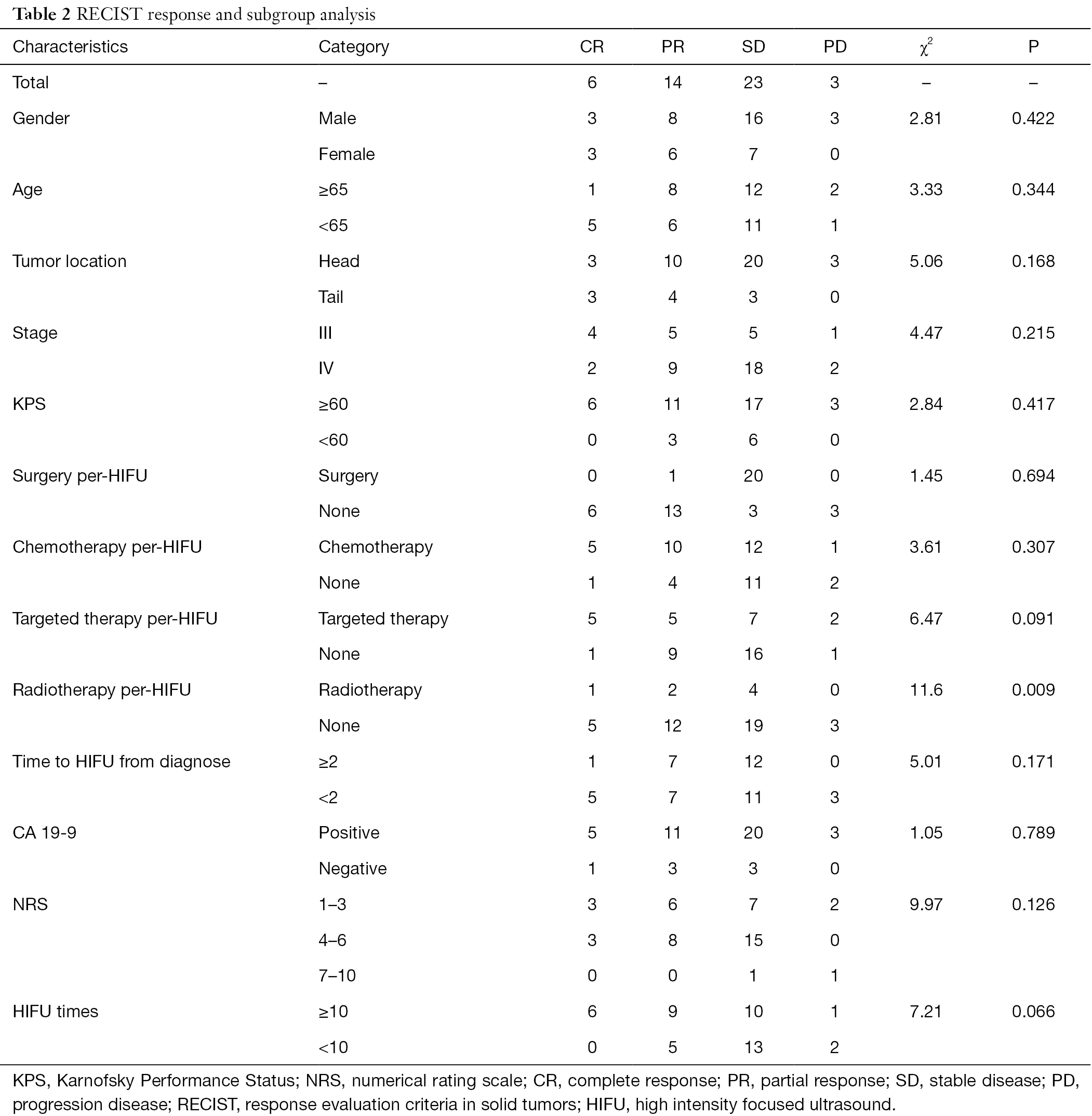 We conducted stratified analyses of response status by patients and tumors characteristics, finding that receiving radiotherapy per-HIFU might affect the response rate, while other factors did not reveal any influence on objective response.

Median OS was 9.7 months, with 95% CI, 7.9–13.2 months. The 1-year survival rate was estimated to be 46.69% (95% CI, 31.71–60.34%). Stratified analyses of MST and 1-year survival rate by gender, age, tumor location and other factors were performed to illuminate this issue in details, besides, log-rank test were also conducted. As presented in Table 3, age <65 years, tumors located in the tail of pancreas, stage III, receiving targeted therapy per-HIFU, time to HIFU from diagnose <2 months, and receiving HIFU therapy for more than 10 times was significant associated with the improvement of MST and 1-year survival rate (log-rank P=0.043, 0.0003, 0.045, 0.005, 0.0009, and 0.007, respectively). However, multivariate analysis with Cox proportional hazard regression model did not reveal any increased risk caused by patients’ characteristics (Figure 1). 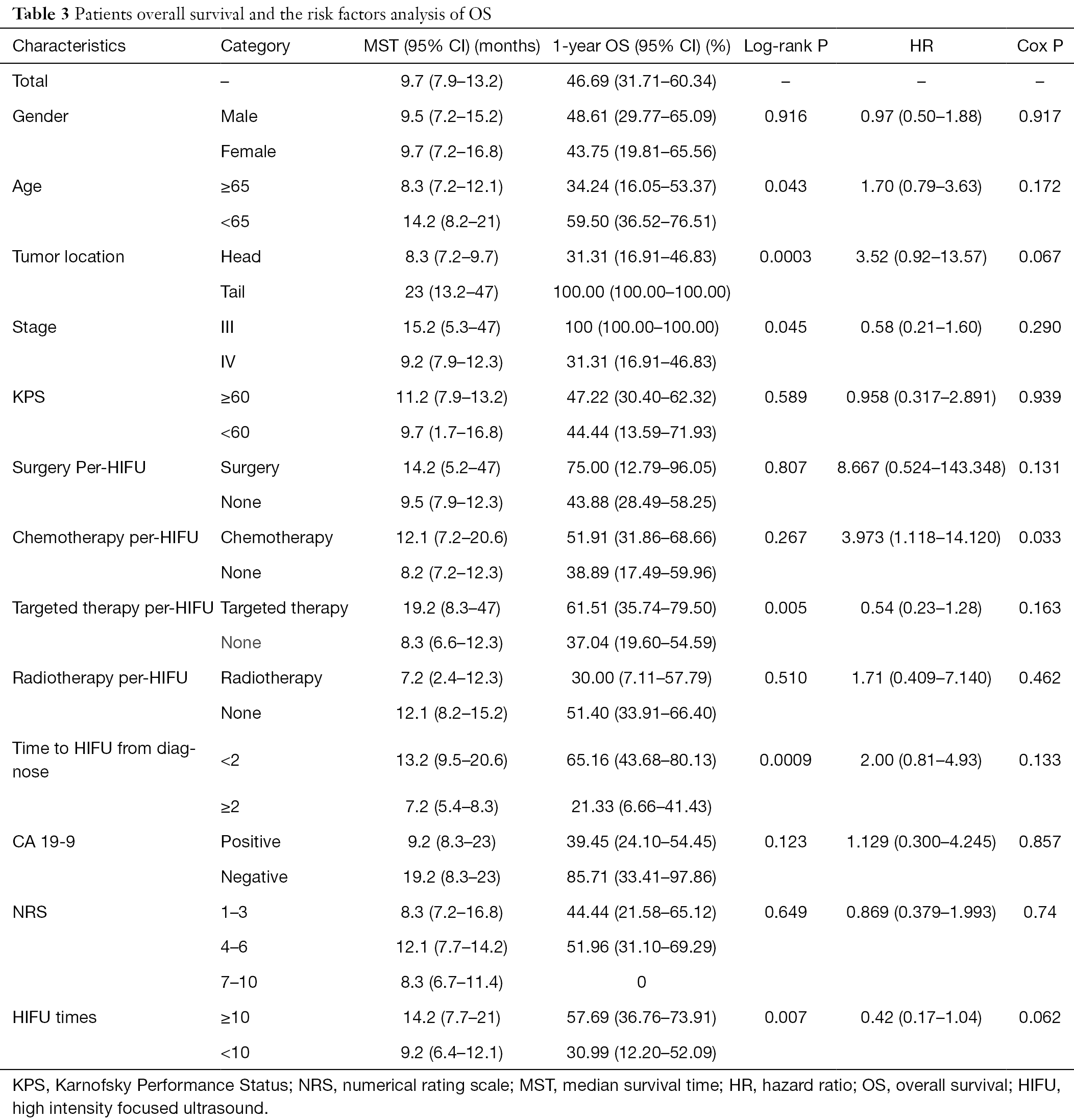 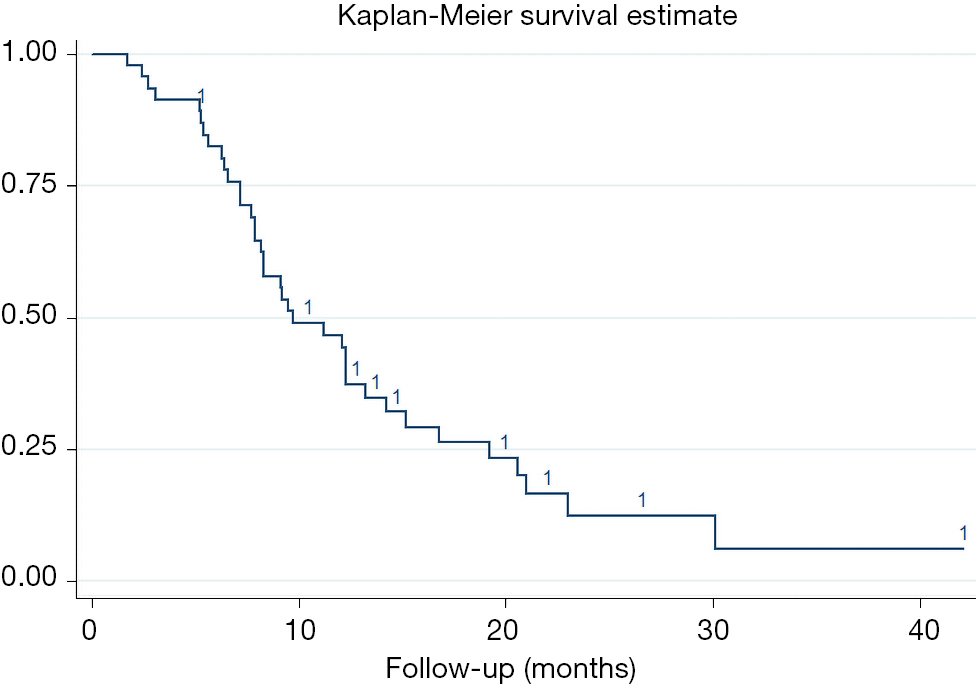 Figure 1 Kaplan-Meier survival curve of all the 46 patients.

All the reported AEs were listed in Table 4. Very few cases reported complications included fatigue [2], abdominal pain [2], fever [1], GI bleeding [1]. What should be mentioned is that no skin burns were complained by any patient in our study. There was no occurrence of acute pancreatitis or peritonitis post-HIFU treatment during the follow-up period. Moreover, no case withdrew from this research because of the side effects and no treatment-induced death was found. 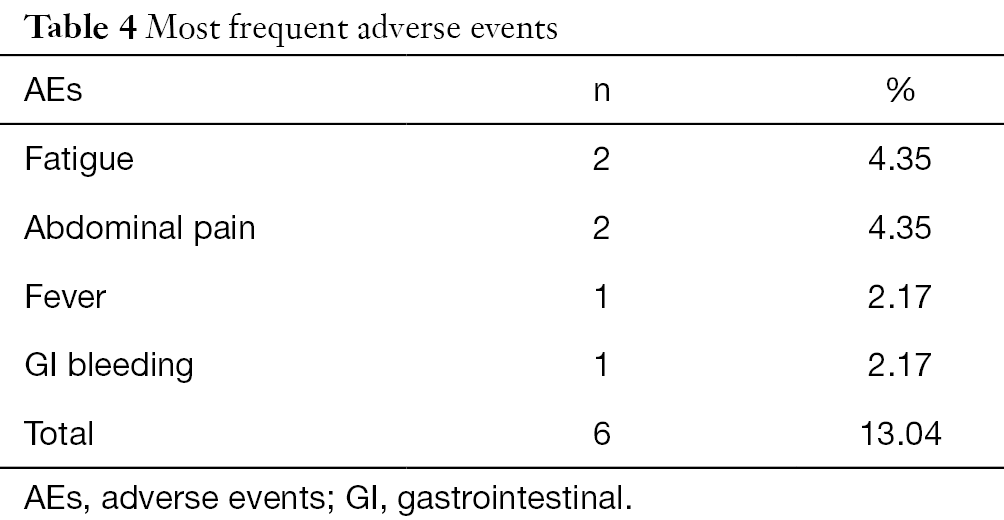 Primary pancreatic cancer is often unresectable at the time of diagnosis and has a poor long-term prognosis, notwithstanding recent advances in chemotherapy and radiation therapy (26). Although percutaneous ablation methods have been successfully applied for the treatment of hepatic and renal tumors and are now clinically acceptable alternatives to surgery in selected patients (27), similar procedures are not yet considered by current treatment guidelines for pancreatic cancer (28), possibly because of the significant risk for massive pancreatitis or collateral damage to neurovascular structures (29,30),

Ablation with HIFU is a non-invasive procedure (16,31) based on the principle that focused ultrasound (US) beams cause coagulation necrosis in the target. Multiple retrospective non-randomized studies and case series on US-guided HIFU for pancreatic cancer have been reported to date, nearly all coming from Asia, especially China (19,20,22,32).

As a golden standard treatment for LAPC patients, first-line treated with gemcitabine, were reported to have a median OS between 5.6 and 9.2 months in numerous high quality randomized controlled trials (33-39). HIFU treatment might prolong survival of patients, with a great improvement comparing with gemcitabine monotherapy. The 1-year OS rate of 46.69% in this study is comparable with chemotherapy and radiotherapy in LAPC (23,40). In a study by Zhao et al. (41) in 2017, the 6-month OS was 44.4% to 100%, and 12-month OS was 11.1% to 35.4% by HIFU treatment, which is also numerical inferior to our results. Some factors should be considered, including sample size, statistical power, and baseline to be contribute to this difference.

Stratified analyses were performed to illustrate the survival status of HIFU treatment in details and aim to identify the subgroups who would obtain more clinical benefits form HIFU. Similar analyses were not described in other reports with same theme (15,22,23,40-44). Our results suggested that age <65 years, tumors located in the tail of pancreas, stage III, receiving targeted therapy per-HIFU, time to HIFU from diagnose <2 months, and receiving HIFU therapy for more than 10 times might associated with the improvement of MST and 1-year survival rate. This might be significant in clinical practice when we choice a patient though multivariate analysis did not support these potential association.

In terms of the adverse events, during and after HIFU therapy, no serious adverse reactions were observed by us. Treatment-related complication as well as treatment cycle was significantly reduced compared with chemotherapy or radiotherapy (45,46). Meanwhile, recent reports have reported certain HIFU-related complications, especially skin burn. But our results did not reveal any evidence of skin burn complication. The might be caused by the difference of HIFU equipment. As far as our knowledge goes, the device of HIFUNIT-9000 applied in our clinical practice, adopts dual focus mode, the energy upon the skin could be reduced effectively during operation comparing with other equipment.

Several limitations of this study should be acknowledged. First, our results came from a single center, non-blinded observation study, which would not be highest quality evidence of clinical practice. Second, our sample scale is relatively small, and the follow-up period is relatively short. Therefore, top-level designed trails with a larger sample size is needed. Nevertheless, our investigation has provided a reliable clinical evidence for the new direction of LAPC ablation treatment.

In conclusion, our encouraging results further confirmed the efficacy and safety of HIFU treatment for patients with LAPC. HIFU might be one of the optimal therapies for LAPC. However, further well-designed double-blind, randomized controlled trials are wanted to evaluate the clinical efficacy of HIFU ablation, especially in combination with chemotherapy or radiotherapy.

Funding: This work was supported by Science and Technology Development Fund of Nanjing Medical University (2017NJMUZD102).

Ethical Statement: All procedures performed in studies involving human participants were in accordance with the ethical standards of the Nanjing First Hospital (No. NJMU-201301-041). Informed consent was obtained from all individual participants included in the study.