The cervical squamous cell carcinoma (CSCC) accounts for nearly two-thirds of all cervical cancer cases, which is a common malignancy threatening the health of Chinese females (1,2). Currently, patients with early (stages I–IIA) CSCC are mainly treated with radical surgery and could achieve a 5-year overall survival (OS) of 94.6% (3). Oppositely, even after multimodality treatment based on radiotherapy, the 5-year OS of patients with locally advanced (stages IIB–IVA) CSCC still emerges as 65.8–75.7% (4). Distant metastasis (DM), rather than local recurrence (LR), is the main cause of treatment failure in these patients. Totally 19.2–22.5% of them will develop DM (4,5). In other words, prognosis of locally advanced CSCC could be improved through eradicating DM.

Intensified systemic treatments, such as adjuvant chemotherapy (ACT) after concurrent chemoradiotherapy (CCRT), were tried to reduce DM from cervical cancer, including CSCC. But insufficient evidence is found to support routine use of ACT, which is convinced to bring more haematological toxicities (6). So it is necessary to identify the cases really at high risk of DM and in need of ACT. The golden standard to predict prognosis of cervical cancer is now the International Federation of Gynecology and Obstetrics (FIGO) stage (7). However, controversies are often seen between the clinical outcomes of patients and their FIGO stage (8). The possible explanation may be that the FIGO staging system is based merely on anatomical range of tumor invasion. Functional factors which reflect biological behavior of tumor cells are not taken into consideration.

Serum lipids are practical functional biomarkers used in daily clinical work. Recent studies proved that pretreatment level of some serum lipoproteins and their core component, apolipoproteins, were associated with the prognosis of many solid tumors (9-12). However, there are few researches reporting how these factors influence DM and death from CSCC. Hence, this study aimed to evaluate the prognostic value of serum lipid profile in patients with locally advanced CSCC.

Patients with pathologically diagnosed and previously untreated CSCC in our hospital from January 1st 2011 to June 30th 2013 were initially considered. The patients were enrolled into this study if they had age ≥18 and <75 years old, stages IIB–IVA disease at diagnosis [FIGO criteria ver. 2009 (7)], and complete record of radical CCRT. The exclusion criteria included: (I) Karnofsky performance score <70; (II) severe hematopoietic, heart, lung, liver or kidney dysfunction unsuitable for radiotherapy; (III) prior history of other malignancies; (IV) hyperlipidemia, diabetes and regular intake of lipid-modulating drugs, such as niacin and statins.

All the patients were treated according to the clinical practice guidelines of our hospital and the National Comprehensive Cancer Network. The procedure of radiotherapy consisted of an external beam radiation (EBRT) and a high-dose rate brachytherapy (BT). The ERBT was performed with a 3-dimensional conformal radiotherapy (3DCRT) or intensity-modulated radiotherapy (IMRT) technique. The gross tumor volume (GTV) was the enlarged lymph nodes visible on MRI. The clinical target volume (CTV) covered the GTV with a radial margin of 2 cm, and included high-risk regions of lymphatic drainage (the paracervical, the obturator, the presacral, and the lateral, internal and common iliac lymph node regions). The EBRT was done in a conventional fractionation (2 Gy per fraction, 1 fraction per day, 5 days per week), in which the total dose for GTV and CTV were 60 and 45 Gy respectively. The regimen of chemotherapy concurrently with ERBT was single-agent cisplatin of 40 mg/m2 weekly (totally 4–5 weeks). After EBRT, 2-dimensional BT (iridium 192, microSelectron, Nucletron) was performed one fraction per week for 6 weeks. In each fraction, a dose of 6 Gy was administered to point A.

Serum lipid profile of each patient was tested one week before treatment, including level of total cholesterol (TC), triglyceride (TG), high-density lipoprotein cholesterol (HDL-c), low-density lipoprotein cholesterol (LDL-c), apolipoprotein A-I (apoAI) and apolipoprotein B (apoB). The testing was performed by using a LABOSPECT 008 automatic biochemistry analyzer and its matching detection kit (HITACHI, Tokyo, Japan), according to the manufacturer’s protocols. The abnormality of each index was determined on basis of our hospital’s cutoff value standard. The upper limit of TC, TG LDL-c and apoB were 6.47, 1.7, 3.1 mmol/L and 1.1 g/L, respectively. And the lower limit of HDL-c and apoAI were 1.29 mmol/L and 1.2 g/L, respectively.

After treatment, the patients were followed up every 3 months from the 1st to the 3rd years, through outpatient interview. The main contents of outpatient interview included complete physical examination, cervicothoracic CT, abdominopelvic MRI, serum SCC antigen and CA125 assessment, and whole-body bone scan (or PET). From the 4th to the 5th years, follow-up was made semi-annually through outpatient interview or telephone. After the 5th year, follow-up was made annually until death or March 31st 2018, whichever came first. Causes of death were confirmed by death certificates, which were supplemented with medical records if necessary.

The primary endpoint of this study was the OS, which referred to the percentage of the patients who were alive after a certain time period from pathological diagnosis. And the secondary endpoints included the local-recurrence-free survival (RFS), the distant-metastasis-free survival (MFS) and the disease-free survival (DFS). These 3 endpoints were defined as the percentage of patients who had no corresponding events after a certain time period from diagnosis. The events for the RFS and the MFS were LR and DM, respectively. And the events for the DFS included death, LR and DM.

The factors above were firstly tested for their impact on the OS, the RFS, the MFS and the DFS, through a univariate survival analysis based on Kaplan-Meier approach and log-rank test. The factors exhibiting statistical significance were then tested their predictive independence, through a multivariate analysis based on Cox proportional hazards model. The hazard ratio (HR) and 95% confidence interval (CI) of each independent prognosticator were calculated.

Finally, serum lipid indexes exhibiting predictive independence were analyzed for their correlation with other clinical characteristics, based on Spearman’s correlation analysis.

The statistical analyses were all made using IBM SPSS Statistics 23.0 (IBM Co., Armonk, New York, USA). A difference with a two-sided P value of less than 0.05 was considered to be statistically significant. 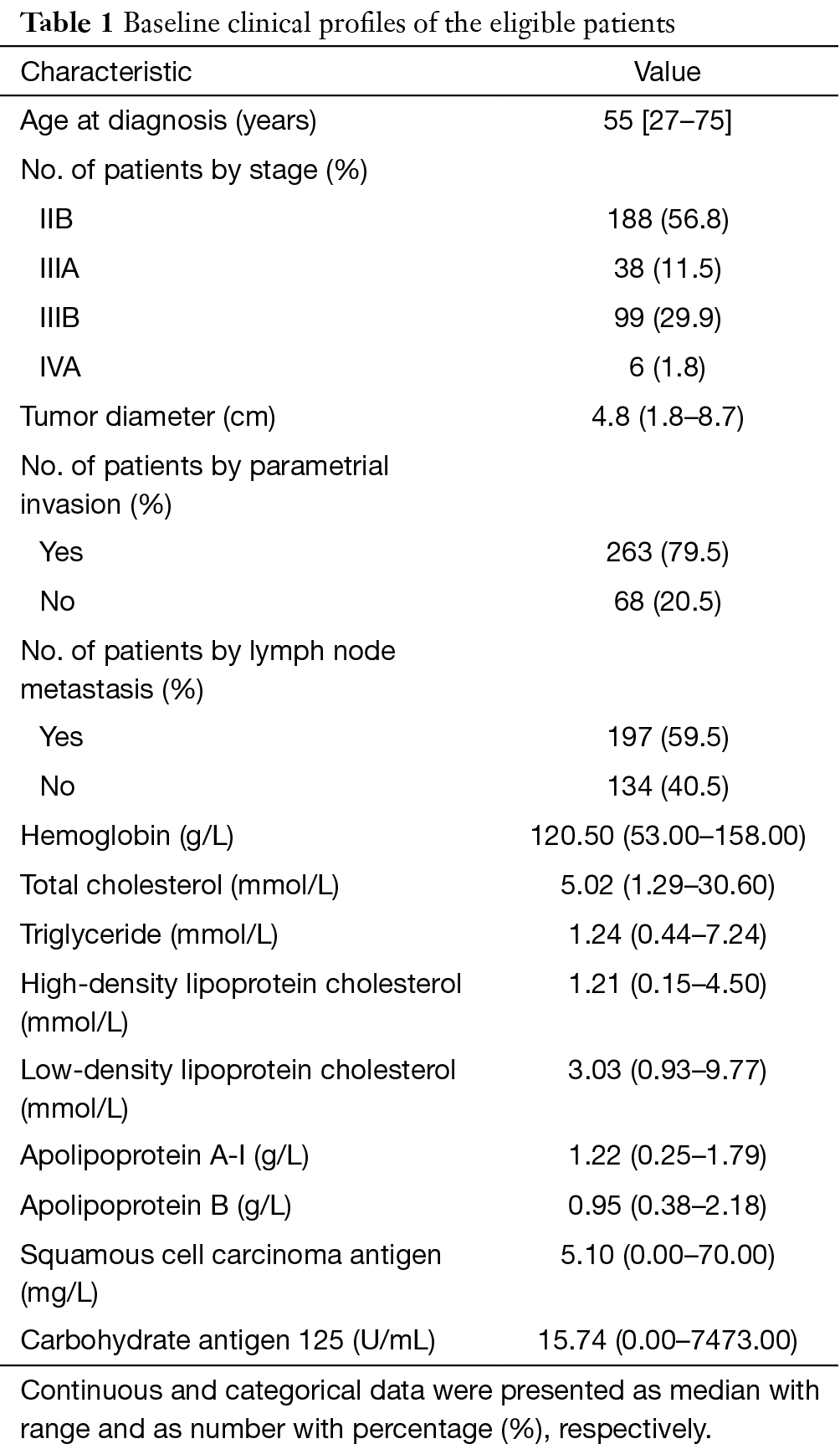 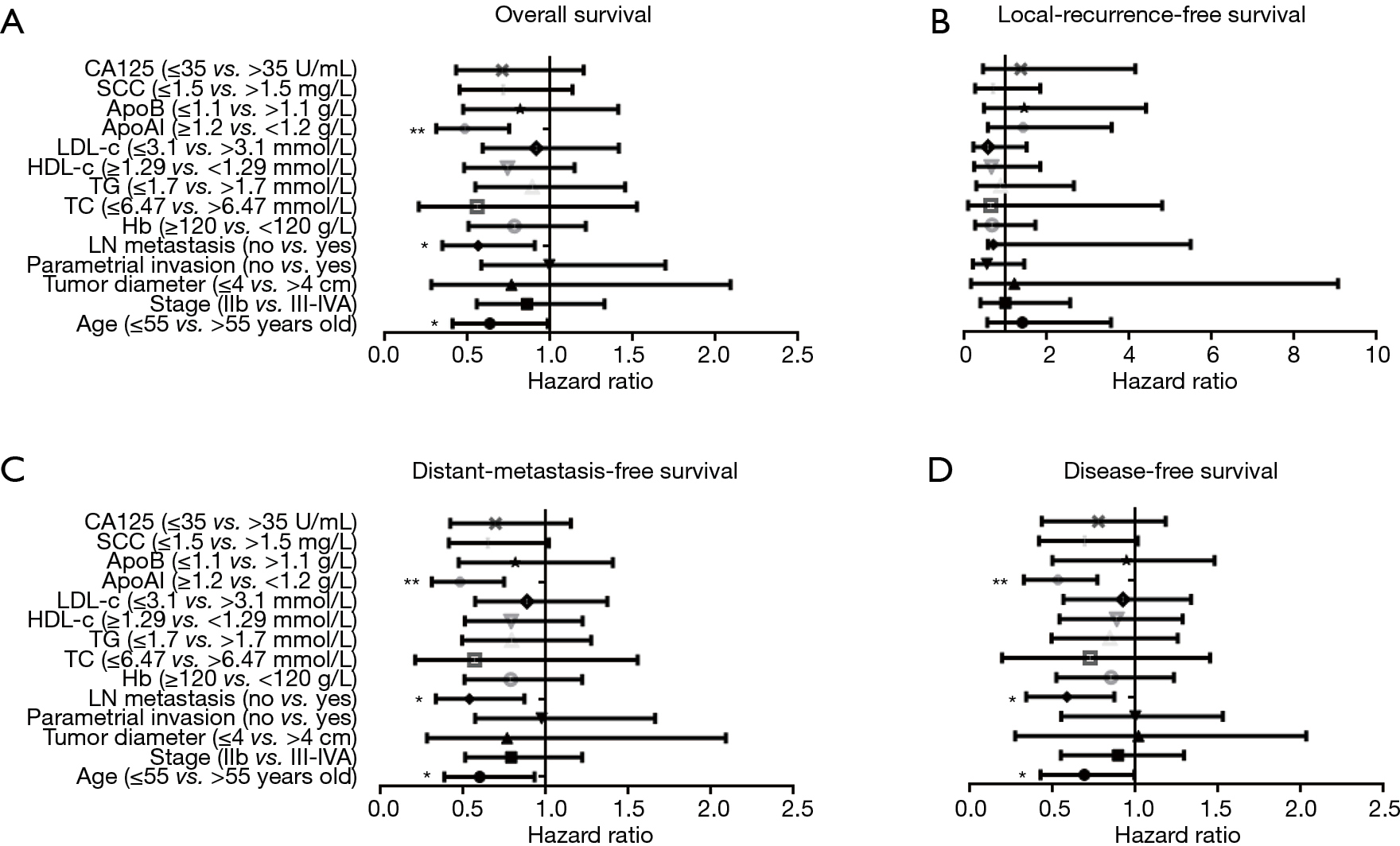 The role of serum lipid components in cancer progression and treatment is one of the research hotspots these days. Until now, there has been only one study focusing on the prognostic value of serum lipid profile in cervical cancer. That study reviewed a small cohort of patients to report that apolipoprotein C-II might be associated with their long-term outcome after CCRT (13). In this study, pretreatment levels of serum lipids were analyzed for their association with prognosis of stages IIB−IVA CSCC, together with known prognosticators of cervical cancer. We found that low level of serum apoAI level predicted a poorer OS, DFS and MFS independently. The results were based on a relatively large-scale cohort and thus reliable. Considering that serum apoAI could be easily detected in daily clinical work, our study provided a practical predictor for locally advanced CSCC treated with CCRT. Except apoAI, none of the serum lipid indexes emerged as predictors of CSCC prognosis.

Due to advance of radiation technique, local control of CSCC, even locally advanced disease, has been greatly improved. According to our results, the LR rate was only 5.4% after nearly a follow-up time of more than 4 years. In contrast, the DM rate was as high as 25.1%. And all the 81 cancer-deaths harbored DM. It was similar to prior studies that DM had become the primary cause of CSCC-related death. Predictive ability of serum apoAI on the MFS made it an index to evaluate not only patients’ survival but also DM risk. Those with pretreatment low level of serum apoAI might be at a high risk of DM. These patients might achieve survival benefit from intensified systemic therapies aiming to eradicate DM, such as ACT. In other words, serum apoAI could be used to direct individualized treatment of locally advanced CSCC. Actually, before our study, the association between serum apoAI level and DM has been showed in other malignant tumors. For example, Ma et al. found in 443 patients with hepatocellular carcinoma that low serum apoAI was found to be associated with a higher level of circulating tumor cells (15). And in a study by Quan et al., a relationship was seen between low serum apoAI and DM progression of colorectal cancer (16).

The biological fundamentals to explain the impact of serum apoAI on DM are awaited to be elucidated. Yet, there have been studies exhibiting anti-tumor activities of apoAI. Wang et al found that ApoAI concentration was significantly lower in serum samples of patients with esophageal SCC than in those of healthy controls (17). Elevation of serum apoAI level were also reported in ovarian cancer (18,19). In lab studies, Zamanian-Daryoush et al. demonstrated that apoAI could inhibit tumor growth through knocking out apoAI gene of nude mice. Not only that, provision of exogenous apoAI could even lead to shrinkage of xenograft tumor (20,21). There were also studies to explore how apoAI exerted its anti-tumor functions. The possible mechanisms included decreasing tissue concentration of survivin protein, recruiting myeloid-derived suppressor cells, promoting accumulation of macrophages with an M1-like anti-tumor phenotype as well as CD8+ T cells, reducing level and activity of metalloproteinase-9, inhibiting tumor angiogenesis, and depressing inflammation (20-24).

The anti-tumor activities of apoAI provided a new idea to manage CSCC. That was to use apoAI as a therapeutic target. Currently, the interfering modalities of serum apoAI are well developed. The lipid-modulating agents, such as niacin and statin, have been maturely used to elevate serum apoAI concentration (25,26). Moreover, a reconstituted human apoAI, the CSL112, was confirmed by Phase 2 clinical trials to be safe when used intravenously (27,28). Hence, it is feasible to treat malignancies through apoAI. Recently, Park et al. have investigated 114,116 healthy individuals and found that niacin intake could reduce the risk of skin SCC (29). And statin was found in a series of studies to improve the prognosis of colon and gynecologic cancers, including cervical cancer (30-32). In this study, patients with locally advanced CSCC and low serum apoAI were more likely to develop DM. ApoAI-elevating therapies might be beneficial for these patients. Namely, our results were informative for clinicians to conduct trials focusing on apoAI-targeting treatment in locally advanced CSCC.

Indeed, there were several shortcomings of this study. First, this study was a single-institutional, retrospective study. Second, BT in this study was performed in a 2-dimensional style. It was mainly limited by the technique conditions of our hospital at that time. Hence, we proposed that the results of this study should be popularized with cautions before validation in prospectively enrolled, multi-institutional cohorts treated with BT based on 3-dimensional technique.

In conclusion, low pretreatment level of serum apoAI emerged as an independent predictor of DM and poor prognosis in patients with stages IIB–IVA CSCC. This finding might help clinicians to direct therapy for eradicating DM and conduct clinical trials on apoAI-targeting anti-tumor therapies.

We are grateful to Dr. Christopher Lavender (the Office of International Cooperation and Public Relations, Sun Yat-sen University Cancer Center, Guangzhou, China) for his help in polishing our manuscript.

Ethical Statement: This study was approved by the Institutional Review Board of the Sun Yat-sen University Cancer Center (YP2008008). Written informed consents were obtained from all individual participants included in the study.