Lung cancer has the highest mortality rates among all cancers due to its late diagnosis (1). The routine techniques for lung cancer diagnosis include low-dose computed tomography (LDCT), sputum cytology testing and chest X-ray (2). While a LDCT can detect tumors at an earlier stage and help reduce the tumor mortality rate by up to 20% (3), CT-based diagnosis of lung cancer has a significant false-positive rate (4). Meanwhile, traditional serum biomarkers, such as neuron-specific enolase (NSE) (5), carbohydrate antigen 125 (6) and carcinoembryonic antigen (CEA), play critical roles in the diagnosis and prognosis of lung cancer patients despite their low sensitivity and specificity which range between 50% and 60% (7,8). Thus, novel, economical and noninvasive biomarkers are urgently needed for early diagnosis of lung cancer (9).

The enzyme, γ-glutamyl transferase (GGT), is associated with many disease outcomes (10) and has a prognostic value for various cancers (11). Ma et al. reported that elevated serum GGT levels in hepatocellular carcinoma patients treated with radiofrequency ablation may serve as a prognostic marker to predict significantly decreased overall survival (OS) and recurrence (12). A study of several serum biomarkers in metastatic colorectal cancer, including GGT, alkaline phosphatase, and CEA, showed that combination of GGT and CEA have prognostic value to predict overall and progression-free survival (13). Kunutsor and Laukkanen found that increased GGT level contributed to poor prognosis in middle-aged prostate cancer patients (14), while another study also indicated that serum GGT level is a novel independent factor for poor prognosis of renal cell carcinoma (15).

However, a systematic analysis of the association between circulating GGT and the survival status of lung cancer patients has not yet been conducted. The present study retrospectively investigated GGT serum levels in Chinese lung cancer patients to determine whether it can be feasibly used as a prognostic parameter.

Lung cancer patients treated at the Pneumology Department of West China Hospital (Chengdu, China) between January 2008 and July 2012 were enrolled in the present study. All patient medical information was obtained from a prospective database. Exclusion criteria included lack of GGT level data, pathological cancer confirmation, follow-up data, evidence of lung cancer metastasis. Metastasis was determined by biopsy and whole-body CT scan. Survival time was determined as the time from disease diagnosis to the date of death or last follow-up by telephone inquiry. Tumor stages were defined according to the 7th edition of Tumor-Node-Metastasis staging (16). Subtype classification of lung cancer, especially ADC, was based on the 2015 WHO classification (17).

Serum GGT concentration was assessed by an immunoassay in the Medical Laboratory Department of the West China Hospital before surgery or any other treatment. Patients were classified into two groups (positive and negative) based on a serum GGT cut-off value of 40 U/L, which is widely recognized as the normal level. Patients in the positive group had a serum GGT level of ≥40 U/L, whereas patients in the negative group had a GGT level of <40 U/L. A correlation analysis of pretreatment serum GGT levels and clinical parameters (e.g., gender, age, smoking status, tumor type, tumor stage, and distant metastasis) was performed for patients classified as having lung cancer, adenocarcinoma (ADC), and squamous cell carcinoma (SCC). The relationship between serum GGT levels and survival prognosis was also investigated. A multivariate Cox regression model was used to determine whether serum GGT levels could serve as a prognostic parameter for lung cancer.

Before operation initiation, as part the of routine pre-treatment, blood samples were drawn so as to evaluate the hepatic damage, and other biochemical tests. The period occurred about 24 to 48 hours before starting the specific therapy by way of a peripheral venous puncture. We examined and analyzed GGT concentrations using an enzymatic colorimetric test at 37 °C. The identical conditions were used for L-g-glutamyl-3-carboxy-4-nitroanilide substrate (18). 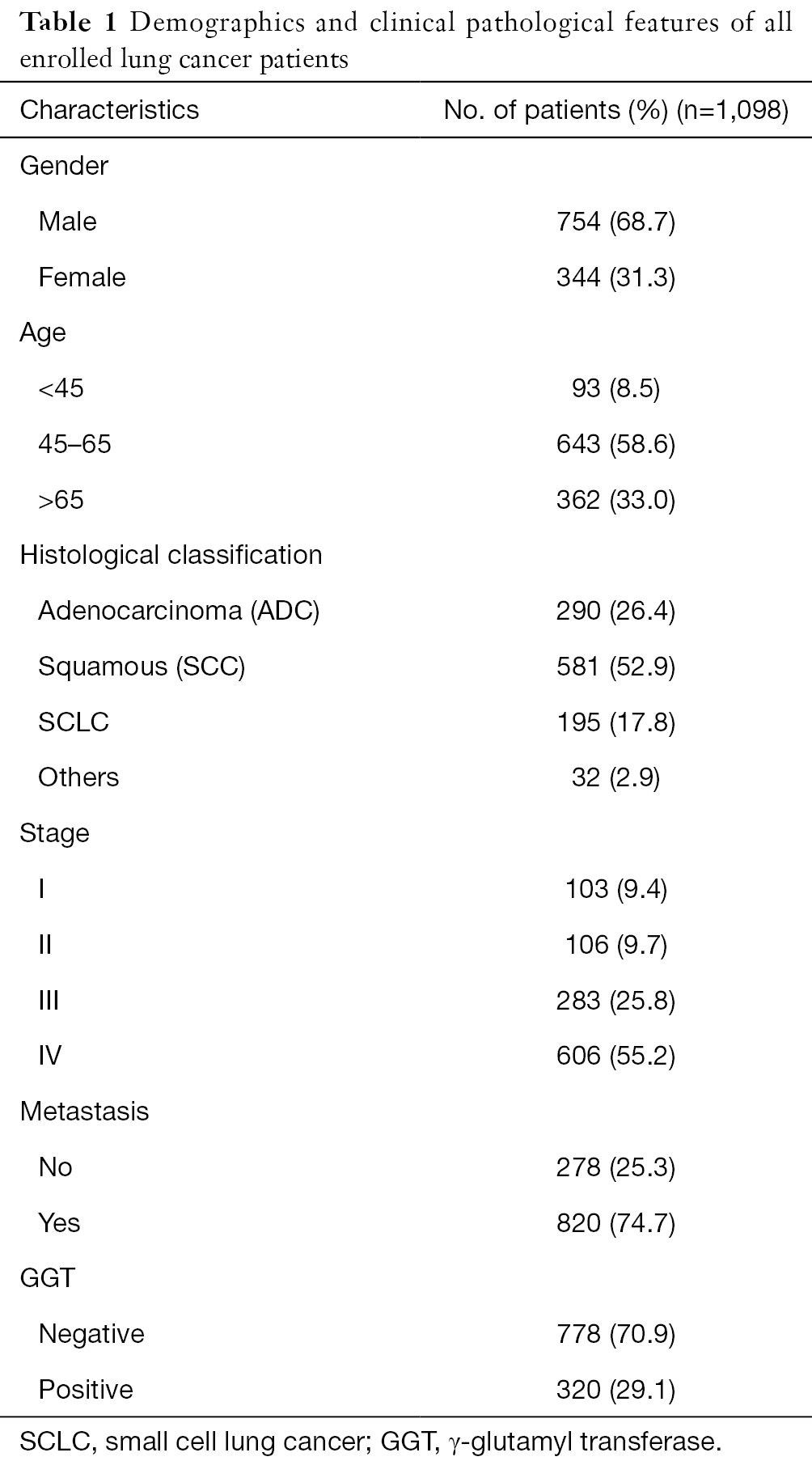 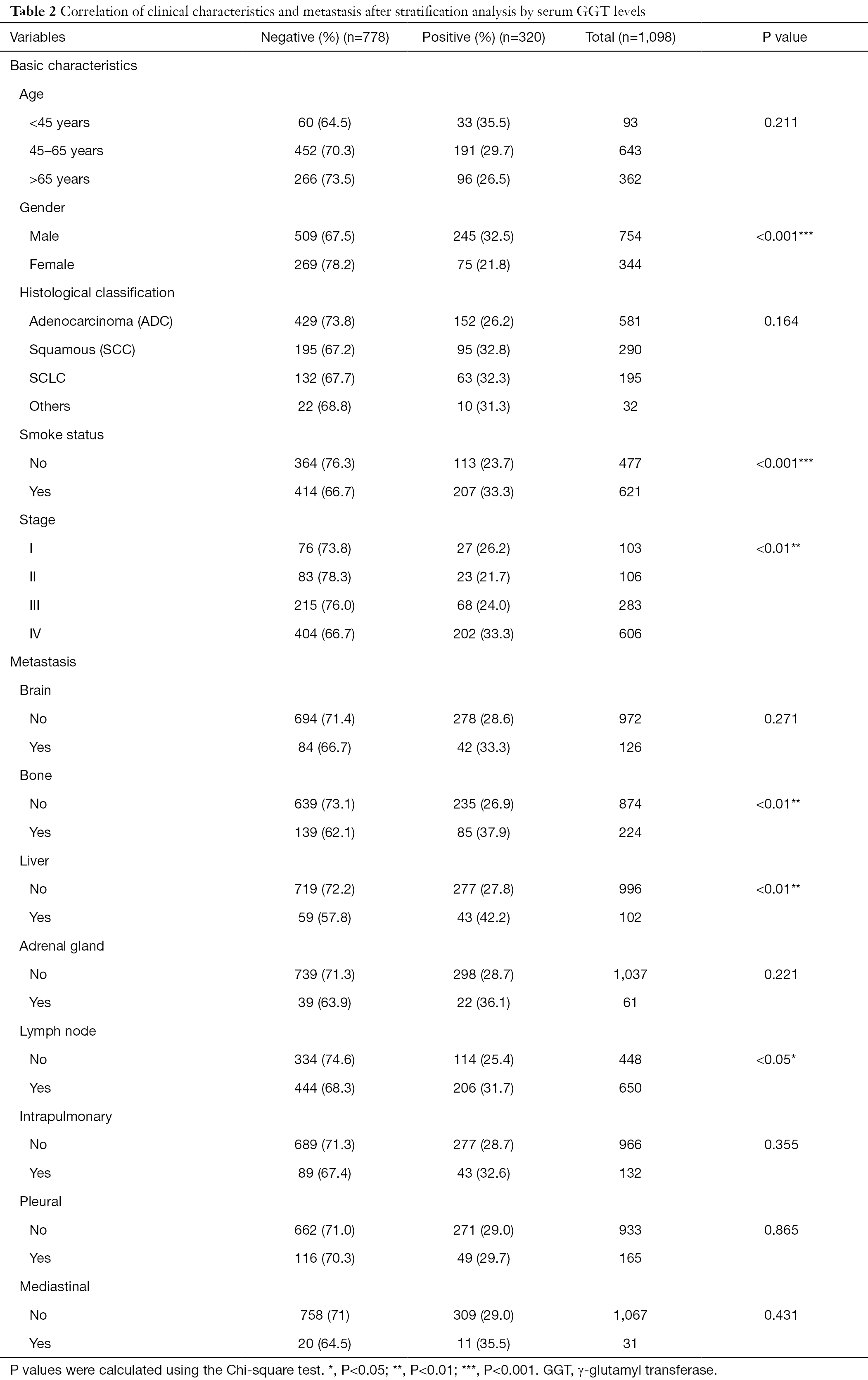 Correlation between GGT levels and metastasis incidence in ADC and SCC 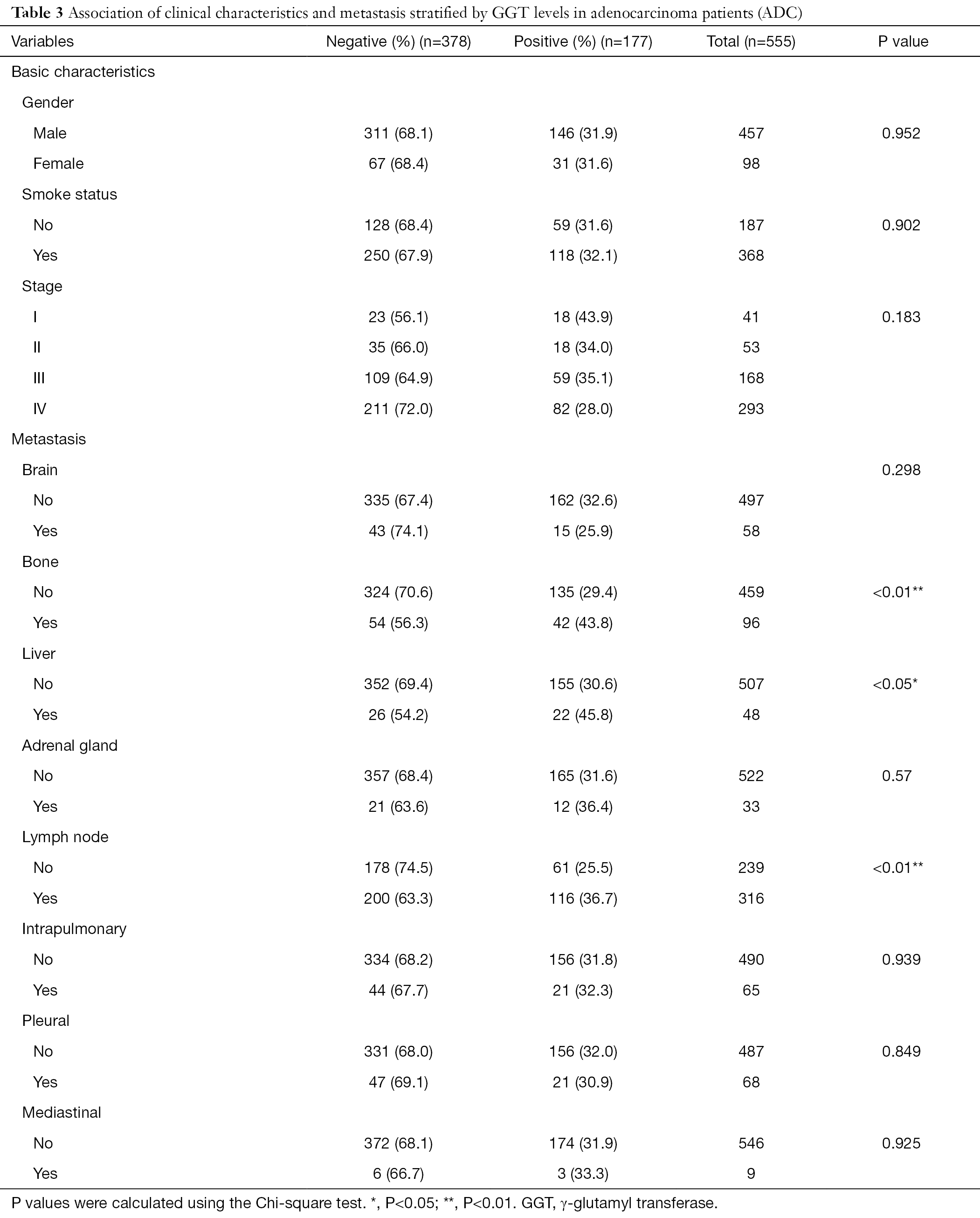 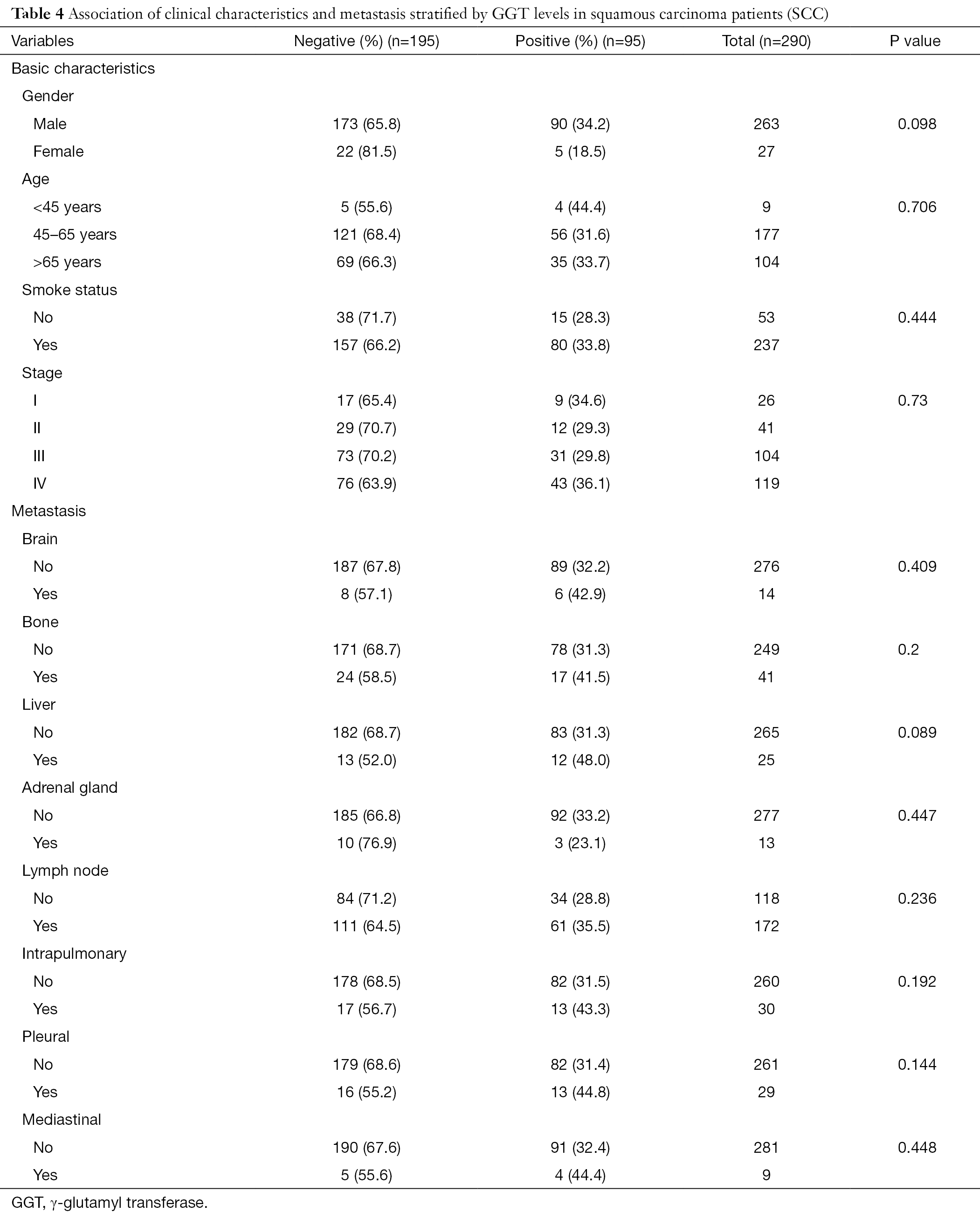 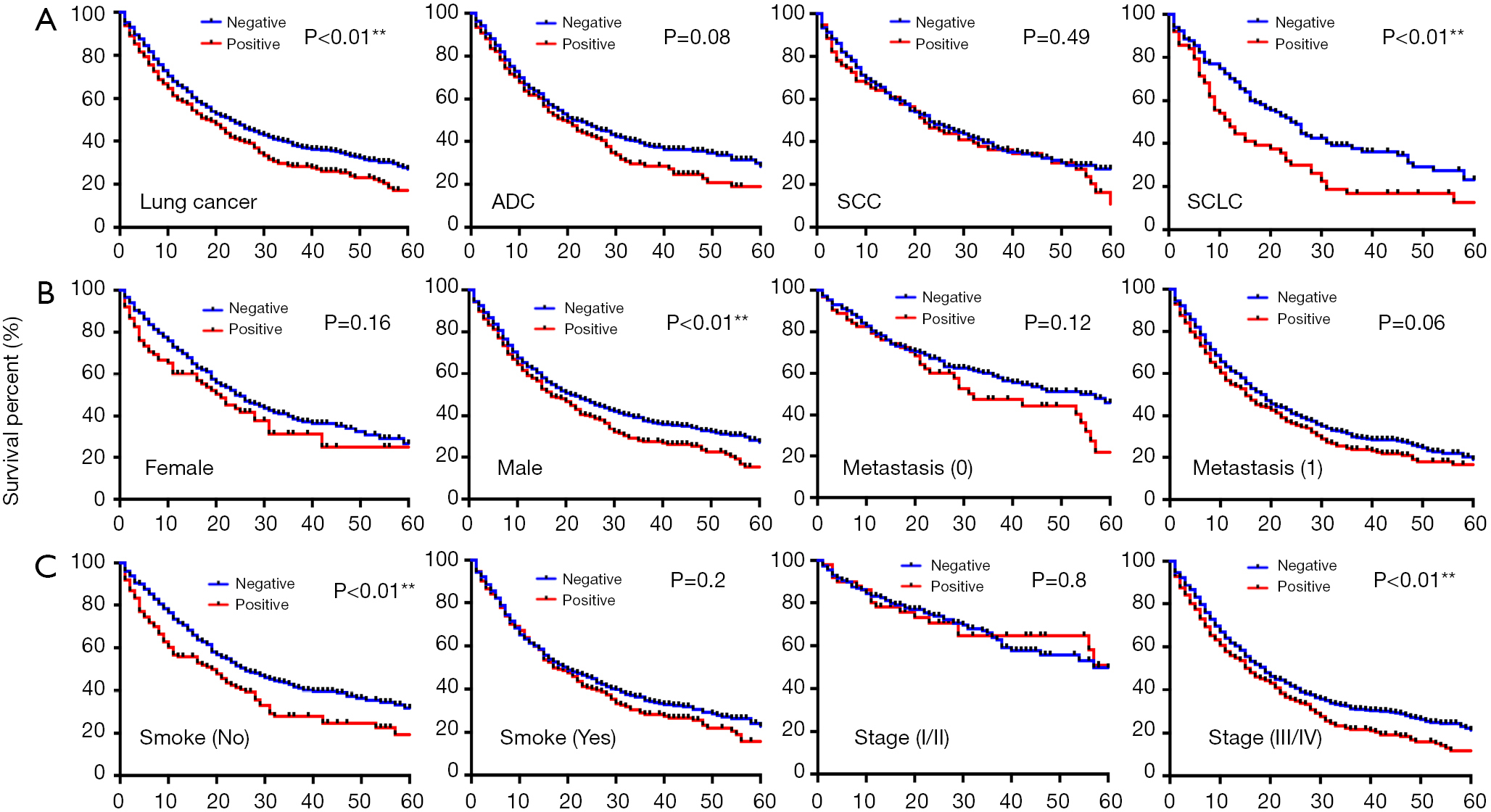 Although the prognostic value of serum GGT level in several tumors has been identified, the value concerning poor prognosis for lung cancer has not yet been determined. In our study, a large-scale population was classified into negative and positive groups. Here, we found that elevated serum GGT levels were more strongly associated with clinicopathological parameters, such as gender (P<0.001), smoking status (P<0.001), and tumor stage (P<0.01). Other clinical-pathological features showed no significant difference. Moreover, serum GGT levels showed a dramatic correlation with metastasis to the liver (P<0.01), bone (P<0.01), and lymph nodes (P<0.05) (Table 2), and a similar relationship was even more pronounced for ADC patients. The results revealed that high serum GGT levels were positively associated with metastasis (bone: P<0.01; liver: P<0.05; lymph node: P<0.01) (Table 3). Elevated GGT levels also positively correlated with the patient’s OS rate for all lung cancer and subtypes (P<0.01), specifically SCLC (P<0.01) but not with ADC or SCC, males (P<0.01), smoking status (P<0.01), and tumor stage (P<0.01) (Figure 1A,B,C). These results are mostly consistent with previous studies in sex difference. In one study of serum GGT and coronary artery calcification (CAC) (19), elevated GGT level was an independent and reliable indicator for males but not females, with the key difference being attributed to more alcohol consumption in men compared with women (20). However, there is another interesting study with contrasting results. In Kim’s study, the results revealed that elevated GGT level indicated poor clinical outcomes in females (21). In addition, GGT was strongly associated with incidence of tumor. It has also been reported that GTT can mediate GSH metabolism to produce lipid peroxidation, thus explaining the correlation between high GGT and poor prognosis (22). Furthermore, serum GGT levels were found that is not independent poorly prognostic factor (Table 5).

GGT is a well-known marker of apoptosis and cellular detoxification (23) which has a remarkable relationship with metabolic syndrome, cardiovascular disease and diabetes (24). Highly active enzymes, like GGT, are secreted from organs, such as the liver, kidneys, and pancreas (25). An increasing number of clinical studies have demonstrated there to be an association between GGT and a poor survival (26) rate. Previously, Staudigl et al. showed that serum GGT levels could serve as a distinct prognostic parameter for breast cancer patients with metastases (18). In an analysis of 411 intrahepatic cholangiocarcinoma patients, Yin et al. found that high serum GGT levels could serve as a poor prognostic indicator for predicting invasive tumor behaviors (27). Yang et al. showed that serum GGT levels correlated with poor prognosis and the development of high-grade esophageal epithelial dysplasia in 639 patients (28). In patients with non-metastatic renal cell carcinoma with venous tumor thrombus, Luo et al. demonstrated that pre-operative GGT levels could act as an independent prognostic indicator (29). Elevated GGT levels have been observed to be crucial risk factor in a study of endometrial cancer survival biomarker which related with lifestyle (30). Mechanistically, in terms of tumorigenesis, the exact mechanism for correlating the elevated GGT levels and a vascular invasion with a lymph node involvement (31) remains unknown. It has been suggested that metastatic activity might be promoted by overexpression of GGT in melanoma, which regulates extracellular and intracellular GSH metabolism (32). It is possible that elevated GGT levels promote tumor growth by this method. While a large number of reports have confirmed the link between elevated serum GGT levels and tumor initiation, progression, recurrence, and metastasis, there is still an urgent need to further clarify the complete role of GGT in carcinogenesis (33). There were several potential limitations in this study. A portion of the patients were excluded due to incomplete data acquisition and the retrospective study design, and others were excluded due to alcohol abuse and hepatobiliary-diseases, which affected their serum GGT levels. Nevertheless, our results have significant clinical relevance.

To our knowledge, this study is the first to report the prognostic value of elevated circulating GGT levels in a large-scale population of lung cancer patients. Our findings confirmed that serum GGT levels play a crucial role in lung cancer susceptibility and can serve as a valuable prognostic indicator, especially in SCLC patients.

In conclusion, we designed this study to ascertain whether or not the GGT levels positively correlate with the occurrence of metastasis and risk survival. Our results demonstrated that GGT contributed to poor survival of lung cancer and was crucially informative in the prediction of metastasis and poor prognosis. Further research is needed to determine if an understanding of the mechanistic pathways of GGT might have potential value in lung cancer prevention.

Funding: This work was supported by the National Natural Science Foundation of China (document No. 81772478), and the Science and Technology Project of Chengdu (2017-CY02-00031-GX).

Ethical Statement: This study was approved by the Biomedical Ethics Committee Subcommittee in West China Hospital of Sichuan University.