Arsenic trioxide (As2O3) is a highly efficacious drug (1) and has been shown to be successful as a first-line treatment option in induction therapy for the patients with acute promyelocytic leukemia (APL) and as a maintenance therapy (2,3). Furthermore, As2O3 has also been reported to have anti-proliferative and proapoptotic activities in some solid tumors, including lung adenocarcinoma, hepatocellular carcinoma and cervical cancer (4-6). As a drug that has chemo-preventative qualities, As2O3 has been demonstrated to induce apoptosis through the generation of a reactive oxygen species and a superoxide compound (7,8). This leads to cell arrest through the processes of demethylation and alteration in the expression level of the cell cycle-related genes leading to cell cycle arrest (9), induction DNA damage, and the disruption of the mitochondrial transmembrane potential with the release of cytochrome c and caspase activation (10). However, As2O3 is a double-edged sword during cancer treatment. Its cardiotoxicity, neurotoxicity and other side effects (11-14) are a significant obstacle for further application. Side effects such as cardiotoxicity and neurotoxicity present a major obstacle for its use in a clinical environment.

3'-azido-3'-deoxythymidine (AZT) is a thymidine analogue, which has been shown to have antitumor effects against adult T-cell leukemia/lymphoma and pancreatic cancers. As Namba reported, AZT could resensitize the gemcitabine-resistant pancreatic cancer cells for gemcitabine via the inhibition of the Akt-GSK3β-Snail pathway (15). Accordingly, our previous results showed that As2O3 combined with AZT has significantly important synergistic inhibitory effects on the proliferation, migration and the invasion abilities of the HepG2 cells (16,17). However, the mechanism is still unknown.

Since As2O3 shows its cytotoxic activity only when entering cells, the arsenic carrier appeared to be an important player for modulating arsenic sensitivity. Previous studies have shown that aquaglyceroporin 9 (AQP9), which is mostly expressed in tumor cells and human leukocytes, was supposed to be related to the absorption of As2O3. This indicated that it has a critical role in determining the sensitivity of the tumor cells towards the As2O3 induced cytotoxicity (18-20). In acute myeloid leukemia cells, azacytidine facilitates the uptake of As2O3 by up-regulating the arsenic transporter AQP9 (21). Moreover, all-trans retinoic acid (ATRA) up-regulated AQP9, contributes to a significantly increased As2O3-induced cytotoxicity on combination with As2O3 (20). Chen and his colleagues found that AQP9 played a key role in the proliferation, apoptosis and metastasis of androgen-independent prostate cancer cells (22), which shows the same effects with our previous work in the HepG2 cells. Thus, we proposed that one of the mechanisms of synergism between AZT and As2O3 might be through a modulation of AQP9 expression.

The Cellular viability of the HepG2 and MHCC97H cells was assessed by the reduction process of MTT to formazan as described earlier (23). Cells were seeded into 96-well microtiter plates at a density of 1×104 cells/well with DMEM. After a period of 24 h, the culture medium in each well was replaced with a fresh medium and treated with a 2 µM As2O3 solution combined with different concentrations of AZT (0, 10, 20 µM) for an additional 48 h. Then, 10 µL of a MTT solution (5 mg/mL in PBS) was added to each well. After a 4 h incubation at 37 °C, the formazan salt crystals were dissolved in 100 µL of lysis solution (10% SDS in 0.01 M HCl). The absorbance (OD) values were measured spectrophotometrically at 490 nm using a microplate reader (Bio-RAD, Benchmark Plus, USA). Each experiment was performed in triplicate. The inhibition rate (IR) was calculated as follows:

Total RNA was extracted using TRIzol Reagent, according to the manufacturer’s protocol, and dissolved into RNase-free water. Then, 1 µg of RNA was reversely transcribed to cDNA. Afterward, AQP9 and β-actin mRNA were quantified by q-PCR using the SYBR Green Quantitative PCR kit following the manufacturer’s instructions. The primers for PCR are exhibited in Table 1. Reaction was carried out in a total volume of 20 µL for 40 cycles of 2 min at 95 °C, 15 s at 95 °C, 60 °C at 30 s and 30 s at 72 °C. The amplification reaction of AQP9 with respect to β-actin was analyzed with the comparative CT (ΔΔCT) method. Experiments were performed in triplicates.

Cells were collected and lysed in a RIPA lysis buffer (Solarbio, Beijing, China) containing phenylmethylsulfonyl fluoride (MP Biomedicals, Santa Ana, CA, USA). The concentration was determined using the BCA protein assay kit (Solarbio, Beijing, China). 50 µg of the total protein was separated by 10% SDS-PAGE solution and blotted at the target protein and the β-actin antibody on a polyvinylidene fluoride (PVDF) membrane. The membrane was blocked with a 5% skimmed milk powder buffer for 90 min, in Tris-Buffered Saline Tween, and then was probed with an anti-AQP9 in a 1:300 diluted solution or an anti-β-actin antibody in a 1:5,000 diluted solution in the TBST. After being rinsed 3 times with a PBS, the membrane was re-probed with a HRP-linked anti-rabbit IgG in a 1:10,000 diluted TBST. Results were intuitively observed by the Immobilon Western chemiluminescent HRP Substrate (Millipore Corporation, Billerica, USA), according to the manufacturer’s protocol. Experiments were performed in triplicates.

HepG2 cells were electro-transfected with AQP9 siRNA according to the recommendations. After being digested by pancreatic enzyme, the cells were collected, counted and adjusted for density to 1~2×106/mL, 200 rpm 10 min. The supernatant was then removed and the cells were resuspended in a 100 µL nucleofector solution. The experiential cells were divided into the mock group (the blank control, only added nucleofector solution), the AQP9 siRNA group (transfected with AQP9 siRNA) and the NC group (transfected with NC-siRNA which were marked by GFP). After transfecting, 500 µL of DMEM (preheated) containing 10% heat-inactivated fetal calf serum was added to the cup, then removed. The samples for the 6-well microtiter plates were cultured in a 5% CO2 humidified atmosphere at 37 °C. The transfection efficiency of AQP9 siRNA was detected by q-PCR and western blotting. The primers of AQP9-siRNA are as following: sense 5'-UGACCUCAACUACAUGGUUTT-3' and antisense 5'-AACCAUGUAGUUGAGGUCATT-3'.

At the 48 h post-transfection time, the above 3 groups of cells (5×104 cells per well) were moved into DMEM without FCS and the added drugs were then plated into the upper chambers of the transwell plates, and the medium supplemented with a 20% FCS was plated into the lower chambers. The membrane was fixed in a methanol solution, and then stained using hematoxylin after 24 h of incubation. Stained cells were visualized and counted under a light microscope (200×). The analysis of the cell invasion was consistent with that of cell migration. The cell invasion was detected using the Transwell assay with the Matrigel Invasion Chambers. Experiments were performed in triplicates.

The SPSS 19.0 software was used to perform comparative analysis of cell viability and the AQP9 expression by way of a one-way analysis of the variance. It was followed by a LSD-t-test, and all dates were presented as mean ± standard deviation (SD). The criterion of statistical difference was taken as P<0.05.

To explain the modulating effect of As2O3 and AZT in the HepG2 cells, a real time-PCR was performed to detect the expression of the AQP9 mRNA. As shown in Figure 2, As2O3 (2 µM) and AZT (20 µM) efficiently promoted the expression of AQP9 mRNA (P<0.05). A western blotting result showed that the combination of treatments also significantly increased the protein levels of the AQP9 group (Figure 3). These results indicated that As2O3 combined with AZT could up-regulate the expressions of AQP9 mRNA/protein. 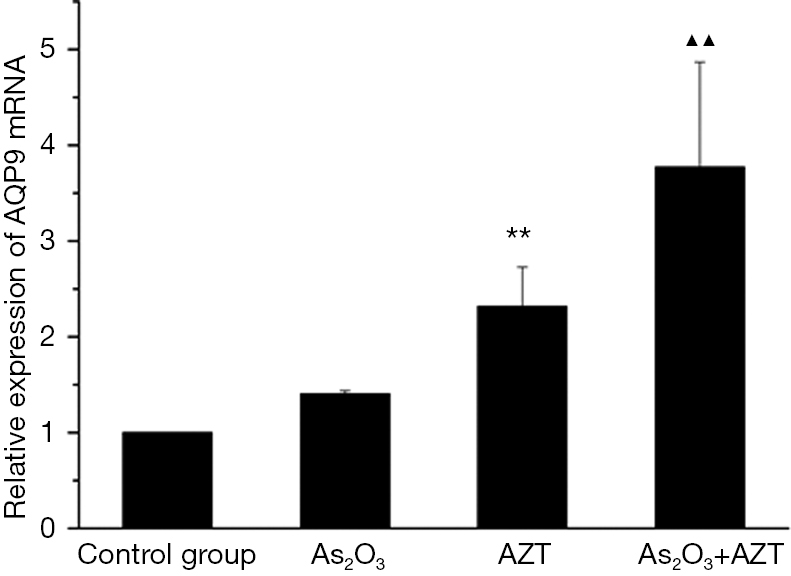 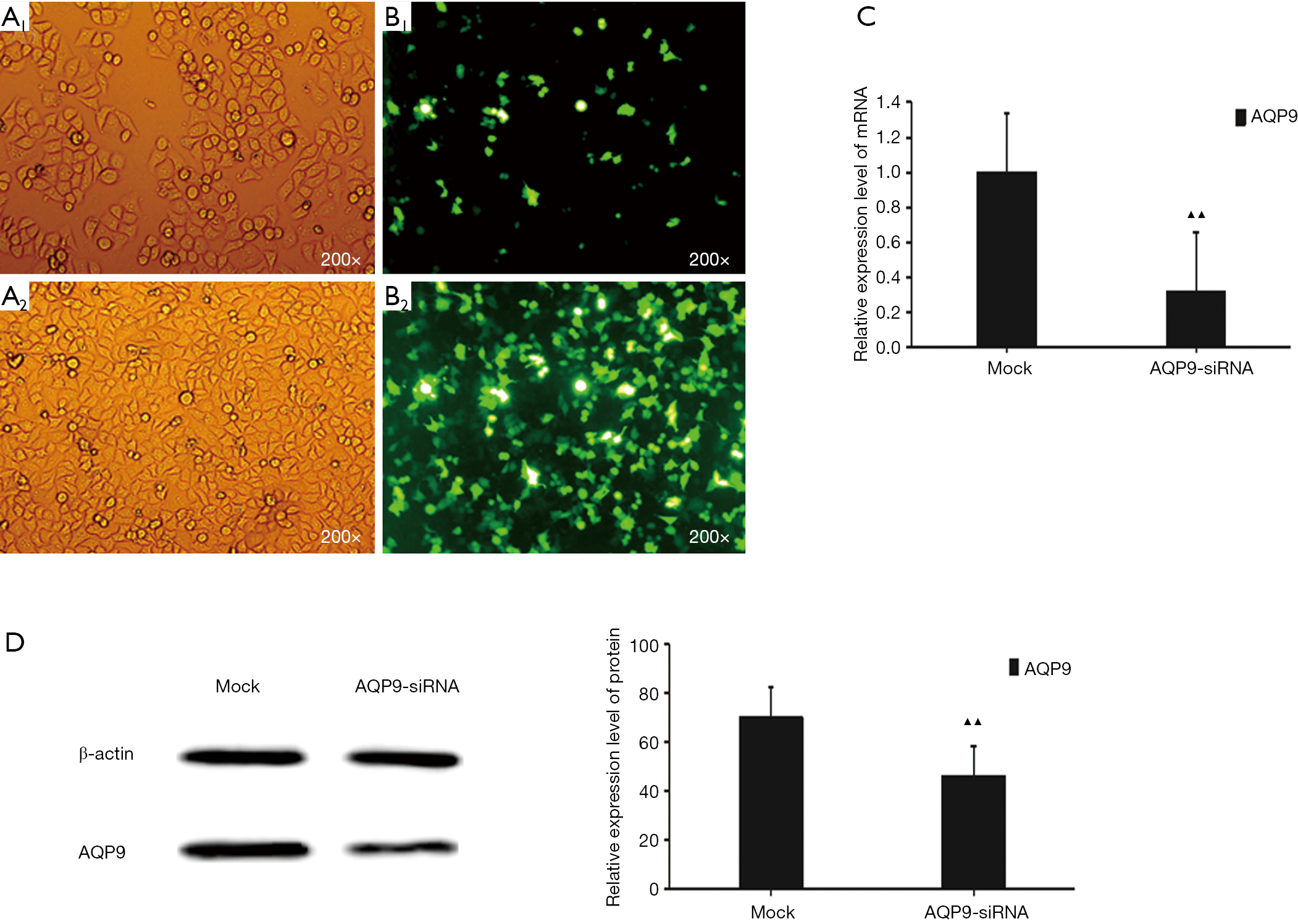 The effects of AQP9 on transversal migration of HepG2 cell

The results of the wound healing assay (Figure 5) showed that As2O3 combined with AZT could significantly inhibit the scratch healing ability of the HepG2 cell after a 24-h period. However, the effect was decreased after transfecting with AQP9 siRNA. Scratches in the blank control group basically healed 48 h after scratching. The scratch width of the AQP9-siRNA group was slightly narrower than that of the 24-h group, but there was no significant change in As2O3 when combined with the AZT group. These results indicated that As2O3 combined with AZT can significantly inhibit transversal migration of HepG2 cells, which may be controlled by AQP9. 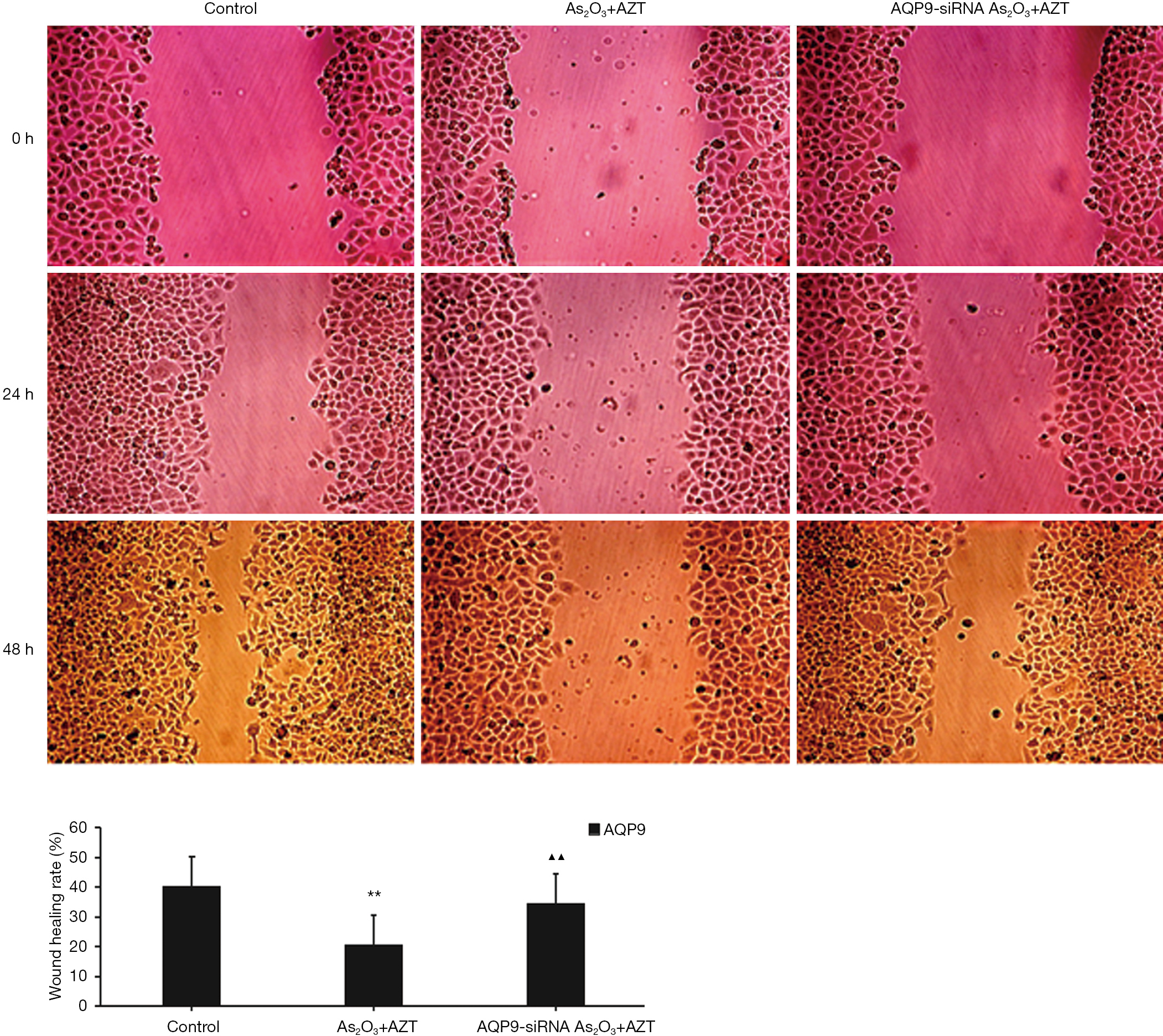 As Figure 6 illustrates, the number of transmembrane cells in the drug-treated group was significantly less than that in blank control group (P<0.01). However, the effect was reduced after transfecting with AQP9 siRNA. These results showed that As2O3 combined with AZT could significantly inhibit the longitudinal migration and the invasion of the HepG2 cells, which may be related to AQP9. 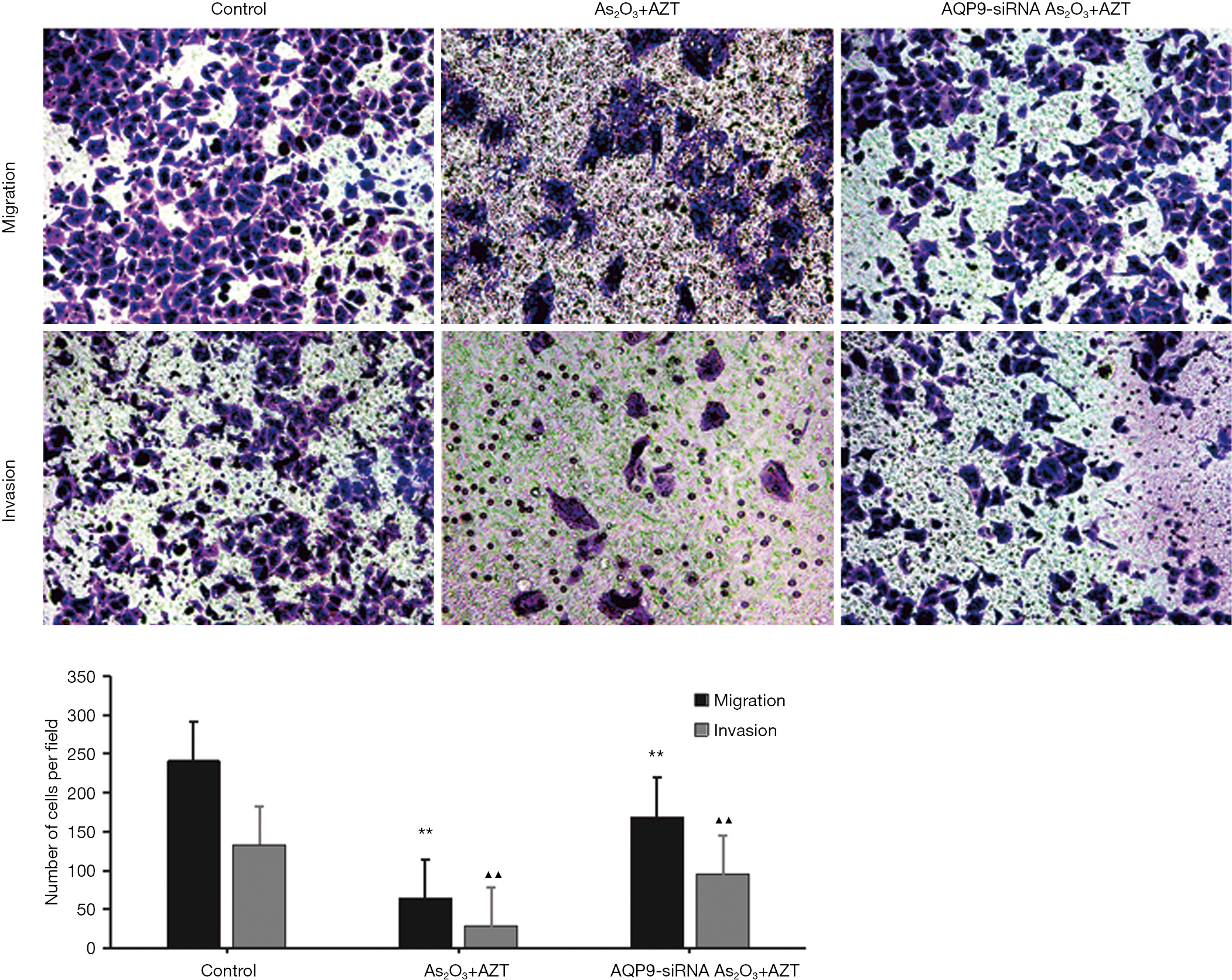 To date, reports have shown much progress in the antineoplastic combined chemotherapy protocols of As2O3 with other drugs. As a telomerase inhibitor, AZT inhibits the infinite replication potential in the z tumor cell proliferation by inhibiting the telomerase activity (24). Also, research has shown that the combined application of the AZT with emodin can co-inhibit the cell proliferation of leukemia KG-1a, which demonstrates that by constraining the activity of telomerase, Pt-AZT suppresses Bcl-2 expression and inhibits the growth of hepatocellular carcinoma in mice (25,26). Furthermore, our previous research found that the combination of As2O3 and AZT has a remarkable therapeutic effect on the liver carcinoma cell, HepG2 (8). However, its mechanism of action has not been published in the literature.

AQP9 is widely distributed in liver tissues, which plays a significant role in the physiopathology proceedings of the liver. Li and his colleagues found that AQP9 was down-regulated in the liver carcinoma cells when compared with normal liver tissues. Meanwhile, over-expression of AQP9 inhibited the proliferation of the SMMC-7721 liver carcinoma cells (27). Other research has indicated that AQP9 promoted the intake of some micro molecule neutral solutes such as monocarboxylic acid, 5FU, platinum, and As2O3 (28). Tang and his partner reported that the over-expressed AQP9 increased the effects of As2O3 on inhibiting proliferation, migration, and the invasion of liver carcinoma cells (29). Here, we found the excitation of caspase-3 was also enhanced, which is consistent with our previous study on cell biological behavior of As2O3 combined with AZT against liver cell carcinoma HepG2. However, Gao and his colleagues reported that melanoma cells had resisted chemotherapy and radiation when there was an over-expressed AQP9 (30). These conflicting results were probably due to the effect of AQP9 being dependent on different types of cells.

In the present studies, we found that the proliferation inhibition rate of the combination of As2O3 and AZT on the hepatocellular carcinoma cells was significantly higher than As2O3 alone, and it had a dose-dependent effect for AZT. In addition, a low dose of As2O3 combined with AZT also significantly inhibited the migration and invasion of liver cell carcinoma. Furthermore, as shown by the results of qPCR, the expression levels of AQP9 in combination of As2O3 (2 µM) and AZT (20 µM) group were higher than those of As2O3 alone groups, as well as the blank control groups, which was also verified by the western blot test results.

To further investigate whether AQP9 plays a key role in the process of the combination of As2O3 and AZT against hepatocellular carcinoma cells and thus improves the treatment efficacy, the expression of AQP9 was silenced by electro-transfecting HepG2 cells with AQP9 siRNA. The results of the wound healing assay showed that the scratch width of the AQP9-siRNA group was dramatically narrower than that of As2O3 when combined with the AZT group. In addition, the number of transmembrane cells in the AQP9-siRNA group was significantly more than that of As2O3 combined with AZT group. These results suggest that AZT may increase the sensitivity of the hepatocellular carcinoma cells to As2O3 by up-regulating the expression of AQP9.

In conclusion, our study shows that As2O3 combined with AZT can co-inhibit the growth, migration and invasion of hepatocellular carcinoma cells by up-regulating the expression of AQP9. This has important implications in reducing the poisonous side effect of As2O3 in the cancer therapies.

The authors thank AME Publishing Company for English editing on this study.