Colorectal cancer (CRC) has become the second most common cancer in females and the third most common cancer in males (1). In China, mortality caused by CRC was estimated to reach 191,000 in 2015 (2). Most CRCs arise from preexisting adenomatous or serrated polyps, and the liver was the most common site of CRC metastasis (3). According to liver metastasis (LM) time, CRC LM can be divided into synchronous liver metastases (SLM) (simultaneously occurring liver metastases) and metachronous liver metastases (MLM) (liver metastases occurring 6 months after radical resection). Reports show that approximately 20–25% of CRC patients are initially diagnosed with SLM, and approximately 50–60% of the patients developed MLM after primary tumor resection (4,5). Unfortunately, approximately 75% of patients will experience recurrence within 2 years, after liver metastases resection (6). Patients with SLM are thought to have a less favorable prognosis and easy to relapse than those with CRC alone (4-6). Although it is not clear which liver metastases are more prone to recurrence, CRC patients with SLM are considered as a less biologically favorable group. Therefore, it is extremely important to find effective markers to identify SLM and MLM.

Exosomes, containing microRNAs (miRNAs), DNA, and/or proteins, are small homogenous membrane vesicles that released by cells in both physiological and pathological situations, and involve in tumor growth, metastasis, and therapy resistance (7,8). Therefore, exosomes have the potential to be utilized as cancer biomarkers. MiRNAs are short, noncoding RNAs that play important roles in many biological processes, including cell apoptosis, proliferation and differentiation (9). Dysregulation of miRNAs contribute to the tumorigenesis, progression and metastasis in a variety of cancers and also can be use as biomarkers for early diagnosis, prognosis and prediction the sensitivity of tumor to clinical treatment (10). Our previous research found that miR-196b-5p was upregulated in CRC tissues and upregulation of miR-196b-5p was associated with poor survival in CRC patients (11). Especially, miR-196b-5p was detected at significantly higher levels in the serum exosomes of CRC patients compared to the healthy control subjects (11). Thus, we want to further explore whether miR-196b-5p is related to LM.

Serum samples from CRC patients were obtained at Clinical laboratory in Jiangmen Central Hospital (Guangdong, China) between April 2011 and September 2012. All cases were diagnosed as CRC by preoperative colonoscopy and postoperative pathological diagnosis. No adjuvant therapy, such as neoadjuvant chemotherapy and radiotherapy, was used before operation. Serum samples were collected after diagnosis and before operation, and stored at –80 °C. All cases were followed up for 5 years to determine whether or not liver metastases occurred after the operation. According to the follow-up results, 49 cases of CRC patients with NLM, 51 cases of CRC patients with SLM and 50 cases of CRC patients with MLM were included in this study. The pathological characteristics were detailed in Table 1. In addition, 100 cases of serum from healthy volunteers (HV) were collected as controls during the same period (Table 1). 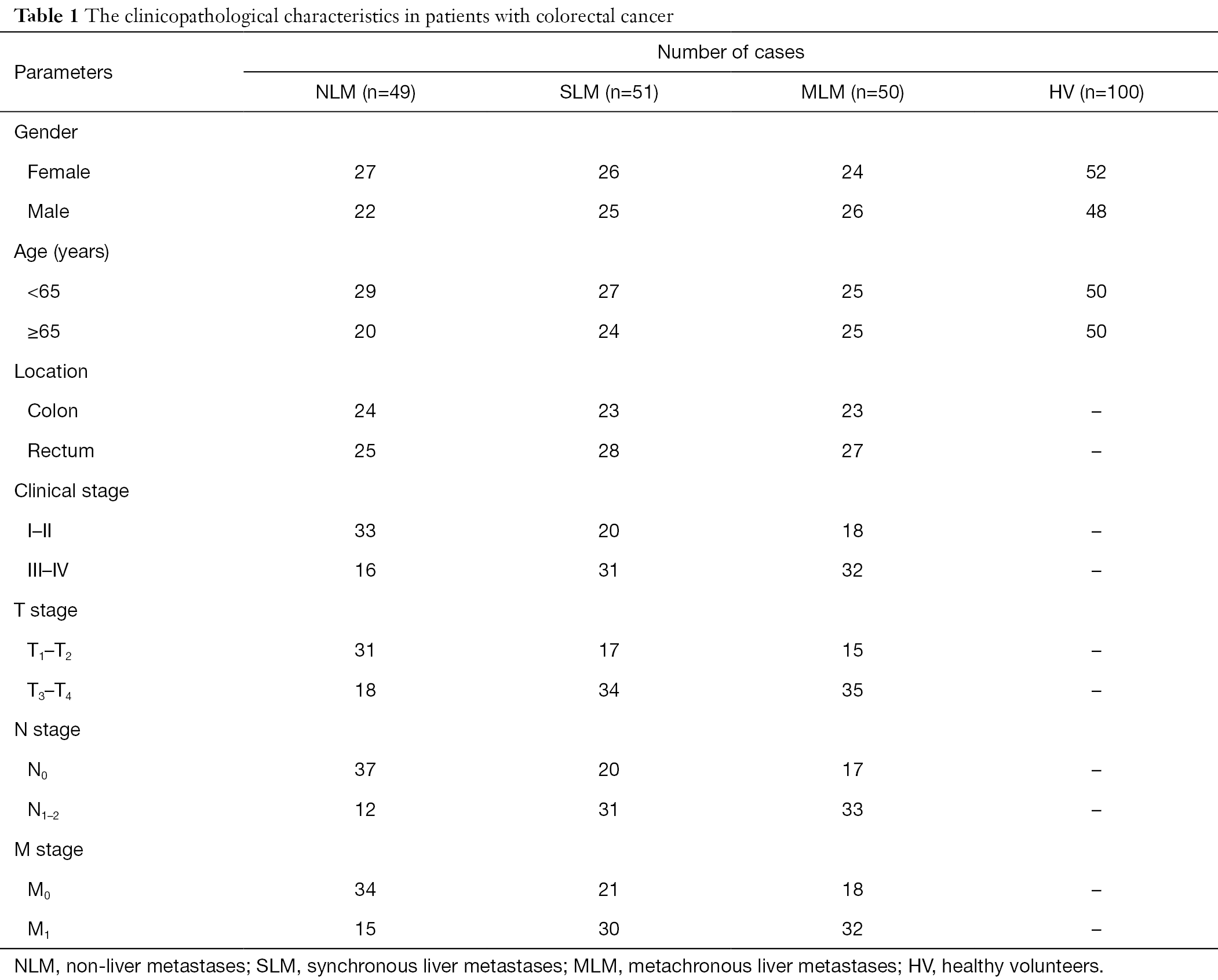 The exoEasy centrifuge column filtration method was used to separate the serum exosome, and the specific operation was carried out according to the instructions. The exosome RNA of serum without hemolysis was extracted according to the operation instructions of the exoRNeasy Serum/Plasma Midi kit (QIAGEN China, Shanghai, China). miRNA was reversely transcribed from total mRNA using the Revert Aid First Strand cDNA Synthesis Kit (Thermo Fisher Scientific Inc., Waltham, USA) according to the manufacturer’s protocol. Complementary DNA (cDNA) was amplified and quantified on CFX96 system (Bio-Rad, Redmond, USA) using iQ SYBR Green (Bio-Rad, Redmond, USA). Primers for U6 and miR-196b-5p (Cat#: miRQ0001080) were synthesized and purified by RiboBio (Guangzhou, China). U6 was used as endogenous controls. Relative fold expression was calculated with the comparative threshold cycle (2−ddCt) method.

CEA, CA199 detection kit and COBAS e 602 instruments were provided by Roche (Basel, Switzerland). The detection method was electrochemiluminescence, and the specific operation was carried out according to the instructions (12).

SPSS 20 statistical software was used to analyze the data. The data of non-normal distribution was represented by median (four quantile interval). Mann-Whitney U test and t-test were used between the two groups. Kruskal-Wallis H test was used in comparison among multiple groups, Spearman was used in correlation analysis. Survival curves were plotted using the Kaplan Meier method and compared by log-rank test. P<0.05 was considered significant.

Higher levels of serum exosomal miR-196b-5p was related to unfavorable clinicopathological features in CRC patients with NLM, SLM or MLM

Consistent with the results we reported previously in CRC tissues (11), we also found that the relative expression of serum exosomal miR-196b-5p in III–IV stage, T3–T4 stage, and N1–2 stage CRC patients were correspondingly higher than I–II stage, T1–T2 stage, and N0 stage CRC patients, respectively, whether the patient has liver metastases or NLM (Table 2). 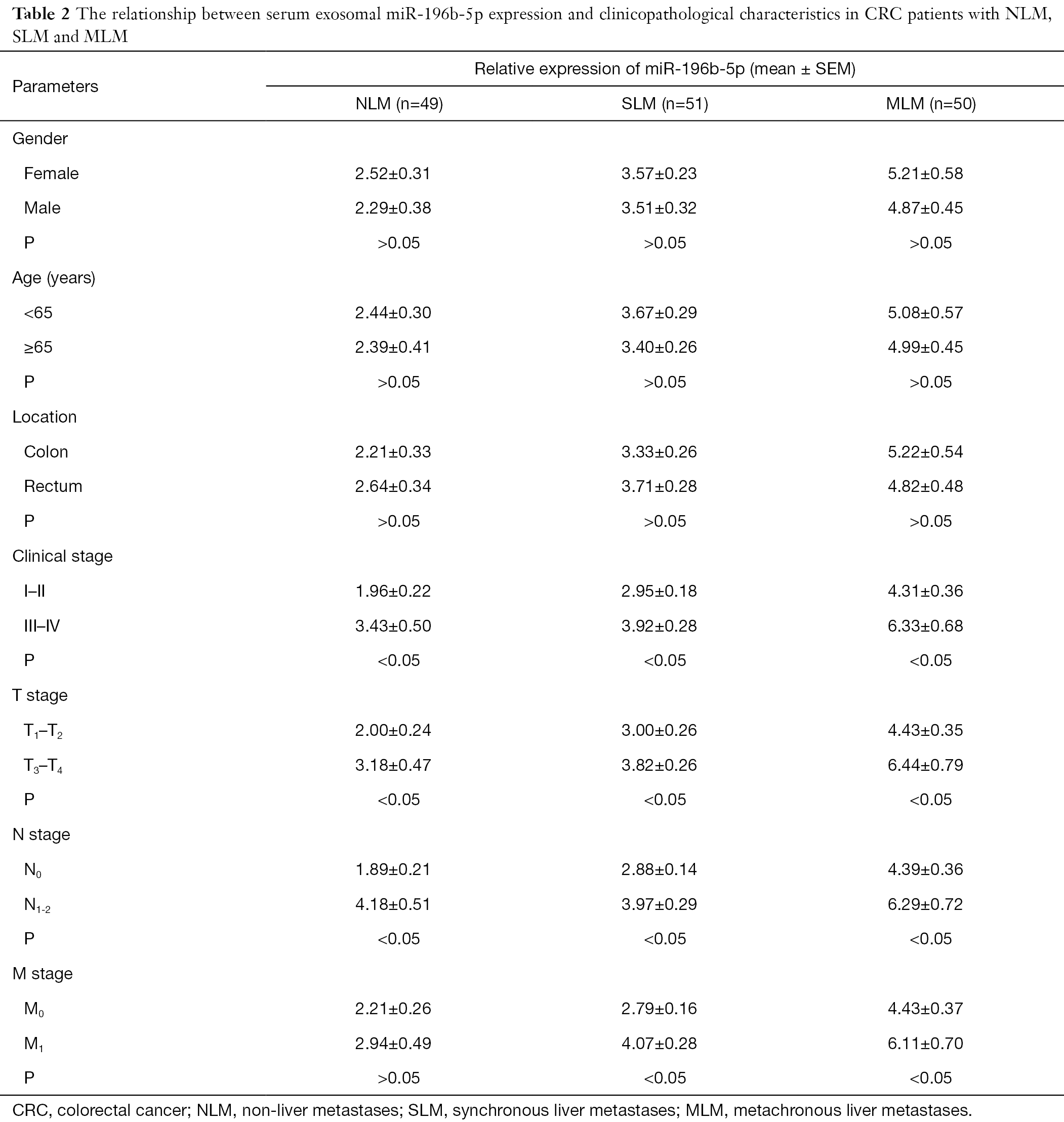 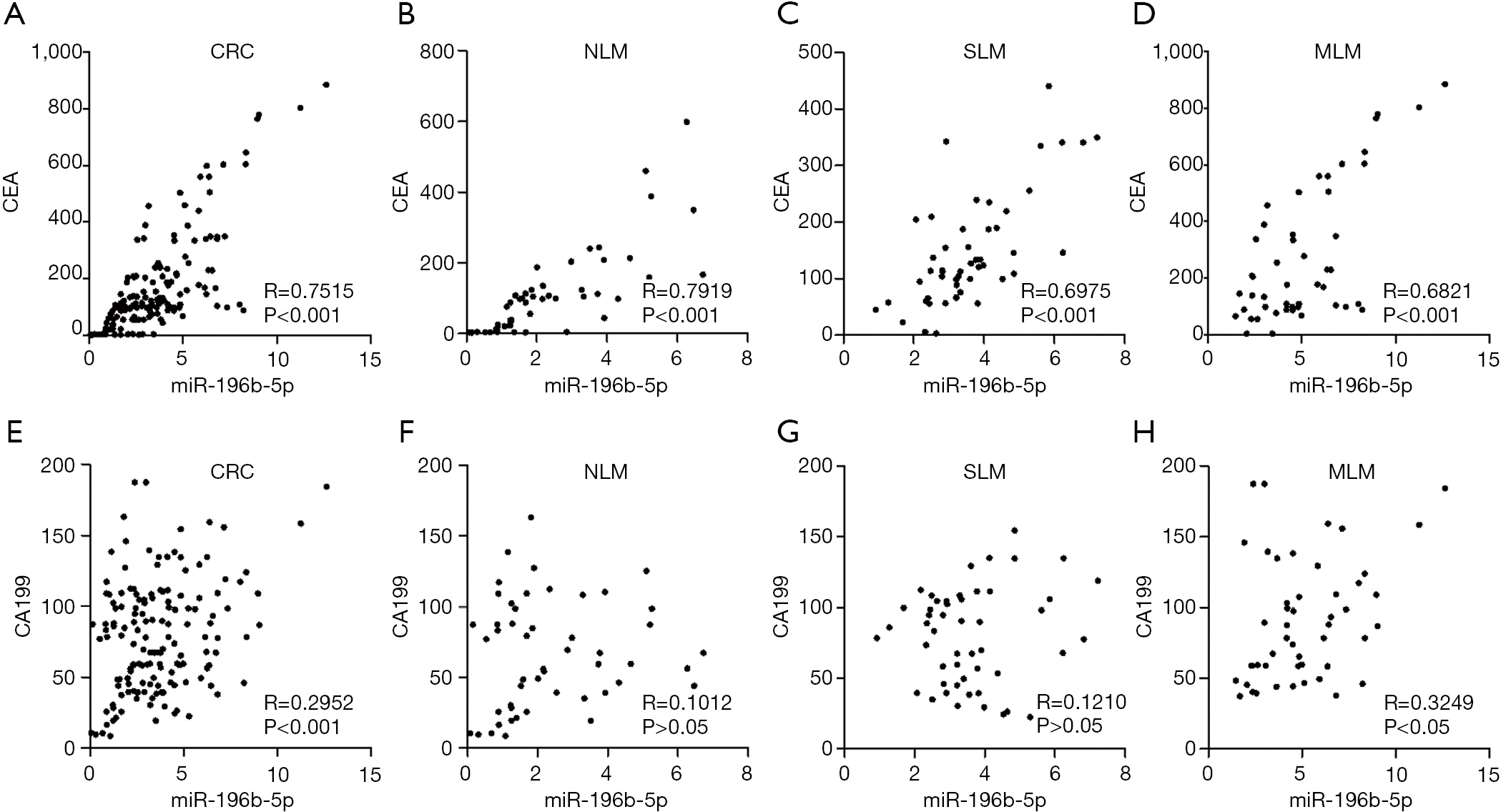 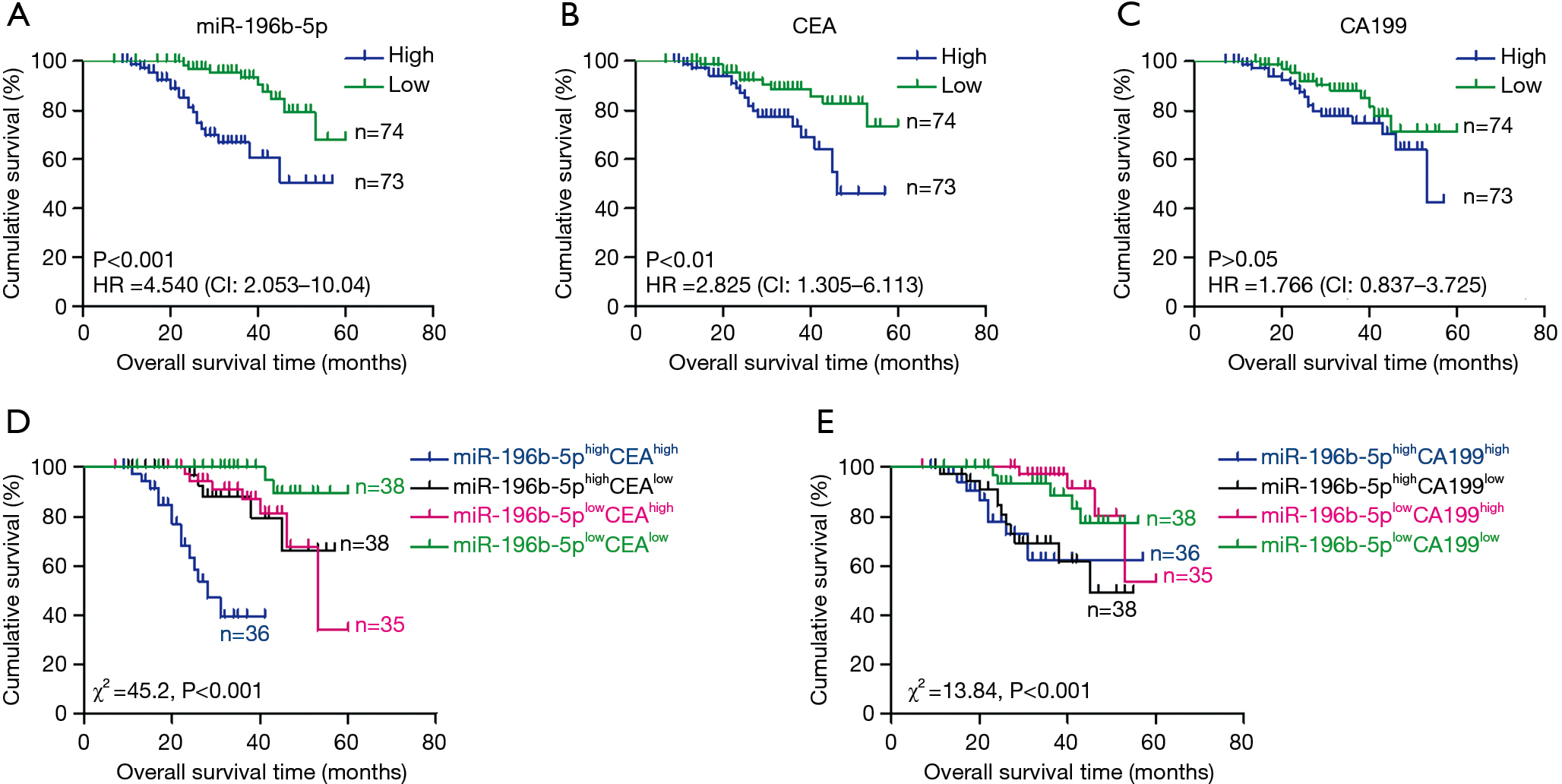 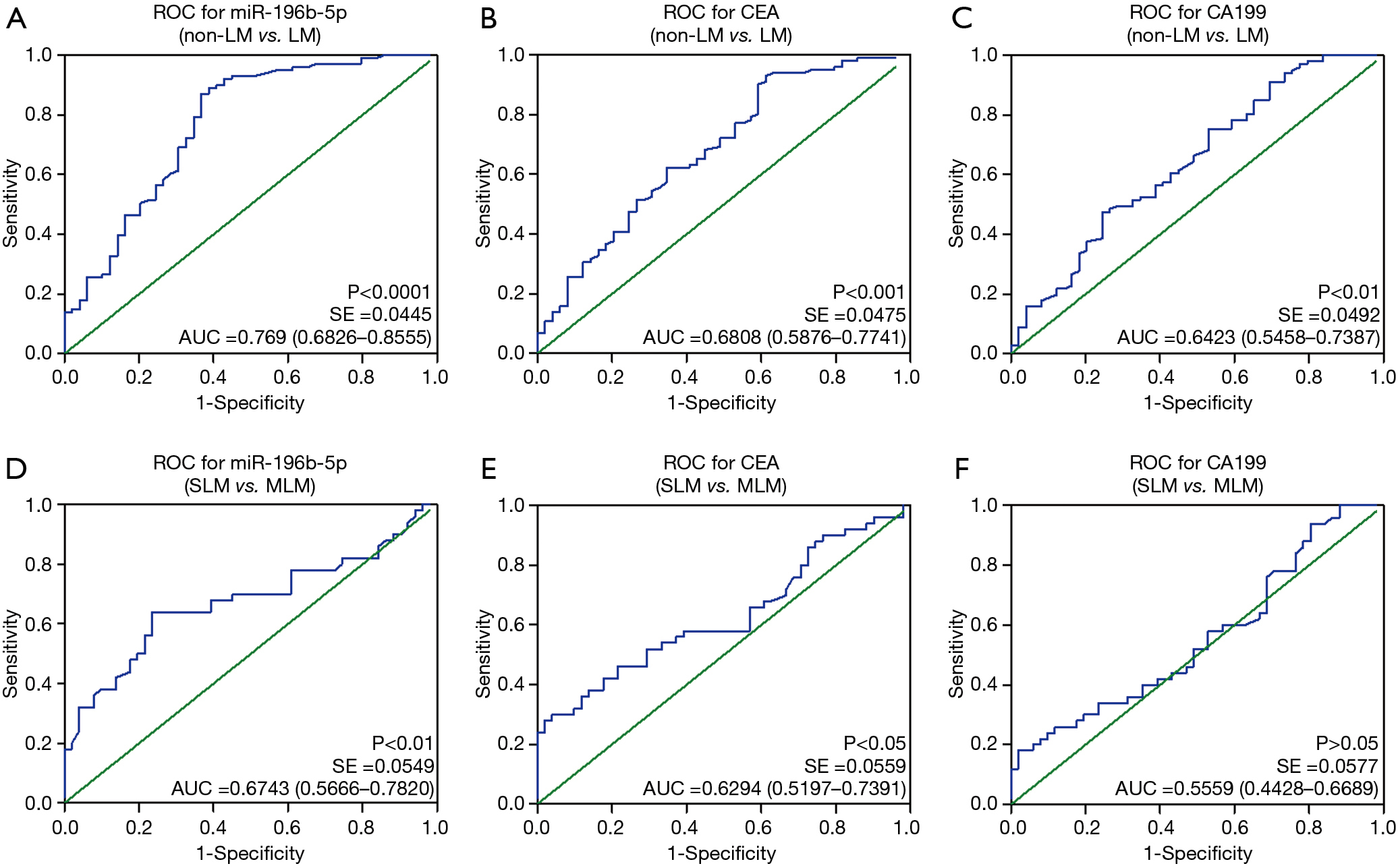 miRNAs of different cell types can be secreted outside the cell and then enter peripheral circulating body fluids such as blood. According to reports, 10% of known human miRNAs can be detected in plasma (13-15). These detectable miRNAs in plasma or serum have a very stable form that can be encapsulated into the extracellular vesicles (apoptosis bodies, macrovesicles), or bound with special lipid proteins and are resistant to RNase activity (13,16). At present, miRNAs as biomarkers are mainly derived from tissues and circulating fluids, including plasma (or serum) and feces. Abnormal expression of miRNA is closely related to LM of CRC patients (17-20). Perilli et al. found that miR-182 was significantly overexpressed in both primary and LM CRCs, compared to normal tissues (17). They also found miR-182 alone or in combination with its target genes (ENTPD5, TSP-1, and PDCD4) may serve as prognostic markers to monitor the relapse in CRC patients (17). By comparing serum miRNA expression in CRC patients with LM and NLM, Wang et al. found that miR-29a expression significantly increased in patients with LM (18), and Yin et al. confirmed that serum miR-126, miR-141, and miR-21 levels were closely related to the early onset of CRC patients with LM (19). Additionally, elevated plasma miR-141 levels also predict poor prognosis in CRC patients. Meanwhile, miR-141 combined with CEA improved the diagnostic accuracy of CRC (19,20).

Taken together, our results indicate that serum exosomal miR-196b-5p could be a good diagnostic marker for CRC patients with MLM. Although miRNAs have reliable stability and have good prospects in detecting liver metastases, the high cost and long latency of serum miRNAs are the limitations of miRNAs as blood-based diagnostic markers for screening purposes. Therefore, we still have a long way to go in the research of miRNA, but the prospects for the future are bright.